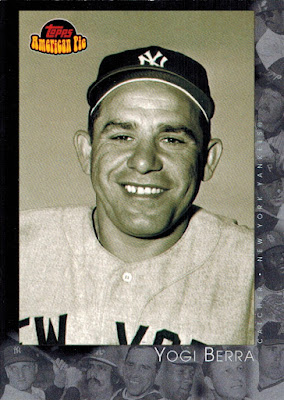 Yogi Berra would have turned 93 today.

Yogi is, first and foremost, a Hall of Famer and arguably the greatest catcher in baseball history. But he's also something that's all but extinct today's game: a quotable ballplayer. Every time I hear a guy say "I just took it one pitch at a time" for the hundredth time, I think of Yogi Berra. ("When you come to a fork in the road, take it" is a personal favorite Yogi-ism.)

And so it's in honor of the late great Yogi that I've decided to focus on him in this week's Top Five post. 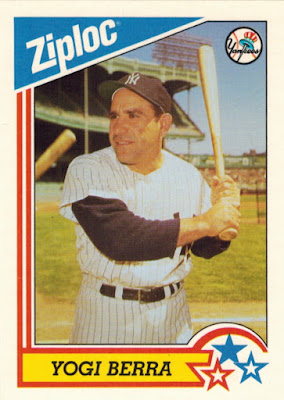 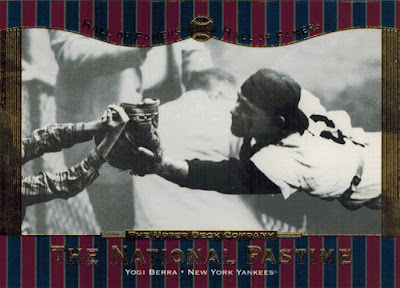 Quirky action shots are rare on the cards of '50s-era ballplayers -- this is one of the extreme few I own. It seems to me that Yogi doesn't appear in nearly as many modern sets as he should, and that's a real shame for someone who has the propensity for creating absolutely beautiful cards like this one. 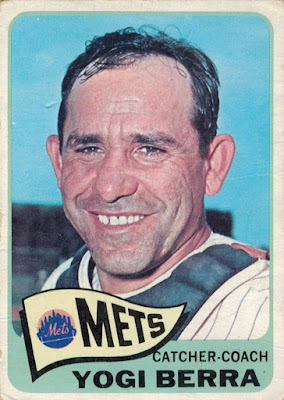 From personal experience, I'd say Yogi's vintage in particular is often expensive and/or difficult to find, a bit more so than most stars of his era.

This is Yogi's sunset card (as well as an extreme Short Term Stops sighting given Yogi's brief four-game stint with the lowly '65 Mets), and it's been a coveted piece of my collection from the day I swung a forum trade for it many years ago. 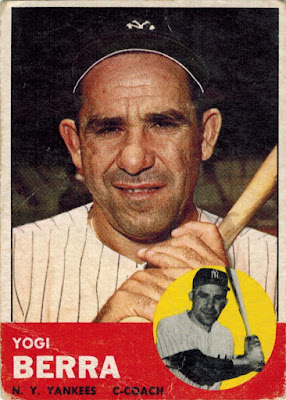 This is my only real vintage card of Yogi as a Yankee (a wonderful present from Dad a couple years ago), and for that reason it remains my favorite.

Like the '65 Topps, it features a rare "Catcher-Coach" designation, and I can't help but wonder how awesome it would be if Topps did that with veteran-leadership guys like Chase Utley or Ichiro nowadays.

It's a bit shocking to me that I've never found a vintage Yogi at a card show, and sometimes I get to thinking I never will -- but like Yogi himself once said: It ain't over till it's over.
Posted by Nick at 2:28 PM

That Turkey Red card almost looks like Yogi is balancing his mask on his head for some reason!

Love all five of these Nick! I can't believe I'd never seen that Turkey Red gem before (he says as he goes off to look for one on COMC).

That 2010 Turkey Red is fantastic! I think my favorite card of Berra is his 56T card. Actually... I think that's the only vintage card I own of him.