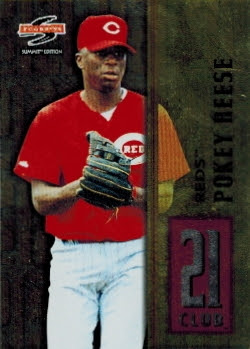 For the first time since I started collecting, I'm seriously worried we've begun to enter into another overproduction era.

Those of you on Twitter probably know this by now, but everyone and their moms are going ballistic over 2018 Bowman. First came the freak-out about how no one could find any, shortly followed by the freak-out when all their Targets/Walmarts seemed to simultaneously restock them (along with new retail-exclusive Mega-Boxes -- I'm still not clear whether they were planned by Topps all along or created in response to such high demand).

Okay: if people want to spend fistfuls of dollars on a wildly outside shot at an Ohtani auto (because you know that's what they're chasing), then let them. It may not be the way I'd personally spend my own money, but so be it. I'm not trying to come off as some curmudgeon here.

But I'd be lying if I didn't say this retail insanity didn't leave me just a bit worried about the future of our hobby. 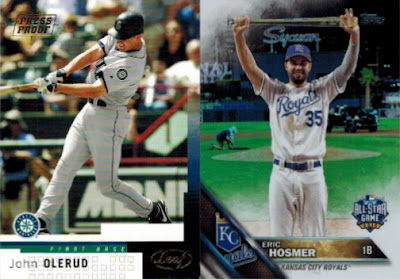 I wasn't around at the time to witness it, but what's starting to happen now reminds me a lot of the tales I heard about the dreaded Overproduction Era of the late '80s/early '90s.

High demand produces high supply. Though I have no proof, it certainly does seem like more cards are being printed these days. And if that's the case, then something has to give -- either demand or supply. Eventually (I would think), Ohtani is going to cool off and/or people are going to stop plunking down hundreds of dollars with no big hitz to show for it.

Honestly, I have a hard time fathoming buying that much retail in what is basically the pursuit of a single card. To each their own, as they say -- but I'll stick to trading as my main source of cardboard. I sit here at home, my cash in the bank, and still I get cards I need from people like John of "Johnny's Trading Spot" fame who recently dropped some Christmas in May packages around the blogosphere, one of which found its way to my humble abode.

Among the goodies were the Pokey Reese at the top of this post (a collection to which John has contributed more than anyone else) and these two parallels above -- the Olerud (numbered to just 25) now becoming the rarest item in my collection of his. 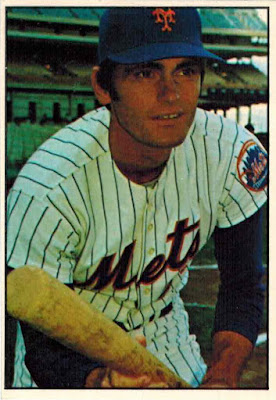 Because I'm so behind in posting trades, I actually had some cards I received from John earlier in the year sitting in my scan folder before his Christmas in May mailings.

Included in that first package was a card that takes its place as one of the older Pitchers at the Plate in my collection with this elusive '75 SSPC Sample of former Met hurler Harry Parker. 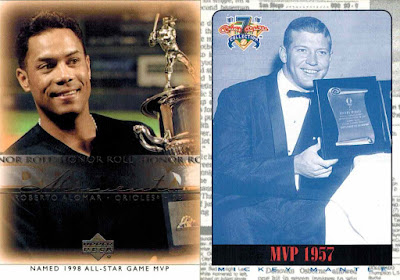 A couple superstars for my Awards mini-collection. 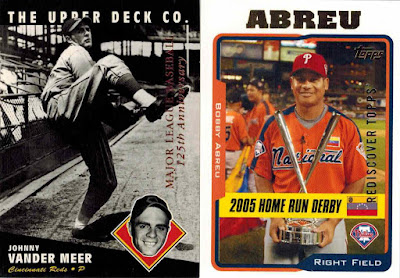 While they won't win any points for excitement, stamped parallels are indeed different than their original counterparts, so into the binders they go. 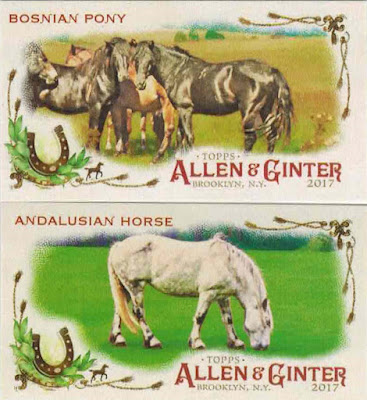 Who leaves a country packed with ponies to come to a non-pony country? 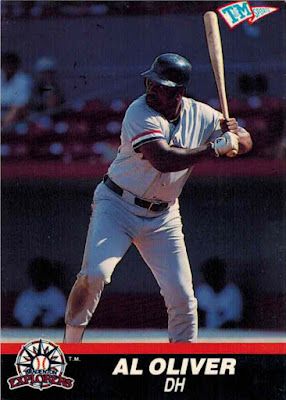 Normally, I don't encourage people to send me overproduction-era cardboard because the name of the age itself should tell you that I have most of what I need from those years by now. But these Senior League singles seem to be some of the best items from the time that are a) cool in an offbeat way, b) not massively produced, and thus c) still welcomed in my collection here in what could be the start of the Second Overproduction Era here in 2018.

I only use the term semi-seriously, but yes, a part of me is actually scared that we're entering into that Second Overproduction Era now -- I only hope it doesn't get to the point where, years from now, people are saying: Remember when we bought all that 2018 Bowman and thought we'd be able to retire on that Ohtani guy's autograph? What fools we were!
Posted by Nick at 5:41 PM

i can't help but wonder how many bowman chasers have overspent hoping for the big pull that would net them hundreds of dollars or more. i enjoy trade packages like those John just sent around. there's always an element of surprise that tops most any pack out there!

It certainly feels like there are a lot of cards being printed. I've wondered the same thing. At any rate, cards don't feel as scarce as mid 2000s.

WE ALL HAD PONIES!

Even if Topps went back and printed another run of Bowman (which I doubt), production numbers on Flagship and Heritage at least were reportedly reduced this year. One thing you might not be taking into account is that, generally speaking, "supply" seems to be greater because, generally speaking, "demand" is way down. Sure, there's a new crop of "speculators" (or the old crop back at it). But kids don't collect anymore. Card collectors are aging and getting out (or passing away) and not being replaced by a new generation. Topps, in particular, is struggling financially. Hard to believe, but true.

Anyway, you have no idea what it was like in the late 80s and 90s. "Everyone and their moms" were buying full CASE after full CASE, then--not just stalking Mega-boxes at Target. Take whatever you THINK is happening today and multiply it by the thousands. And people weren't even chasing numbered autographed inserts...just regular cards. It wasn't at all unusual for just your average neighborhood collector to buy a "brick" of 1000 Jose Canseco rookie cards (or whomever). Most, at least, would buy a brick of 50 or 100. If someone were to collect up all the unopened Topps flagship from '87 or '88 or '89 (for example), he could probably give each person currently collecting three free cases and not put a dent in that which he had gathered up. Nothing today remotely comes close.

The Al Oliver card is so sweet. Is there such a thing as under-produced cardboard from the overproduction era? If so, I think this one would qualify.

The worst thing about the whole Bowman thing is not that they may be overproduced, but is that I would figure a ton of the unwanted base cards are just getting discarded when there are a bunch of collectors like me who would love cards like that, or even just a team set or two. I wish there was a way for unwanted cards from case breaks to get into the hands of people who could actually use them instead of them getting throw out.

When I was a little girl in Poland, we all had ponies. My sister had pony, my cousin had pony, ..So, what's wrong with that?