Ghosts of flea markets past 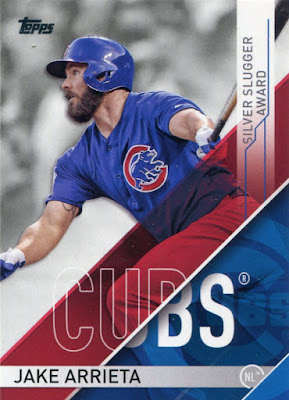 There comes a time when you just have to accept the fact that certain things are changing from the ways they used to be.

This is true with a few areas of my life right now, but the one most relevant to this blog involves my local flea market. Longtime readers of mine might remember the hauls I'd bring home from the place. My regular vendors had dime boxes as far as the eye could see and offered me discounts I still can't quite believe to this day.

I'm sad to say that the local flea market is probably past its glory days, and perhaps it's time I finally accepted it. I spent a sunny Sunday afternoon there a couple weeks ago, only to find absolutely none of my once-regular vendors in attendance. Ghosts of baby toys and board games occupied the spaces where their tables were usually found, locations I knew by heart.

I did, at one point, stumble upon a vendor with cards amongst his rows of Van Halen CDs, and while it certainly wasn't the greatest deal in the world, I decided to plop down a buck for this rare-present-day "pitcher at the plate" shot of Jake the Snake. 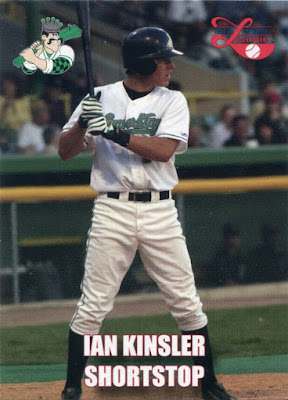 Sure, there were quite a few people with cards during this flea market run: trouble was, the vast majority were civilians who thought their 1989 Topps Jamie Moyers were worth five dollars.

About halfway through, I found a guy who had a handful of minor league sets in a small box at three bucks a pop. I asked him if I could open them to see what kind of guys were included, and he bluntly refused. (They were housed in your standard, unsealed team bags, mind you, so I'm not wrong in being a little peeved at this, am I?)

While I don't much like to make blind purchases, I noticed (then) future star Ian Kinsler on the front of one of the sets and figured there might be a couple more names amongst the rest of the checklist. 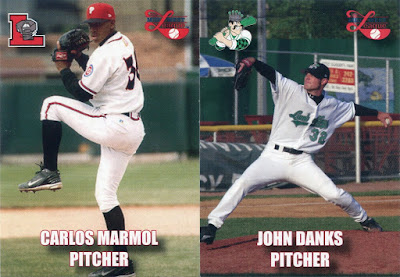 I asked the guy if he'd take five bucks for two of the team bags, and he accepted.

Best I can tell, the cards I purchased are from a couple different 2004 Midwest League All-Star sets, and fans of Chicago baseball should recognize the two names above. Carlos Marmol is seen here during the days when only minor league fans had to suffer through his three-walk, three-strikeout saves.

John Danks is pictured during his brief time in the Rangers' system before he came over to the White Sox, where he'd enjoy a few decent seasons before falling off the face of the earth sometime around 2014. 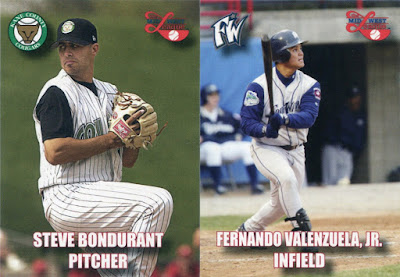 I have no idea who Steve Bondurant is (he never made it past Triple-A), but the Kane County Cougars logo brings back fond memories of games I used to attend with my grandparents as a kid when they lived in the next town over from Kane County, Illinois.

Count me among the many who never knew Fernando Valenzuela had a kid who played professional baseball (he's actually still kicking in the Mexican League at the age of 34). 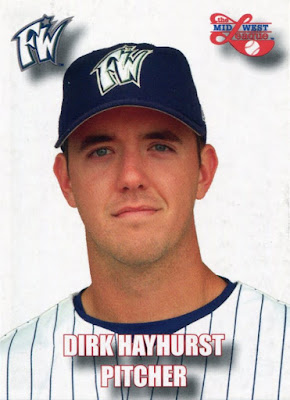 It doesn't look like much to the casual observer, but this card singlehandedly made the five dollars I spent on these sets worth it.

Dirk Hayhurst never did much on the diamond. He spent a grand total of 25 unspectacular games in the big leagues with the Padres and Blue Jays in 2008-09. Book lovers might recognize the name, however: Hayhurst is the author of a trio of baseball memoirs, most notably The Bullpen Gospels.

I personally think the whole tell-all minor league memoir thing has gotten a bit old by now, but Gospels is terrific and worth reading if you haven't already (as are the other two in the series). What makes this card so special is that -- aside from an appearance as the Garfoose in 2011 A&G -- Hayhurst was never featured on a major-brand baseball card, and this is the first and only one I've been able to add to my team binders. 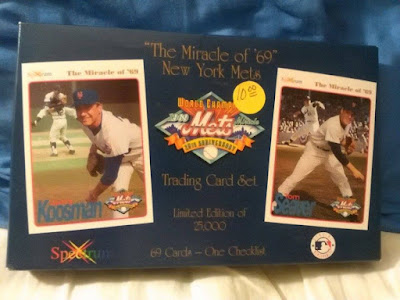 Despite my nostalgia for flea markets past, my recent trip did have one surprise left in store: this 69 (dude) card oddball set featuring the Miracle Mets of 1969, released by a company called Spectrum (beats me) in 1994.

As you can see, the vendor who had this on display wanted ten bucks for it. I wanted the set, but not for a Hamilton. I asked if he'd take five on it, and -- in a rare display of my haggling skills -- he accepted.

One wrinkled Lincoln later, and the Miracle Mets were mine. 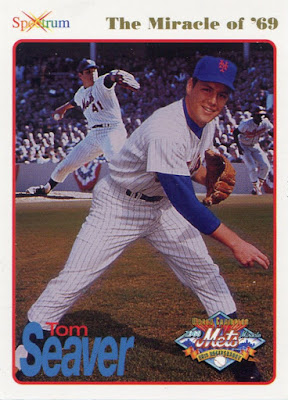 The cards were still in the shrinkwrap when I opened the box, so I knew I indeed had the entire un-cherrypicked set intact from the get-go.

The first part of the checklist focuses on single players from the Miracle Mets depicted on a clean design: posed shot in the front, action shot in the back.

The most notable of the bunch is Tom Terrific, the 1969 NL Cy Young winner who was well on his way to a Hall of Fame career. 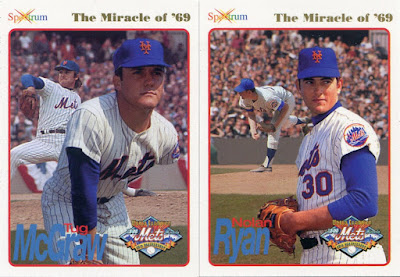 A couple of the young Miracle Mets wouldn't achieve stardom until their later years, notably Tug McGraw and Nolan Ryan.

I personally tend to picture Tug during his time with the Phillies, and Ryan was infamously dealt to the Angels a few years after the '69 season before he could ever really shine in New York. 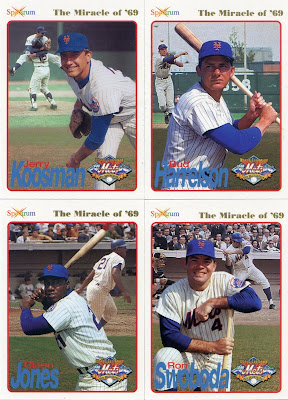 While the Seavers and Ryans are great, my favorite part of this set is the inclusion of the more fan-favorite type of guys who don't often get recognized on cardboard.

Koosman, Harrelson, Jones, Swoboda: the Mets wouldn't have performed the miracle without them, plain and simple. 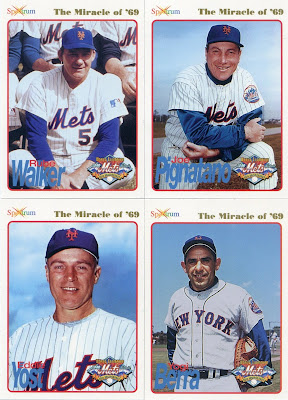 There's Yogi in the years before he'd take over as skipper for the Mets, and I had no idea former third base star Eddie Yost coached after his playing days. 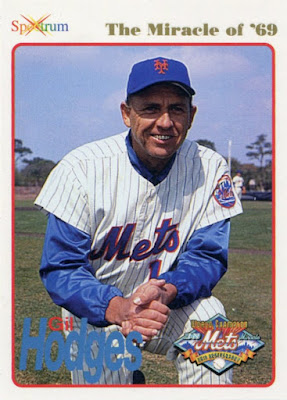 Then there's the man at the helm of it all: Gil Hodges.

Gil was, by all accounts, a great skipper and an even better man, and when you pair his accomplishments as both a player and manager together, I think he's one of the more glaring Cooperstown snubs. 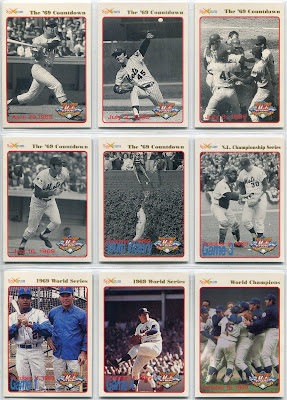 The second part of the checklist features key moments from the '69 season, with scores of cool photos to boot. 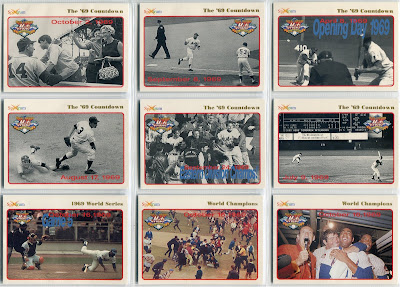 And here's some horizontals.

The World Series shots, oddly enough, are the only ones in color. 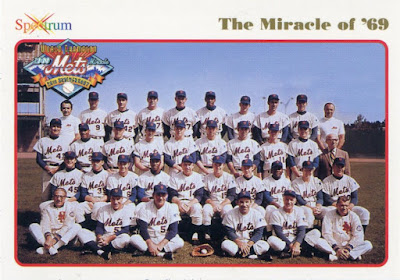 Though they stomped on my beloved Cubs on their way to the title, I've always been a big fan of the Miracle Mets.

They're right up there with the "We Are Family" Pirates, the Reds' "Nasty Boys", and Boston's "Idiots" as one of the more fascinating clubs ever assembled, and I'm ecstatic to have a set documenting that magical season in the Big Apple.

Yes, the glory days of the local flea market may be gone. But that's no reason to mope about the past, especially when, with a little digging, there are still a few cardboard gems to be found in all those aisles of knick-knacks. When you take it all together, I certainly can't complain with the haul I came home with a couple Sundays ago.

In the end, I guess you have to make do with what you can.
Posted by Nick at 7:05 PM

Love the Mets and the Hayhurst...hope the regulars make an appearance at a future visit!

Glad to see some former Clinton Lumberkings represented! Attended a game at Kane County two years back; what a lovely stadium

I'm right there with you. Wrote about taking a hiatus at one of my longtime favorite flea markets a few weeks ago. It's no longer worth the time. Ironically... my buddy wanted to go this past weekend, so I took a break from my break... and miraculously found a pair of decent deals. I guess you never can truly know when a hidden treasure is going to show up.

Those Mets cards are fantastic.