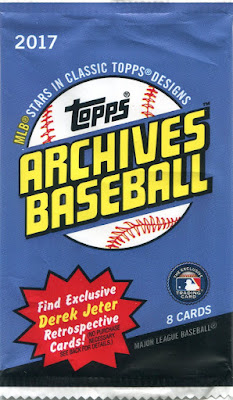 The season of Archives is upon us, my friends.

For my money, 2016 Archives was far and away the most improved product from last year, so much so that it very nearly ended Stadium Club's run at three straight Set of the Year titles (and part of me still wonders if Archives should've been #1 after all). You can see why I've been so excited for 2017 Archives to hit the shelves.

Though its only been around since 2012, Archives has seemingly had all the ups and downs of a set that's been around for decades: the first few editions were nice and fresh, then came some dark years of regurgitated, uninspired awfulness, and suddenly an unexpected resurgence that's put Archives back on the map.

A friend and I took a trip to the deep suburbs to hit some thrift stores this past weekend, and somehow I convinced him to make a detour to a nearby Wal-Mart (that's how much I wanted these: I actually went to friggin' Wal-Mart) to see if they had any 2017 Archives available. They did, lo and behold, and I grabbed a blaster and a few rack packs in celebration.

So, would Archives be able to repeat the success of 2016? 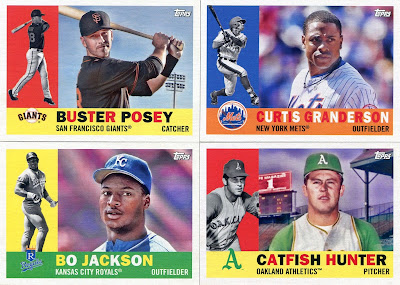 I think so: I still enjoy last year's release a bit better, but 2017 Archives still has all the fun and promise of 2016, and you better believe it's going to make another run at that elusive Set of the Year title come December.

The first of the three designs honored in this year's Archives is 1960 Topps, one of the better designs of the vintage era but one I got my fill of with 2009 Topps Heritage long ago (but that's the risk you take running two Topps-centric retro sets simultaneously).

Nevertheless, it's still more color than almost anything you see from Topps these days, and no matter how much Topps has tried to run the idea into the ground, I still takes immense pleasure in seeing stars like Bo Jackson on way-back designs. 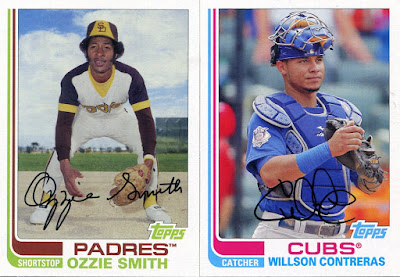 I don't have much to say about the '82s -- a design that has never been among my favorites and one that was already honored by Archives in 2013 -- so let's take a minute to talk about the most apparent change in this year's set: the card stock.

In an attempt to make Archives more authentically "retro," the 1960 and '82 cards both use thicker, rougher, Heritage-esque stock, something I noticed from the moment I held the first card in my hands.

I don't really care much one way or the other about this, but it's a change worth noting and one I suppose I should applaud Topps for in making Archives as Archive-y as possible. 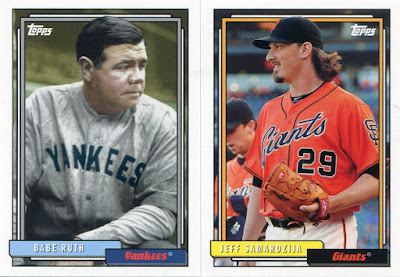 But that's all small potatoes in relation to the real draw of 2017 Archives: the rare nod to 1992 Topps.

My favorite aspect of last year's Archives was the choice to honor '91 Topps, and I thought Topps pulled it off with flying colors. Much like '91, 1992 Topps is (in my opinion) among the most underrated designs ever and one you don't much hear about these days, for whatever reason.

It also holds special importance to me since it's my birth-year set, and Topps didn't disappoint: I think the '92s are fantastic, just as well-done and true to the original as last year's '91s. 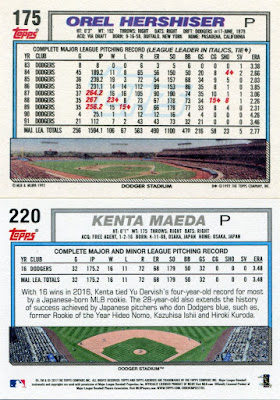 Topps has had a tendency to slouch on card backs over the years, but as you can see with this Hershiser/Maeda pairing, I'm glad to see they kept the panoramic stadium shots of the '92s intact. 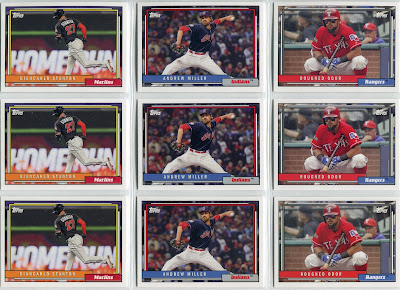 The only bad thing I can say about Archives doesn't have much to do with the cards themselves: it has to do with Topps's continued problems in the collation department.

I purchased a blaster and three rack packs of Archives on Saturday for a total of around 150 cards. There's no reason I should be getting doubles -- much less triples -- of anything considering the checklist is 300 cards long. 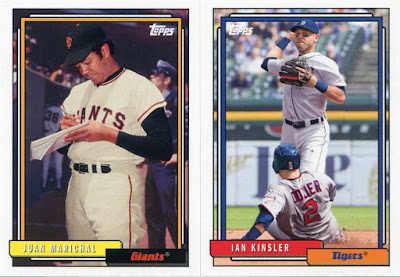 Ah shucks, I can't stay mad at you, Topps, because you know the way to my heart: mini-collection hits!

These, again, stay true to the original, since 1992 Topps features more cards for my various themes than just about any other Flagship set I can remember. 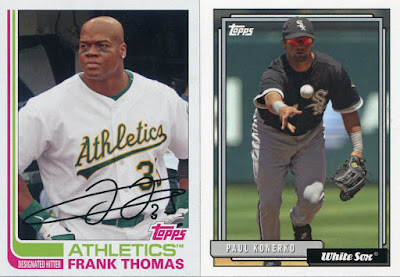 A couple South Side Legends, including Paul Konerko's first inclusion as a "legend" in a Topps set (I keep having to remind myself he's retired) and a jarring (yet welcome) glimpse of Frank Thomas as an Oakland A.

But nothing was more awesomely jarring than my favorite base card of the lot. 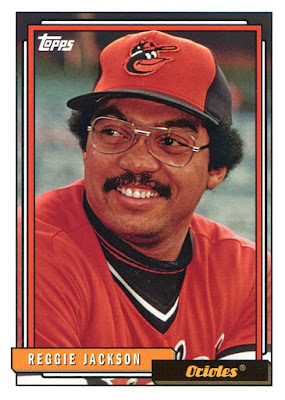 REGGIE AS AN ORIOLE!

REGGIE AS AN ORIOLE! 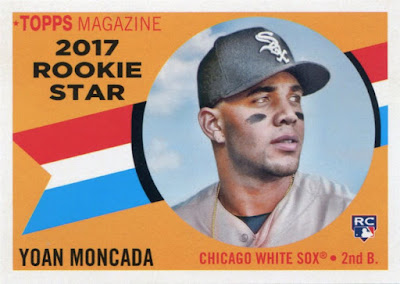 In terms of a successful combination of base and inserts, Archives is likely the most well-balanced product out there.

Each rack pack comes with one of these special 1960-themed rookie inserts, probably my favorite of the vintage rookie designs. I don't chase many prospects these days, but I was excited to pull this Yoan Moncada, the centerpiece of the Chris Sale deal and the South Siders' infielder of the future.

For now, though, it's a zero-year card, but here's hoping it doesn't stay that way. 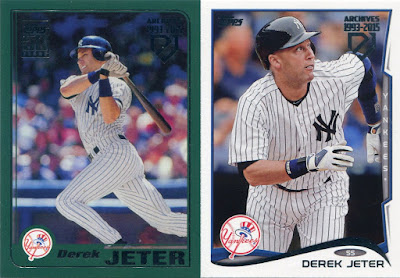 Just when I think the Derek Jeter overkill couldn't possibly get any dumber, Topps went and did something like this: an entire insert set of Topps Jeets reprints.

And totally not redeem themselves. 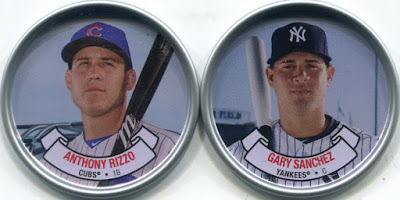 Each blaster comes with a special pack of two coins, done up in the style of the 1964 Topps Coins design.

I don't have any real desire for these since I can't display coins in a binder, but I was happy to pull the Rizz (though the Sanchez is available if anyone wants it). 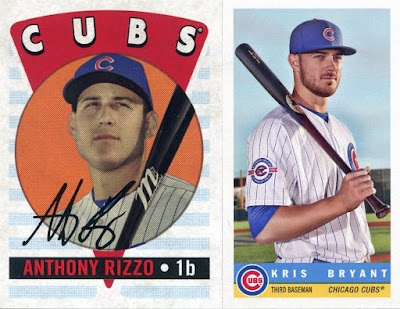 These two beauties came back-to-back in the very first rack pack I opened (a pack which my friend actually picked out for me, mind you). The Rizzo is from the oxymoronically-named "Retro Original" series a and reminds me of a drive-in movie theater, for some reason. The Bryant honors the '59 Bazooka design, and I can pretty much forget about ever owning a real one of those.

Eventually, I'd opened my three rack packs and was down to the last and final pack of the blaster, figuring I'd already partaken in all the joys Archives had to offer, until... 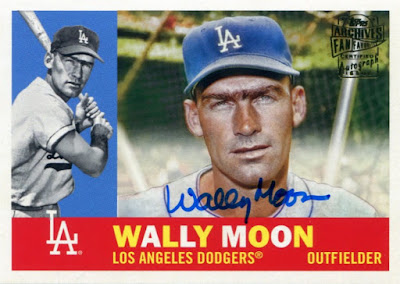 1) HOLY HELL! I've never pulled an autograph out of Archives, and to get one of a guy as (in)famous as Wally Moon was a real treat.

2) I had no idea Moon was still alive -- notice the on-card signature -- but it's true: Wally's still alive and kicking at the age of 87.

3) So much inner conflict. What should I do? It's hard to give up something as sweet as this, but after all, I'm not a real autograph chaser. And gosh, I know so many Dodger collectors, many of whom would probably treasure Wally more than I ever could.

I don't want to completely spoil the surprise, but I just mailed a package to a Dodger fan this afternoon (whom I owed a return fire) that included The Unibrowed One himself. Hopefully said blogger will give it the TLC it deserves.

So that's 2017 Archives. A fun set that doesn't leave me wanting, and one that'll be sure to receive strong consideration for Set of the Year. Even so, I really figured I'd be able to restrain myself from further indulgences, especially considering I'll probably be able to find most of these cards in dime boxes at future shows.

I tried to tell myself a blaster and three rack packs was more than enough of a sample when I walked into Target this morning for an ordinary grocery run. 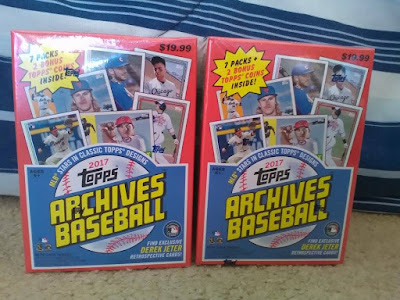 Sigh...you know what they say about best laid plans.

I guess any set as great as Archives deserves an encore performance.
Posted by Nick at 6:05 PM

As if I didn't want Archives enough already, you've got me really clamoring for it now! Luckily for me, Father's Day is only a week and a half away which means that it's cards for a Father's Day gift! The only dilemma I have is whether to go to the card shop or grab some from Target. Decisions, decisions.

PS: The Wally Moon autograph is cool but the real star is Reggie as an Oriole!

good stuff there nick. topps did a good job with dodgers in the auto set this year with moon, cey, mota, and lasorda. i've been waiting for prices to drop, but finally pulled the trigger on a mota. one down and three to go.

i'm hoping that maybe i'm the one you sent a package to, but i'll wait and see if a moon shot arrives. actually, i am waiting for a moon card in my latest comc purchase that is a pretty big deal for me.

finally, for what it's worth, moon also made an appearance at dodger stadium this year throwing out the first pitch on opening day with lasorda.

Congrats on the Moon auto, even if it was fleeting in your collection.

And wow, that Reggie is awesome. I'm bummed I didn't pull it from either of my 2 hobby boxes (I don't suppose it's one of the cards you have triples of? haha.) While the photo looked familiar, it might be new to cardboard.. so that's nice.

Awww, man.... Just when I'd convinced myself that I could live without Archives this year, it's pulling me back in. The coins are cool, even if I never know what to do with them, and that Reggie is fantastic!

These are great!...hopefully I can snag ya some damaged packs at my vendor gig today!

Congratulations on pulling the Moon. I had to pay $10 for mine at the flea market last weekend. I'm glad to hear that Topps upgraded the card stock for the 1960 and 1982 designs. That's pretty cool. And including Reggie as an Oriole is even cooler. Great review Nick!

Congrats on pulling the Moon auto. I was pretty excited to see him in the set. I'm sure you made a Dodgers fan day by sending that out.