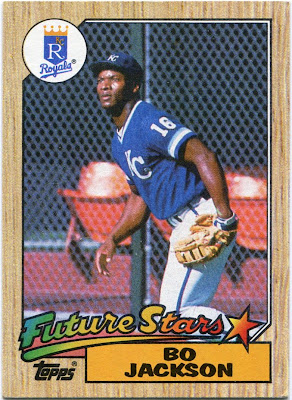 After about three months of "Junk Wax Bracketology", our champion has finally been crowned.

You, the readers, voted, and now I'm glad to present the first official "king" of the overproduction era. It was a close championship matchup, but the honor goes to...

He edged out a slim five-vote victory over Benito Santiago to take the crown. He'll forever be immortalized with his extremely special accolade under the "Gems of Junk Wax" tab on this blog.

I can't say I was expecting "Bo" to win it all. I knew he'd advance deep into this thing, but I wasn't sure if he had the following needed to take the title. (For the record, I picked the '91 Topps Carlton Fisk to win the whole kit 'n kaboodle.)

Just goes to show what I know, I guess.

As one of the definite icons of the overproduction era, though, Jackson is a more than fitting champion. 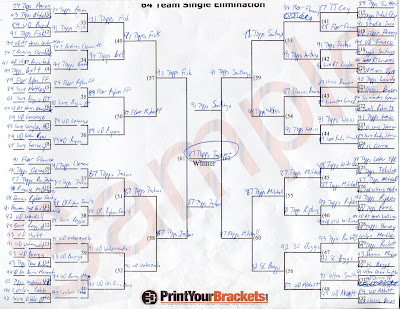 To wrap this whole thing up, I'd just like to once again give a tremendous amount of thanks to all my readers who took the time to vote in this thing.

As I've said before, this tournament was simply another pet project of mine when I started it. (As was the whole "Gems of Junk Wax" theme, for that matter.)

But, thanks to all of you, it transformed itself into a smashing success. It went way better than I'd expected. Keeping my own personal bracket (which you see above) was simply awesome.

So, although I'm happy we've finally crowned a champion, it's still a bittersweet moment.

Running this tournament over the past few months has been an absolute blast. I'm a little sad it's over.

Still, there is a light at the end of the tunnel, after all.

Once I induct 64 more cards into the "Junk Wax Hall of Fame", I'll most definitely be holding a second tournament on the blog.

Looks like I have some work to do in the coming weeks, months, and years around here. I'm excited to reboot the "Gems of Junk Wax" theme very soon.

So, once again, fellow readers, I thank you for your participation in this thing over the past few months. I hope you had fun.

Padres can win anything, it seems. Congrats to Bo, I didn't think Benito would make it this far, so I'll take my silver linings as I can get 'em. I still don't see how it gets any better than '92 Topps Ripken/Gerhig.

Lookin' forward to the next 64 someday. By the way, I voted for Santiago, myself. But I called the winner a few weeks back. Hooray for me! Now I just need to pick some lottery numbers...

Great competition!
Still wanted to be the '87 Topps Mitchell to win but that's ok. Bo is a cool card to win.

Hope you do more of this in the future!

Have you considered having everyone fill out their own bracket next time around before you kick off the next field of 64 competition? Everyone loves filling out brackets!

Each contestant could submit their favorite junk wax card along with their bracket in a PWE and then you could give away the cards to the contest winner.

Just tossing ideas around. Ana Lu is right, it was a great competition and some fantastic reading the past couple of months!