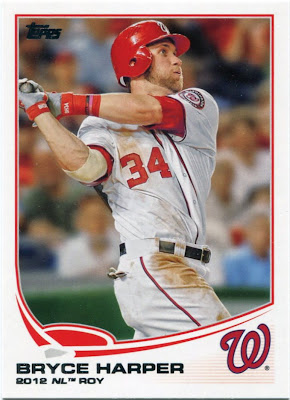 My Series 1 breaks were the only success so far, I'd say. Then again, being the first cards of the new season, it's hard not to have fun with those.

Of the three 20-card Heritage rack packs I busted a few months ago, I pulled a grand total of 60 base cards. Not one insert, parallel, SP, or anything else fell out of them.

The lone GQ pack I purchased was a miserable experience. My Archives rack pack wasn't anything special, either. I've had awful collation/quality control issues with my Series 2 breaks thus far, too. (You'll hear more about that in a future post.)

My dad, on the other hand, seems to have the magic touch in 2013. The Heritage rack pack he bought me resulted in a sweet Buster Posey SP for my binders, among many other nice cards. His pack of GQ had quite a few highlights as well.

And, after digging through the contents of a Series 2 hanger box from good ol' pop, it's obvious that he still has the hot hand.

Compiling a "Top 10" list for this particular break was especially tough. Although I'm a big fan and avid collector of his (at least with the more lower-end stuff), Bryce Harper had to settle for an honorable mention with this recap.

Here's what bested the young phenom from my dad's rack pack. 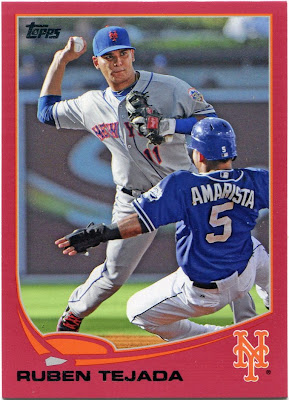 While I prefer to have the base versions for most frankenset candidates, the Target variation of this spectacular "double dip" shot is more than welcome.

My case of collector's OCD certainly isn't happy I haven't yet tracked down the base issue, though.

Having a parallel without the base card is one of the worst offenses in that realm. 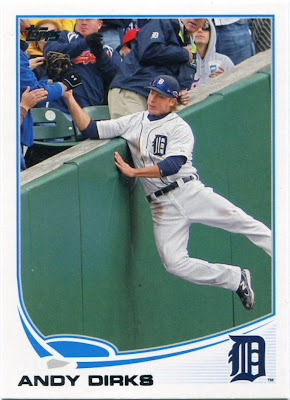 Here's an awesome addition to my "At the Wall" mini-collection, with a twist.

About 99 percent of the cards in that particular theme feature guys testing the limits of the outfield wall. Only a select few show ballplayers going over a side wall, as we have with Mr. Dirks here.

Perhaps it's time for an "At the Side Wall" branch of that particular mini-collection. 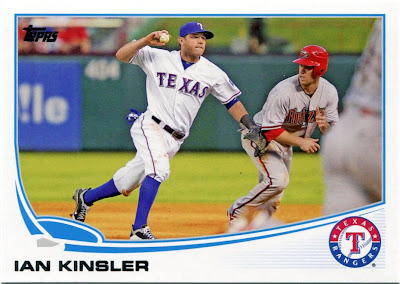 Simply a spectacular action shot here, despite the fact that Kinsler appears to be tagging out the Arizona runner without the ball in his glove.

The fact that I'd already seen this particular photo on his Opening Day card is what prevented it from moving higher on the list. 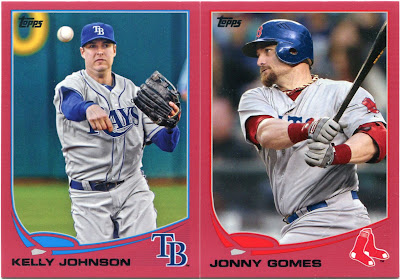 Okay, so I cheated a bit.

This list is really a "Top 11 from the Hanger Box" countdown. It just doesn't have the same ring as a "Top Ten" post.

I paired these cards together because they were exciting pulls for the same reasons. Of course, they're both red-bordered Target parallels. I think most of us can agree that Topps knocked it out of the park with these this year.

However, they're also my first cards of both Johnson and Gomes in their new 2013 duds. And, no, I haven't tracked down the base versions of these, either.

My OCD is going to have an absolute field day. 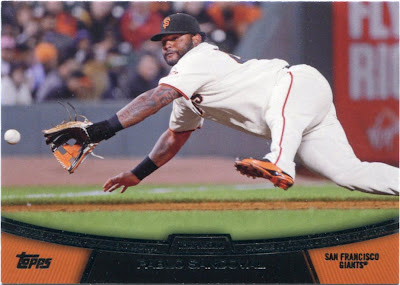 These are amongst my favorite inserts of 2013.

Topps has stretched the whole "chase" theme a bit this year, but I think they really work well with the "Chase It Down" series.

With a "Web Gem" featured on the fronts, each individual insert includes a terrific action shot.

Plus, the backs track every photo to a particular moment in time. According to Topps, Sandoval made this amazing play off a smash by former Astro Brian Bixler on June 12th of last year.

Very reminiscent of 1997 Upper Deck, which just so happens to be one of my all-time favorite sets. 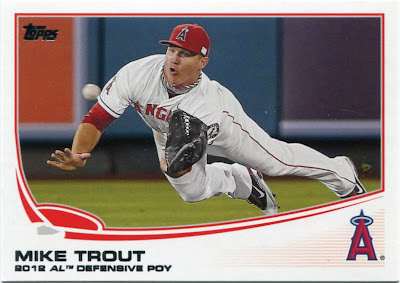 Mike Trout is one of my newest and proudest "binder guys".

However, much like Bryce Harper, his cards don't usually come cheap. Even his base issues are still quarter, 50-cent, or even dollar box material.

That's what makes pulling cards of "high-dollar" guys like Trout so great. It saves me quite a bit of money having to chase them down on the secondary market.

Despite what the book value-minded collectors may think, I could care less about the value of Trout's cards.

I just love this one because of the awesome action shot. 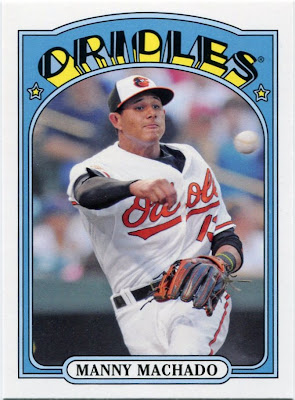 Before this hanger box, I was on the fence about adding Manny Machado to my collection of "binder guys".

Like Trout and Harper, I couldn't help but be a bit scared that cards of the rising star would be out of my price range.

Cut back to the hanger box, where I'd go on to pull both "Chasing History" and (far superior) "1972 Mini" inserts of Mr. Machado.

I took that as a sign. Potential budget crises be damned. 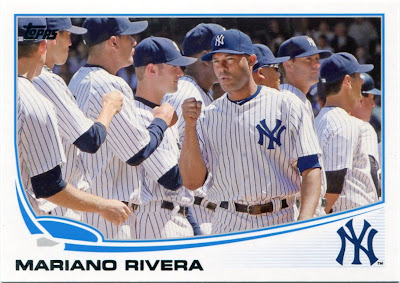 Once again, this card is slightly hurt by the fact that Topps already used this photo in their Opening Day checklist.

Still, that's taking nothing away from it. Depending on whether or not he receives a card in next year's Flagship set, this could very well go down as Rivera's "sunset" issue.

I think it'd be a darn good one. It's an absolute cardboard masterpiece, and one that shows the team-centric attitude Rivera has carried throughout his Cooperstown-bound career.

Plus, at card #600 in the checklist, "Mo" received the hero treatment by the folks at Topps. 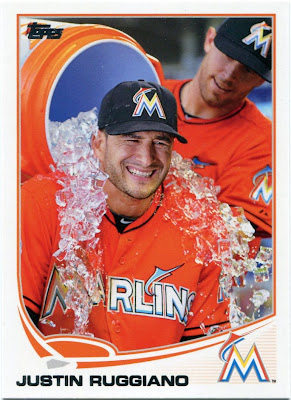 Let's get one thing clear.

I love these types of wacky celebration shots. Ruggiano isn't even in my binders, yet this awesome frankenset staple still managed to work its way up to #2 on this list.

The fact that Topps relegated them into impossible-to-find SPs over the last few years is what made them such a source of aggravation for me. Knowing that all those awesome shots were hopelessly out of my price range wasn't too pleasing.

But, thankfully, Topps has slightly come to their senses. Great shots like this Ruggiano are now making their way into easy-to-afford base checklists. 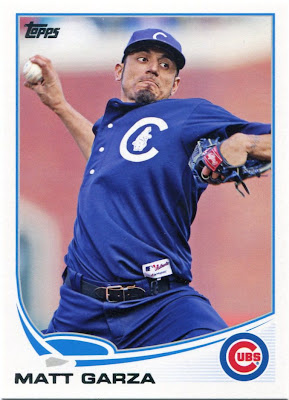 It's sheer coincidence that I'm posting this one on the exact day my beloved Cubbies shipped Garza to the Rangers.

I personally think the Cubs got a nice haul for the soon-to-be free agent, but that's not what we're discussing here.

What we're talking about is why this card proved to be the best of the Series 2 hanger box.

Considering they've been around for nearly 150 years, the Cubs don't wear too many throwbacks. Much of that is because their uniforms have been fairly static for the last century or so.

So, due to their sheer scarcity, I'm absolutely ecstatic to see them pop up on cardboard every now and then. Throwbacks of my favorite team are a match made in heaven when it comes to my collecting interests.

In a "turn back the clock" promotion, the Cubs wore these 1912 duds on June 2nd of last year in a contest against the eventual World Champion Giants. (Not surprisingly, the Cubs lost, 2-1.)

Continuing my dad's magic touch with wax this year, Mr. Garza was far and away my favorite pull of this hanger box.

I think you might be seeing it again once my "Best Of 2013" list comes around in December.
Posted by Nick at 6:21 PM

That Mariano is a GREAT card. I'm not a fan of ANYONE on the Yankees, but even I can appreciate that one. I'd be willing to bet that it'll make an appearance on my end of the year lists.

Oh, and the Cubs made out pretty well, Mike Olt is a stud. I think the Rangers are dumb for dealing him, but then again Adrian Beltre doesn't seem to be going anywhere soon, so he's kinda blocked at third. With Olt and Rizzo on the corners, and Barney and Castro up the middle, that is looking to be a pretty good infield.

That Ruggiano is an all-timer. Perfect timing.

I like the Career Chase back on the Rivera. Instead of the ## of X away from the record, it states that "With 608 saves, Mariano Rivera is the all time record holder."

Some very nice cards there, Nick.

I truly hope that Topps will produce a 'true' sunset card for Mo next year - he's having one of his best ever seasons this year, and it would be great to see his entire career on one card.

Panda in action!...cool card!...I hope our mojo continues at the National!

Love the Gomes. He is becoming a personal favorite this year.