Please Mr. Postman (A trade post) -- Two of a kind 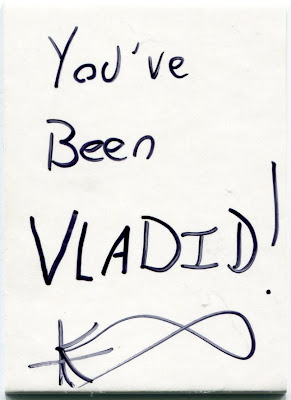 Two more trades in the books.

The first comes from Kirk over at "CaptKirk42's Trading Card Blog".

I was the victim of a "Vlad-ing", as Kirk sent me a healthy stack of Vladimir Guerrero cards with the above note attached.

I own more cards of Vlad than any other player I collect, with over 500 cards of his. Kirk's package just added to the "Vlad Madness". 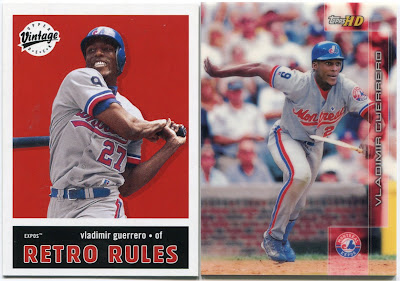 Most of the Vlads were from the late '90s and early 2000's, the era in which I first started to collect.

I'm not exactly sure how Upper Deck got away with their Vintage sets. I like them, but that's only because they're direct ripoffs of 1970's Topps sets. (Look at this. And this. And this.)

The Vlad is an insert from one of the UD Vintage sets. I'm not sure why, but I like the all-red backdrop. It suits Vlad well. 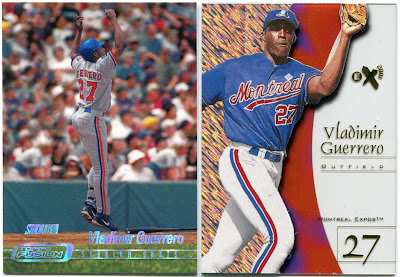 The Stadium Club card was easily my favorite from the package. 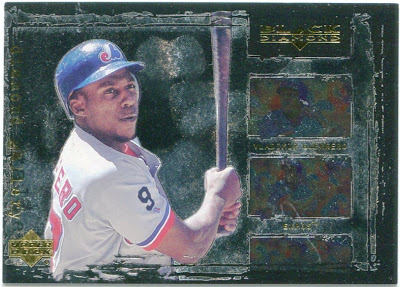 This is one of the most interesting cards I've ever seen.

It didn't come up too well on the scan, but there's a few "freeze-frame" shots of Vlad on the right side of the card.

I can't decide whether I love it or hate it. 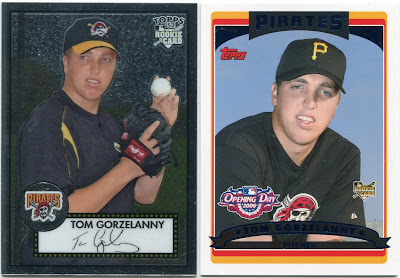 The second package comes from one of the best in the blogosphere, William over at "Foul Bunt".

William's been nothing but gracious to me. He sent me a few cards of local hero Tom Gorzelanny a few weeks ago that I somehow never previously posted. 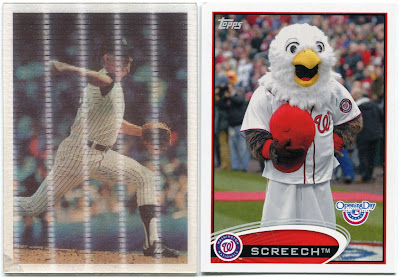 The cards I received from William yesterday can only be characterized by one word.

If you know anything about my collecting ways, it's that I love looking through random cards. William certainly succeeded in that department, sending along a Sportflics Phil Niekro and a kind-of-creepy card of the Nationals' mascot, "Screech".

But one of the cards William sent was actually a card I've wanted for a while. 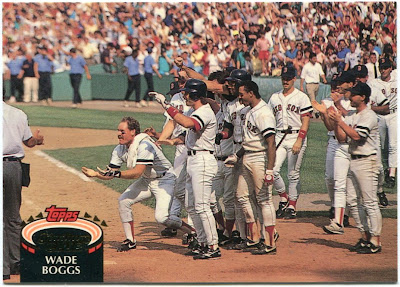 I can't even begin to put into words how great this card is. All I can say is definitely expect to see it again in a future "Cardboard Masterpieces" post. (Or even a "Gems of Junk Wax" post.)

Much thanks go out to fellow bloggers Kirk for the "Vlad-ing" and to William for the great randomness, especially the Boggs!
Posted by Nick at 1:56 PM

Interesting how the Wade Boggs card is not Wade with the hit but being the first in line to congratulate someone returning to home plate. Interesting...

Yeah that Black Diamond Vlad is an oddball. Chrome filled cards like that one don't scan well, just as those sportflics and for some reason the 1989 Fleer cards (The striping looks all funky and multi-colored when those get scanned.)

Wow that is a cool Wade Boggs. It almost looks like they are waiting for word from a review to see if the Homer counted. Odd choice of cropping the picture, or framing of it depending on how much of the scene the camera capturred. I have a love/hate attitude with the Stadium Club cards. They have great photography, but sometimes the type of action choice is weird. A few years ago I would avoid them like the plague but now like many other "junk wax" years cards I'm getting back into them a little while re-discovering them while I reorganize my collection (and begin to organize the more recent acquistions of the last several years. A move 4 years ago August didn't help)

If you think that package was random, wait til you see the next one I've started for you... I pretty much go through my boxes and sort cards, when I see one that I think you'll like, I put it aside. I'd like to think I have a pretty good gauge on what you will find interesting. I also try to include some of the off the wall sets, etc that I have. So much stuff in these boxes, so few bubble mailers...

Jeff makes a great point, and while I am a Wade Boggs collector, I too found it a little odd that the card of Boggs is not celebrating Boggs. Still, the card stands out - and it is G-R-E-A-T!!!!