Ways to my heart 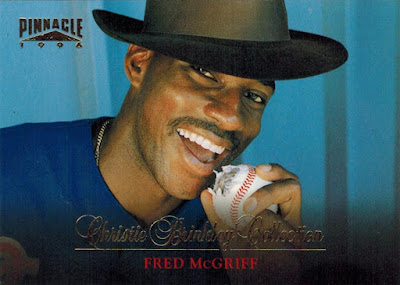 As scattered and random as my collection is, I never worry that I'm collecting too many things -- I don't think that's possible.

I do, however, sometimes worry that people might be wary of trading with me because they simply don't know what to send. Someone who (seemingly) collects everything can, I guess, be as frustrating someone whose want list is three cards from 1946. But I like to think I've been blogging and trading for long enough to make the point clear: you can send me anything and chances are I'll find something I need out of the lot. Better yet, people I've traded with for a long period of time seem to have noticed trends in finding ways to my heart.

This, I think, was perfectly symbolized by a gigantic bubble mailer I recently received from Shane of "Shoebox Legends" fame, a longtime friend of the blog and a just generally excellent blogger and trader. 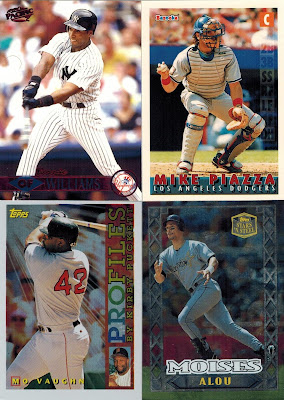 If the McGriff is any indication, one way to my heart is '90s stuff: particularly weird '90s stuff. 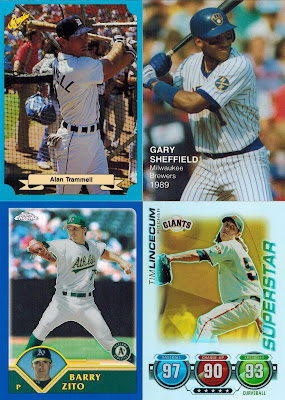 Oddballs and refractors are sure to make me swoon. 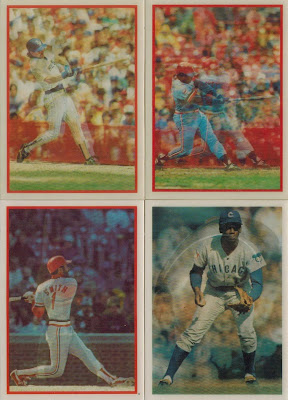 It's hard to communicate my love for 3-D cards since they're death on scanners, but believe me when I tell you that I still get an odd amount of joy flipping the images back and forth in my hands. 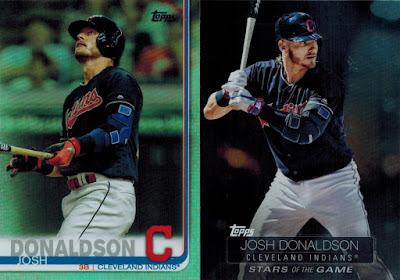 I'm not sure if Shane purposely did this or not, but he sent along two sightings of what is one of my favorite (and most sure to be forgotten) Short Term Stops in recent years: Josh Donaldson's 16-game stint with the Indians at the tail end of the 2018 season.

Seen on the left is a foil parallel of what I thought was Donaldson's only Indians card, and on the right is an insert I just plain didn't know existed. 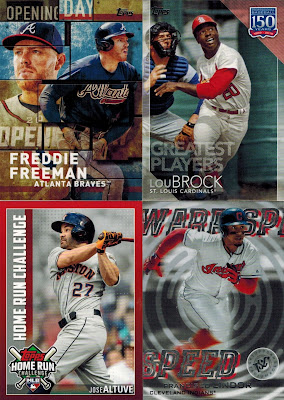 There was a time in my life where I had zero concrete want lists -- I took whatever I could get from new sets and/or had a (often imperfect) list of stuff I needed in my head.

Though I still thrive on randomness, I do have a large amount of specific wants displayed on various alleys of this blog -- and maybe it's me mellowing out a bit with age, but I now find it incredibly calming to find, click, and delete cards from my want lists when people like Shane knock them out. 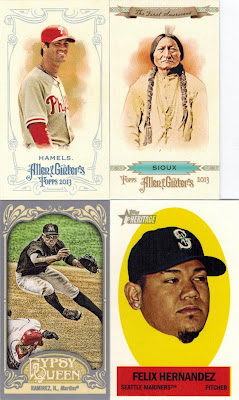 My heart is no match for minis. 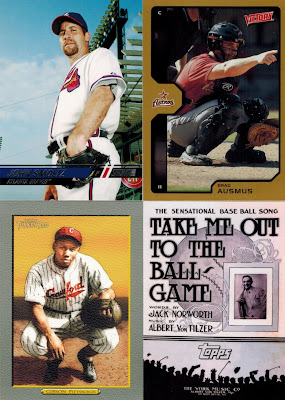 My favorite trading partners are ones like Shane who know how to sprinkle frantic randomness within stacks of other specific stuff I like -- that, perhaps more than anything, is the way to my heart. 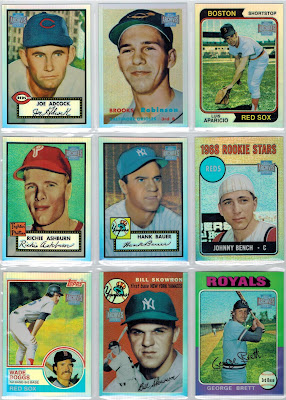 But the real coup de gras was what I found stuffed within a good three or four of the team bags in Shane's mailer, because they held... 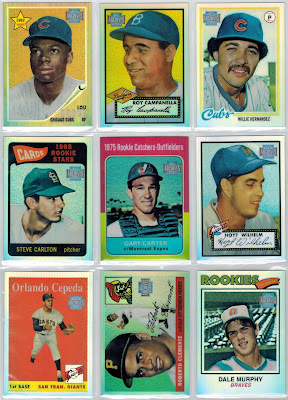 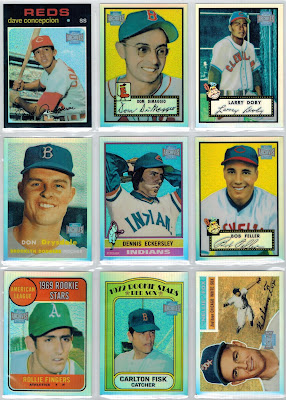 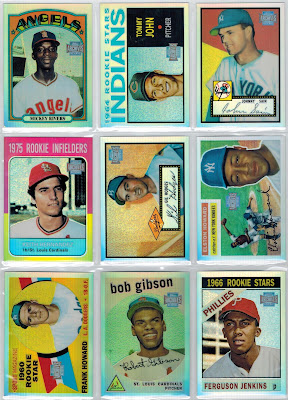 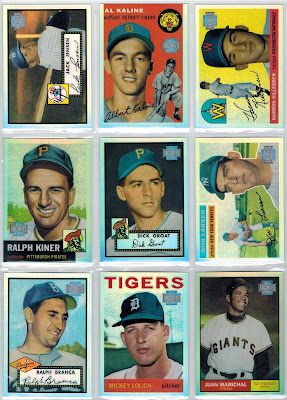 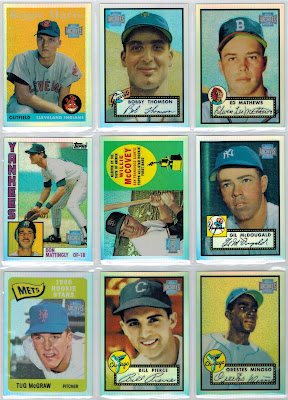 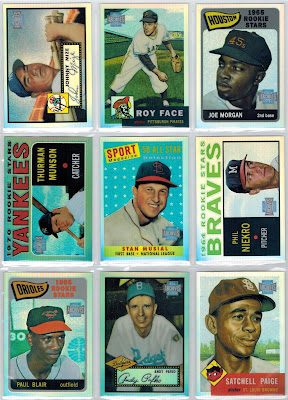 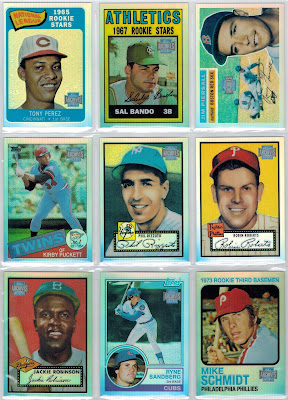 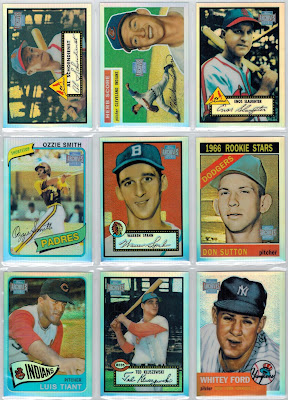 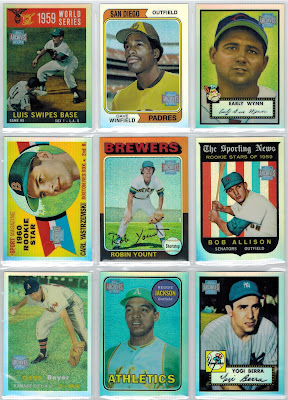 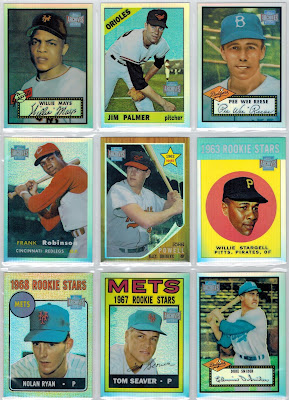 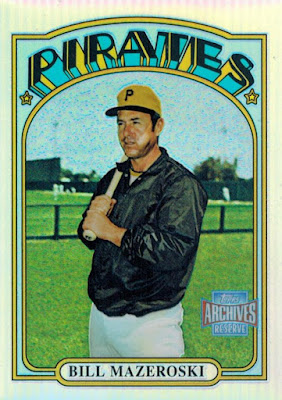 Seriously, I loved this so much that I scanned all 100 cards. The standard 2001 Archives is one of the sets of my youth -- I credit it with spawning much of my current love for sunset cards and vintage in general -- and to have the Reserve set dropped into my lap in one swoop is especially nifty since I still need a lot of 'em and they aren't common dime box fodder.

Glad you enjoyed the package Nick! I have to give a shout out to John of Johnny's Trading Spot, as he sent me that Archives set as part of a prize package a while back. Since I'm downsizing the collection I took a shot that it might be better in your hands, and it sure looks like that was a good instinct!

2001 Archives is a beautiful set. Every time I come across a single, I think it's some rare insert or something.

Archives Reserve is just an incredible set. It's one of those that got me back into collecting.