The one where I find a new job 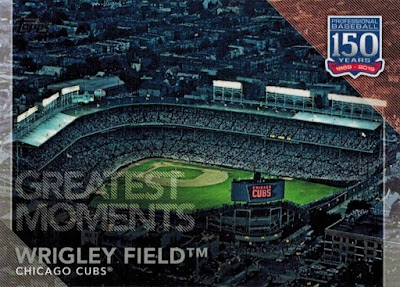 As of next week, I'll be working full-time at a local Half Price Books shop. Being a book lover myself, I like the trend of bookstore jobs I've fallen into here in my adult years, and I'm excited to finally break out of the corporate book world (I've been working at Barnes & Noble over the past year-plus) and into the more independent part of the scene. Unlike my past couple places of employment, I'll get full benefits, a hefty discount, and first access to any of the books that come in. I don't know if I'd call it my dream job, but it's the closest I've come in the working world thus far.

And as you might have already guessed by the way I collect cards, used bookstores like HPB are much more my speed. 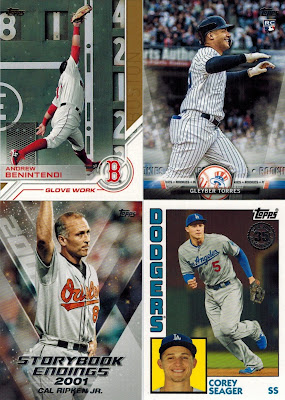 I suppose my new job won't affect my card collecting much except for the fact that I'll (hopefully) have a bit more pocket change at my disposal.

But either way I don't see myself buying much more retail than I already do, given that I have people like Greg of "The Collective Mind" who are nice enough to send me PWEs full of inserts from my want lists (including the excellent Wrigley Field panorama at the top of this post). 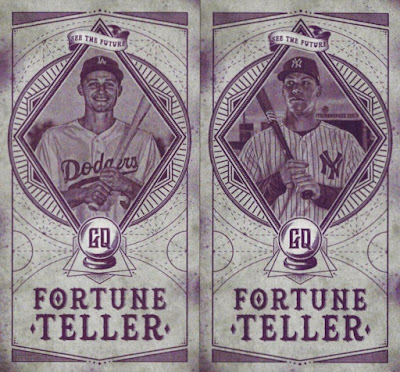 Same goes for the stack of want list assistance I received from Chris of "Nachos Grande" a while back.

I never really realized it before, but Ithink part of the reason I like GQ's inserts so much is that many of them rely on mystical themes (Fortune Teller, Tarot of the Diamond, etc.). 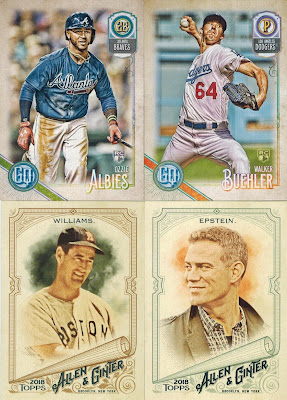 Getting the latest and greatest stuff is always fun, but I also like when people like Chris go back a year or two on my want lists because wow do these dry up fast at card shows. 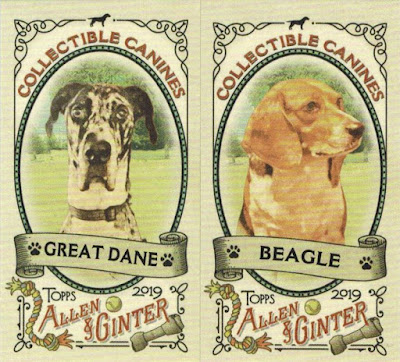 In keeping with the want list damage besieged on my mailbox over the past few months, my buddy Alex of "Chavez Ravining" fame reached out to let me know he had some 2019 A&G for me.

Because in addition to these two adorable pups... 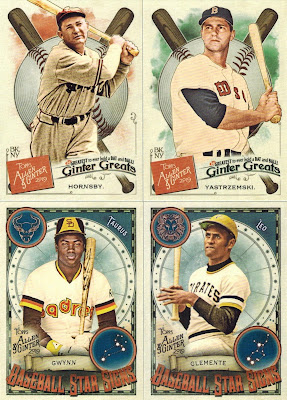 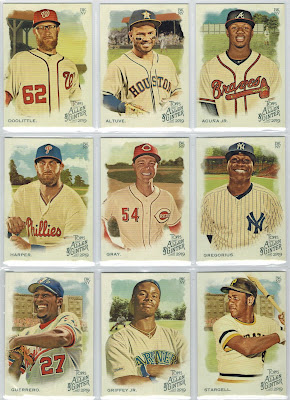 ...Alex obliterated a good number of my A&G base wants just weeks after the set even hit the shelves.

Vlad and Didi and Pops are all great, but that Griffey is far and away the best of the lot here -- I'd say it's even in the running for an appearance on my Card of the Year lists. 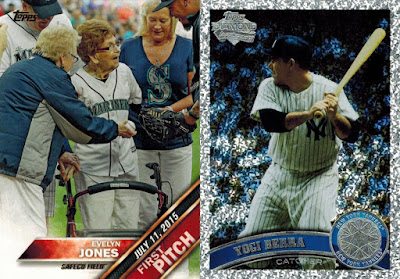 I also received an I'm sending you some cards email from Jeremy of the terrific "Topps Cards That Never Were" blog recently, and believe me when I say that such emails are among the purest joys known to humankind.

Usually, all I expect are a few random goodies, like a sparkly Yogi and an appearance from Evelyn Jones, who has to be the oldest person to ever appear on a baseball card (108 years young!). 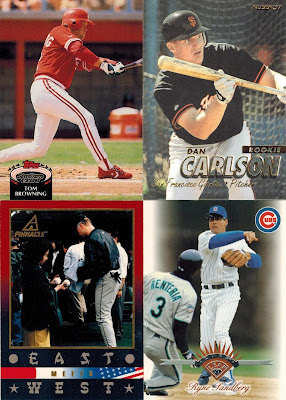 Maybe some treasured mini-collection hits, too. 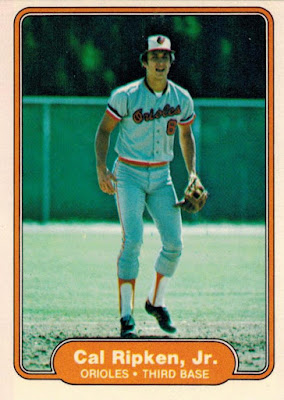 But never, ever, ever do I expect one of those I'm sending you some cards emails to turn into a Cal Ripken Jr. rookie card!

My Cal collection has progressed nicely over the past few years, but I hadn't even sniffed any of his rookie cards. I don't have near the budget to afford his famous '82 Topps Traded rookie (even with a new job), so I figured it'd be Fleer or bust -- thus its recent appearance on my "Keep Dreaming" list. Even then I thought it'd be a good while before I had even a chance to snag a copy.

But Ripken, much like my desire to work in the world of used bookstores, is a dream no more -- wish me luck.
Posted by Nick at 6:47 PM

The new job sounds like something right up your alley. Good luck!

Congrats on the new gig and even more congrats on moving into a better one.

Books and benefits... sounds perfect for you! Congratulations :)

Congratulations on the new job! Hope you have tons of fun.

Congrats on the new job! I wouldn't mind being surrounded by books all day!

Congrats...hope the new job is everything you're hoping for, or even better!

Congrats on the job Nick! Best of luck, they're fortunate to have you. Also, killer Ripken and I love that shiny Berra too!

Make friends with whoever's in charge of the records,Nick!..haha!

Congrats on the new job!

Congrats on the new job!

Congratulations on the new job!

That's excellent news. Congratulations! First access to any of the books that come in is a very nice perk.

Congrats on the new job from a Southsider!

Congrats on the job. Yaz! Tons of great cards. And that Ripken is a sweet surprise.