Open season at the flea market 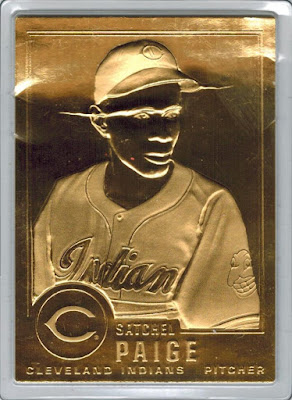 While there's a very Midwestern part of me that enjoys cold and cloudy weather, I can think of at least one reason to get excited about the rising temperatures of spring: the flea market!

Like clockwork, the first few weeks of flea market season seem to get rained- or frozen-out every year (2019 included). But temps were in the 70s this past Easter Sunday, which made it an easy choice to declare it Opening Day at the Flea Market for me. I like to tell myself I'm there for more than just the baseball cards -- maybe I'll find cheap books or a cool poster or whatever other people buy at flea markets -- but let's face it: I'm pretty much just there for the baseball cards.

Though Opening Day didn't turn out to be a super extravagant afternoon at the flea market, I certainly didn't get shut out on the card front. 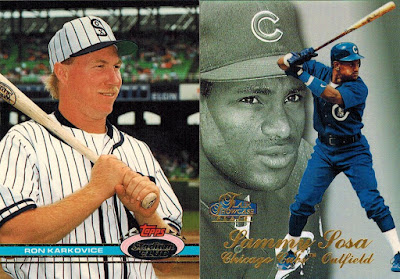 Past readers might know that I have regular vendors at this place, but the thrill of stumbling upon a new guy with some new untapped well of cards keeps me coming back year after year.

Sadly, I only came across one new baseball card vendor on Sunday. His cheap singles were priced at a quarter each even though a lot of it would've been lucky to be considered dime box material. But being as desperate as I was for cardboard at that point -- as well as just happy to be back at the flea market -- I took a look. I found a few things early on (including these two nifty throwbacks) and the vendor told me that his cards would go down to 10 cents a pop if I could find 100 I needed. 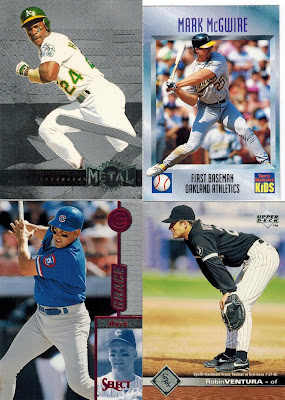 I probably only found around 50 quarter cards I wanted during my first run-through, which meant that the next 50 I snagged would basically be free with the 100/$10 deal.

After that, I picked out anything and everything that I even partially needed and/or caught my eye -- which helped since I discovered a few things I'd missed my first time around, like an SI for Kids and a rare White Sox-era shot of Robin Ventura at first base(?). 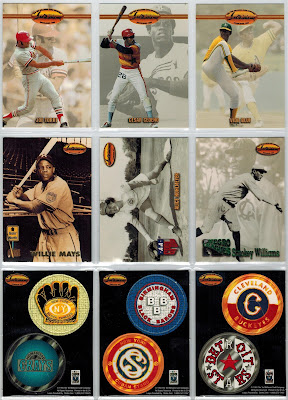 These made it easy to get to the 100-card plateau -- the guy had a near-complete set of 1993 Ted Williams in his box, and I pretty much just grabbed 'em all.

Some, yes, turned out to be doubles, but others wound up being bigtime needs, especially those fantastic Negro League pogs which I'd never seen before Sunday. 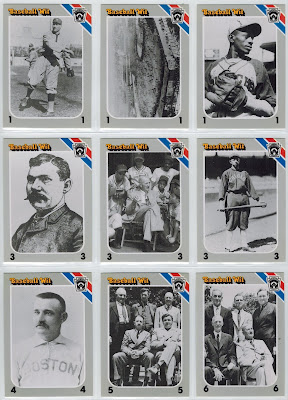 The guy also had a bit of higher-priced miscellany at his table, and while I didn't see anything that necessarily jumped out at me, I grabbed this partial set of Baseball Wit oddballs for $3.

Turned out to be a great buy, because little did I know that the half-set I bought was packed with turn-of-the-century guys you don't often see cards of. We're talking the Chris Von der Ahes and Old Hoss Radbourns of baseball lore (both of whom, incidentally, are the subjects of two books I highly recommend, written by the same author).

A little research showed that these Baseball Wits were sold together in two shrinkwrapped packs -- if these are any indication, it looks like I'll have to pick up the other half ASAP. 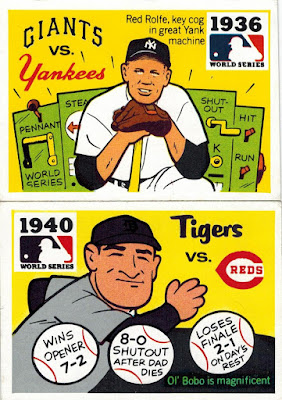 The Penny Box Guy was back, sans the penny cards -- not a huge deal though since I've pretty much bathed myself in the entire inventory of those by now.

He did, however, have a small stack of these Fleer World Series singles I love for a buck a piece, and I wound up spending the last two dollars I had in my wallet on this nifty pair. 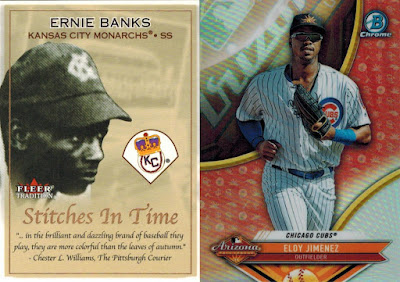 The third of the three vendors I bought from on Sunday was my main regular guy from the past few flea market seasons.

He's become a favorite stop of mine because he always seems to have new cards on display, though he does seem to have a mysterious shopper who buys up the majority of his inventory before I arrive. His boxes were almost completely pilfered by the time I got to them in the early afternoon. That's not to say this mystery collector didn't leave behind a few hearty scraps, though.

The rare Negro League Ernie Banks was all of a buck, and my "high-dollar" purchase of the day was my first card of mega-prospect Eloy Jimenez as a Cub (zero-year!) for two dollars. 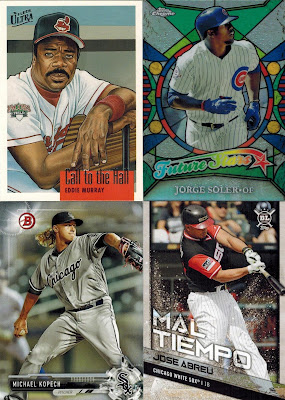 The prices of this guy's cheap boxes vary from week to week, but they were 4/$1 this past Sunday.

Nice mix of past and present here, and can't say I knew those cool Call to the Hall inserts existed up until now. 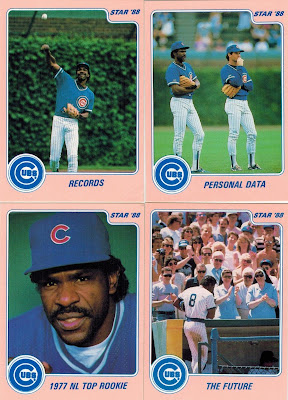 I don't know about you, but I'm always a sucker for these '80s Star oddballs. 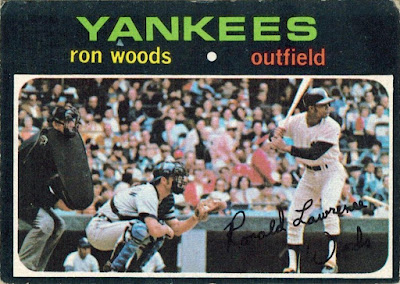 Oh, and one other thing: those 4/$1 boxes also featured vintage!

I think both myself and this vendor's other customers have picked out most of the bigger names in these discount vintage boxes by now, but somehow he keeps coming back with other nice cards and/or higher numbers I need for my frankenset.

This excellent '71 Ron Woods (featuring the elusive batter-catcher-umpire triumvirate!) was yet another card I'd somehow never seen before Sunday, and you better believe it made my frankenset without much of a battle. 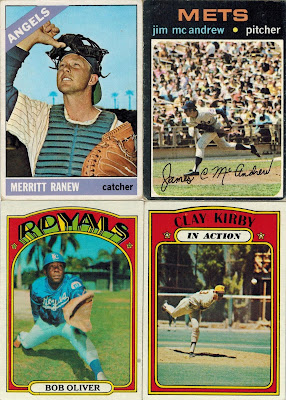 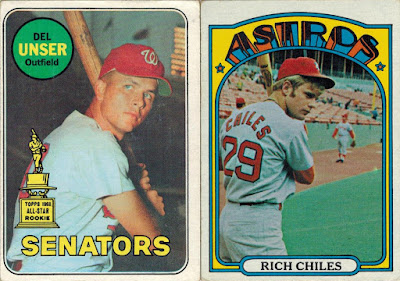 These two, on the other hand, were cards I'd known about but never tracked down...until Sunday that is.

The Unser might be the earliest night card I've ever seen, and while I can't say I know much about Rich Chiles, that '72 is quietly beautiful in the way that so many vintage cards are. 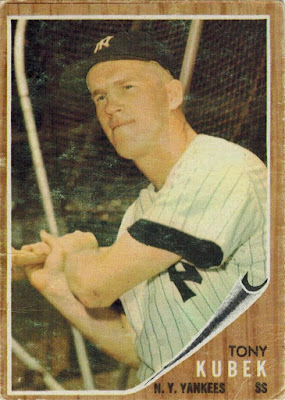 There weren't really any OH MY GOD vintage finds this time around, but for now I was happy to close out Opening Day at the Flea Market with this '62 Tony Kubek from the dollar box, which I needed for my small collection of his.

I may be a quiet soul who enjoys clouds and rain, but I'm also an avid flea market devotee who can't wait to see what the rest of this year's season has to offer under the summer sunshine.
Posted by Nick at 6:19 PM

Bob Oliver's card is so sweet. Palm trees and all!

One day we should go super early and get first crack at that vendor!

Cool stuff anyway..and I havent heard of Clay Kirby in a long while!

I triple that on the Bob Oliver card.

I've got most of a Baseball Wit set (with my PC guys pulled out), so I can probably help you complete yours. Email QAPLAGCA at yahoo.

Congratulations on the 10¢ Fleer Metal Platinum Rickey! That card is awesome! The Negro League pogs and quarter vintage are sweet pickups as well.

I missed my opening day of the flea market season yesterday due to a back injury. I was so excited to get out there. It was something I had circled on my calendar for weeks. Then I threw it out less than 24 hours before.

Negro League pogs? How is that I've never seen those before? And I've said it a few times on the blog over the years, but that Ron Woods is probably my favorite image from the '71 set.

One of the first sets I ever completed was 93 Williams. It was my first introduction to the Negro Leagues. I completed the base and all insert series but for one little pog. Pog was found just a few months ago in a DIME box! There's an outdoor flea market five miles from me but rarely has even one lonely card vendor. Seems the morning dew, dirt and wind wouldn't be the most friendly environment in which to sell cards.

I bet you'd like this video about Old Hoss Radbourn. Or really any on this guy's channel, including the Ichiro one.