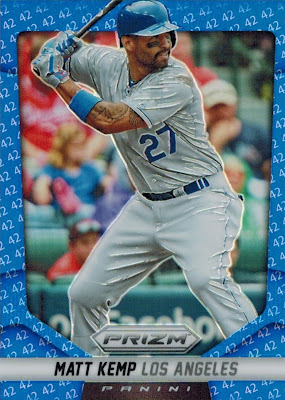 I currently have north of 80 binders scattered around my room, which makes it hard to believe there was ever a time it all started from zero.

At some point, I had to sit down and decide that collecting baseball cards was something I wanted to do. The hobby was never thrust on me: sadly, I never did get to inherit the collection of my dad's '70s youth. His cards, as the common tale goes, were all either given away or thrown out. Thus, a generation later, I was left to launch my own collection from scratch.

While I've since acquired most of what my dad once had, I've always wished I could've inherited his old cards -- at the very least, it would've been nice having the five or six '75 Bretts my dad said he owned as a kid. 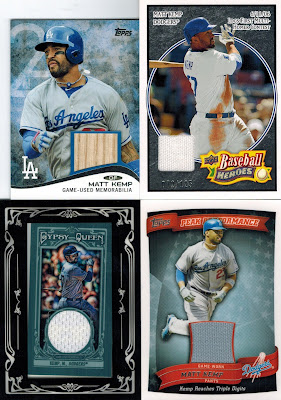 But just because my dad's cards ended up in sad landfills doesn't mean I don't get to inherit cards.

Just recently I received a package from my buddy Alex of the newly revived "Chavez Ravining" blog. Alex is just getting back into both blogging and collecting after a brief hiatus, but from what he tells me, he's trimming things down a bit. For one, he's decided to nix his Matt Kemp collection -- a hefty portion of which he generously passed down to me. While I enjoy the "42" prism parallel (made even better by the fact that it features a Dodger) and these memorabilia pieces, I doubt I would've chased these cards for my own Kemp collection.

But there's something about inheriting them from Alex -- someone who once bought, loved, and cherished these very cards -- that in turn adds an inherent beauty as they now sit in my binders. 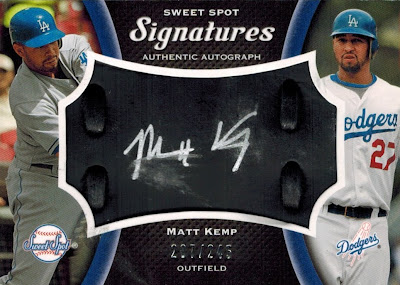 I mean, it's not every day someone sends you a Sweet Spot autograph, right?

I have a couple of these from my auto-collecting days, but I probably haven't added a new Sweet Spot  to my binders in about a decade, if I had to guess -- and just like that, my Matt Kemp collection got that much spiffier. 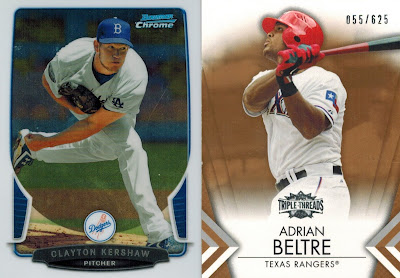 I suppose every trade is an inheritance in a way: my collection is absorbing cards once owned by others.

Hard to go wrong sending me numbered Beltres and mini-collection Kershaws (note the Brooklyn "B" cap). 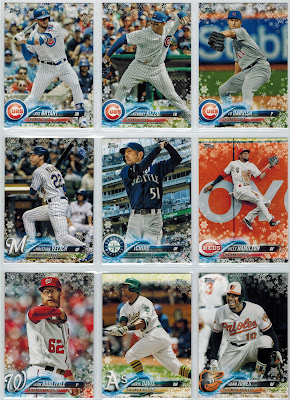 I'm proud of myself: 2018 was the first time I didn't buy any Topps Holiday stuff.

It's just as well, since Alex sent me about a blaster's worth of 'em anyways -- and pretty much all of dudes I collect! 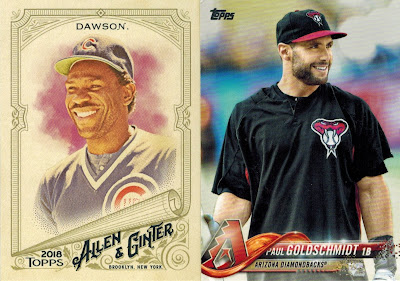 I knew I needed the Dawson here: it came straight from my 2018 A&G wantlist.

The photo-SP Goldy, on the other hand, is the far more exciting example of a card that lived deep in the wilderness, so deep that I didn't even know I needed it in the first place. 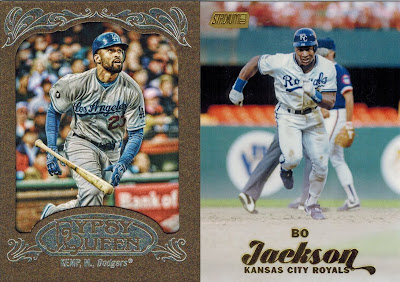 Alex dropped a second package on me not long after that first one -- this one, again, contained a portion of my Matt Kemp inheritance with that GQ parallel (which looks about a thousand times better than the base card). 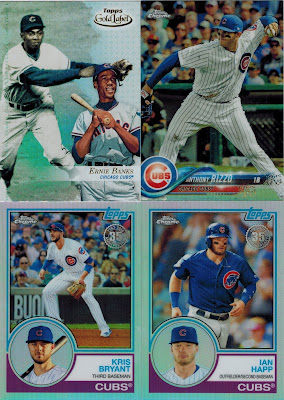 I come from a family of White Sox fans, and yet my allegiances lie with the North Siders.

I'm not quite sure how that happened, but I know I'm happy to inherit pretty much any unwanted Cubs from Sox fans or otherwise. 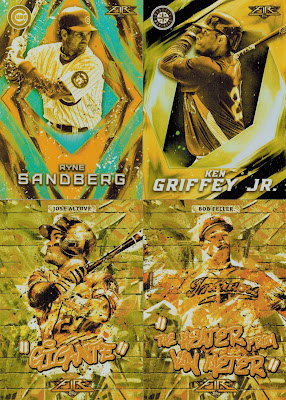 I still like Topps Fire despite its repeated attempts to burn my corneas. 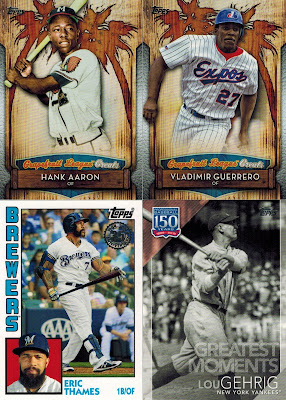 I'm wondering how sales were for 2019 Topps, because my remaining Flagship needs don't seem to be flooding in nearly as quickly as they did via trades, card shows, etc. in years past. 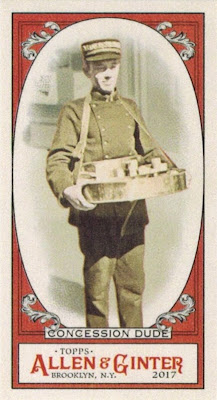 In closing, I'd just like to say: CONCESSION DUDE!

I'm working on the World's Dudes set, albeit at a snail's pace -- I'd be surprised if I'm more than a quarter of the way through the thing by now. Sure, I might be my dad's age when I finally accumulate all 50 Dudes, but mark my words: I will complete it!

Maybe by then I'll have someone to pass it all down to.
Posted by Nick at 6:17 PM

I'm staring at the Bo Jackson card where the umpire and Cub are visible over his shoulder and it's hurting my brain a little.

The Goldschmidt card is wonderful!

I often wonder what will become of my cards. I'm hoping to live long enough to see the special ten-year old boy in my life grow into a serious collector. He loves trading cards with me now, and shopping for packs. He first needs to get through college and the girlfriend who makes him forget about collecting...or if he's lucky, collects too.

The Bo was my favorite, even with all the Cubs shown, but then the Dude made an appearance. Concession Dude for the win!