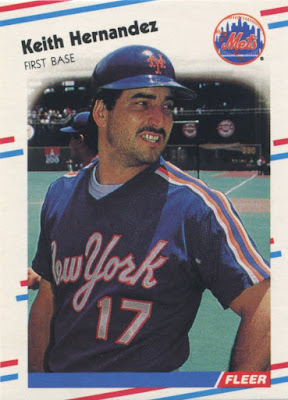 Logically, I should've been collecting Keith Hernandez a long time ago, and here's just a few reasons why.

1) On the ballfield, the guy was a former MVP and a borderline HOFer. And not to mention an integral part of the '80s Mets, one of the last teams with true character and one I'm sure I would've followed vigorously had I been alive at the time.

2) That said, I, like many baseball fans my age, probably first came to know Keith Hernandez through Seinfeld, one of the best episodes (and a two-parter!) of my all-time favorite TV show.

But even with all this, it took until this year for me to really start focusing on Hernandez's cards, and here's the Top Five of what I've accumulated for this long overdue player collection thus far. 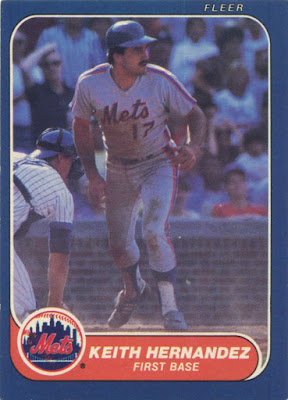 I own hundreds of Plays at the Plate (it's a mini-collection of mine), but the vast majority of those capture the scene just before or as the actual action is happening.

What we have here, however, is a rare Post-Play at the Plate: one of those select few images that capture the moment of collective exhale split-seconds after the mysterious play in question has occurred.

It makes for one of the better cards from the kinda boring '86 Fleer checklist. 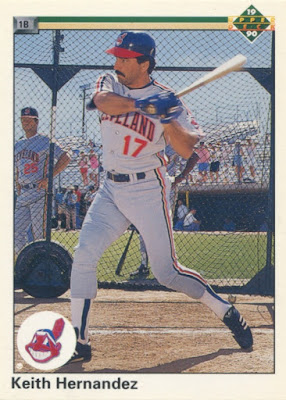 A post about Keith Hernandez on this blog would be remiss without mentioning his wildly unfamiliar stint with the Indians at the tail end of his career.

It's sad when former greats limp into the sunset in a uniform no one will remember them wearing -- as Hernandez did with his .200 average in 43 games with Cleveland -- but they sure make for great baseball cards. 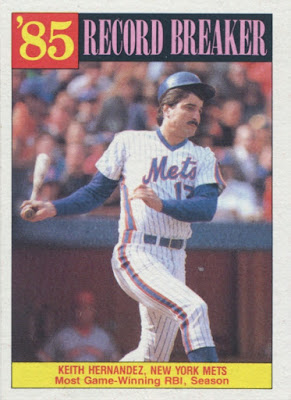 It's not every day you see a guy literally swinging out of his helmet (and just look at that perfectly quaffed hair hiding underneath!). 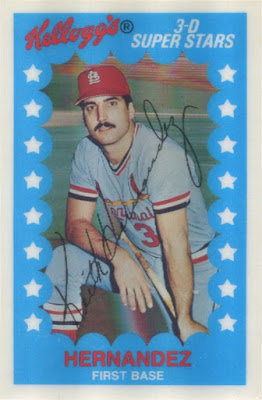 If I own a Kellogg's card of a guy I feature in this theme, chances are it's one of the five best cards I have of him. 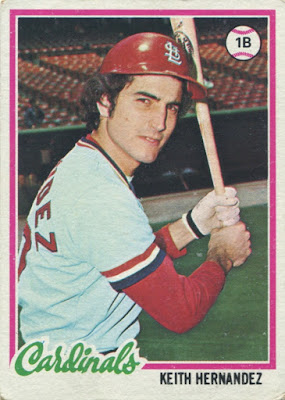 While my decision to consciously collect Keith Hernandez may have been recent, I've actually had this card for the better part of my life, and there's a story behind it.

Wisconsin Dells is a popular vacation spot for Midwesterners like my family, and we took a trip up there with my cousins one year when I was in grade school. The Dells are known for their many waterparks, but having never been much of a swimmer myself, I let the rest of my family enjoy the water one day while I went to a card shop with my dad.

While I can't recall the name of the place or even much of what it looked like, I remember finding a ton of good stuff there, including this '78 Hernandez which I probably bought because he was, at the time, a Cool Old Guy I knew (probably, again, from Seinfeld).

All these years later, the card shop is the only part of that vacation I remember -- funny how the mind of a collector works sometimes. And even if it may have been a long time in the making, I'm glad I've finally added Keith Hernandez to my cluster of player collections.

But I'm still not driving him to the airport.
Posted by Nick at 3:00 PM

If I ever learn how to make customs I'd do a Seinfeld set. Keith would get a card with the quote "I'm Keith Hernandez!"

What, no "Just for Men" mention. He's been doing them for decades now.

Rats! Should have culled my KH dupes before I sent you the Reddick!