Confessions of an old soul (Vintage from the card show) 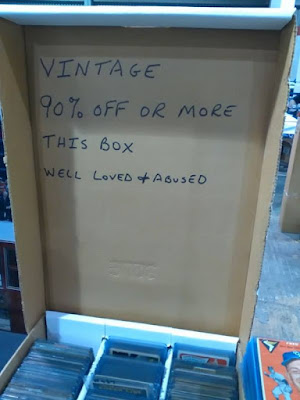 All throughout my life, I've had many people in both my social and virtual circles call me an old soul.

I'm okay with that. Modernity, for all its bells and whistles, often leaves me wanting. And while feelings and artifacts from decades past may not be perfect, they're often the ones I take the most comfort in. It's been that way for as long as I can remember.

Card shows are a perfect example of this. While it's impossible to compare dime boxes to discount vintage -- it's like apples and oranges -- there's a certain extra something that lingers after a stellar haul of cheap vintage. It's almost like I'm transported to the era of whatever cards I'm looking through, and even after the fact, it takes me a few minutes to remember where I am, living in the here and now of 2017 (for better or worse).

The picture you see above is no lie. A vendor I recognized from past shows was back this weekend with his usual 90% Off box of "Well Loved & Abused" vintage. I've built a good portion of my collection out of Abused Vintage, so in I went. He was, in fact, my very first stop of the day.

A dig like this often has a very noir feel to it: I felt like taking long drags on a cigarette with good jazz playing in the background. 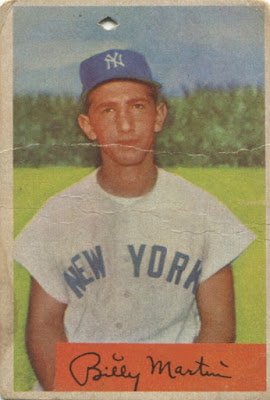 Part of the benefit of blogging is that I can structure my posts however I want: buildups, vague digressions, Saving The Best For Last, etc.

Discount bins, however, follow no such rules. They're liable to shock you at any moment. This abused (yet beautiful) '54 Bowman Billy Martin was actually the very first card I bought from the first table of the day, mine for eight bucks (90% off its $80 Book Value price tag, which is often how these 90% Off tables go).

Never in my life has the first card I've purchased from a show ever packed more of a punch. 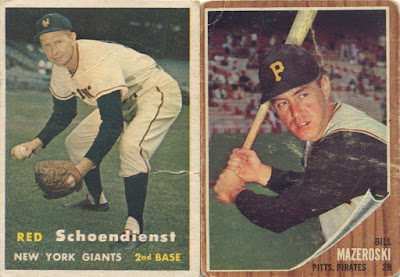 Off I went, further and further into the 90% Off depths.

These two HOFers set me back $2 a pop, and the Schoendienst is notable for being the only card I've ever seen of him with the New York Baseball Giants. 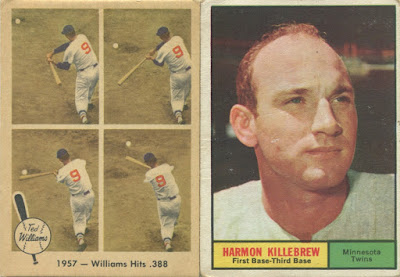 I don't go out of my way to chase cards from the '59 Fleer Ted Williams set -- many of them are painfully dull -- but I think you can see why I couldn't pass that one up. 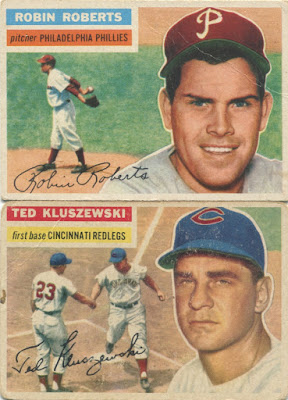 I almost always try to take home at least a couple oversized, pre-1957 Topps vintage from every show, and I succeeded with these elegant pair of '56s.

The Roberts was another 90% Off culprit, mine for the final price of $5, while the Big Klu was one of the better steals of the day at just two bucks. 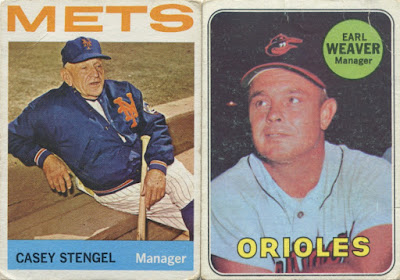 A question: do managers have rookie cards?

I think so, and I finally own Earl Weaver's -- he and Casey were treasured dollar-box finds, because skippers deserve our love too. 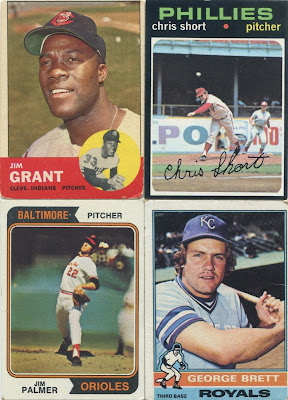 More from the dollar boxes, including Chris Short, who sadly managed to get overshadowed on his own baseball card: that's Pete Rose taking a lead off second base in the background. 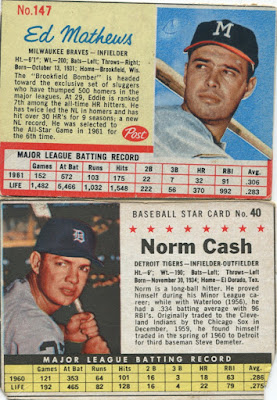 The dollar boxes continue their magic, this time serving up a hearty Breakfast of Champions. 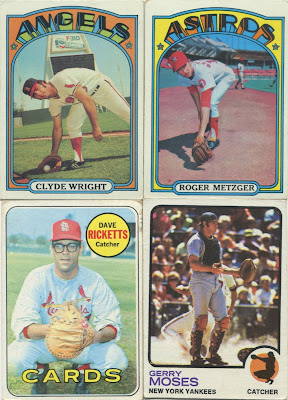 These were the cheapest vintage I bought all day, coming from a 6/$1 box I stumbled upon about midway through the show.

Stars like Ryan, Brett, etc. aside, I've scooped up most late-1960s/'70s cards I need for my many player collections by now. Cheap boxes like these, however, have proven useful lately in introducing me to great shots I missed while I was blinded by my Player Collections Only days, even if I've barely heard of/don't know the guys featured on the front.

Because there's always, always something to be said for a simply fantastic photo. 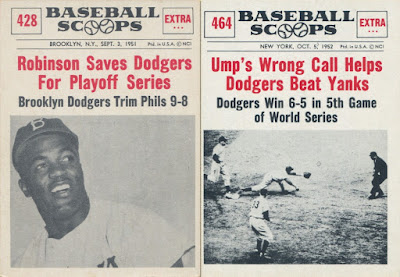 These Nu-Card Scoops oddballs are my kryptonite at card shows: I don't think I've ever passed one up in my life, and the fact that the card on the left was only a buck-fifty made it an especially no-brainer buy. 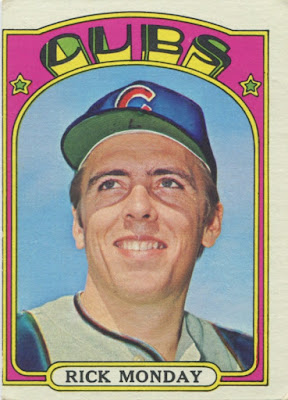 This, a '72 high-number of Rick Monday, was a member of my Elusive Three at this year's National.

I saw it exactly once during that entire show, a low-grade copy priced at $9 which I passed on. Fast-forward a few months to this past weekend, and a guy in just the second aisle with a small-but-shockingly-good discount vintage box had that same Monday waiting for me...for exactly one dollar. 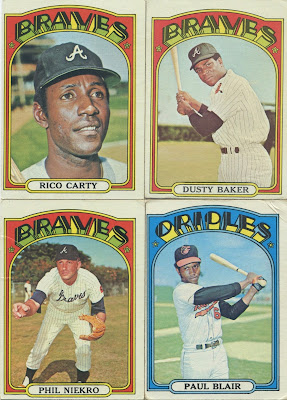 But Mr. Monday was far from the only '72 high-number I'd pluck from that vendor's discount box.

It's always a bit of a pain when guys I collect are assigned Dreaded High Numbers in a vintage set, but I will say that, should I ever be lucky enough to find one in my price range, lassoing those darned high-numbers proves to be all the more sweet.

Dusty here was the priciest of the lot at four dollars, while the others were just a buck or two a piece. 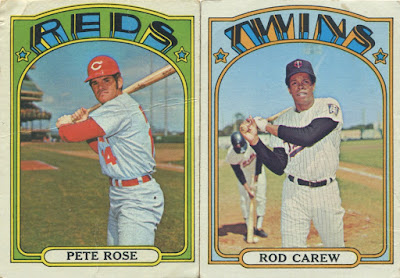 While I was at it, I figured I might as well take down a couple of the most highfalutin of the Dreaded High Numbers.

The Rose is one I never thought I'd see for as cheap as the five dollars I paid for it. The Carew, meanwhile, has long been a Dream Card for me, an iconic shot of one of the game's greatest hitters -- with a little quirk value added by the golfing ballplayer (actually Cesar Tovar) in the background.

At a whopping $12, it ended up being my most expensive purchase of day -- still a small price to pay for making a Dream Card a dream no more. 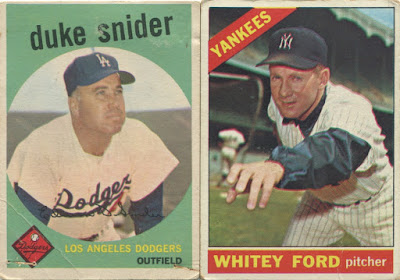 And now we go way back to the days of Duke and Whitey, superstars who probably should've been priced a lot higher than the $4 (Duke) and $3 (Whitey) I paid for them. 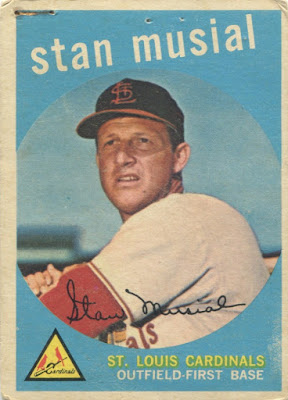 Once again, I came up short in my wild goose chase for an affordable '63 Topps Stan Musial at this show, but Stan the Man didn't remain a complete stranger to the proceedings.

While the '63 might still remain out of my reach, I've managed to find fantastic deals on many of his other cards: I couldn't hand the vendor my money fast enough when I saw this '59 Musial for just nine dollars. 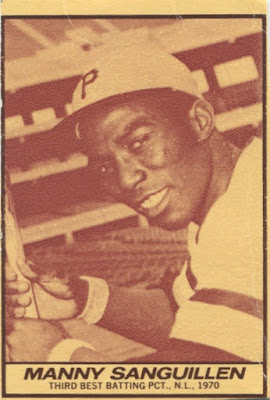 And then there was the final vendor of the afternoon, a mysterious fellow lurking in one of the back corners of the convention hall -- very reminiscent of the overall noir feeling of the discount vintage experience.

This guy had several long white boxes of cards at his table, one of which simply said MISC. ODDBALL and included a cornucopia of vintage oddities rather haphazardly strewn about. It didn't take long for me to find some real good stuff in there, but one major roadblock stood in my way: nothing was priced.

I've mentioned my reservations about vendors who don't price their items in the past but, being an absolute fiend for anything of Manny Sanguillen, I warily plucked this Milk Duds oddity out of the box and continued my journey into the Box of Unpriced Oddballs. 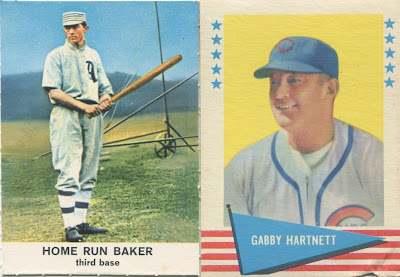 Then came these '60s oddballs of a couple semi-forgotten legends. 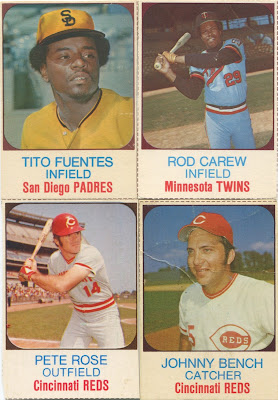 Then I noticed what the box next to the MISC. ODDBALL box said: HOSTESS(!!!).

Briefly forgetting the unpriced cloud hanging over my head, I plucked a small stack of Hostess oddballs out of the woodwork. And while there were some bigtime stars to be had, I think my favorite of the lot was, oddly enough, the Tito Fuentes, a card I somehow didn't even know existed until about a month ago. The garish airbrushing and McDonald's colors are just so quintessentially '70s.

And then I found that what I'd feared would happen had, in fact, happened: I'd stupidly fallen victim to the unpriced minefield of Getting My Hopes Up. 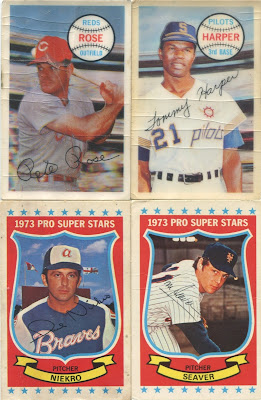 And all that was before I saw yet another box sitting next to the Hostess box, this time labeled: KELLOGG'S.

Oh no. Unpriced or not, I just had to rescue a few precious items from that dark box, including the couple HOF hurlers, yet another Pete Rose, and spectacular 3-D Pilots card you see here.

And one more thing... 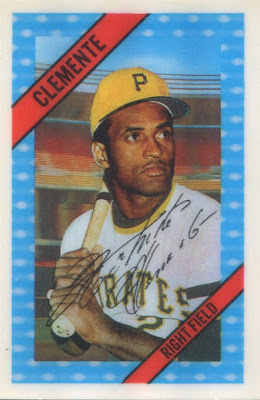 And so, hands shaking and palms sweating, I brought my stack of unpriced oddities up to the vendor, fully ready to have some kind of knife-sharp number thrown back at me. At the very least, I was expecting to have to put the Clemente back, because his stuff doesn't come cheap, and I didn't have much money left on me at the time.

But then the camera flickered, the lights of the convention hall shone bright, and with a low throaty grumble, the vendor uttered two beautiful words: Fifteen Bucks. Hell! I would've paid that for the Clemente alone! Everything else was a pure bonus as I handed over a ten-and-five to the good man behind the table.

The card show as a whole was great, but the roller-coaster emotion of that last table really put a smile on my face as I exited the convention hall with a sly Philip Marlowe grin -- I mean, A KELLOGG'S CLEMENTE. But as I mentioned briefly in my last post, this weekend was a different experience for a few reasons: deep down, part of the reason I was smiling was because I knew the card show wasn't over just yet.

But that's another story (sorry, cliffhanger).
Posted by Nick at 6:19 PM

I feel ya on the minefields of card boxes with unmarked prices. I won’t touch em with a ten foot pole.

That dude was kind of odd...fitting that he had a lot of oddballs!

Damn, you pretty much robbed those vendors lol.

You got that Big Klu for two bucks! That's a heck of a steal! Also, you have the most awesome card shows.

Proud owner of many of those cards or else I'd probably go through with my usual threat to move to the Chicago area because none of these dudes seem to want to display their wares where I live!

That's all I have to say.

There are a couple of locals that set up sporadically at shows that have things like this. They are very "well loved" or "collector grade." I've made some nice pickups, including a well loved Otto Graham that because of the price is one of my favorite "finds."

Kelloggs, and Hostess, and Post... oh my! Nice haul Nick.

This show appears to be one of your best digs.

Jealous of your terrific finds as usual. I think I like the Monday for a buck the best.
What's in the background of the Home Run Baker card? Is that an old school portable batting tunnel? Farm equipment? IDK. Pretty neat either way.

Nice cards. I wouldn't complain about grabbing that lot. Thanks for the post.

Wow, ya gotta love unexpected bargains. Those are the best kind. And dangit, I need one of those Sanguillens too!