A personal history of binders 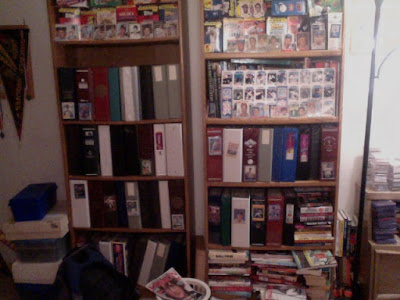 I've been thinking a lot about binders lately, and specifically this image, the first to ever appear on my blog.

That's my room/card lair as it looked the night I started this blog nearly six years ago now (has it really been that long?!). The history of "Dime Boxes" began with my binders because while it's easy to give all the blogging love to the cards themselves, it's worth remembering that to me, it's the binders that really make me feel like I own a collection, rather than a random mix of things I've bought and accumulated.

And as far as this thing I call a collection goes, well... 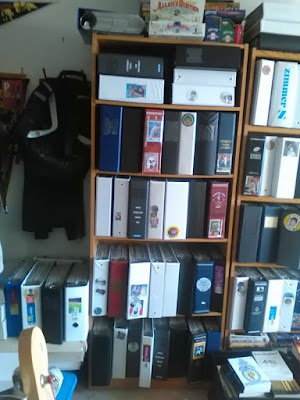 ...let's just say things have changed a bit in the last six years.

How much, you ask? 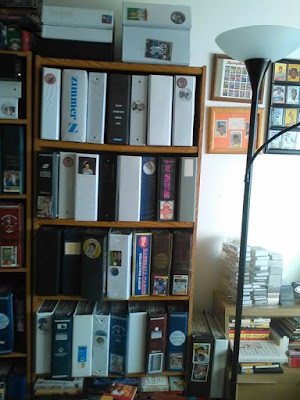 Enough to where all the binders I own can't even fit into a single picture frame, unlike they comfortably did on this blog's Opening Night.
It's fascinating to stop and look at just how much my collection has bloomed in the time since "Dime Boxes" began, and the binders provide the best time-lapse comparison I could ever hope for.

I've said it many times before and I'll say it again: I am and will always be a binder guy. A good 98 percent of my keeper cards are stored in binders. Sure, boxes are the saner option, logistically speaking. Binders cost more money. Binders require more upkeep. Binders take up a lot more space. The proof is there, I'll admit it.

But I'm of the mind that boxes are ugly and aren't proper means by which to store a collection -- binders are, in the aesthetic sense, the only appropriate way to do that. 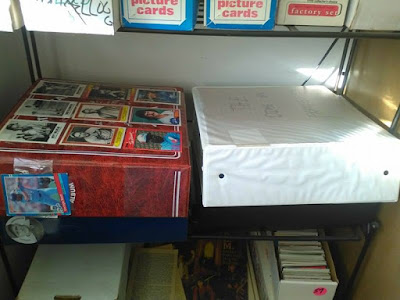 As of this writing, my collection is stored across 82 different binders.

The ones on the bookshelves seen above are home to my array of team binders -- the vast majority of the 31 teams (all 30 current MLB clubs, plus the defunct Expos) have since been split into two, three, and even four different binders due to sheer space limits.

The four you see above are non-team-oriented, housing nooks and crannies such as my smaller number of defunct teams (Pilots, Senators, etc.), jersey/autograph cards, my Hoyt collection, my Dime Box Frankensets (found in that large white binder), and more.

It's astounding to think that the number of binders in my collection has just about doubled in the history of this blog. 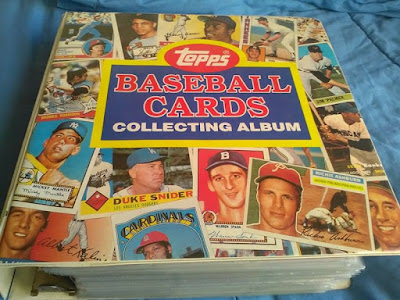 While we don't often think of binders as meaningful objects in and of themselves, I definitely think that binders, like cards, have personality.

If we're just talking about the binders, this is the best one in my collection as far as I'm concerned (it's the first of two Royals binders I have, for what it's worth). I don't know the history on it or anything -- I'm guessing it was a promo item issued by Topps at some point -- but I scooped it up for a couple bucks at the local flea market long ago.

I also, by my count, own five of the actual cards featured on the cover of it, and one day I hope to have them all -- I think it'd make for a nice mini-collection quest, in fact (though I'd likely have to settle for reprints of the '52 Mantle and Mays). 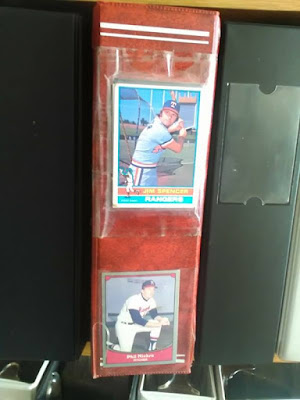 But binders, like people, grow old and wear down over time.

I've had to "retire" many binders over the years, ones that were coming apart at the seams and just generally falling apart, and I still own a few that are on the brink of being sent out to pasture. Despite the random Rangers card I taped to the spine during my youth (Scotch tape on cards: blasphemy, I know, but I was young and dumb), this is actually the first of three Braves binders I own, and it's being held together by packing tape right now.

It's a sad moment when I have to dispose of a binder I've had for many years, but sometimes collecting baseball cards comes with tough decisions. 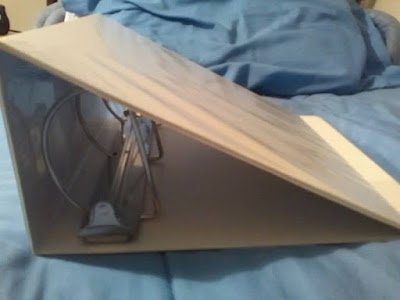 One major binder development happened just last night, in fact, when I came home from work to find this behemoth sitting on my bed.

That, my friends, is a 6-inch binder, a mythical being among the likes of Bigfoot and Nessie that I'd only seen in grainy photos around the 'net and never in the flesh. But now I can attest to their existence first-hand: my mom found one at a local thrift store yesterday (and for only 50 cents!).

But even more fascinating than seeing 6" binder in the first place... 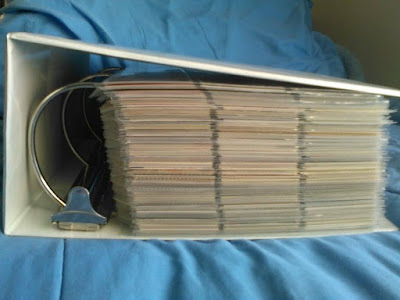 ...is seeing one full of baseball cards, as mine now is.

Perhaps even more staggering is that the small tower of cards in this binder are just Yankee pitchers, a testament to how many stars and/or guys I collect have pitched for the Bronx Bombers.

Makes it all the more ironic that I've never been a Yankees fan, I guess. 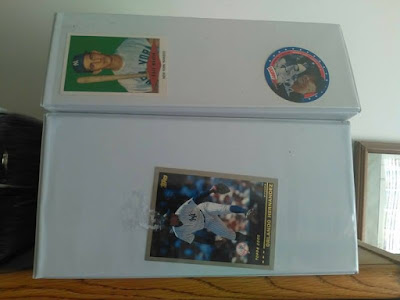 For comparison's sake, here's what a 6" binder looks like against a 4" binder (another one of my four Yankee binders), previously the largest one of its kind I'd ever seen.

My god! It dwarfs that poor thing. 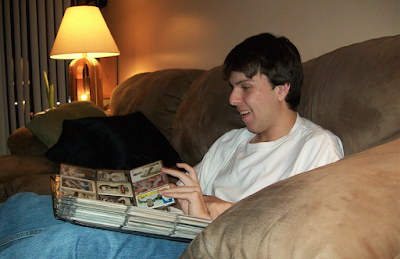 A great many candid photos of exist of yours truly flipping through one of my many baseball card binders, just because it's something I've done quite a bit of over the years.

I suppose my dividing line between an interest and a collection is that an interest is often passive while a collection is experienced. I experience my collection through by binders. They are my passageway into enjoyment, the medium through which I get to live my passion time and time again. Binders are a perpetual slideshow, a visual reward for the years of time and effort I've put into this hobby.

I like the binders over boxes as well...when I was younger,I had even less of a room than you do!

Welcome to the big-ass binders club! I'm still working on the tshirts, so a hearty handshake will have to do, for now. I was lucky enough to snag a couple of those from a previous job a few years back and they've been a collecting lifesaver.

If that was my bookcase, my wife would kill me! I agree, binders are nice but I'm in the midst of an organizational crisis right now, i've got some cards in binders and some in boxes. The binders are beginning to take up a lot of space and I think I'm going to have to go back to boxes and use the binders for my sets.

In my heart I'm a binder guy, but many years of disorganization and many times "giving up" on organization have me with a bunch of binders mixed with many boxes.

If I had the time and money, I'd put the whole collection in binders. But there are more and more 3500-count boxes in my collection, while the binder section is about 60% of a bookshelf.

Great post. I'm a binder guy meself. Was just pricing them this afternoon. Target seems the best for price.

It’s good to see that someone else has a Tom of binders. Helps me realize that I’m not crazy.
That 6 inch binder is sweet! I’ll have to get my hands on a few of them.

Awesome post. I'm so jealous. In a perfect world, I'd have enough space in my office to house my entire collection (w/the exception of my high-end stuff) in binders. At the bare minimum, I'd love to display all of my complete sets in them.

Gotta agree - thrift stores are a great place to find gently used inexpensive binders if one is not too fussy about things like colour. I have also found them with card pages in them which is like a bonus. Binders being discarded at work is another place to obtain.
I don't think that I have ever seen a six inch binder. I didn't know that they existed.

82 binders? I'm obviously not doing it right. Wow! I love finding out how bloggers store their collections. Thanks for sharing!