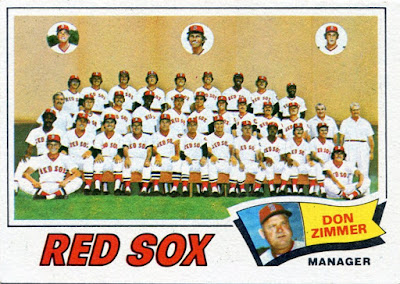 I feel like I should have more of an opinion on the Red Sox than I actually do.

True, between the generations-long futility and their uncanny ability to break hearts in ways no other team could, the Sox are kind of like an American League brother to the Cubs (or were, as both teams have since shattered their curses). And aside from possibly the Yankees, no team has been shoved down my throat more than the Red Sox with the endless national coverage they receive.

While the Sox have more history and tradition than just about any other franchise in sports, I've never found myself actively rooting for or against them. They're another team that I might've followed a lot more closely had I grown up in a different generation, as many of my favorite players (Yaz, Spaceman, Pudge) had their prime years in Boston.

Still, for every Yastrzemski, there's a hundred guys who have been long forgotten as Red Sox, several of whom earned a spot on tonight's Short Term Stops roster. 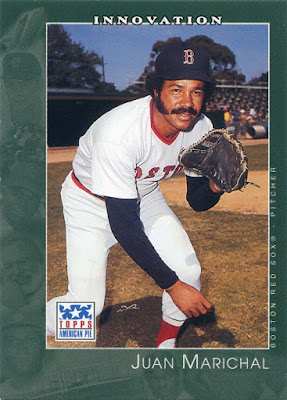 Heading the star-studded staff of the Red Sox is Juan Marichal, who ended up in Boston after a number of stellar seasons with the Giants.

The Dominican Dandy was on the downslope of his Hall of Fame career by the time he hooked up with the Red Sox in 1974. The then-37-year-old pitcher posted an unspectacular 4.87 ERA in 11 games (9 starts) with Boston, collecting the final five of his 243 career wins in the process.

Marichal would sign with the Dodgers in 1975 -- the team he literally clubbed at one point -- but retired after getting shelled in his two starts in Los Angeles. 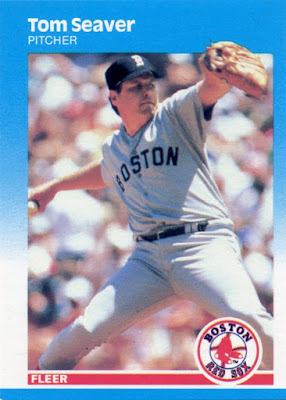 Like Marichal, Tom Seaver was another legendary pitcher who briefly surfaced with the Sox near the end of his career.

Sent to Boston by the White Sox for Steve "Psycho" Lyons in midseason, Seaver provided experience to a World Series-bound Boston club in 1986. The numbers, however, were mediocre -- a 5-7 record with a 3.80 ERA in 16 games -- and Tom Terrific didn't pitch in a single postseason game for the Red Sox during the club's doomed trip to the Fall Classic that year.

Seaver retired after an aborted comeback attempt with the Mets the following season, leaving the Sox as the team with which he'd finish up his Hall of Fame career. 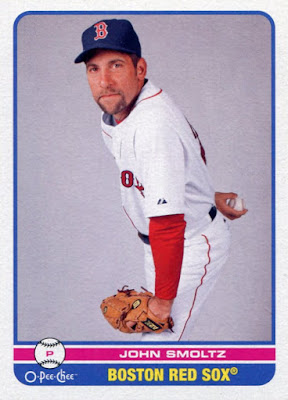 Though it wasn't intentional on my part, John Smoltz makes it official: all three pitchers on this Red Sox roster eventually made it to Cooperstown.

Smoltz, a 2015 HOFer, spent the first 20 years of his career as a Brave before signing with the Sox in 2009 for his age-42 season. It wasn't a stint to write home about: Smoltz was lit up in Boston, going 2-5 with an awful 8.33 ERA in eight starts before being released in August.

He'd finish his career in St. Louis after the Cardinals picked him up off the scrap heap, meaning that Smoltz earned the unlikely distinction of pitching for two teams in his final season after having spent the previous two decades with just one. 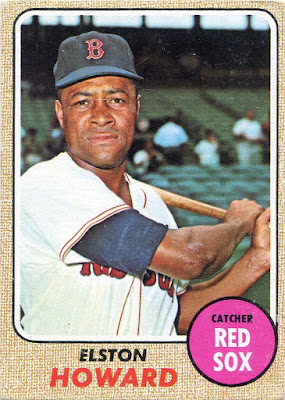 I have a handful of catchers in my binders who appeared in less games than Elston Howard did in Boston, but none of them can match the massive unfamiliarity of seeing the former Yankee catcher as a member of the Red Sox.

It's always jarring when a player jumps from one side of a rivalry to the other (a recent example would be Jim Edmonds as a Chicago Cub), and Howard is no exception. The backstop spent part of 1967 and all of '68 in Boston, hitting just .207 with six homers in what would be the final 113 games of his illustrious career.

I remember thinking there was some sort of mistake when I first discovered Howard's sunset card from '68 Topps -- no way did he ever play for the Red Sox! -- but alas, it's true. 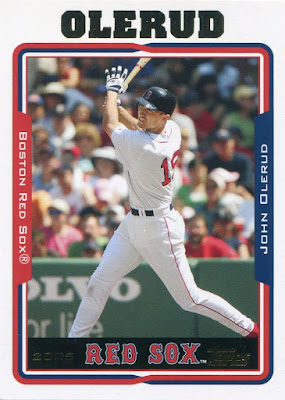 John Olerud has long been a top-tier player collection of mine, and though I don't necessarily equate him with a single team (he's almost equally a Blue Jay, Met, and Mariner in my mind), the sight of him with the Red Sox has never seemed quite right to me.

Olerud was thrust into the Boston spotlight in 2005, hitting .289 in 87 games while receiving limited playing time at first base in what would be the sunset season of what seems to me to be an often overshadowed career. 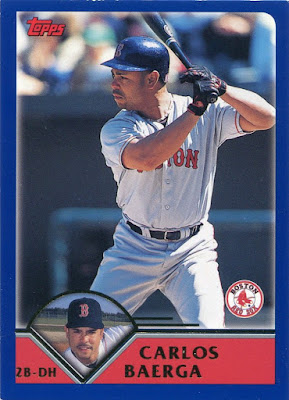 Speaking of underrated hitters of my youth, here's Carlos Baerga, a one-time star who was among the most dangerous members of those monster Cleveland clubs of the 1990s.

By the time the new millennium came around, however, things looked tough for Carlos. He was completely out of the game in 2000 and split his 2001 season between the Korean League and independent ball. The Red Sox took a shot with Baerga in 2002, and he rewarded them with a solid comeback season, hitting .286 in 73 games as a part-time player that year.

Baerga would hang around the bigs until 2005, and he owes much of his twilight years to the Red Sox, a team that breathed life into a career that looked to be left for dead. 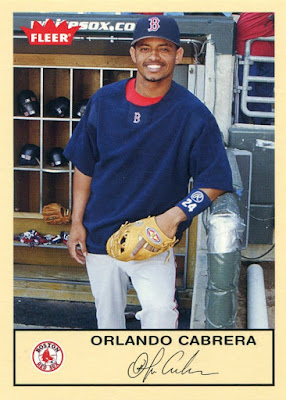 The Red Sox finally Broke The Curse in 2004, and their pickup of Orlando Cabrera at the deadline that year was one of the moves that advanced the club further down their hallowed path.

Cabrera was dealt to Boston as part of a controversial three-team deal that saw fan favorite Nomar Garciaparra sent to the Cubs. The move, in hindsight, was likely the right one: Nomar was never again a star, and though his time in Boston was brief, Cabrera proved to be a key cog in the World Series club in '04.

He hit .294 in 58 games to close out the year -- and, more importantly, posted a .379 clip in Boston's legendary three-games-to-oh comeback against the Yankees in the ALCS -- to cement his place in Red Sox lore. 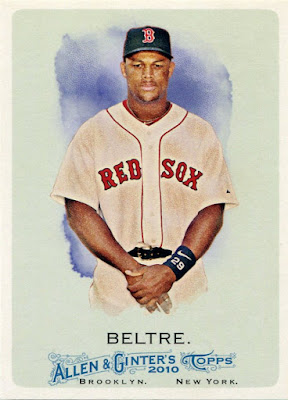 It seems almost hard to believe now, but Adrian Beltre was thought to be on the downswing of his career when he hooked up with the Red Sox.

After failing to live up to a massive contract with the Mariners, Adrian signed with the Red Sox as somewhat of an afterthought in 2010. That change of scenery put him back on the map, as he posted a stellar .321-28-102 line in an All-Star season with Boston.

He parlayed that success into another big contract with the Rangers the following offseason, and I think we'd all agree that he's lived up to that one: if you look at the numbers, the guy's a future Hall of Famer. 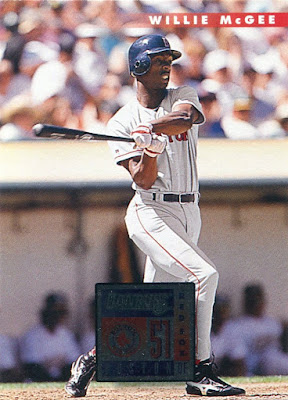 In a case where the hobby informed my knowledge of the game (instead of vice versa), I had no idea Willie McGee played for the Red Sox until I stumbled upon his 1996 Donruss card.

McGee spent just a single mediocre season in Boston, hitting .285 with just five stolen bases in 67 games with the '95 Sox. There's not much more to say about it apart from that.

Things did get better for Willie following his forgotten stint with the Red Sox, however, as he spent the next four years with the Cardinals in St. Louis -- the city where his career began -- posting a couple more .300 seasons before retiring in 1999. 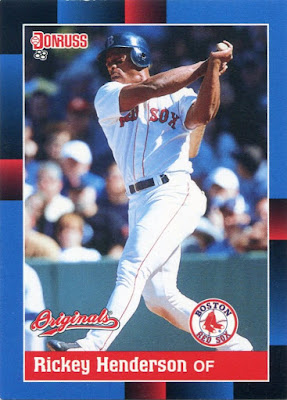 Rickey Henderson was well on his way to Cooperstown when he showed up in the actual 1988 Donruss checklist (as a Yankee), yet his career was on its last legs by the time he appeared on this tribute to '88 Donruss a whole 14 years later.

Rickey latched on with the Red Sox in 2002, the eighth of nine teams he'd play for during his legendary 25 seasons in the bigs. The 43-year-old Henderson hit just .223 with eight steals in 72 games in Boston, though he did walk at his usual clip as his .369 OBP for the year would indicate.

He'd join the Dodgers for what would be his final season in 2003, although I'm sure Rickey would tell you that he could come out of retirement and help a big league club right now. 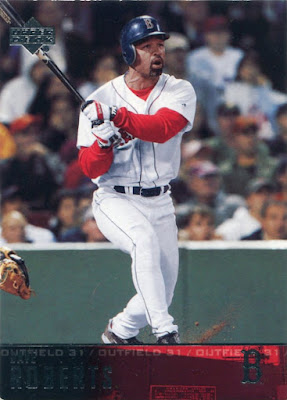 Though he stole the most important base in franchise history, Dave Roberts' Boston career is criminally underrepresented on cardboard: in fact, this is the only card I own of him as a member of the Sox.

Like Orlando Cabrera, Roberts was another of the under-the-radar deals that helped catapult Boston to its eventual World Series victory in 2004. The Sox got him for peanuts from the Dodgers at the deadline, and he became a valuable piece off the bench, hitting .253 in 45 regular-season games before his immortal stolen base against the Yankees in the ALCS.

While he's quickly become one of the better managers in the game with the Dodgers these days, I'm sure a lot of fans remember him, first and foremost, for The Steal. 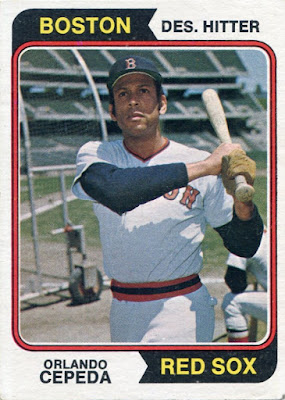 Orlando Cepeda assumes his role as the fifth and final (current) Hall of Famer on this stellar Red Sox squad.

Cepeda's lone season in Boston was a solid one, as he posted a .289-20-86 line in 142 games while playing some newfangled position they called Designated Hitter in 1973. Cepeda was one of the first to reap the benefits of the DH rule: he couldn't much play the field during the later stages of his career, but he could still hit with the best of them.

While this is Cepeda's sunset card, '73 wasn't his sunset season, nor were the Red Sox the final team he'd play for: the future HOFer appeared in 33 games with the 1974 Royals before being released in September of that year, a stint that (to my knowledge) has sadly never been immortalized on a baseball card (which makes it prime fodder for the Cards That Never Were category).

Thanks for tuning in.
Posted by Nick at 6:38 PM

I've been looking forward to this one for a long time. You did not disappoint. Thanks for the post. I don't think I would disagree with any of your choices. There are players with better seasons (Nick Esasky over John Olerud, Luis Alicea or Mark Loretta over Carlos Baerga), but the notoriety of the players is what is important here.

I too have been waiting for this one. Well done Nick.

For some reason my brain never registers that Smoltz played for the Red Sox even when I remember him finishing with the Cardinals.

Great post! I had forgotten about a few of those guys...

Here is one you missed. Even though no card exists Rollie fingers was a red sox for 3 days before the trade was voided.

Here is a site with pictures.


Up next should be my team. The Colorado Rockies. Might I suggest two players you do be Jason Giambi and Roy Oswalt. Go to tradingcarddb.com to find cards of them as Rockies.

It wouldn't be cheap, but there's a 1960 Topps Bobby Thomson with the Red Sox. He played 40 games there. (He then finished his career with three games as a Cub, but I don't think there are any cards of him as a Cub.)