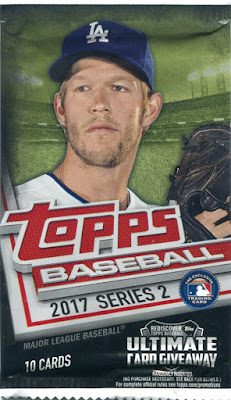 It's risky to walk into a Target at three o'clock on a Saturday afternoon.

Against my better judgment, however, I did just that over the weekend, running the risk of people coughing on me (which happened), screaming kids running in circles around me (also happened), and having carts from impatient customers bump into my backside while waiting in the checkout line (also happened).

And to think I did all this in search of Series 2, generally the most boring of the three Flagship series in what has already been a pretty boring year for Topps. Lo and behold, my Target had them in stock. I grabbed a blaster and a couple rack packs and counted the seconds to when my turn came at the cash register.

But then something else happened, something I wasn't expecting. 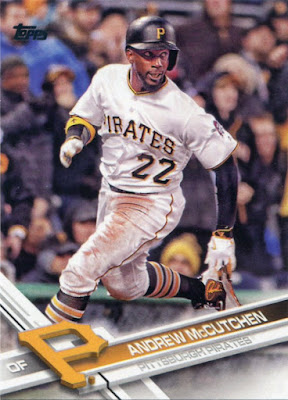 I bumped into an old friend from school, someone I hadn't seen in years.

This friend is significant to me and the hobby because, in my 25 years on this earth, he's the only person I've been able to single-handedly convert to card collecting. He and I collected together for about a year during 8th grade and early high school before he eventually lost interest to the usual adolescent distractions.

After the usual How's it going and Been a long time and How's work greetings that usually color the brief rekindling of past friendships, he noticed the Series 2 packs in my hand, and we got to talking about our old times the hobby. 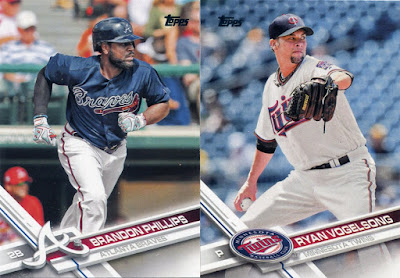 He told me with pride that he still had some of the better cards from his collecting days -- notably, a Scott Podsednik printing plate and a Jermaine Dye jersey card (he's a Sox fan, if you can't tell) -- and considered the possibility of digging them out of his closet one of these days.

At some point, I mentioned that Topps was the only game left in town. He was floored when I said this. Topps was the far-away #1 in the hobby when we were collecting, but I have fond memories of us buying packs of other products at the time. 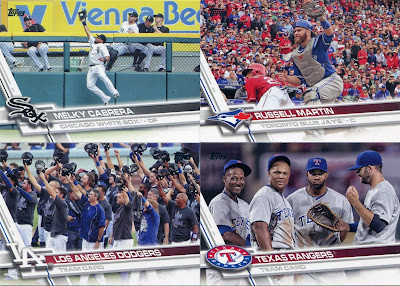 In an odd way, sometimes it takes a conversation like the one I had on Saturday to truly realize how much things can change while generally staying the same.

There I was in a Target checkout aisle holding a bunch of baseball cards in my hand while my friend picked a Monster energy drink from a nearby cooler, unaware of the news that Fleer had gone out of business. How different things might've been had I given up the hobby all those years ago.I was thinking about my old friend the entire time it took to open my first packs of Series 2.

Despite this year's underwhelming design, Series 2 did manage to provide the pack-busting thrill I still treasure to this day, with a few unexpected surprises: notably that the Dodgers team card you see above, which is now and forever the king of my "tip of the cap" mini-collection. 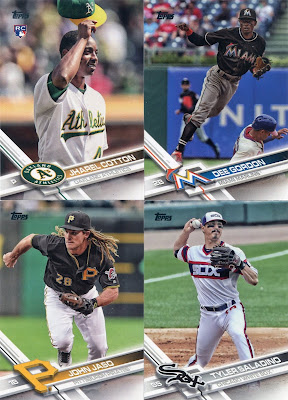 One of the fringe benefits of Series 2 is that it's the only set around nowadays that's able to provide scarce high-numbers in the 400-600 range for my frankenset.

Three of these (Cotton, Gordon, Saladino) fit nicely into my mini-collections, but John Jaso and his white-guy dreads are frankenset-worthy since they're kind of like a car accident: you don't want to look, but you just can't help yourself. 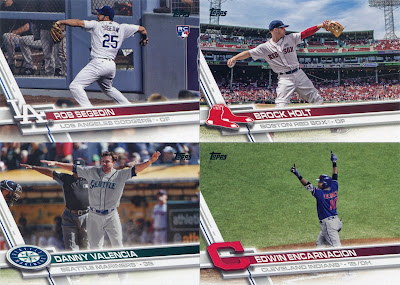 I think the 2017 Topps design works best with the horizontals, and all of these are sure to warrant strong consideration for the frankenset. 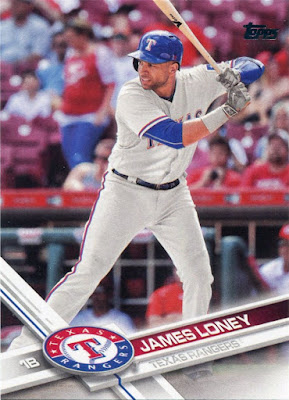 This, however, was probably the best of the base cards I pulled on Saturday.

On the surface, it doesn't look like anything special. A card of an aging veteran who hasn't cracked a big league roster in 2017. Though it's a decent airbrush job on the part of Topps, I know with 100 percent certainty that James Loney's Rangers jersey is, in fact, a creation out of Photoshop.

Why? Because Loney never played a game with the Rangers. Indeed, he signed with Texas prior to this season before being released at the end of Spring Training. He's currently jobless after a brief stint in the Braves' system. 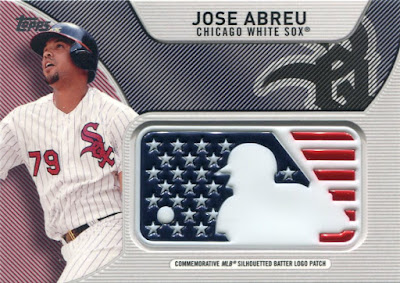 The theme of Series 2 seems to be an all-uppercase AMERICA.

These commemorative flag patches fall one per blaster, and though it's not a terrible card (notably thinner than a lot of past manu-relics), I have no intentions of keeping it. 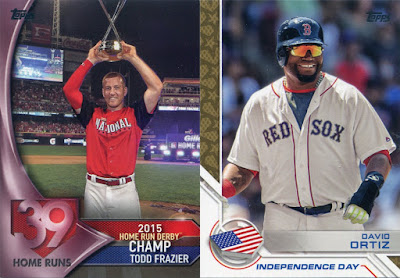 These are exclusive to retail packs, including a special Salute-style set dedicated to Independence Day jerseys...because AMERICA. 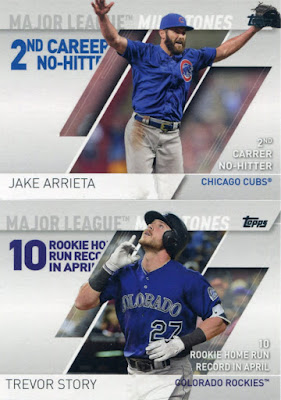 Not sure if these are retail-only or not, and I don't really care because they're painfully boring. 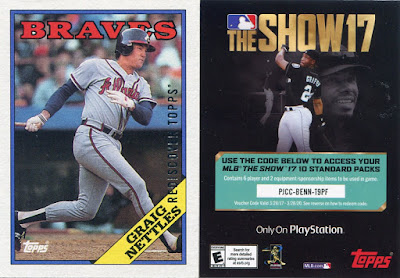 Believe it or not, I actually pulled a semi-interesting overproduction-era buyback: one of my packs allowed me to REDISCOVER the final card Graig Nettles would ever receive from Topps.

I've said this before, but my dad is (and has always been) of the mindset that advertisements aren't baseball cards.

I couldn't disagree more: you can bet your behind I'll be adding that MLB The Show ad to the rest of my Griffeys. 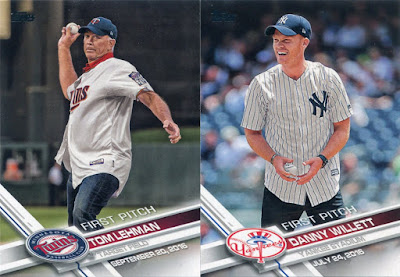 Chet Steadman aside, I have no real interest in any of the First Pitch inserts from Series 2, and that included the only two I pulled from my Series 2 packs: a pair of golfers I'd never heard of.

Obviously, I am not a golfer. Inserts revolving around the All-Star Game are always good with me, especially when companies use photos that, you know, actually come from All-Star Games, which both of these appear to do. 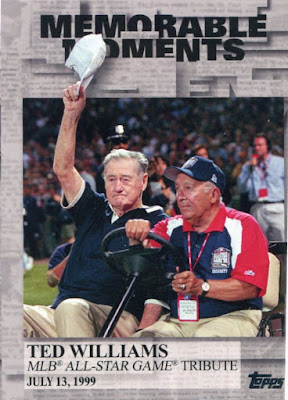 But my favorite pull of the afternoon had to be the card you see above, one that documents perhaps the most memorable of all the All-Star moments our National Pastime has had to offer.

The design, like most of the inserts I've shown thus far, is crap (gray does not work on a card design, Topps!), and to top it off, the copy I pulled is oddly miscut.

But despite all the efforts to the contrary, nothing can prevent my affection for this card. Shockingly, it's the first one I've ever seen featuring Teddy Ballgame's touching farewell to the game he loved so much.

Cards -- like hobbies, like friends, like myself -- change as the years go by. But part of the reason I think I've stuck with collecting is that I simply haven't found anything else that thrills me as much as the gratifying snap I hear when I open a pack of baseball cards. No, Series 2 isn't going to have me rushing back to Target for more and more helpings of it.

But it's good to know that -- despite the fluidity our lives often have -- they're there, waiting for me whenever I need them again.
Posted by Nick at 6:16 PM

It's interesting that Topps airbrushed Ted's cap in that 99 picture. I remember a kerfuffle at the time because he wore a 'hitter.com' cap to promote one of the efforts be his deadbeat son to profit on his legacy instead of a real Red Sox cap.

They put an American flag pin onto a card of Jose Abreu....a Cuban. Seriously, Topps?

I know you're happy about the 0-year Loney card, but I'm kind of flabberghasted by it. Some of Topps' decisions are just quite puzzling... (including what Josh mentioned above.)
Thanks for sharing your S2 cards! There's not nearly as many blogs showing off S2 as there was S1.

Cool stuff...you'll probably get more from my "damaged" connection!