My memory isn't as good as I remember 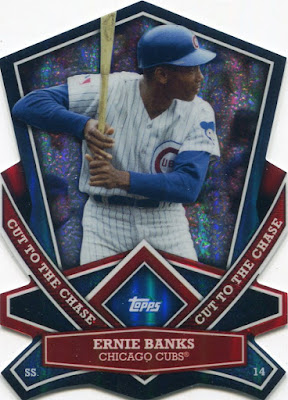 It's always a joy to add a new blog to the blogroll, and I got a chance to do that recently when I discovered one called "Summer of '74."

It's run by a Brewers collector named Matt, a prolific writer who already had a few published books under his belt before he joined our blogosphere (which makes me an instant admirer of his). Matt opened a box of 2013 Topps on his blog a while back, and pulled a couple Ernie Banks inserts which I admired from afar in the comments section before Matt asked if I wanted them.

You know my response: Do I! I'll never pass up the opportunity to add two Mr. Cubs to the archives. Days later, the pair of Ernies wound up on my doorstep, and when I went to place them into my Cubs binder...I promptly discovered that I already had one of them, the fractured "Cut to the Chase" insert seen above.

This kind of memory slip never used to happen to me, so I had to ask myself (only half-jokingly): am I going senile? 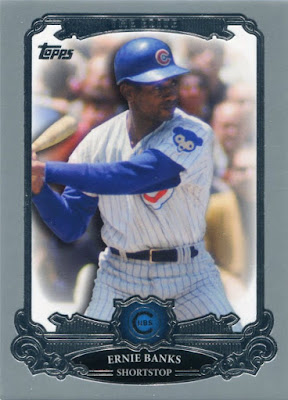 Thankfully, the other Mr. Cub card was all-new to me: in fact, this is the first subject from the 2013 Topps "Elite" insert set I own, period.

It's super thick -- and thus a bit of a pain to slip into a nine-pocket page -- but still a beautiful card I'm proud to have in my collection. 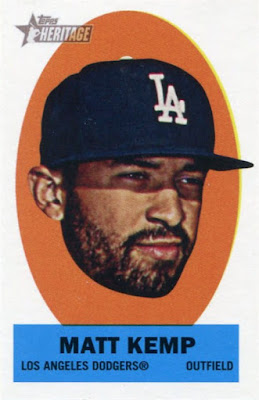 But back to the whole memory thing.

Matt had already sent me a trade package a little while before I received the two Mr. Cubs, and this one wasn't immune to my newfound cardboard senility, either. I pulled this Matt Kemp Heritage insert out of the package and said to myself: alright, cool! A floating head! It'll look great in the Dodger binder.

If the Banks story is any indication, you probably already know what happened next: I already had it. This development was far more troubling to me. How could I forget I had a floating head? I can see mixing up a couple Ernie Bankses, because they use the same three pictures on a lot of his cards. But a floating head?

I've always prided myself on having a fairly good memory when it comes to my baseball cards, but maybe that ship has sailed by now. 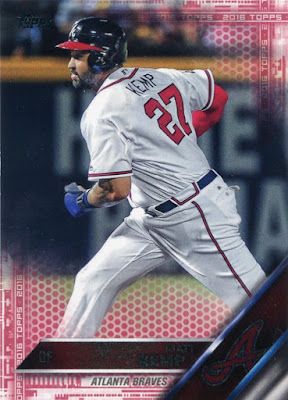 I pulled this card from Matt's package, scanned it, and placed it in my Atlanta binder under the impression that this was a gold parallel of Matt Kemp's first card as a Brave (from 2016 Update). Not until a couple days later during an unrelated trip back through my Braves binder did I realize that that wasn't what Matt had sent. That is not what he had sent at all.

No, this is actually a pink parallel from 2016 Update, limited to a far more scarce print run of just 50 copies, making it the rarest card in my Kemp collection by a wide margin. And I almost didn't even know it.

What is happening to me? 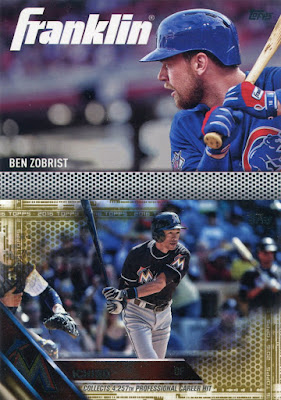 My fading memory didn't mix up the rest of what Matt sent, thank God.

The Zobrist comes from the astonishingly dull "Franklin" insert set, but a card I'm happy to add to my growing collection of Zorilla (even though I'm not a huge fan of that nickname). And unlike the aforementioned Kemp, the Ichiro is indeed a gold parallel from 2016 Update I needed. 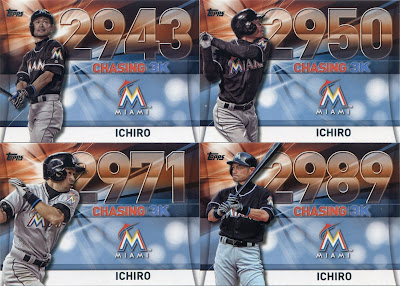 Though quite redundant, I certainly won't refuse any of these that come my way, if for no other reason than that they allow me to pad the numbers of my Ichiro collection. 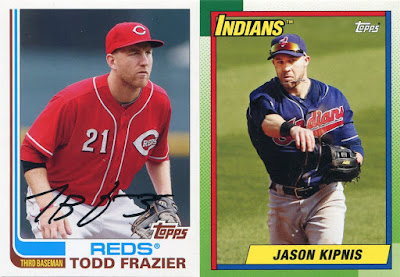 A couple Archives singles for a couple of my newest player collections.

This is also good reminder that I don't know what the heck Topps was trying to pull by featuring the '82 set in two different Archives sets -- the Frazier is from 2013 -- when there's so many designs they have yet to honor (ahem...1981). 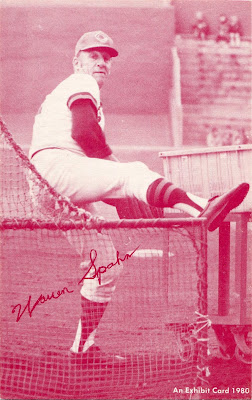 But here was the unquestioned star of Matt's inaugural trade package, a gem chock full of so many new facts for my fading memory that I needed to make a list to remember.

1) I had no idea Warren Spahn was ever affiliated with the Indians' organization, but apparently he served as a pitching coach for the franchise for two years in the mid '70s.

2) I thought the postcard-sized Exhibits brand was solely a product of the '50s and '60s, but as the trademark on this card indicates, the set survived until at least 1980.

3) Warren Spahn still employed his famous high leg kick well after his long playing career was over, a windup that causes me to dislocate a hip just looking at pictures of it.

All in all, a banner couple of packages from Matt, a person I'll definitely be trading with again in the future and someone whose blog you should go follow right now if you haven't already.

In the meantime, I'll just be sitting in the rocking chair on the front porch, praying I don't start accumulating doubles of baseball cards I already own.
Posted by Nick at 6:14 PM

Thankfully (depending on how you look at it), my memory has ALWAYS been spotty, at best. So, I don't have to ask myself such questions. However, I'm sure that I'll be a blast in my golden years.

Excellent trade haul too, regardless of how much you can recall. That Spahn is a true gem. Is there a pink gemstone? If so, that's what it is.

Love that Spahn!...and,considering how many gazillion cards you have,a few dodging your memory is nothing to worry about!...sometimes I don't know what DAY it is,ha-ha!!

If the subject line isn't a Yogi Berra quote, it *SHOULD* be!

I wouldn't be too concerned about your memory... It's probably more about "too much data" than "not enough brain cells".

At least you remembered to send me a package in return! Anyway, I'm glad you enjoyed the cards and that they are making you lose your mind.

great cards Nick! If your ship has sailed then mine has surely sunk. During my recent sort-a-thon, I found I'd purchased the same card three times, and several others twice!