Don't care how, I want it Now 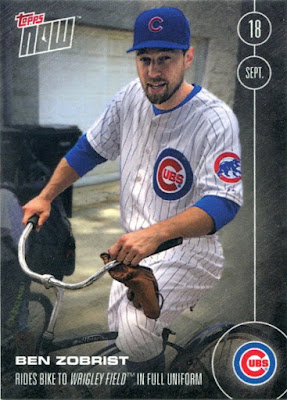 I'm only about a year late in posting about this, but it's finally time to rehash my journey through the world of Topps Now.

Unless you've been hiding under a rock, you probably already know the deal with these things: they're made-to-order cards based on big moments from the preceding day's baseball action, sold exclusively through the Topps website for $10 a pop.

My initial reaction was (like many others I'm sure): $10 EACH?! I'm not touching these things. And I truly thought that'd be it...until my dad surprised me with the Zobrist Topps Now card you see above one afternoon last year, which he'd seen mentioned on a local news broadcast.

While it's not exactly a heart-pounding moment -- Zobrist is seen here riding his bike to Wrigley through a Chicago alleyway, much like the hundreds of alleys I biked down during my childhood -- I'm glad I have it.

The card received some flack at the time of its release, but for me, it's great for the quirkiness that so much of my collection revolves around. 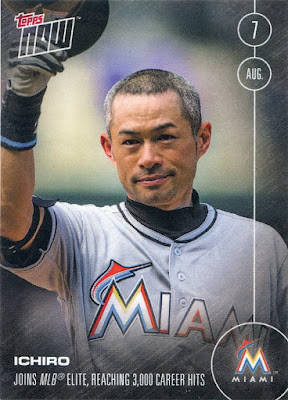 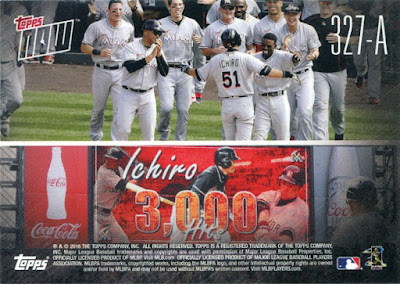 After that, the Topps Now bug had bitten me, if only slightly.

I soon found out that you could find many of the singles for well under the $10 retail tag on Ebay, thanks to sellers who receive volume discounts on bulk orders from Topps. Thus, I pulled the trigger on Ichiro's 3,000 hit celebration, which snagged for around $6 shipped. It's a great card -- front and back -- and it chronicles a crowning moment from my very favorite player in the game today.

Call me a sucker, but I had to have it. 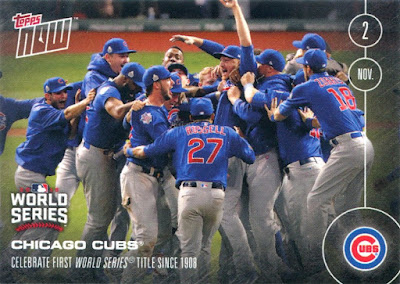 I guess nothing that big happened in 2016, you know, apart from that whole Cubs winning the World Series thing.

In hindsight, Topps picked a helluva year to launch Topps Now: I had no choice but to purchase the made-to-order card that brought the euphoric Series-clinching moment to cardboard, one that I crowned Card of the Year for 2016. 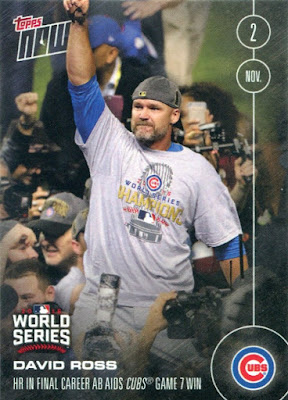 But I wasn't done there.

Along with the celebratory team shot, I picked up this heroic image of Grandpa Rossy being carried off the field following his final big league game in the wee hours of November 2nd.

Both Cubs Topps Now cards ran me a little over $6 a pop, and this one instantly became the centerpiece of my collection of perhaps the most famous backup catcher of my generation. 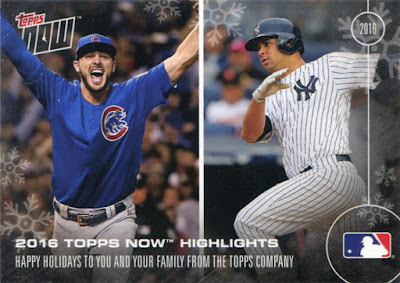 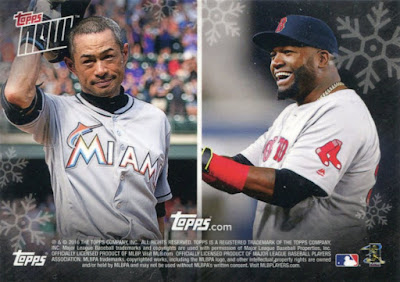 My dad, like me, didn't know that the Topps Now singles could be had at a discount on Ebay, but in the end, his ordering the Zobrist directly from Topps turned out to have some benefits.

That lone card apparently put him on Topps' mailing list, because my dad received this bonus holiday-themed card around Christmastime last year, a star-studded Bryant-Sanchez-Ichiro-Papi quartet. 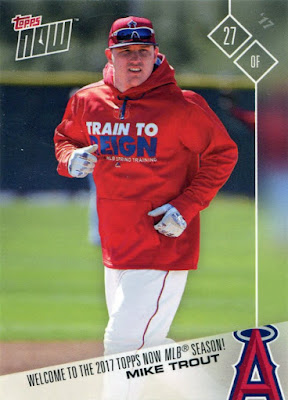 Turning the clocks to 2017 Topps Now resulted in another unexpected surprise from Topps.

My dad found another envelope from Topps in his mailbox right around the dawn of Spring Training in February. This one featured the debut of the 2017 Topps Now design (solid) with none other than Mike Trout himself.

The card is actually a coupon for 25% off one of the Spring Training team sets from Topps Now, but even with the gracious discount, I never seriously considered buying one.

But I'll sure take the bonus Trout for my binders. 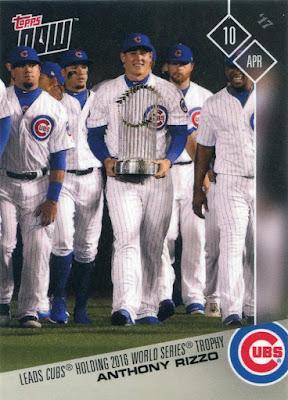 So far, I've only broken down and bought one Topps Now card this year.

Again, it relates to the Cubs' 2016 World Series victory, featuring Anthony Rizzo leading his club onto the field with the glorious Commissioner's Trophy in the flesh -- the first time the hardware has seen the light of day at Wrigley in the 100-plus year history of the ballpark.

My thoughts on Topps Now aren't much different than most of the others I've read: a great idea, but a tad too pricey for my wallet. I have a hard time forking over more than a buck or two for any modern card, so something in the $6-$10 range is something close to a king's ransom.

Yet, for a Cubs fan like myself, it couldn't have happened at a better time, because it turned out to be a perfect opportunity for collectors who wanted their piece of the moment...NOW.

No need to scream.

I was proud that I avoided it last season, but couldn't resist the Chris Coghlan Superman flight this year.

Glad I played a part on your road to Now-sville...

I resisted until the WBC Adam Jones robbing Machado card - it's AWESOME. I bought a Chris Davis card a few weeks ago...right before the O's started to tank.

Cool collection. Topps Now isn't really my thing. Although... I will buy a card on the secondary market if I was actually at the game.

I'm a fan of Topps NOW. I get upset at certain aspects like photo choice and what moments are chosen, but for the most part I've enjoyed it.

I think it has a place in our hobby, but it is tough to fork over that kind of cash for one card.
My biggest fear is that they are using some photos NOW, which would have been seriously outstanding within the Stadium Club line. So it goes, I guess.