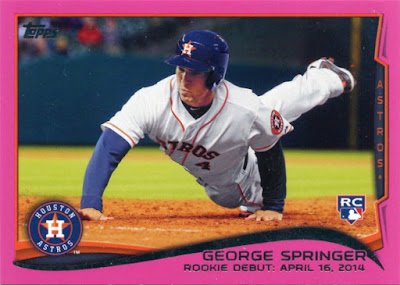 Sometimes, I get a bit worried when someone new approaches me for a trade.

Don't get me wrong, I'm always excited to send and receive cards in the mail, but I've never really known how to answer the question I inevitably get in any potential trade email: So what do you collect?

As was the case when Shane K. of "Off the Wall" dropped me a line recently. I knew of his blog and had seen his name pop up in quite a few trade posts as of late, but this was the first time the two of us had been in direct contact. As for what I collect: believe it or not, I'm much better at compiling specific want lists now than I once was (I don't know how in the heck anyone traded with me in the past).

For all my randomness, I do have a somewhat organized page of set needs (actually player needs in disguise since I'm not a set builder), and I directed Shane to that page soon after we'd decided to strike up a trade. 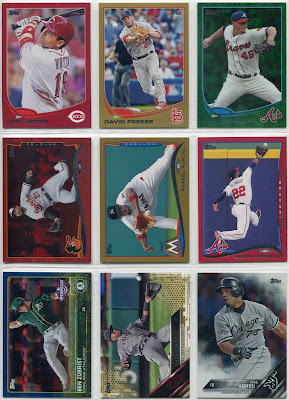 Parallels are a surefire way to my heart, and Shane certainly made his presence known there.

In addition to the glorious George Springer pink parallel (numbered to just 50 copies) at the top of this post, Shane threw in a cornucopia of reds, golds, emeralds, etc., all of which will look beautiful in my binders. 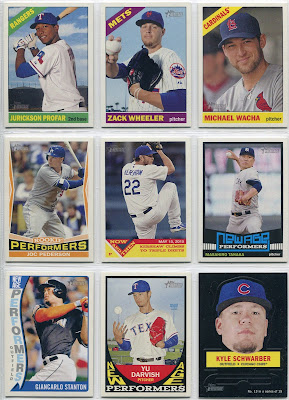 Shane went for the jugular on my Heritage want lists (dig the Schwarber floating head!), and he'd reminded me of something I'd forgotten: that I do actually still need regular old base cards from as far back as 2015 Heritage. 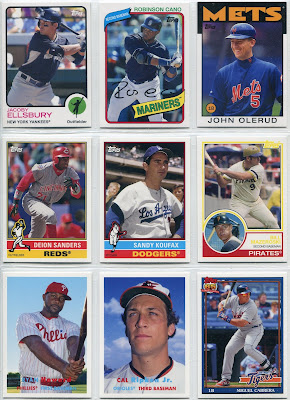 Next up on Shane's hit list was a mess of Archives.

I was specifically glad to see the Olerud fall out of this mailer since Topps decided to short-print that card back in 2014, a dastardly deed that caused me to wait three long years before it finally arrived in my collection. 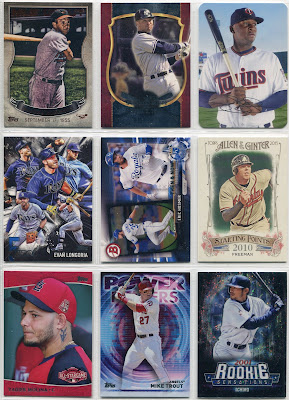 Rounding out the want list barrage was a stack of recent inserts from Topps and its various incarnations. 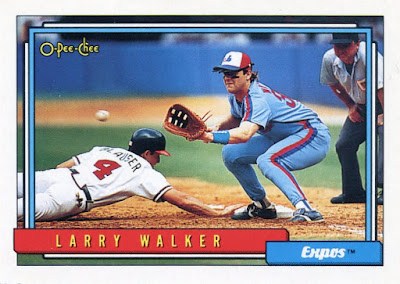 Here's where trading with me can, admittedly, feel a bit tricky.

Apart from my want lists, I usually tell new trade partners that I'm more than willing to accept any card he/she deems fun or interesting. Now, this can mean a lot of different things, and I worry such openness leaves people wary or unsure, much like the rare teacher in school who would let us take open-book exams.

But what I'm about to say is the absolute truth: never once have I been let down or disappointed by the random cards I've received from others. That's precisely why I use words like fun and interesting: because the terms leave themselves open to a wide variety of interpretation. So, after Shane's annihilation of my want lists had been completed, he went to work on the random side of things.

Is a horizontal action shot from '92 OPC fun and interesting? You bet! 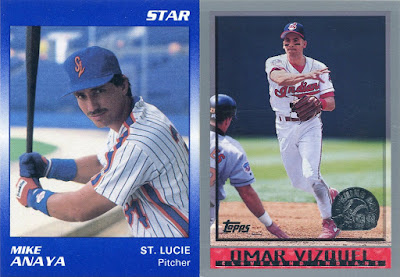 New mini-collection hits: always a treat, and perhaps a bit easier to spot now that I've added a visual guide to the header of this blog. 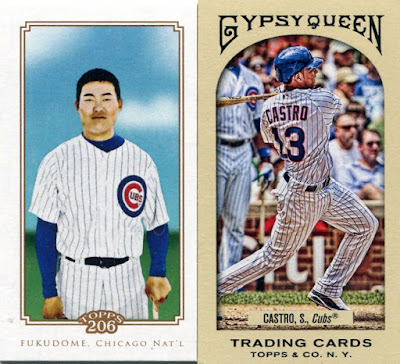 Cubs minis are always good for a little excitement. 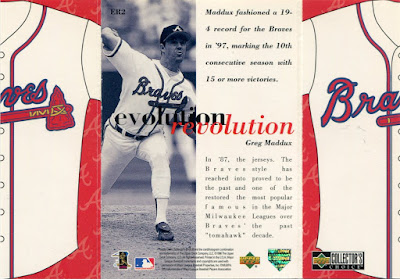 Here's one that registered high on the fun-and-interesting-o-meter: an odd foldout Collector's Choice insert I'd never seen before.

Unfolded, cards from this "Evolution Revolution" series look like nothing more than a drawing of a jersey. Folding them out, however, reveals a player hidden beneath the surface: in this case, Greg Maddux. They just don't make inserts like this anymore.

Score another point for Collector's Choice. 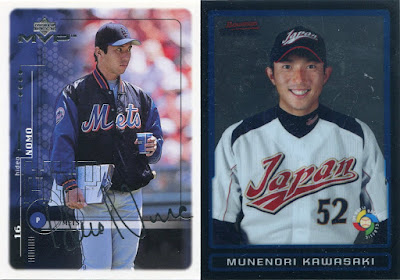 I've never set out to specifically collect Japanese players, but the fact of the matter is that I do chase cards of quite a few of them.

Notably Hideo Nomo -- seen here during his often forgotten Mets days -- and the prankster himself, Munenori Kawasaki -- seen here suiting up for Team Japan in the 2009 World Baseball Classic, years before he'd grace MLB with his presence. 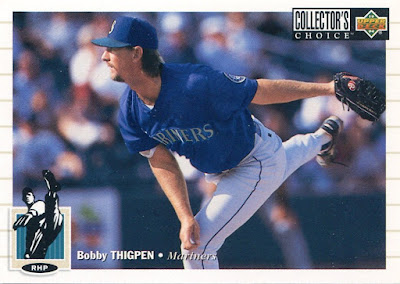 Shane closed things out with a cherry on top: a Dime Box Dozen need.

As far as I know, this is the only card of former White Sox bullpen ace Bobby Thigpen as a Seattle Mariner, a team which he spent all of seven games with at the tail end of his career. I'd had the Silver Signature parallel of this one in my binders for a couple years without ever having found the standard base version, and I probably don't have to tell you how frustrating that is.

Thankfully, Shane put an end to that anguish by putting Mr. Thigpen in my collection.

Fun and interesting are just a couple of the words I'd use to describe the cards I love to chase, but they seem to get the message across to the new trading partners I've made during the lifespan of this blog.

Seeing the cards that speak to others is a large part of what makes trading such a consistent thrill for me.
Posted by Nick at 6:27 PM

Awesome package there! That Spring parallel is just fantastic. Shane is a stand-up guy!

Kershaw and Koufax are my faves here...it's Dodgers day!

Glad I could fill a number of your wants. I haven't posted much lately but have been busy buying cool Sox vintage pieces. Check out myTwitter feed @ShaneKatz73
Thank you again for the kind words Nick--We'll have to trade again!

The O-Pee-Chee Walker is fantastic! I don't do TTM (yet), but if I ever start, I'll probably send out that card.