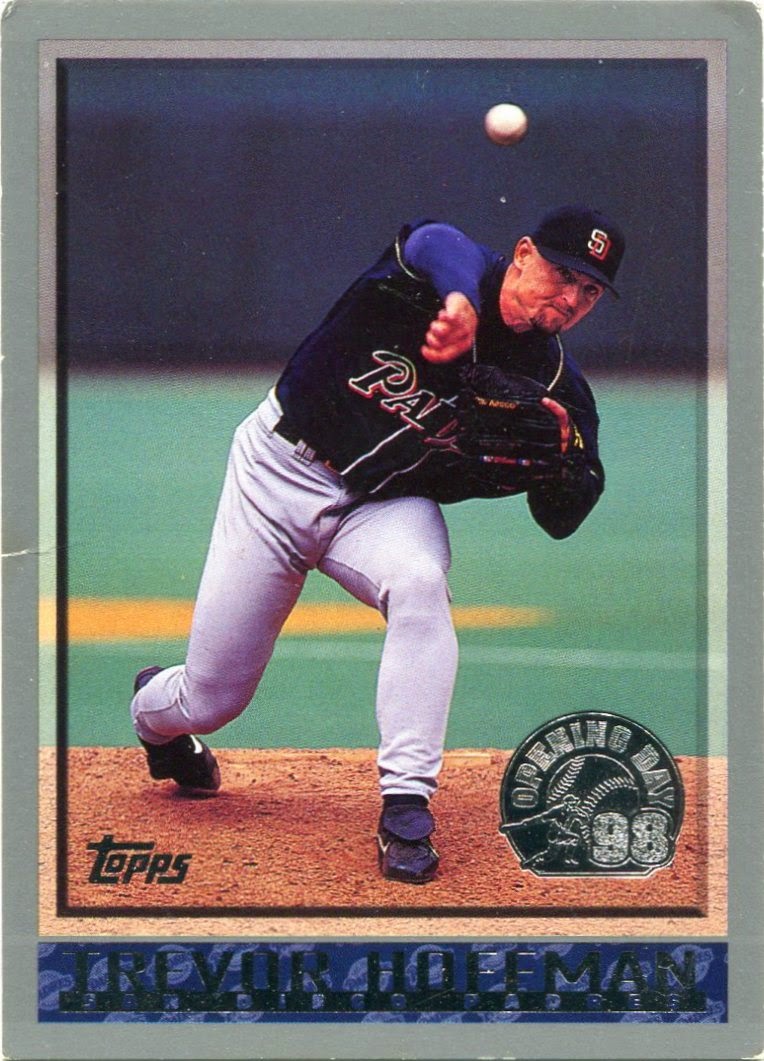 I don't know if there has ever been a more disappointing brand than Opening Day.

The idea is certainly noble. With Flagship coming out earlier and earlier every year (usually around late January or early February), it's good to have a set hitting the shelves right around, well...Opening Day.

In the end, the execution just isn't there. I'd say about 95 percent of the cards in Opening Day's wide catalog are purely stunt doubles of their Flagship big brothers.

I've said this before, but I see a lot of potential in Opening Day. At around a dollar per pack, it's still the cheapest licensed brand around. I always pick up a few packs of the stuff every year for the budget-friendly price tag alone. Still, the fact that it's merely one big set of doubles keeps me from getting too excited.

By now, I've come to terms with the fact that Opening Day will probably never capitalize on its potential. 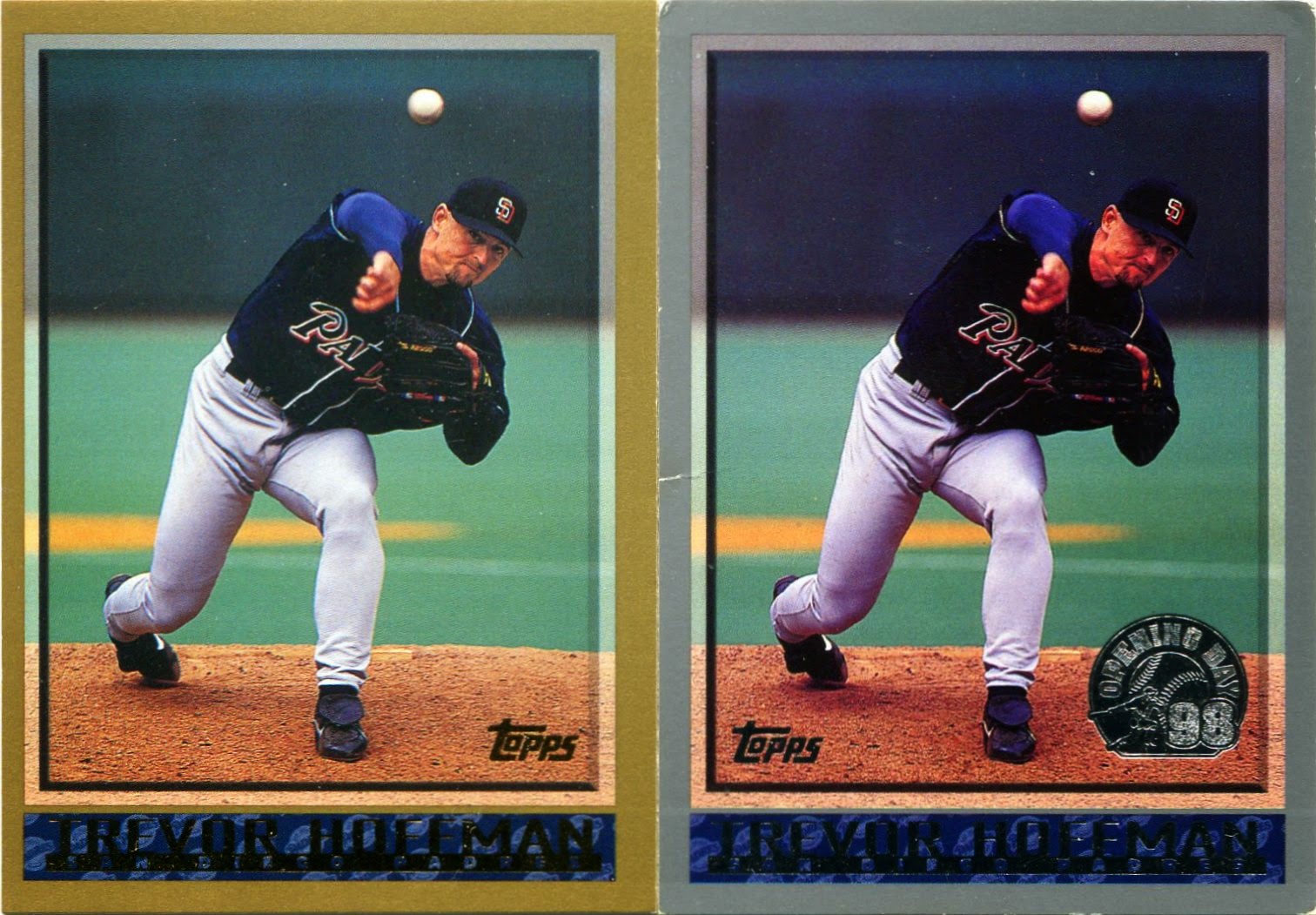 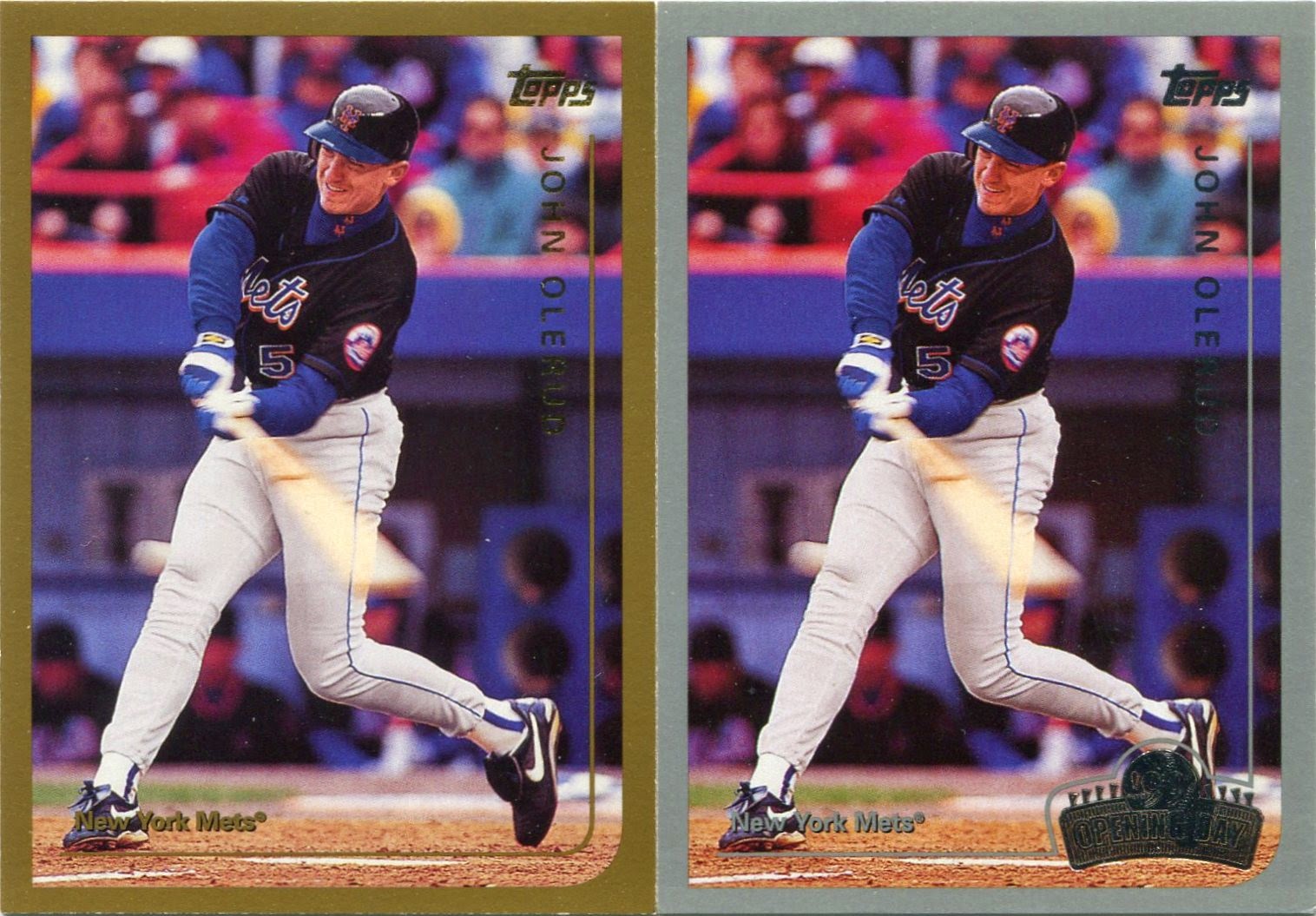 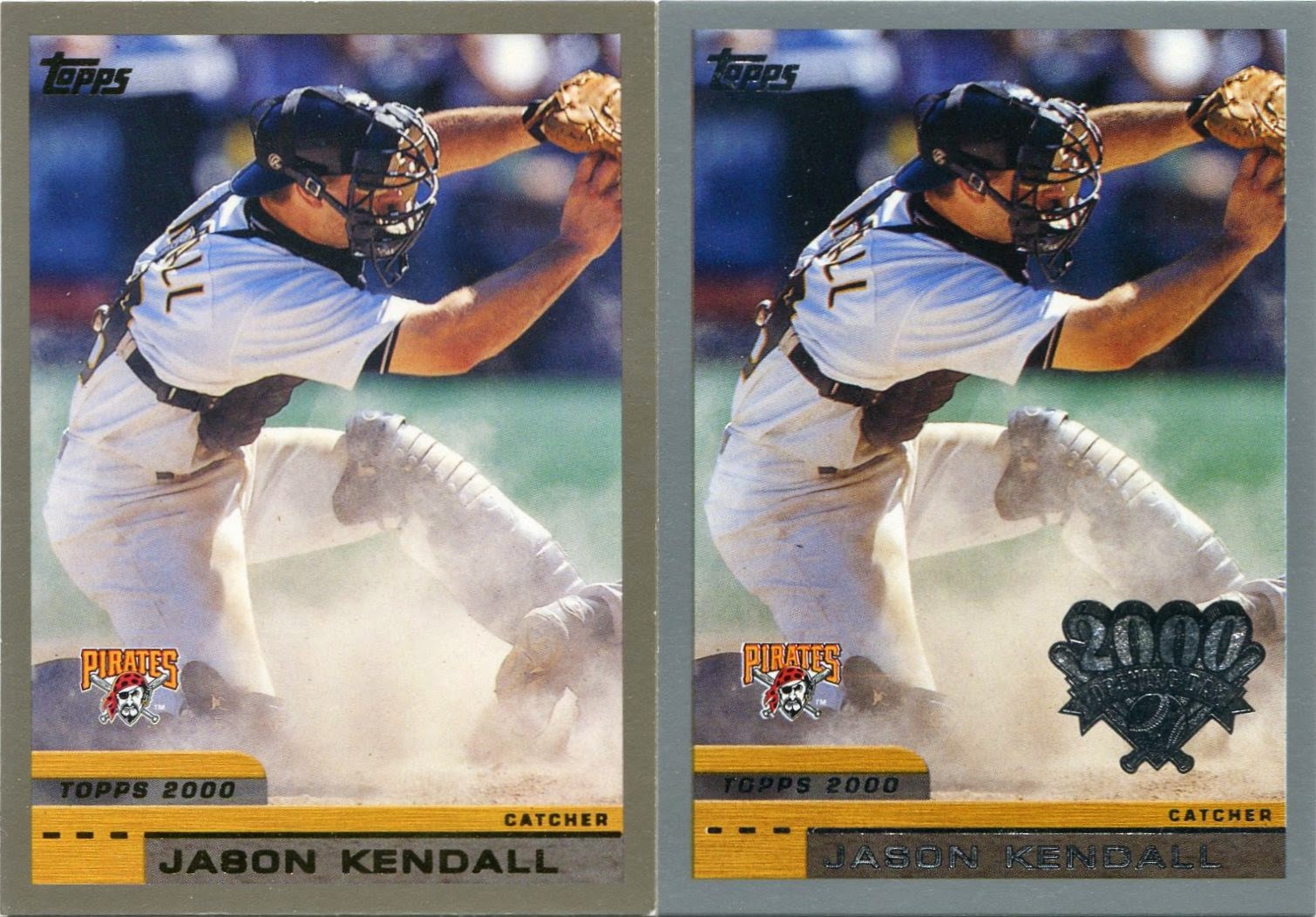 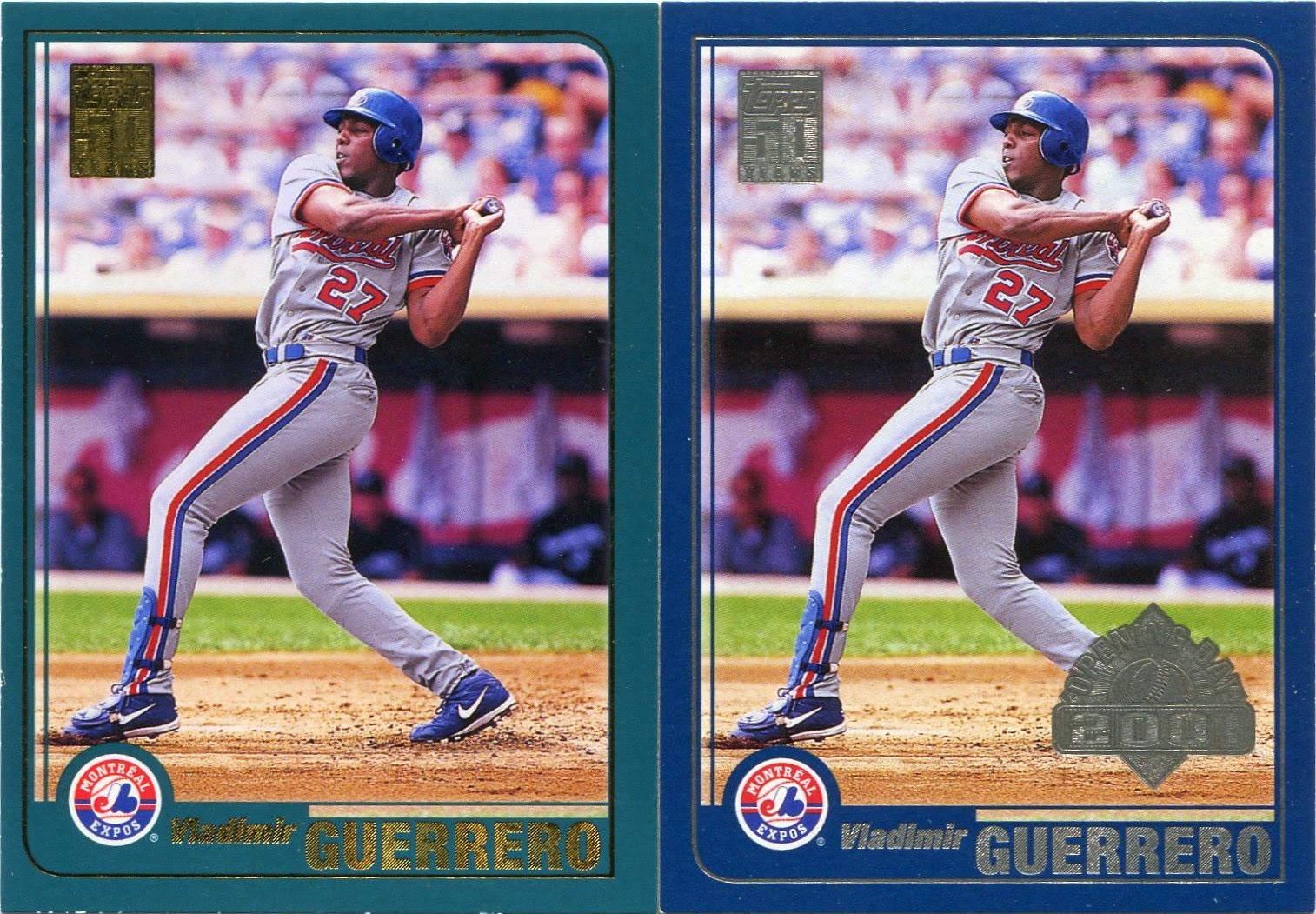 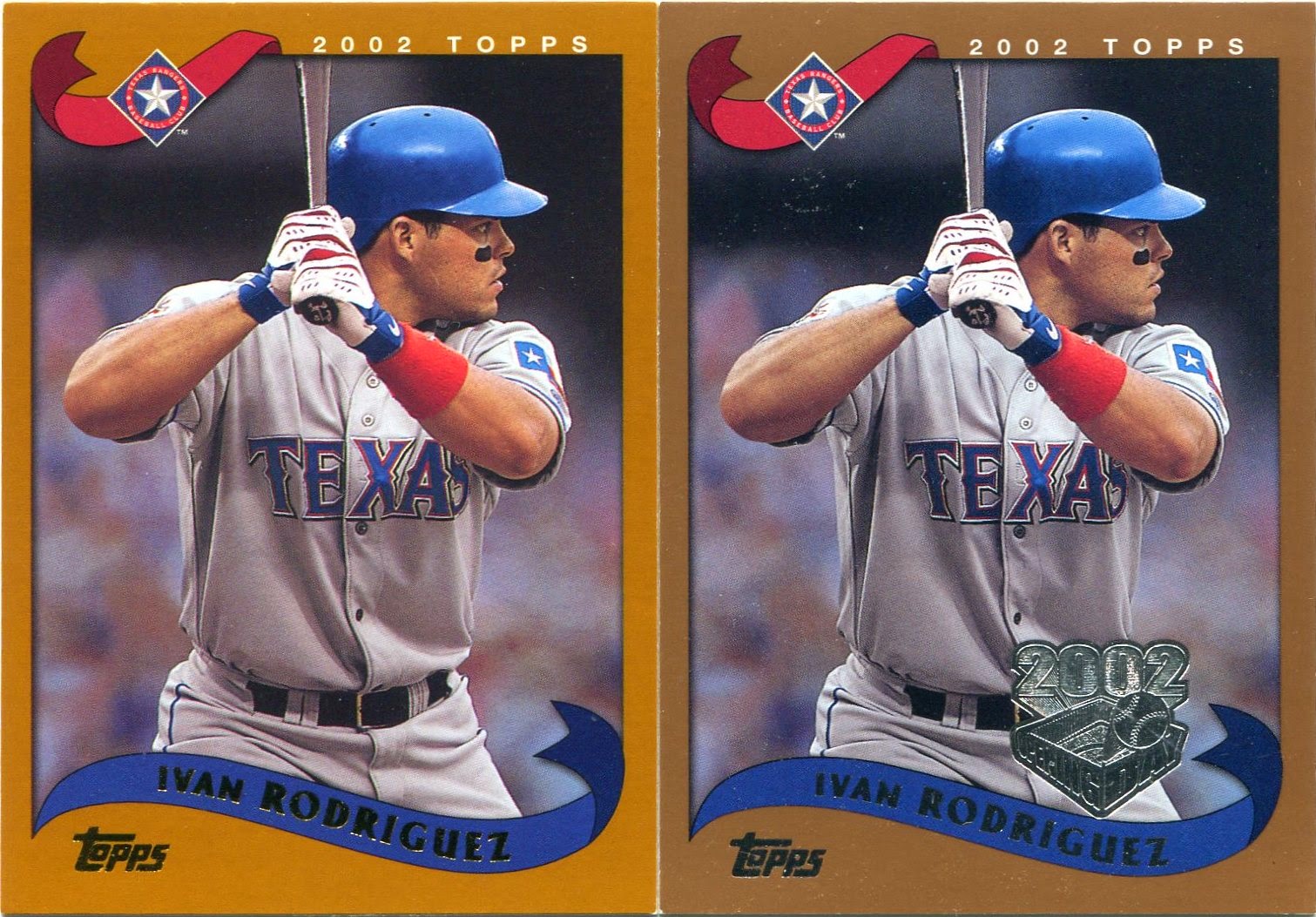 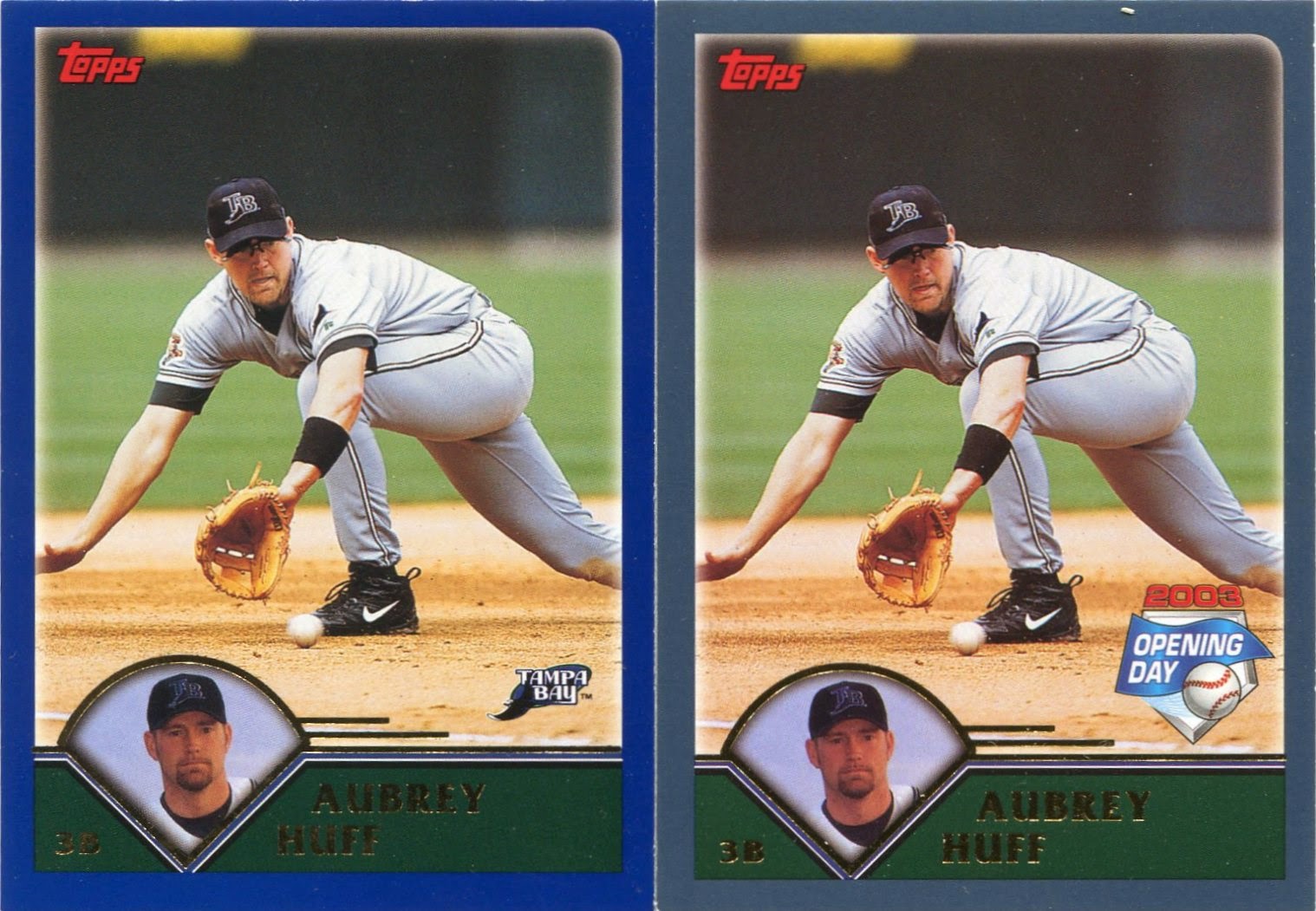 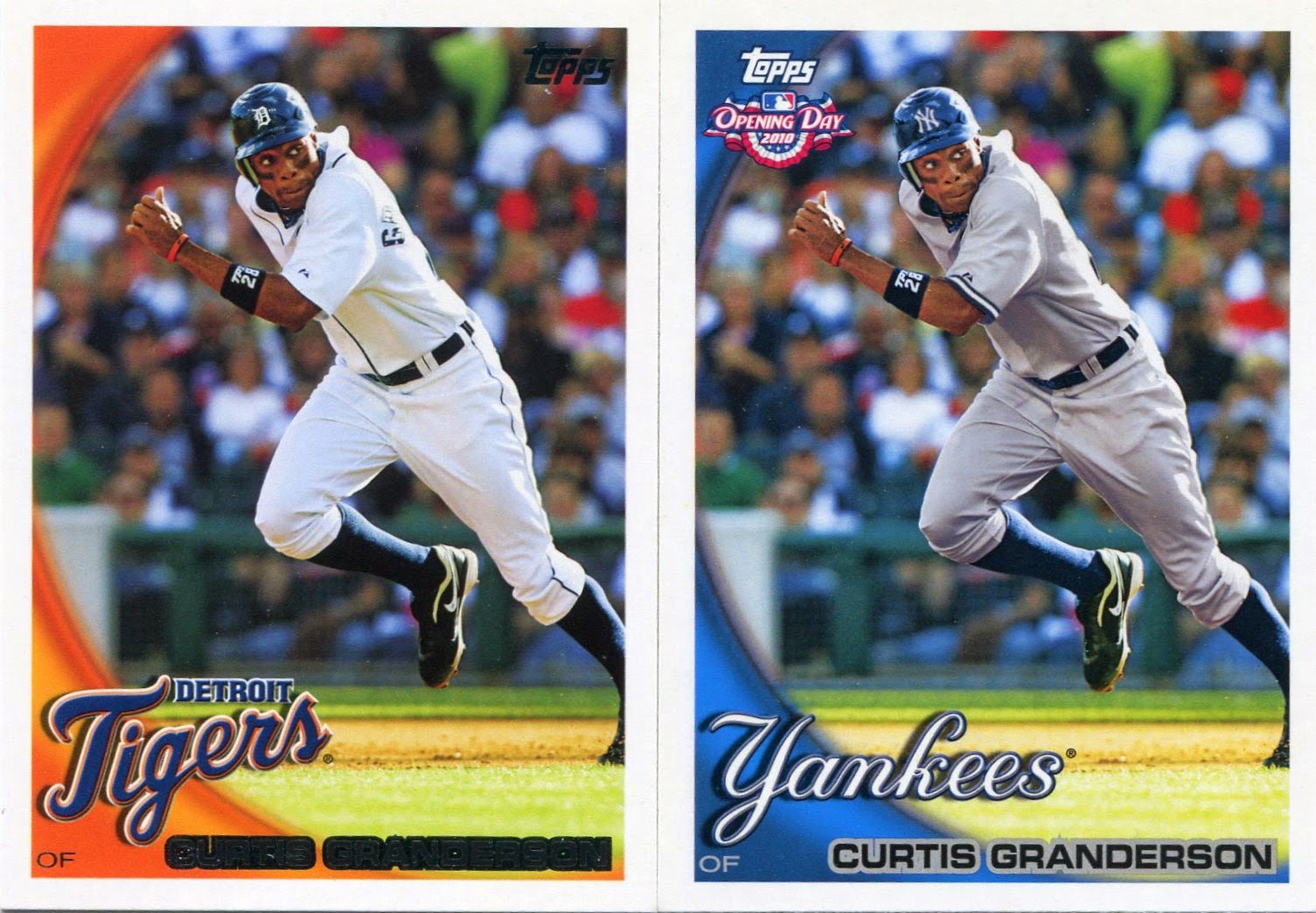 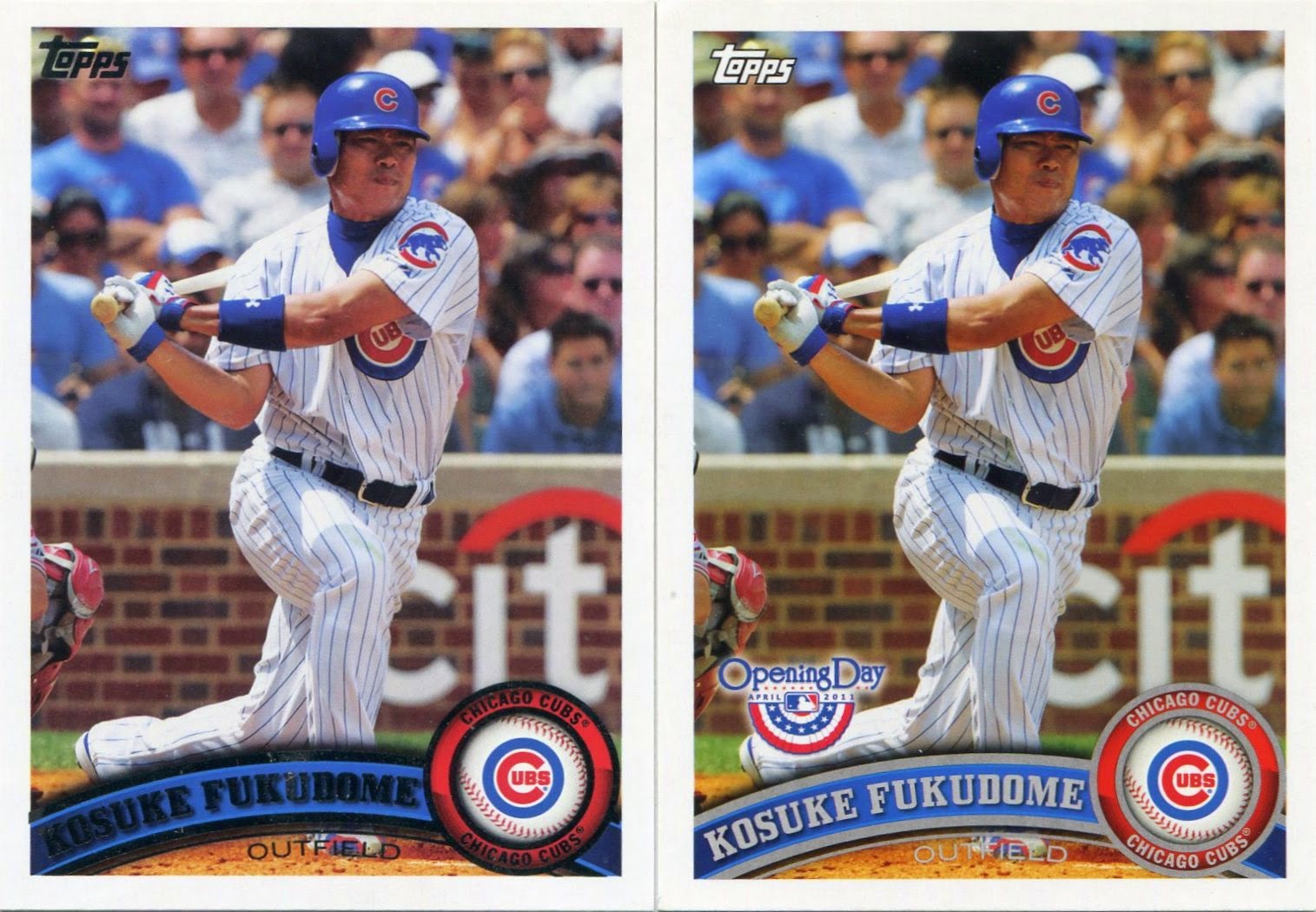 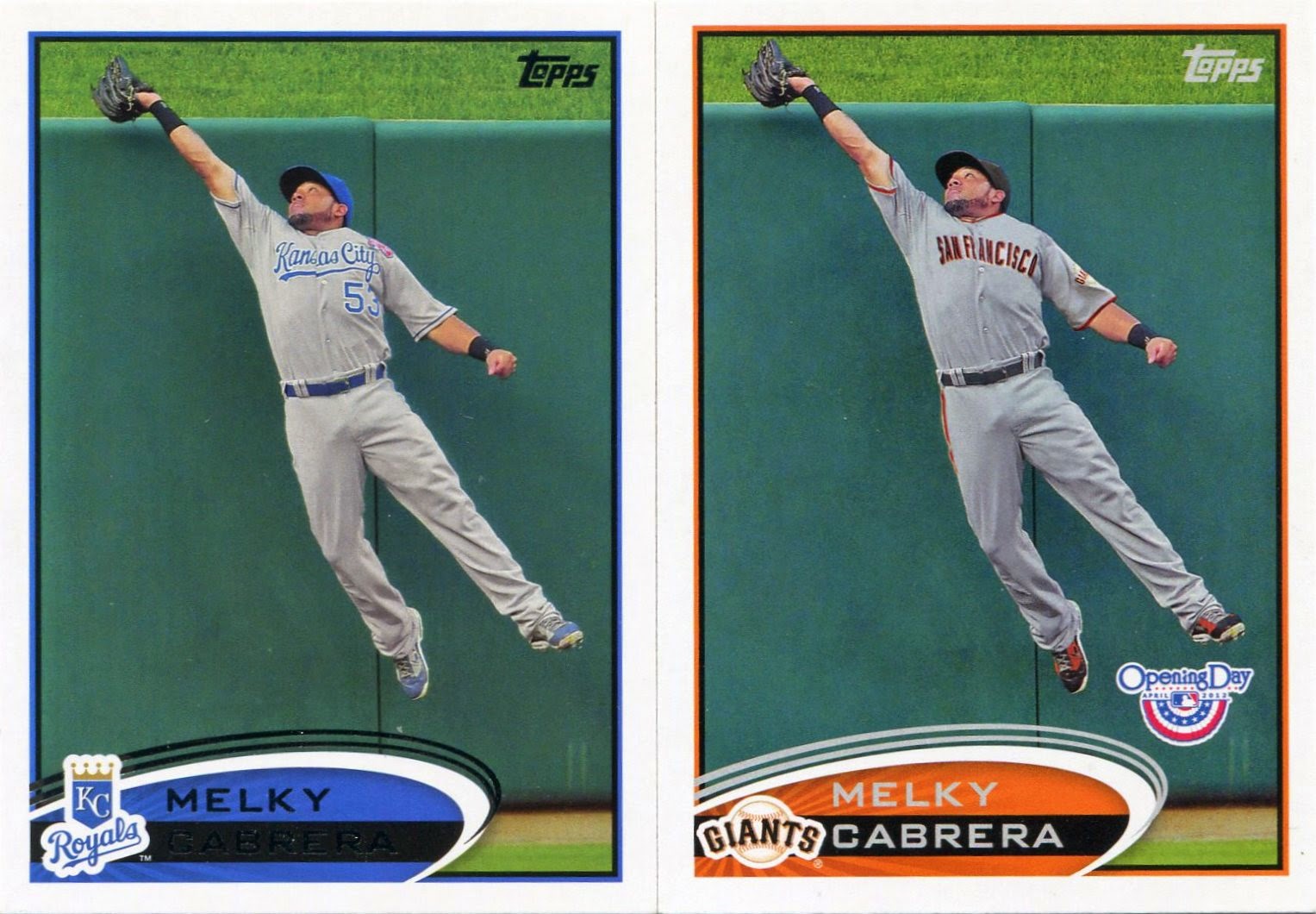 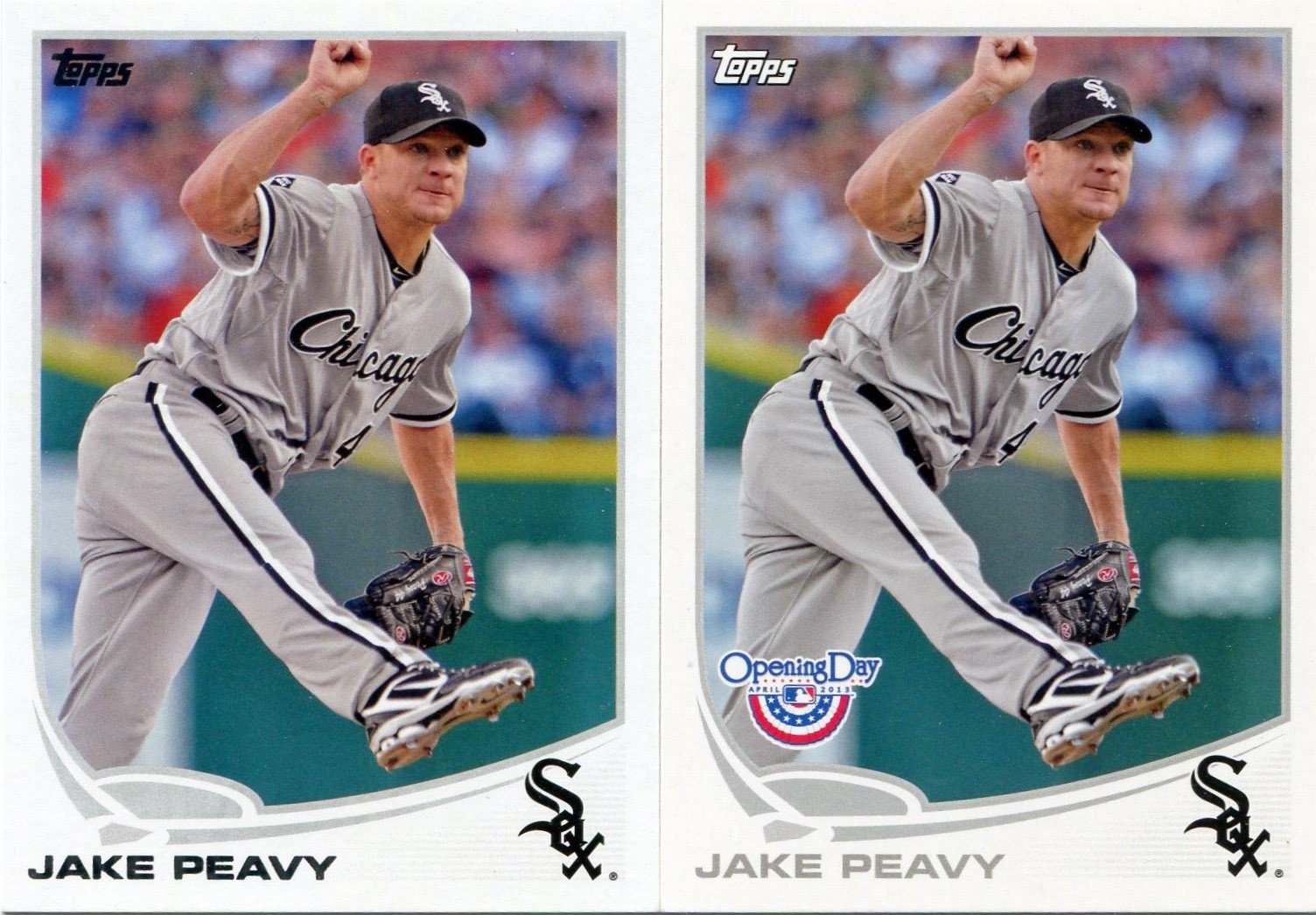 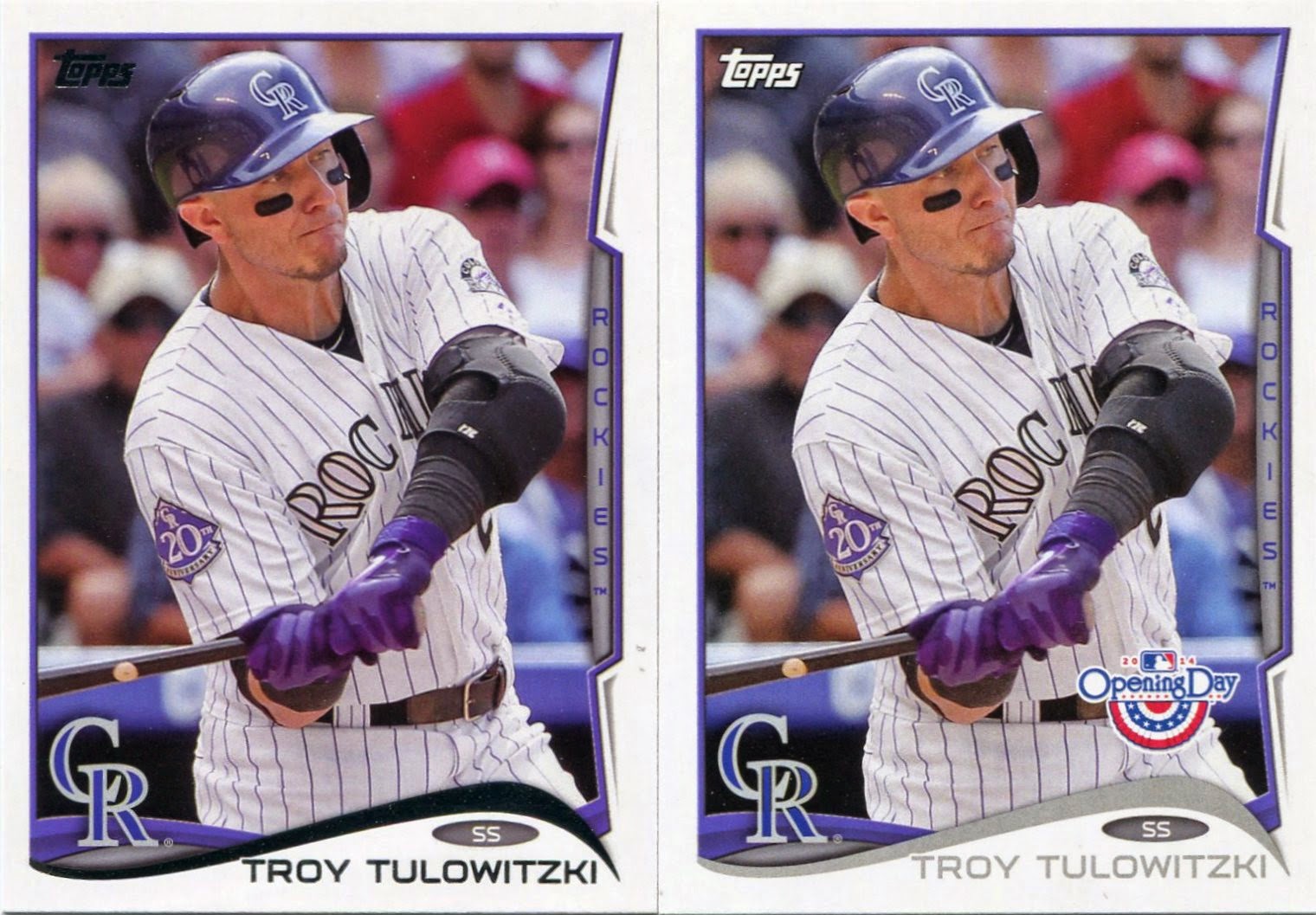 After all, the vast majority of Opening Day's designs are nearly indistinguishable from Flagship.

Opening Day has been on the shelves every year since 1998 (except 2009, for some reason), but it's had to play second fiddle since the beginning.

Topps seemed to at least try in the brand's early days. The silver borders from 1998 to 2000 are different, although I'm not sure they gave the set much of an identity. At least Topps varied the Opening Day logos.

From 2001 to 2003, Topps went way more low-key in adjusting the borders. The difference isn't as easy to see in-person as my scanner would have you believe. Still basically the same card.

Topps has pretty much said "screw it" with Opening Day in recent years. Aside from a little airbrushing here and there and the lack of foil, it features the exact same cards as Flagship, only in a much smaller checklist.

This year will mark the 15th different set in the history of Opening Day, and it still hasn't really gone anywhere. 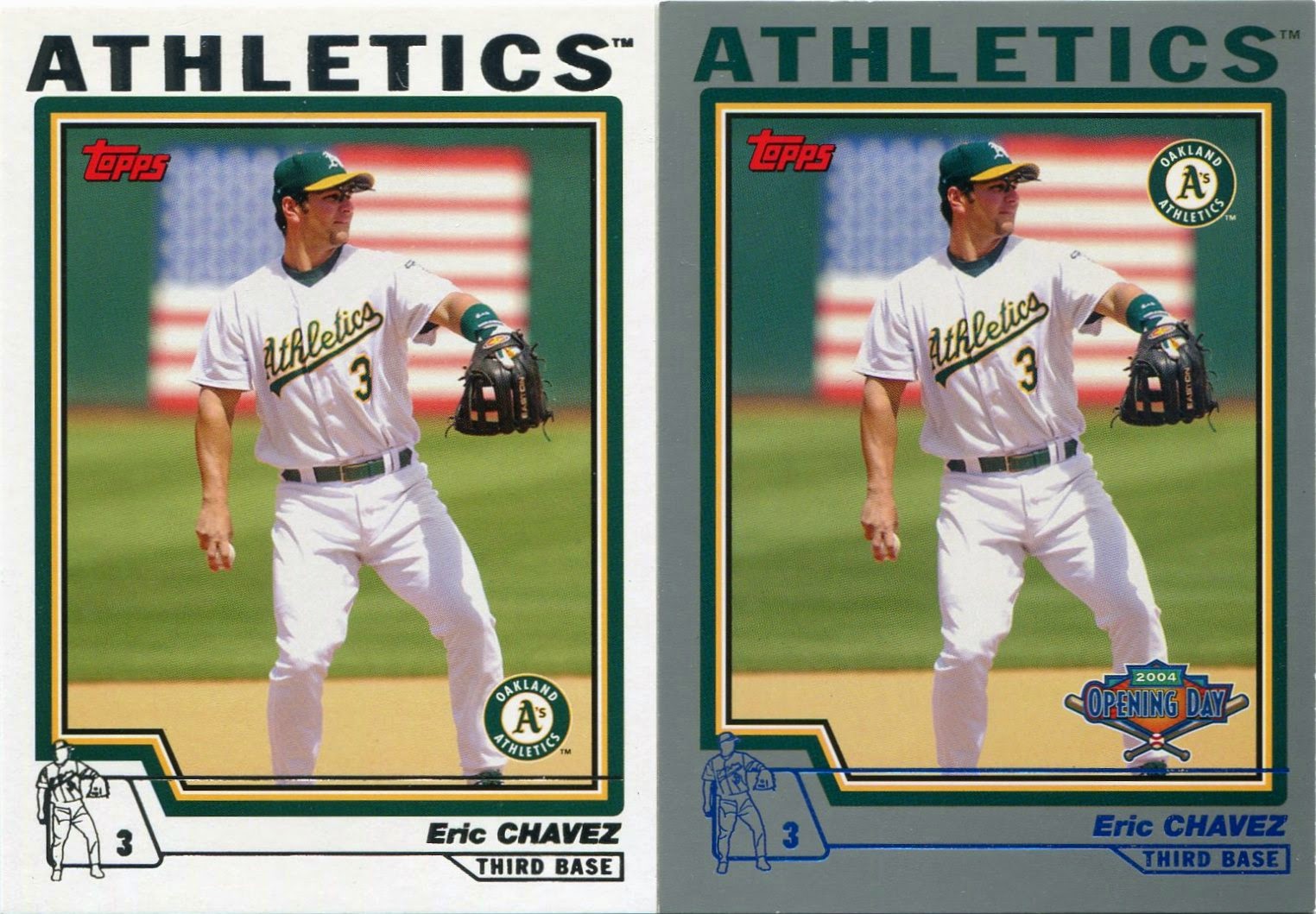 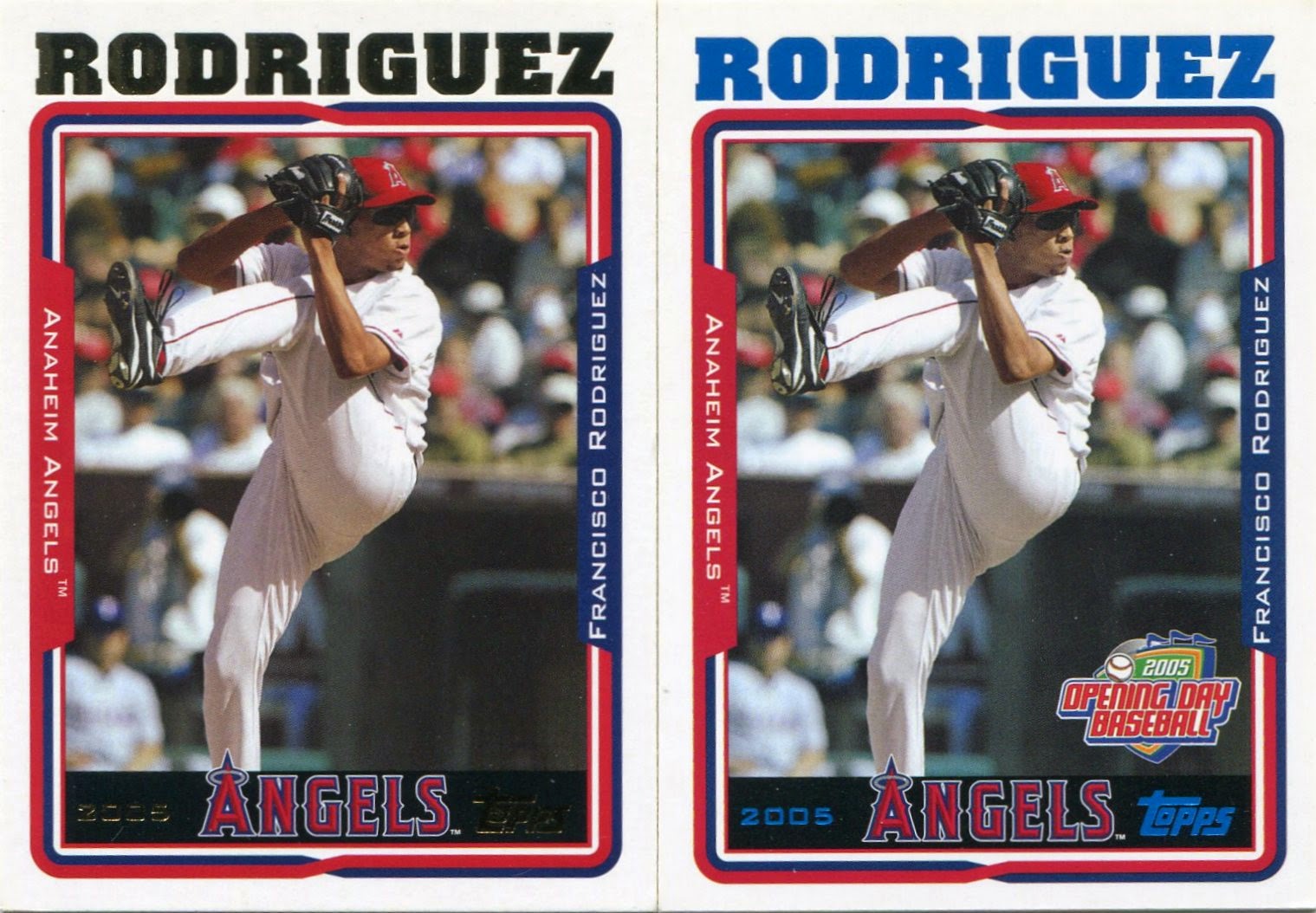 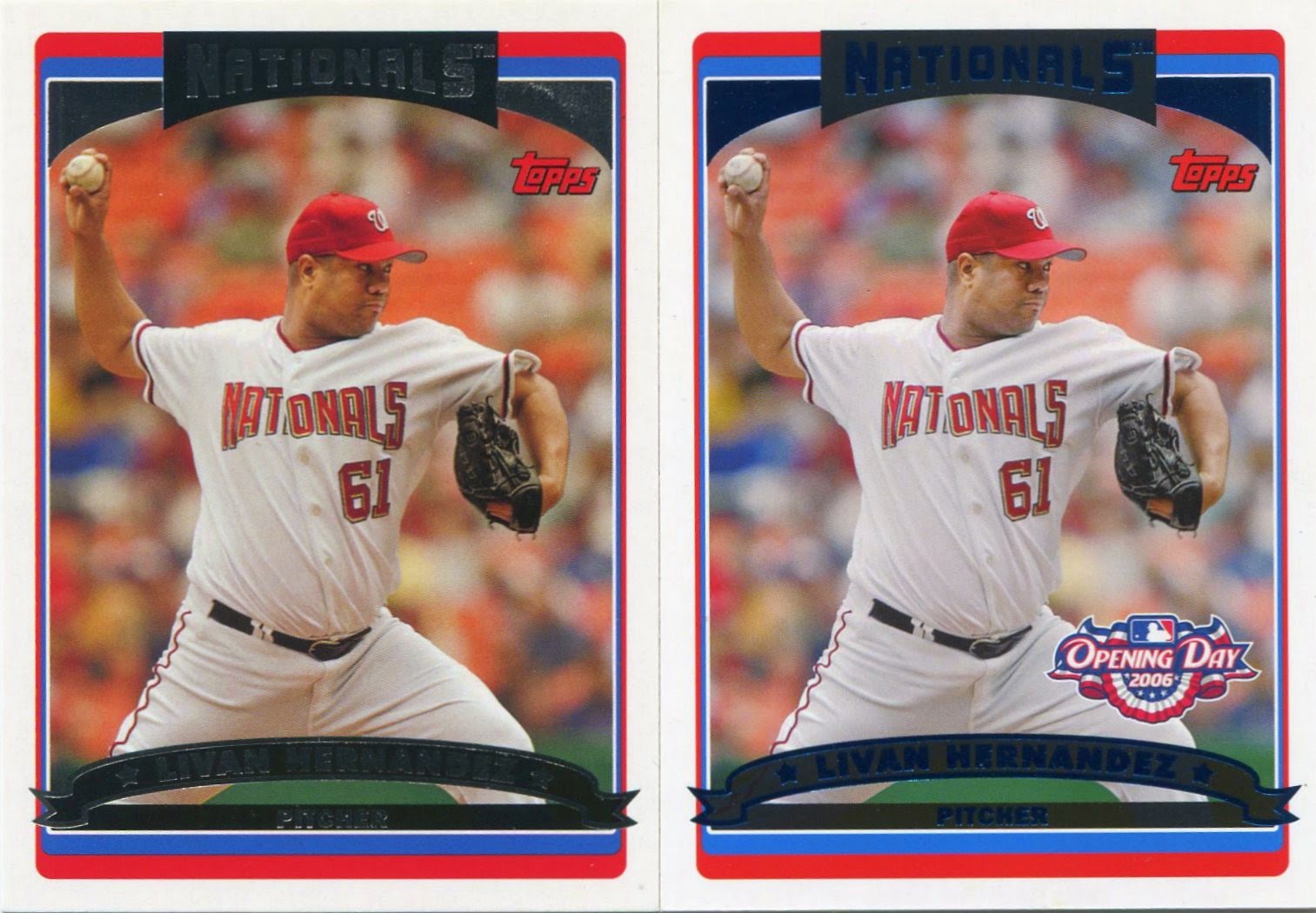 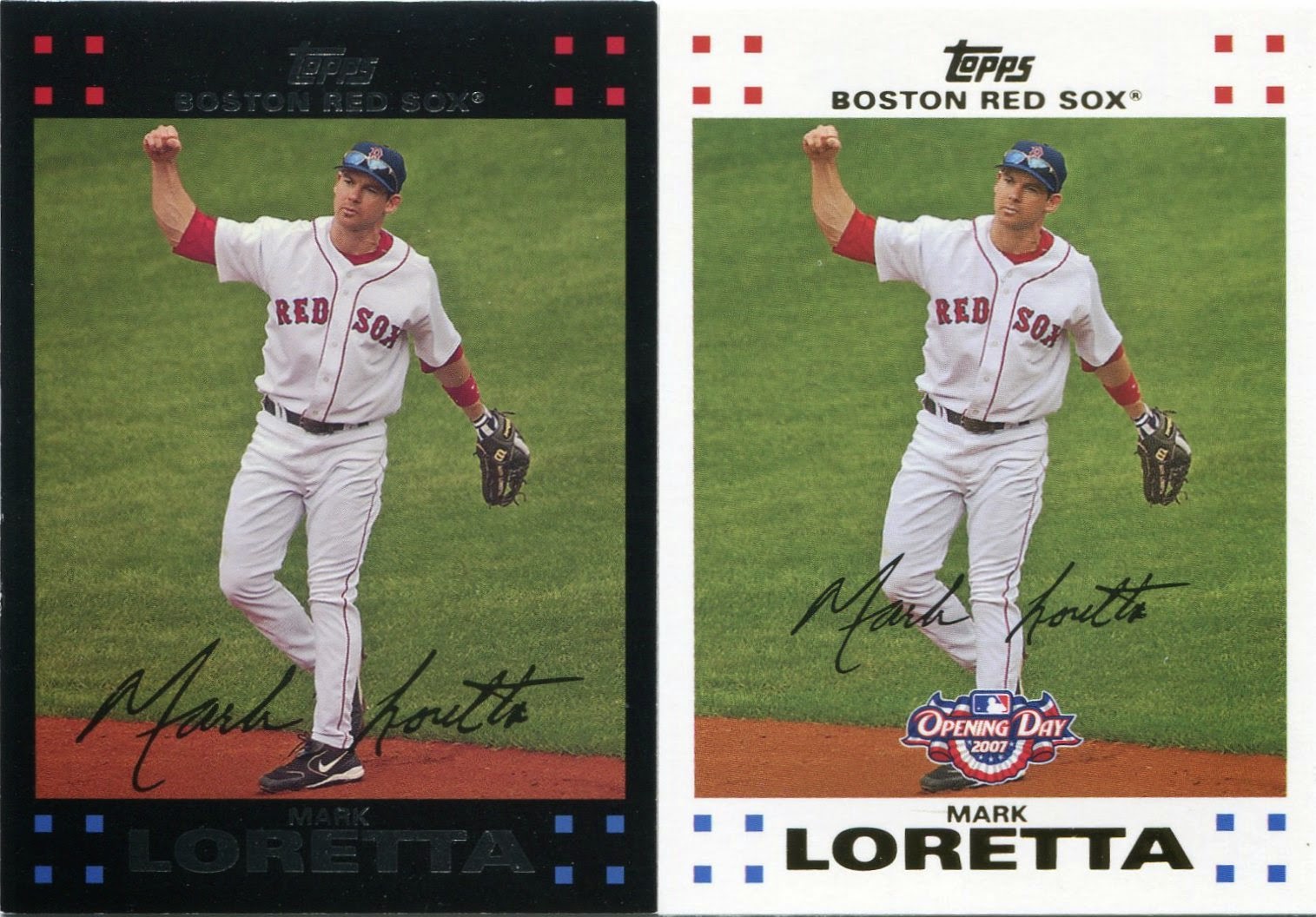 Of course, there are a few exceptions.

The actual design itself has only caught my eye a few times in Opening Day's history. Rather than simply regurgitating what Flagship has to offer, these sets come close to giving Opening Day an individual identity.

I'm not sure any of them improve on the Flagship design, but at least they're different. That's all I ask.

The gray borders left something to be desired in 2004, but there was no mistaking Flagship and Opening Day that year. Blue was nicely weaved into both the 2005 and 2006 designs. (It may be tough to tell from the scan, but the 2006 edition utilizes blue foil.)

And, if anything, 2007 Opening Day showed me that the border color really didn't matter that year.

I hated the design either way. 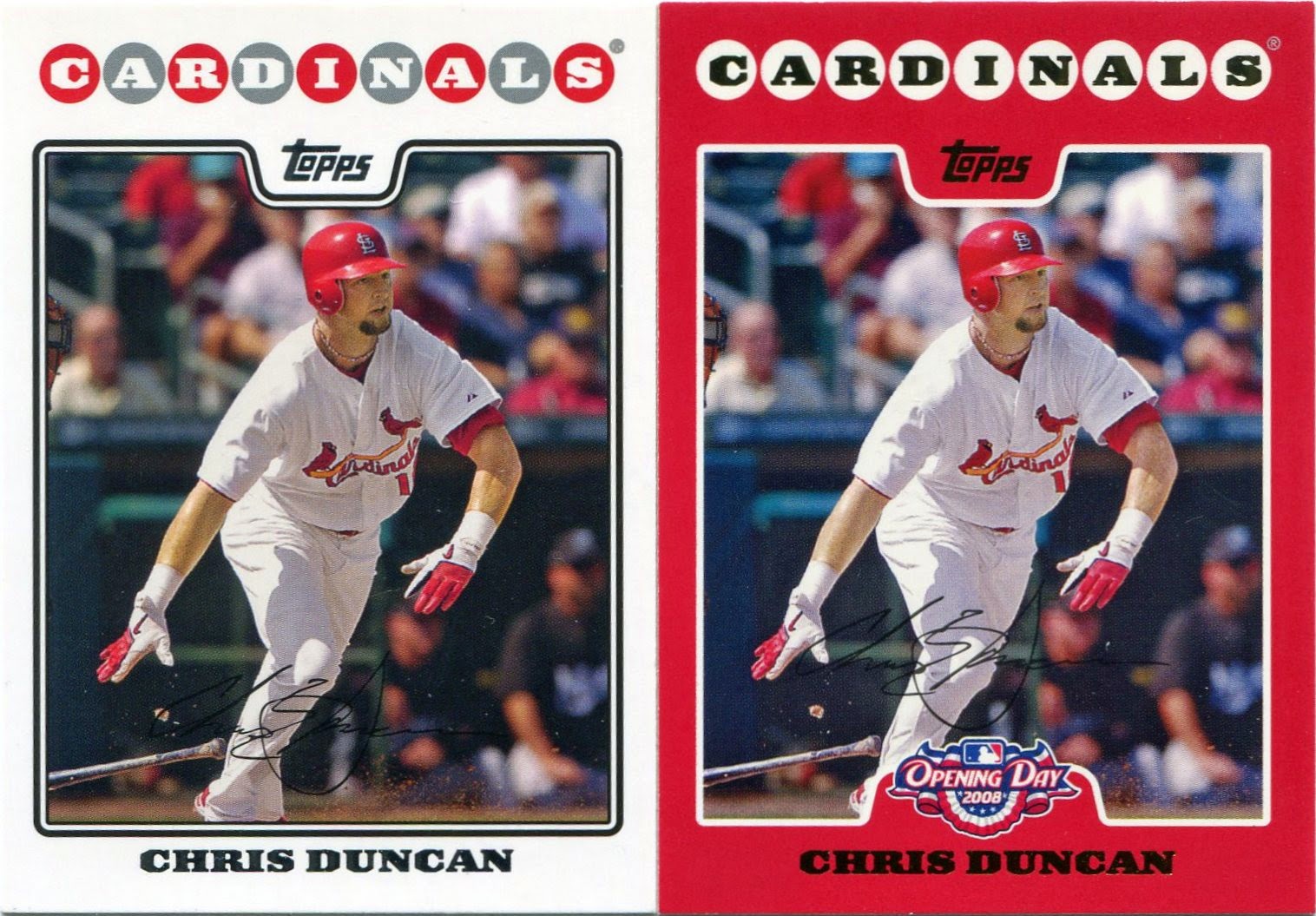 The only year I can honestly say that Opening Day was better than Flagship was in 2008.

Those tomato red borders made sure of that. If Opening Day isn't going to change its pictures, the least it could do is experiment with the borders. And I'm not talking the gray or dark green from the brand's early days.

I'm talking colors that pop. Red pops. Brown doesn't. Plus, brown doesn't match up with any current ball clubs. (At least not until the Padres revert to their old throwbacks.)

The red borders are even more striking when paired up with teams with red color schemes, such as the Cardinals. 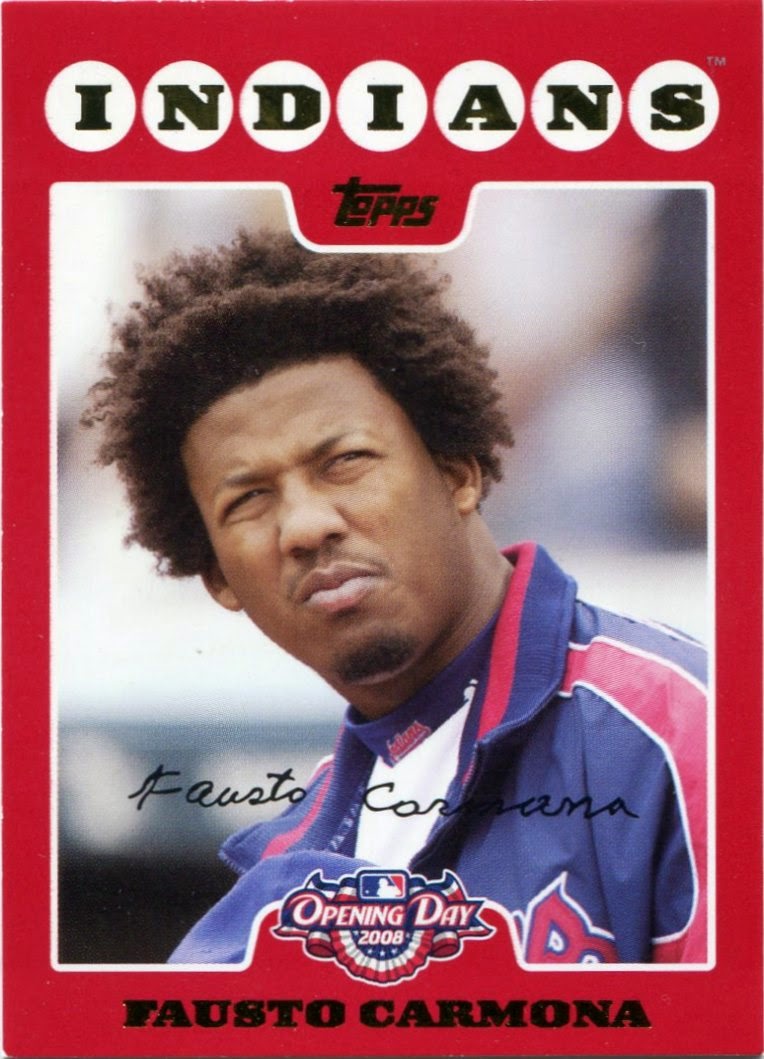 If nothing else, 2008 gave us what is still the best Opening Day specimen ever printed.

Will Opening Day ever capitalize on its potential? Probably not. Still, no matter how fleeting it may be, I have a glimmer of hope for Opening Day every time I look at this card.

That's Fausto Carmona? I thought that was Roberto Hernandez... ;).

When I first got into the hobby in 2011 I thought Opening Day was just one of the many base parallels. Four years later I still think that it is, but realize it's relatively cheaper.

I know it's been said over a trillion times already but if Opening Day offered different pictures from the flagship set (something like the pictures SEGA used to use for SEGA card gen cards) I have a feeling it'd be a lot better. At least it's got some decent inserts from time to time.

There is a complete lack of foil. How great are those foil-less releases the past few years over the flagship offerings???

I agree - different images on Opening Day and Topps would have a winner.

Opening Day won't get my dollars. It's hard enough to fork over money for Topps base. While I have to agree on the red borders, looking at the squinting Fausto gives me a slight headache.

I love the 2008 Opening Day set also. As a Red Sox fan it's a particularly appropriate border color.

I used to buy Opening Day because it was cheap & I thought the inserts were fun. I quit when I finally realized I could be doing better things with those dollars. (I'm waiting on a JustCommons purchase to finally finish my mascots insert set from 2011.)

I do think Opening Day was an improvement on the Topps base set in 2007, but I approve of all the years Topps made an effort to make the cards look different.

For the first 10 or so years, I completely ignored Opening Day.

For the past 5 years or so, I'll buy a couple of packs and hope I get a fun insert, and then I'll semi-passively accumulate the Mascots and guys who were photoshopped into new uniforms.

Speaking of photoshopping, I smiled when I saw the 2010 Curtis Granderson changed from a home Tigers uni to a road Yankees uniform. I can speak from experience that pinstripes are anathema to someone trying to digitally alter a uniform. :-)

I don't really like Opening Day, but I always end up with a ton of it. My local Target goes through stretches where OD is the only thing on the shelves. I can't help myself from buying some.

I've never bought anything from Opening Day, but they're nice to get in trades.

And the lack of foil is refreshing.

The base set might just be a foil-free duplicate, but I think the Opening Day inserts are stellar!