Coming to my senses 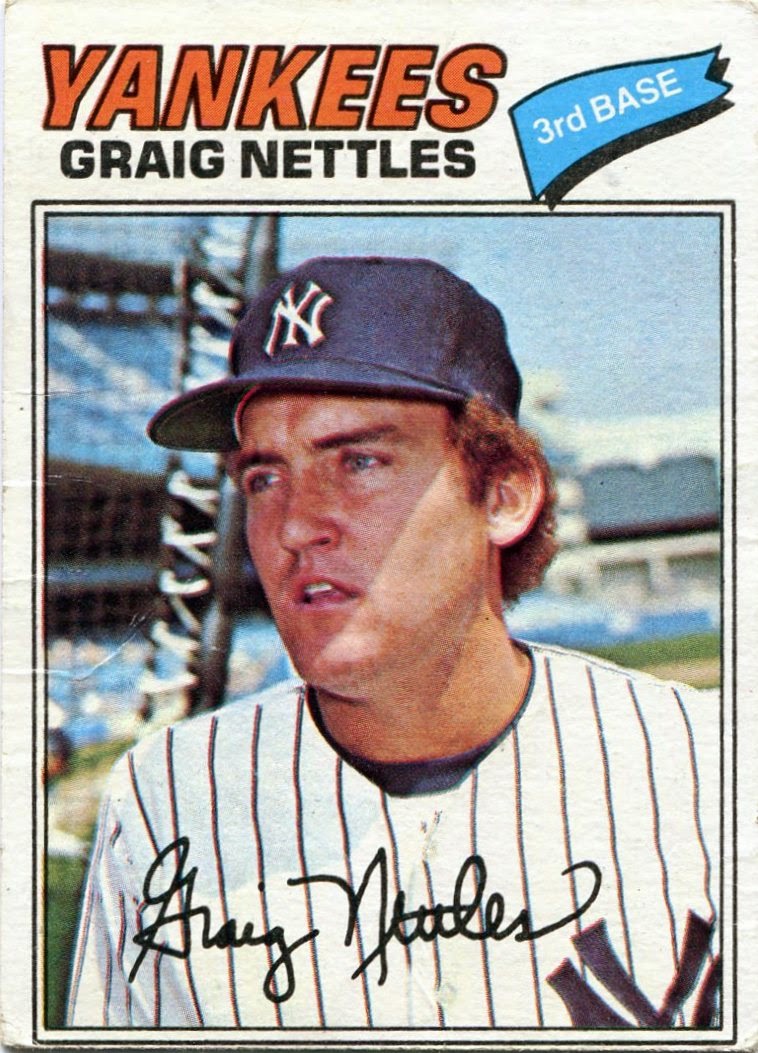 It's easy to miss, but we really do use our senses quite a bit in the everyday world of card collecting.

On Friday, I posted a trade package from my buddy Tim of the great new blog "I Love the Smell of Cardboard in the Morning." Apparently, Tim wasn't satisfied, because I received a second stack of gems from him a week or two ago.

I personally love the name of Tim's blog because of the sheer humor of it, but I'll be the first to admit that I do actually smell my cards from time to time. Am I crazy or just a dedicated card collector? (Probably a little of both.)

Vintage, as you probably know, has a smell unlike any other type of baseball card. It's hard to put into words, but they have kind of a musty scent. Almost all of my vintage cards smell like an old attic. even though I'm sure a lot of them have never been in an attic before.

Because it was a former Dime Box Dozen need, this Nettles also has the sweet smell of victory attached to it. I've had the OPC version of this card for years, but somehow never managed to track down the standard Topps issue.

It's a good thing Tim was there to sniff it out. 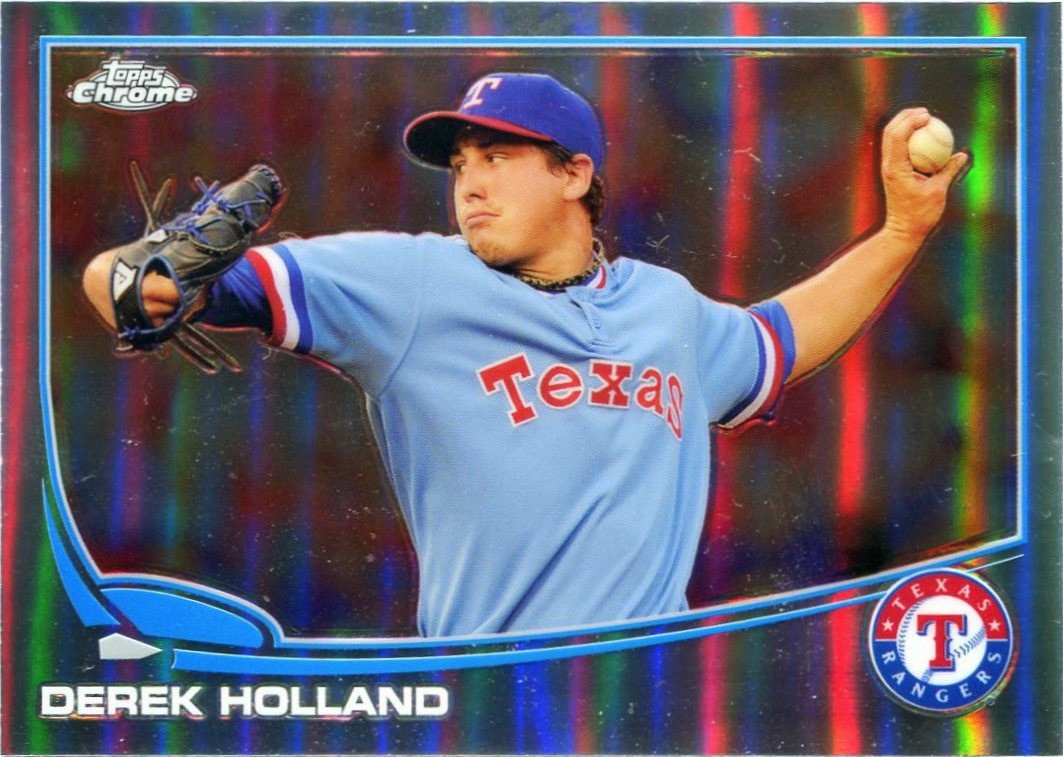 The most common sense attached to baseball cards, of course, is sight.

Some even come in the form of shiny, hypnotizing refractors. Most collectors will tell you that they're impossible to resist.

No matter how old I get, I'll always have a certain OOH, SHINY!!!!!! attachment to these things. 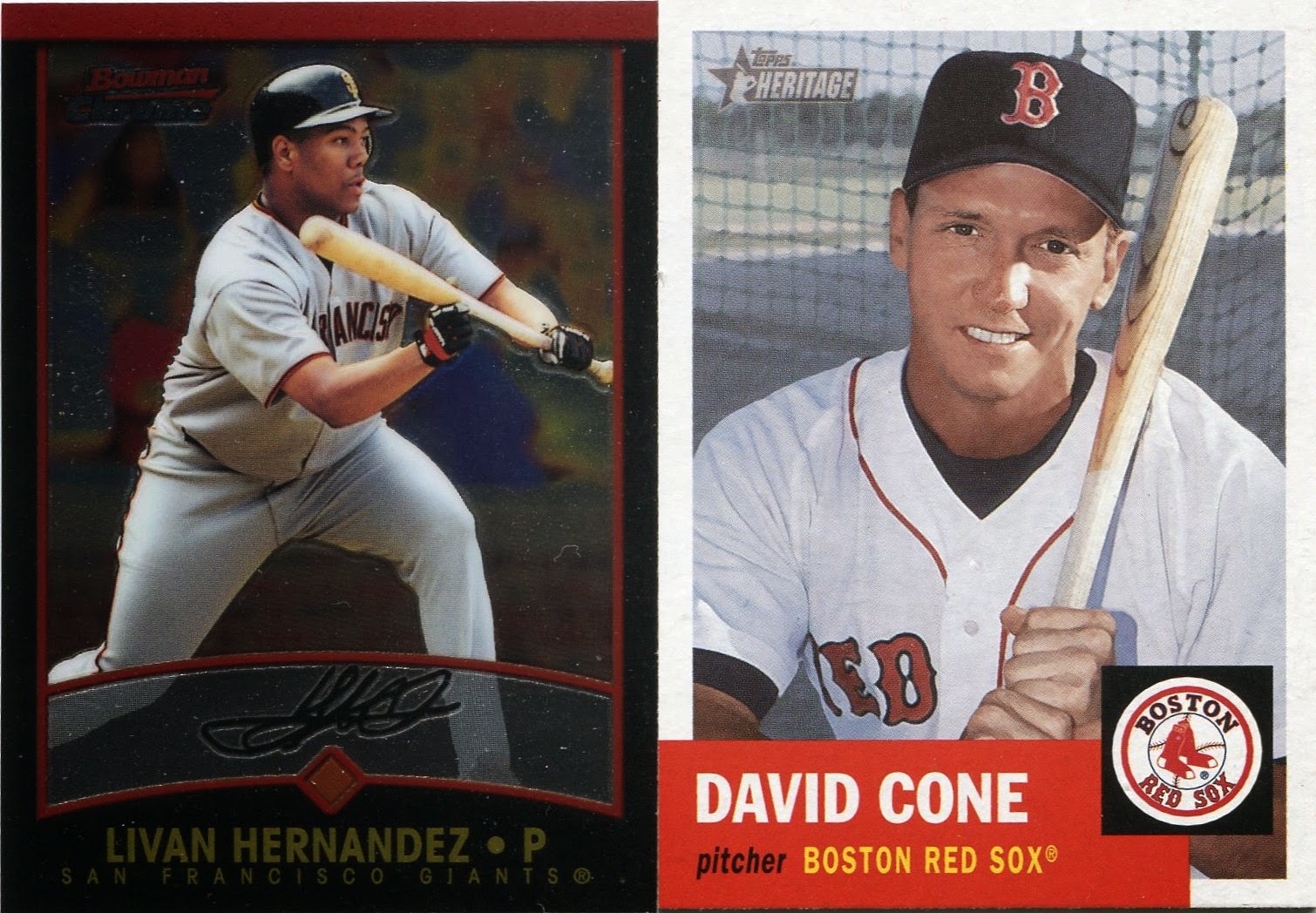 Mini-collections are all about sight.

I spy a throwback on the aforementioned Holland, and pitchers at the plate with these two.

Still, while I'm sure we don't consciously think about it a whole lot, feel is a very important part of the collecting experience.

You can slide your fingers across the Chrome or touch the roughness of Heritage's old-style cardboard. 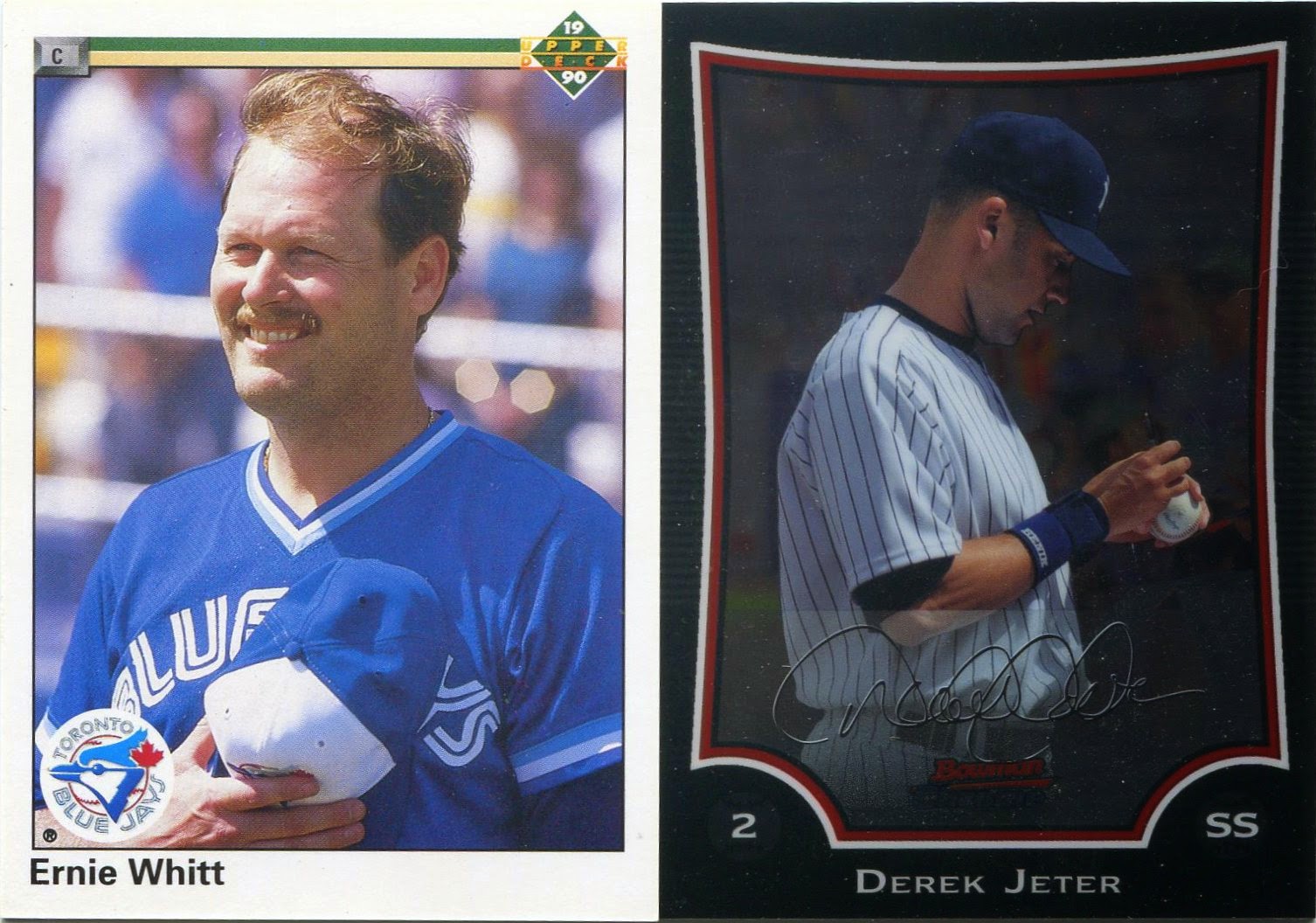 I'm sure the higher-quality card stock in Upper Deck's early years felt strange to a lot of people at the time.

And, maybe it's just me, but recent Chrome cards seem to have a much different feel than older ones. It might just be that cards like the Livan Hernandez (from 2001) have had a little more time to age, which might explain why the surface on this Jeter (2009) is much smoother.

I guess Chrome has to age like everyone else. 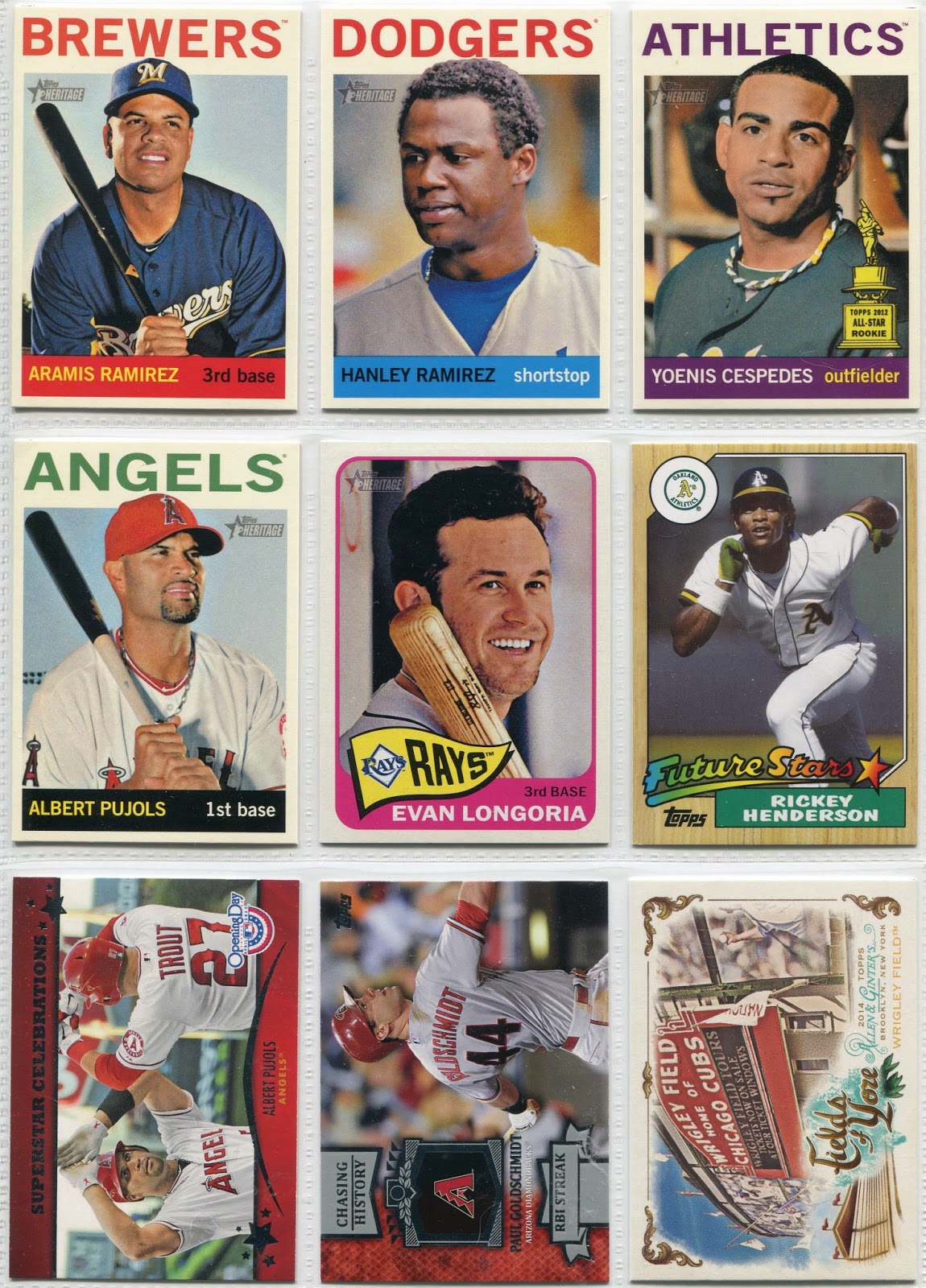 Tim set his sights on some set needs.

You can't tell from simply looking at them, but the five Heritage cards on this page are short-prints.

Topps really needs to make those things easier to identify. 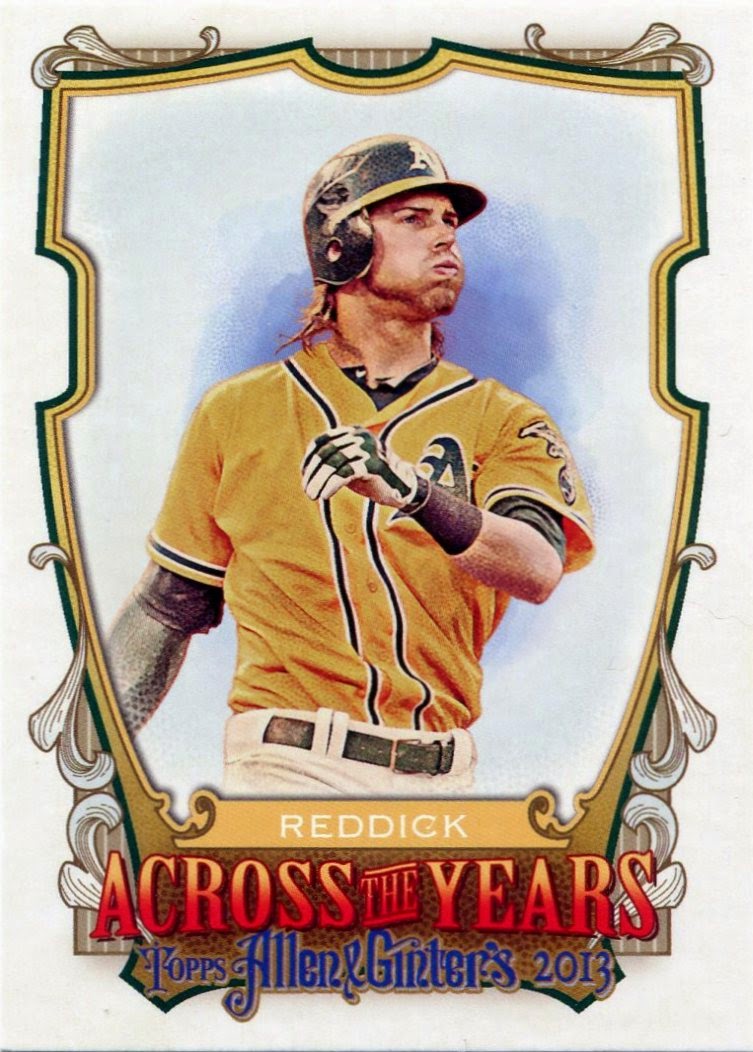 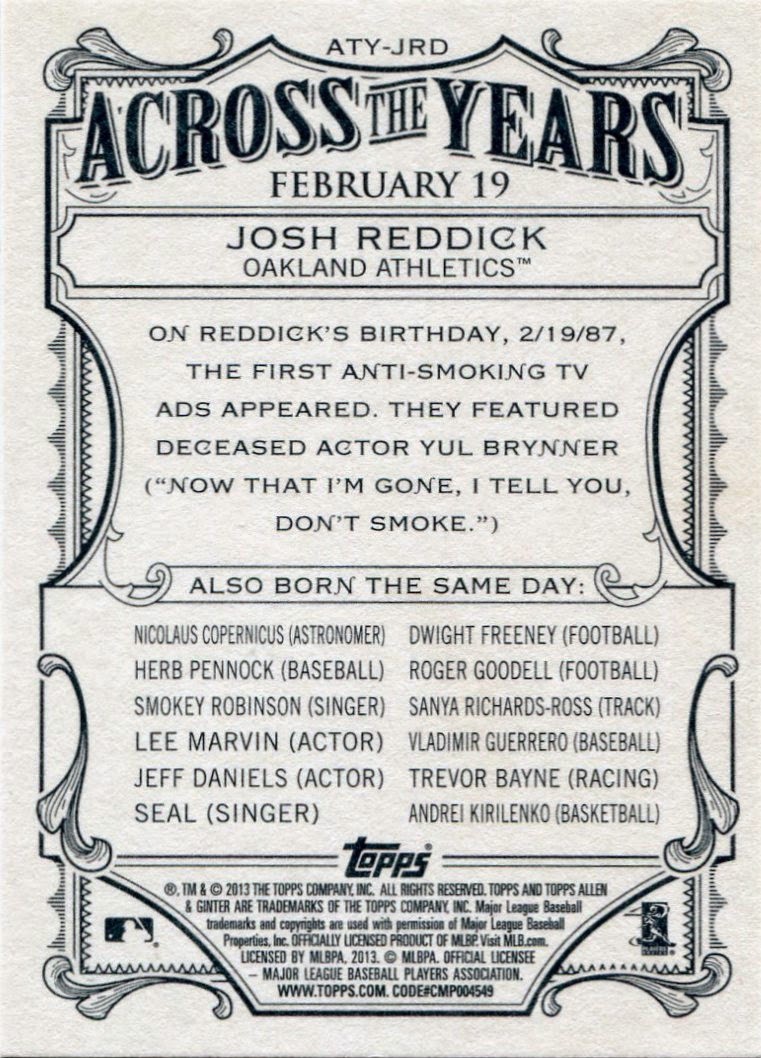 I've talked about A&G's "Across the Years" series many times in the past, but I wanted to give Josh Reddick here a mention.

This particular insert is special to me because Reddick and I share February 19th birthdays. The specific event A&G chose to honor here isn't exactly uplifting, but at least it's relatively historic.

And, while I'm proud to say that I share birthdays with people like Copernicus, Smokey Robinson, and Jeff Daniels, I'm sad to report that Topps did make a mistake. As much as I'd like to say so, Vlad and I do not share a birthday. He was born on February 9th, not the 19th.

You can't sneak one past my eyes, Topps. 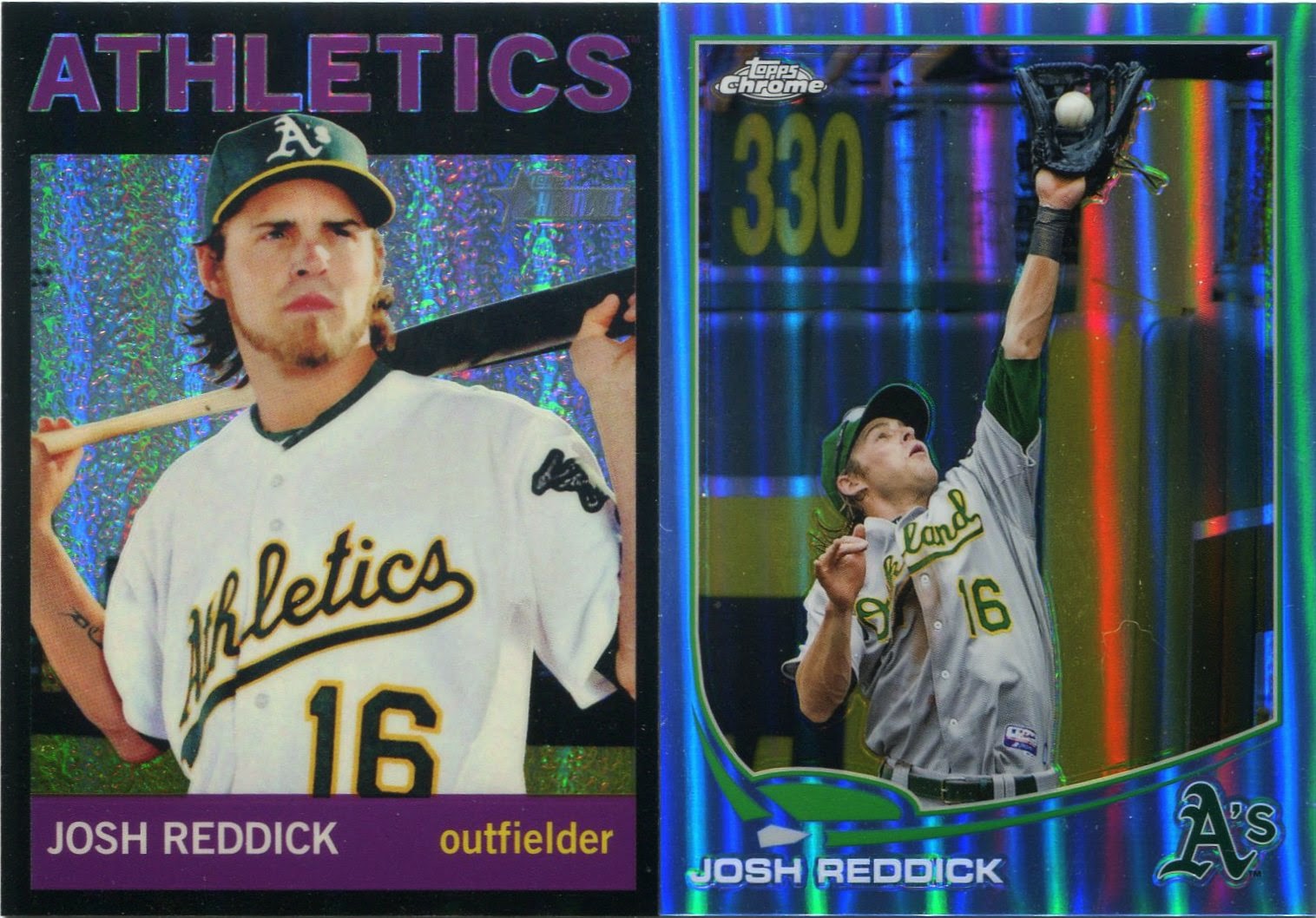 Hearing might be the rarest sense when it comes to cardboard.

I do have a couple cards that play actual sounds, but that's not what Tim sent. No, Tim evoked the sound portion of the hobby by shooting a couple issues from Pacific's Eight Men Out checklist my way.

In terms of dialogue, Eight Men Out might be one of the finest films ever made, baseball or not. The quote on the back of that Buck Weaver/John Cusack card is perhaps the most lasting line of the whole movie.

I can still hear it in my head. 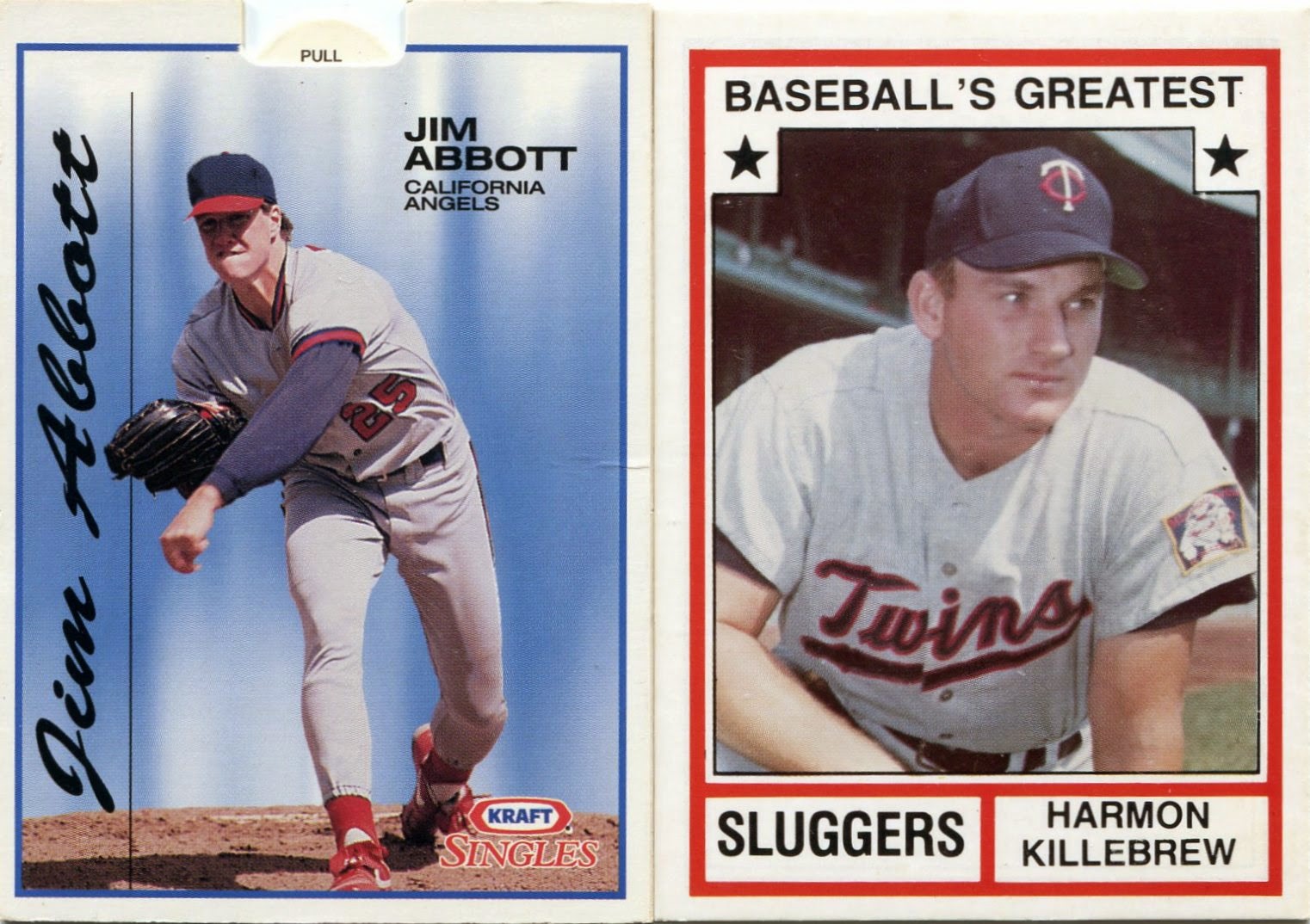 Oddballs are a combination of almost all the senses.

Lots of them look different then your standard baseball card. Some of them might feel different as well. And, although I don't have as much experience with this one, they might well smell different, too.

One sense that oddballs can bring to the table, however, is taste. No, I'm not talking in a literal sense. We don't eat our baseball cards. (Or at least I hope not.)

As you might already know, many oddballs are linked to various foods. That sweet new Abbott, for instance, was issued with packets of Kraft Singles.

Let's hope the cards aren't as processed as the cheese is. 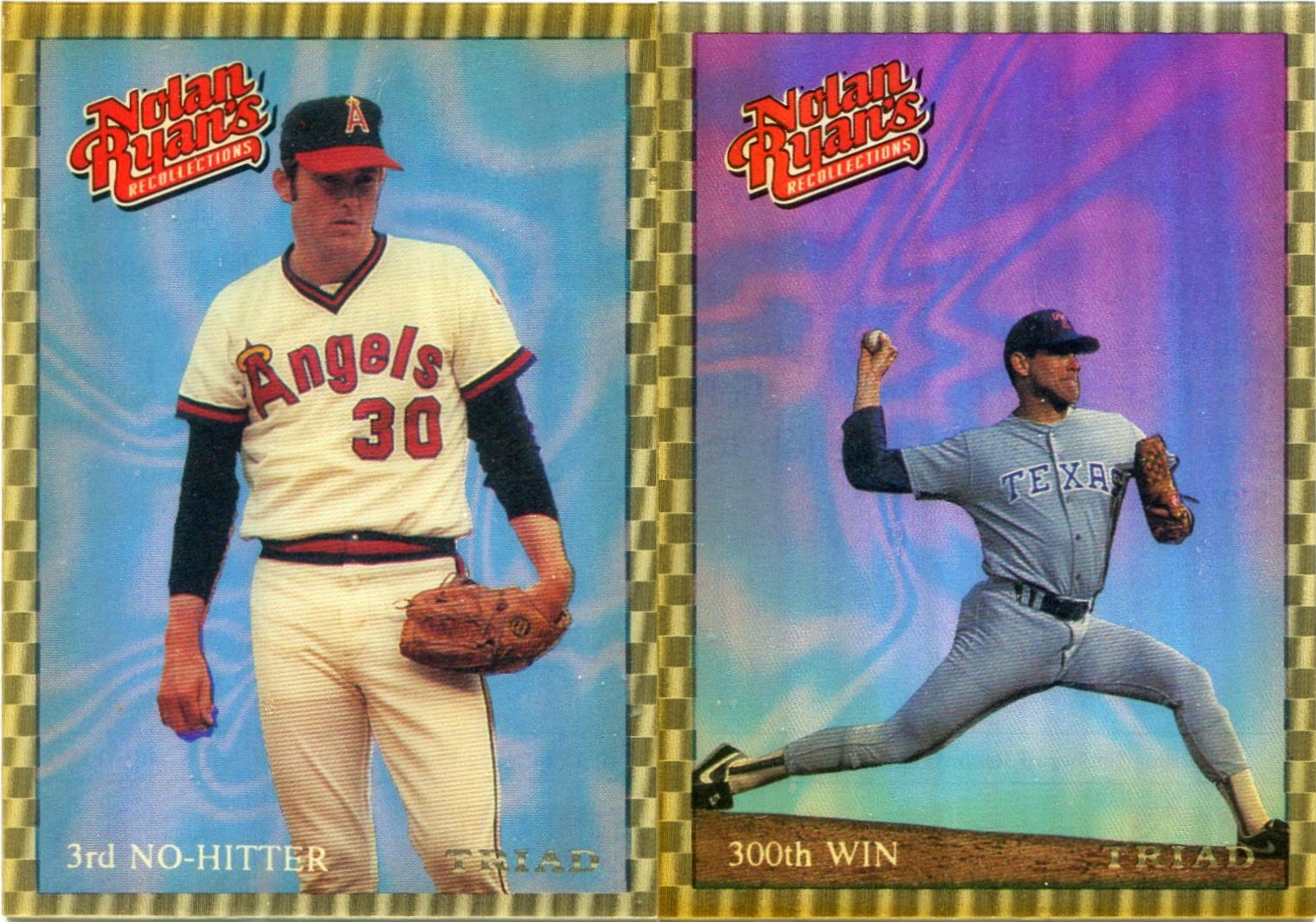 I'm guessing that Tim was influenced by a previous trade package I received a few weeks back.

Fellow blogger Julie sent me a few of these nifty 3-D Nolan Ryan cards a little while ago. Tim followed suit by sending me an unopened pack of them, a pack that contained these two beauties.

They're certainly a treat to look at, but, until Marcus commented on Julie's trade post a few weeks ago, I had no idea they were linked to food. Apparently, these were issued by the Whataburger chain in the '90s.

I don't think there are any Whataburgers here in the Midwest, but I've heard nothing but good things so far. The fact that they put out baseball cards has me liking them even more already.

Oh, and if these 3-D masterpieces has you thinking about another brand of tasty oddballs... 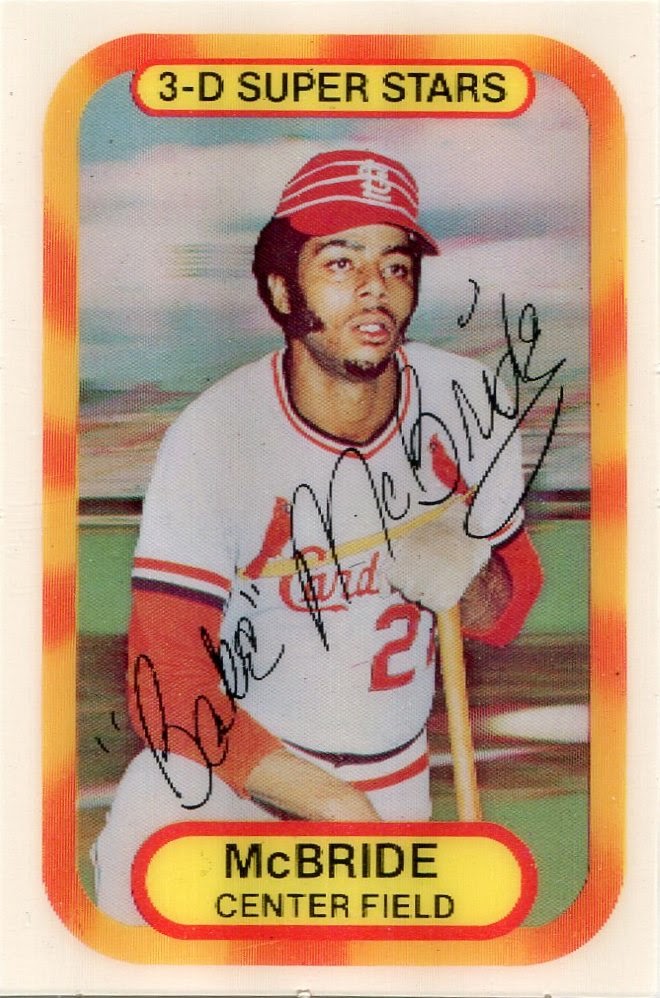 ...then you're on the right track.

In many ways, I'm a little late to the party with this hobby. I'll never know what it feels like to get baseball cards in cereal boxes. You kids of the '70s sure were lucky.

Still, I can't complain with the number of Kellogg's cards I've been able to pick up over the last couple years. Tim came through in a big way with this beautiful Bake. My McBride collection is only a few months old, but it's coming along quite nicely.

The fact that I know own a Kellogg's card of Bake instantly makes the collection about a thousand times better.

Oh, and smelling your baseball cards is completely normal.

Thanks again Nick! I love the creativity of this write up. Just wondering if you had ever seen the Kodak Jim Abbott? BTW, I actually smell my cards from time to time as well. Totally normal!

The very first thing I did when I got back into the hobby a few months ago, was to smell the cards. And I think it's my first (sometimes unconscious) reaction when I open a new pack of cards I've never seen before.
Smell always takes me way back, memory wise, and I'm in the hobby for nostalgia's sake, so that makes sense

I was going to say! If Vlad and you shared a birthday, surely we'd have heard of it by now.