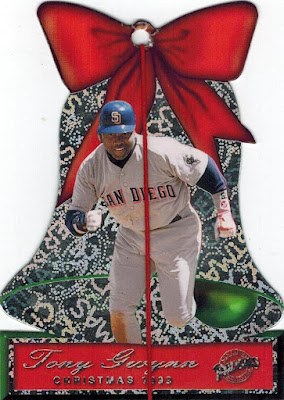 One of my complaints about the current state of the hobby is that there's simply not enough weird in it.
A lot of what card companies churn out these days seem to generally be the same things regurgitated over and over again. While the '90s were far from an idyllic time for baseball cards, I often miss those years because cards weren't afraid to be weird. Which is good for a collector like myself who embraces the weird in my own collection - I mean, could you see anyone putting out an ornament-shaped card these days? I can't, and I was lucky enough to receive this long sought-after card in a recent PWE from Jeff B. of the "Wax Pack Wonders" blog.
There are lots of ways to say "weird" in the English language - and it's uncanny how aptly a lot of those words seem to fit the cards I've been receiving lately, as well as the collection I've spent my life building. 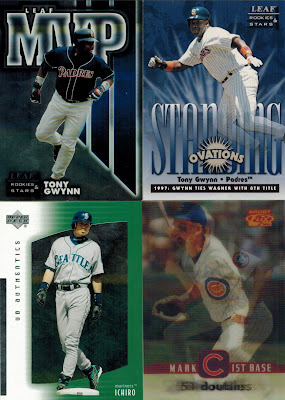 Peculiar
I never thought player collecting was peculiar - but then again, I recently acquired my 1,000th different Ichiro, and is there any sanity in having that many cards of a single guy? 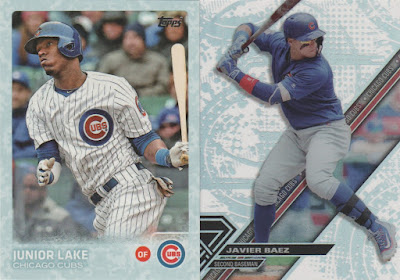 Curious
My lifelong Cubs fandom has meant I've formed attachments to some of the team's bigger names (Javier Baez!) along with more curious dalliances with the obscure (Junior Lake?) over the years.
I never thought of myself as a Junior Lake supercollector, but that snow camo parallel from Jeff has me thinking I've crossed that line. 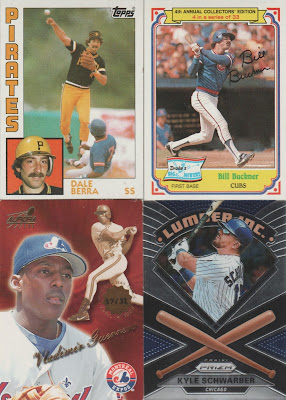 Erratic
Perhaps erratic is a better way to describe my collection - it sounds more proper than weird.
I have no way of tying these four cards from Jeff together - including that Dale Berra double dip I couldn't believe I didn't have, and a Vlad numbered to just 31 copies! - but what is this blog if not erratic? 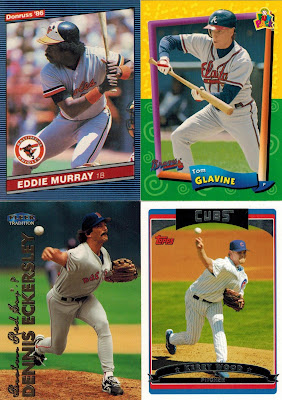 Quirky
There's really no rhyme or reason to the cards that appear on my Dime Box Dozen list - it's just a quirky mashup of any card I happen to remember I need.
Here, you have a mix of sunset cards (Eck), cards I owned a parallel of without the base card (Wood), pitchers hitting (Glavine), and cards I thought I had that fell to the gremlins (Murray) - all Dime Box Dozen needs no longer thanks to Jeff. 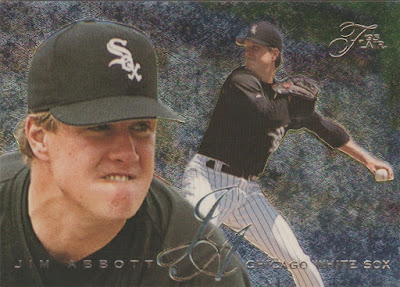 Wacky
And here's a fifth Dime Box Dozen suspect from Jeff - a needed card of Jim Abbott's brief White Sox tenure on one of those mid '90s Flair designs that always struck me as wacky. 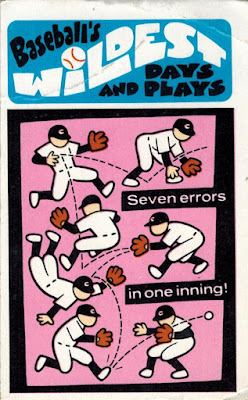 Wild
I've been trading with Bo of the "Baseball Cards Come to Life!" blog for a long time now, and he always seems to understand how much my collection teeters on the absurd.
These wild '70s Laughlin cards can be tough finds, so I'm always appreciative of any new ones that fall into my lap. 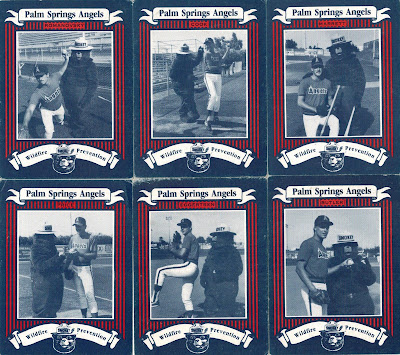 Funny
I've long been a fan of these funny Smokey Bear oddballs, but until Bo sent this batch over I had no idea they extended into the minor league ranks as well. 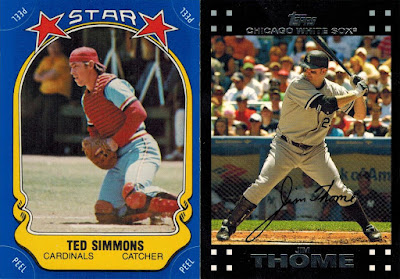 Funky
A couple more Dime Box Dozen needs, including a perilously common '07 Topps Jim Thome (that design still hasn't grown on me) and a Fleer Sticker of new collection favorite Ted Simmons whose cards always seem gloriously funky to me. 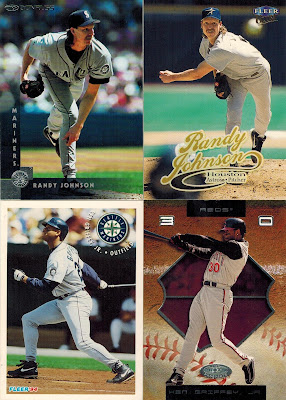 Remarkable
Given that I grew up watching baseball in the late '90s, it's remarkable how much I basically ignored cards of many of the stars from that era.
I'm doing my best to correct that now - in large part thanks to people like Bo - but I shudder at the thought of all the Randy Johnsons and Griffey Jrs. I still need. 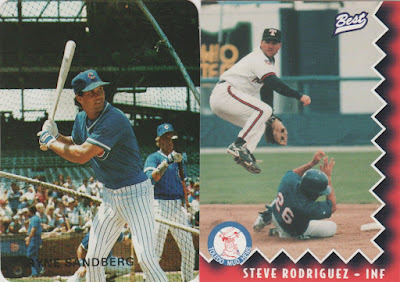 Odd
Few people I've traded with have sent more quality oddballs my way than Bob of "The Best Bubble" blog.
Bob stumped me with that Ryno oddball - seems to be one of those Broder oddities from the late '80s - and you know I'm here for all the minor league double dips. 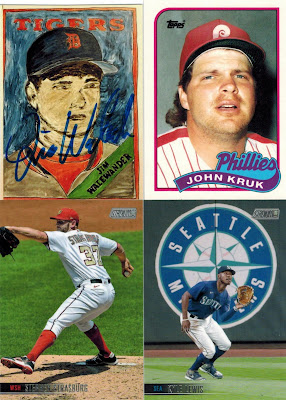 Bizarre
Kruks and Stadium Club base I need are cool, but the real star of this scan is obviously that bizarre autograph of equally-bizarre Dime Boxedonia favorite Jim Walewander! 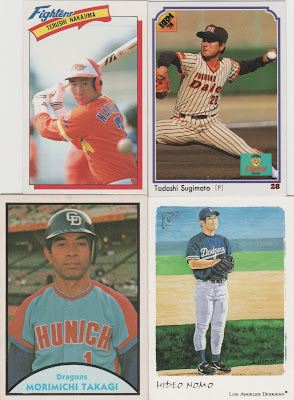 Far-out
Let's make this as clear as possible: I want all Japanese cards.
There's something far-out in knowing I have cards documenting the game as it's played an ocean over, and it's no accident that I've spent a good deal of time and money collecting cards of some of Japan's finest MLB imports (with Hideo Nomo being near the top of that list). 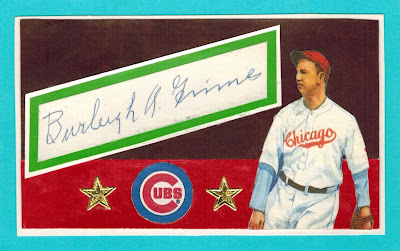 Crazy
Bob finished things off by sending what appears to be a real, actual Burleigh Grimes autograph(!) housed inside some kind of custom art project.
I have no idea what exactly I'm holding here, but if you'd have told me I'd one day own an autograph of a Ruthian-era baseball star and HOFer, well...I would've said you're crazy.
But that's my collection for you: crazy, wild, wacky, all of the above - just generally, and proudly, weird.
Posted by Nick at 5:32 PM

Obviously, a real Burleigh Grimes auto wins the round.

You seem to be fighting Fuji for some of these cards: Gwynn and Japanese players.

That Grimes is incredible!

Whoa on the Grimes!! That's (how about this one?) NUTS!

I'd like to think my collection contains some of the same adjectives. Part of the reason i enjoy this blog so much. Glad you liked the cards!

I'll triple up the Grimes Wow!. Topps put out Ornament cards in 2020 & 2021. Of course to me they are no where near the Pacific Ornaments in quality.

That '70s Laughlin card is indeed wild. You want Japanese cards? I've accumulated plenty of dupes over the years. Now I know where I can unload them.

Not enough weird in all culture these days.

I'd been wanting to send those Smokey Bear cards to you for a long time, but needed a larger package than a PWE.

Well there were ornament cards in the Topps Holiday set last year but I get ya.

That Grimes auto is pretty sweet!

Definitely not enough weird. Definitely way too much safe. Seems companies all over are scared of taking risks and prefer to make things as boring and lowest common denominator as possible.

There are more than a few cards in this post that I will now be keeping an eye out for.

Yes, the Grimes is the clear cut favorite, but good stuff all around!