COMC makes me less of a cheapskate 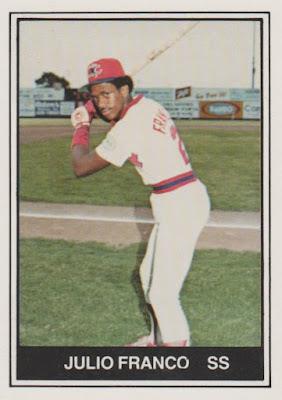 For a long time, I took pride in being a bit of a cheapskate when it came to buying baseball cards.
Part of this, of course, is because I simply had less money to spend on the hobby when I was 18. But even then, I refused to pony up ten bucks for a single card when I could get 100 dime cards for the same price. The deal was the most important part. Sure, sometimes those 100 dime cards are better than that big $10 splurge. But - and this is something I've only learned recently - not all the time.
Fact is, quite a few cards I need aren't anything I'm gonna find in a dime or quarter box, so not allowing myself to be open to slightly bigger purchases is basically cordoning off a healthy chunk of the cardboard universe. Whether or not the cheapskate part of my brain wants to hear it, loose change can't buy everything I want.
I've become more apt to throw a few bigger purchases (or whatever qualifies as such to me) in my COMC cart lately - stuff like this TCMA Julio Franco minor league gem I've long admired from afar that required a big, whopping $7(!) investment on my part. 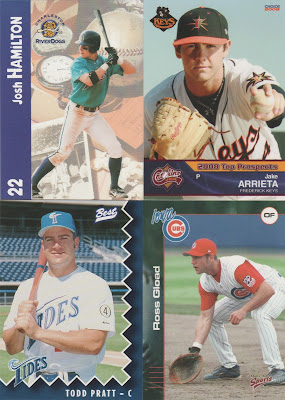 This isn't to say that I'm still not a cheapskate at heart - because so often while browsing COMC I can hear my brain go OOH, THAT'S CHEAP - BUY IT!!
Quite a few minor leaguers popped up in my latest order alongside Mr. Franco, and none of these four cost more than a dollar - especially love the minor league cards of Obscure Dime Box Favorites like Todd Pratt and Ross Gload. 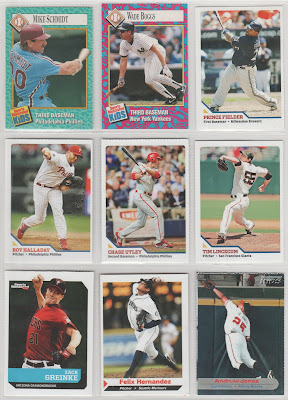 SI for Kids cards are an excellent mix of affordable and nostalgic for this '90s kid. 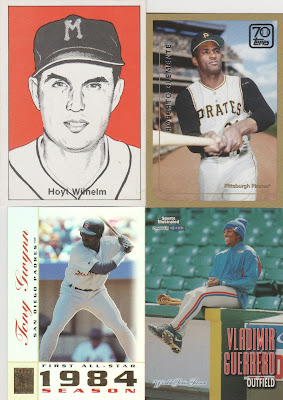 A few for the big player collections - I've wanted that goofy Vlad for a while now, and even the cheapskate in me couldn't bat an eye at paying a whole $2 for that Hoyt oddball! 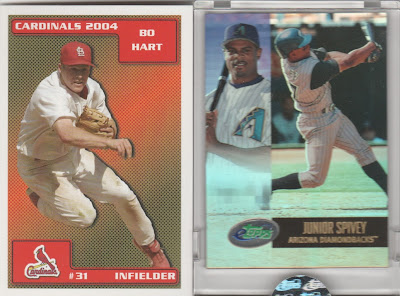 More from the obscure ranks of my binders with a Bo Hart stadium giveaway & an eTopps Junior Spivey that has since been freed from its ghastly plastic case, as the cardboard gods intended. 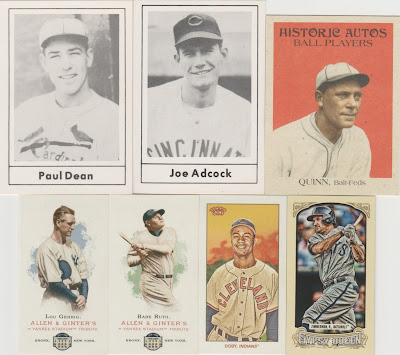 I love cheap Throwback Thursday singles, because where else am I gonna find a card of Babe Ruth on an obscure '80s Duran Duran card design? 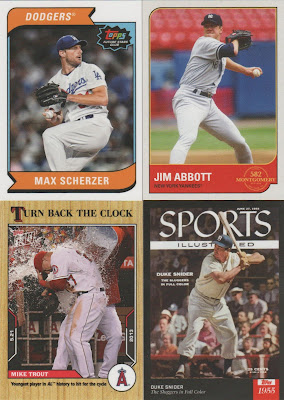 You can count the number of online exclusives I've purchased directly from Topps on one hand, but they're sure nice to grab on the cheap (really wish all those SI Magazine covers were as affordable as the 75 cents I paid for that Duke). 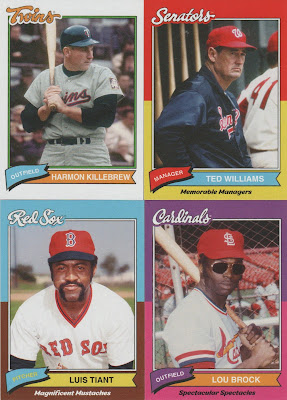 As you can see, I'm still fawning over this Super '70s online set - but when you've got stuff like new Ted Williams manager cards and Lou Brock in aviator shades, can you blame me? 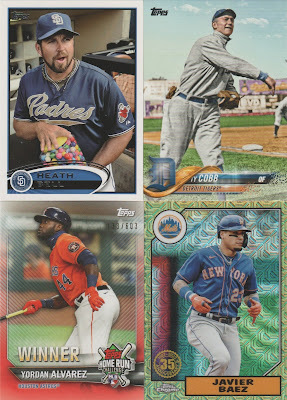 Other Topps specialties that caught my eye for whatever reason - happy to finally land a copy of that Heath Bell variation, the first and only card I've ever seen that features a bucket of gumballs. 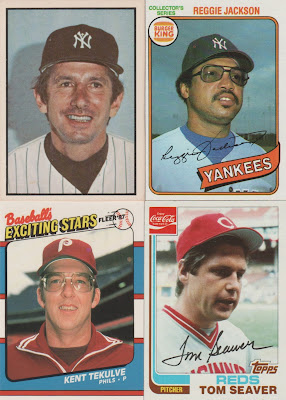 I seem to say it with every passing order - oddballs will always be my happy place on COMC.
While I love all food oddballs, ones that feature different photos than their standard Topps counterparts (like that '80 Burger King Reggie) are my absolute favorites. 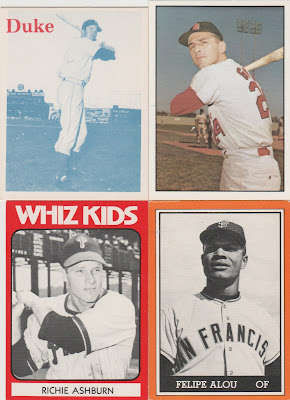 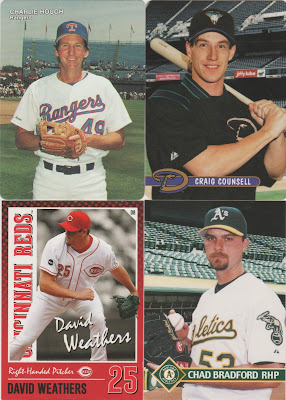 I've been on a big kick with stadium giveaway oddballs lately - and while I haven't gone to a game in a while, I don't hear about very many card giveaways these days.
Not that I need any more incentive to attend a ballgame, but the prospect of cards would make it a whole lot easier. 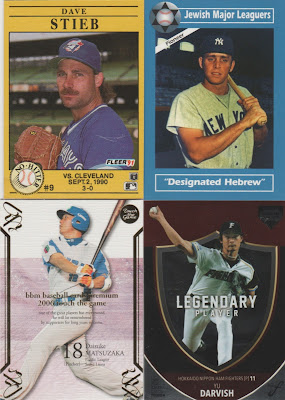 Some oddball miscellany here, including a neat box-bottom for my blossoming Dave Stieb collection, and a Japanese pitcher at the plate(!!!) with that Dice-K. 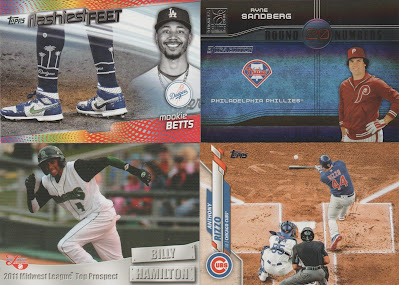 Horizontal heroes for the binders - I hadn't seen those "Flashiest Feet" inserts before, and I admit they're kinda cool. 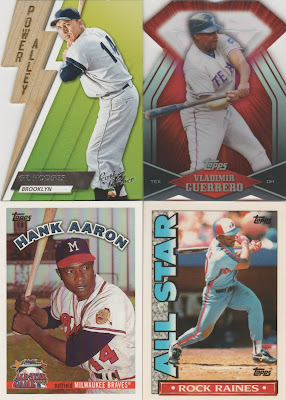 I never did redeem any of those Diamond Dig inserts from Topps's Diamond Giveaway promotion a while back, but thanks to COMC the Vlad is a pipe dream no more.
Couple that with Hank, Topps TV, and a Gil Hodges Panini insert that I actually really like & you've got a pretty darn nice scan here. 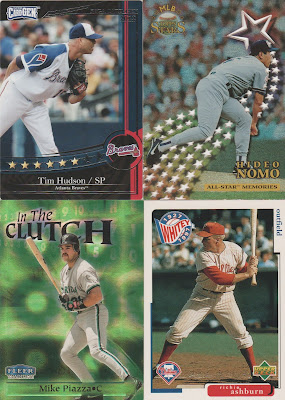 COMC is truly a goldmine for my schizoprenic collection - one minute I'm picking up Sega Card-Gens, the next I'm finding a Mike Piazza Marlins card I needed. 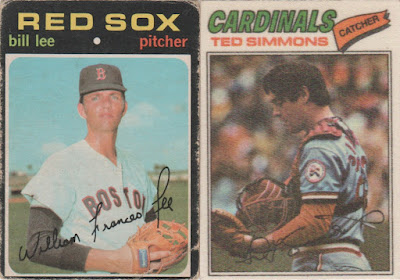 A couple they-aren't-what-they-seem vintage suspects here - the Spaceman is an OPC, and the Simmons is a cloth sticker. 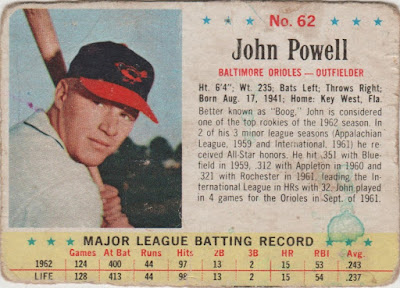 I can commend myself for not being too much of a penny-pincher these days, but I also won't deny there's still a big part of me that goes bonkers when I find a deal like this early Post Boog Powell for $1.50 on COMC.
I might be less of a cheapskate these days, but fact is I'll probably always be a cheapskate when it comes to buying baseball cards - and I guess I'll just have to live with that.
Posted by Nick at 5:58 PM

I think I'm right with you here. I used to try and sick to $1 or less on COMC. Now I'm much more comfortable stretching to $5 (and occasionally more). Been seeing more people pick up japanese cards too which is exciting to me.

It's so odd that Mike Piazza has any Marlins cards.

Nice cards. I like the Nomo Topps Stars and the Raines Topps TV. Is that Ashburn from the regular Collectors Choice set or some kind of oddball issue?

I'm a cheapskate - so much that I almost never buy modern cards on COMC because they're so much more than at card shows. But that'll probably change if I get a job.

Designated Hebrew for the win!... that is GREAT!!

I'm right there with you. You sure scored with that ComC package.

So weird to see a Sandberg Phillies card.

I find that being a cheapskate means having patience. Eventually I find the card I want at a price I'm comfortable with, even if it means waiting years.

That Mookie Betts card looks like it says Fleshiest Feet.

I like to think that somewhere out there, Julio Franco is still playing baseball...

I'm with Mike..."Designated Hebrew" for the win! How can Dime Box not even mention it?