I got a raise, so I bought some Big League 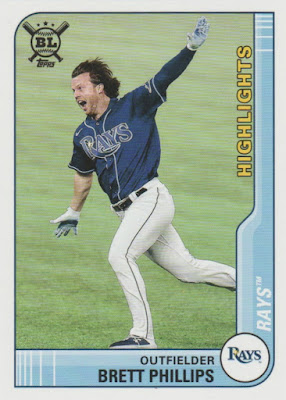 For once, I have some good job-related news: I got a raise at work, and since this seems like a cause for celebration, I went out and bought a box of 2022 2021 Big League.
Big League is among the last affordable sets out there, and it's really the only one of those I like enough to buy a box of. But I wasn't planning on splurging on much of the latest stuff for the simple fact that this set is already a year old! If I remember right, the original release date for 2021 Big League was last spring, and I assumed for a long time that Topps was just going to scrap it all together. I wouldn't have blamed them if they did.
But alas, here I am buying a 2021 product in early 2022 - but with a little extra money in my pocket, I figured I might as well give it a go. 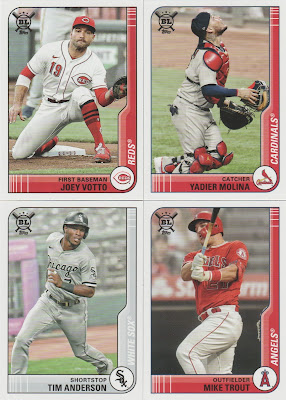 I ranked Big League as the 2020 Set of the Year, so naturally I had high hopes for the encore.
And while it probably would've been impossible to live up to my lofty expectations, I have to admit that 2021 Big League is...a bit of a dud. The design is neat and much more colorful than anything else Topps is putting out, but the set as a whole just doesn't feel exciting. The photos lapse into the general sameness that has plagued Flagship for the last decade & I really don't feel there was any great effort put into trying to continue the momentum I've felt with Big League ever since it first came out in 2018.
It seems weird to say, but even with the year-long delay, this set feels rushed. 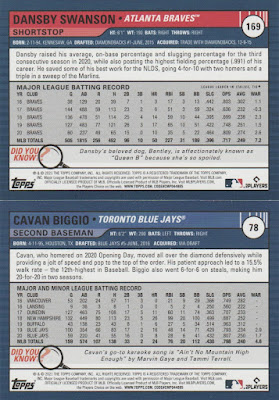 The backs continue to be among the most notable in the industry, and still give us facts that are genuinely fun about our favorite big leaguers. 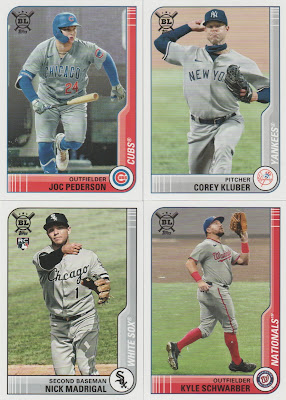 The weirdest part about this set is that the checklist was obviously finalized a ways back, and despite being released here in spring of 2022, the set reflects what baseball looked like a year ago.
That means a lot of guys aren't even with the teams they're pictured with here, and some - like Joc Pederson & Kyle Schwarber - are actually two teams removed from their featured early-2021 duds. 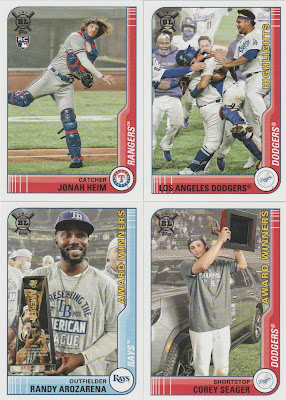 In years past, it seemed like every single pack of Big League would have a few cards that were interesting and just generally made me happy.
I opened a whole box of 2021 Big League, and only found a few. 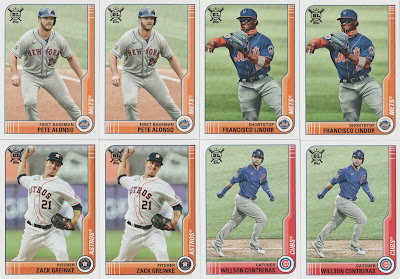 This is a quibble with the particular box I ordered, but wow were there a lot of doubles in there - wasn't very entertaining pulling the same cards over and over again. 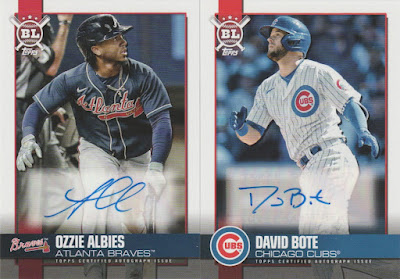 Adding additional weirdness was the fact that I pulled two autographs in consecutive packs, which was unexpected to say the least since I think autos fall around 1:700 packs or something.
David Bote is a local fan favorite who seems to have fallen off the face of the earth, and I actually recouped a good amount of what I spent on this box by selling the Albies (not that I ever plan on recouping any money I spend on baseball cards, but it's nice when it happens). 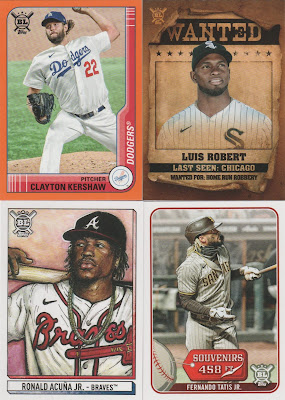 The orange parallels remain a fun corner of Big League, and most of the inserts are okay but nothing to write home about. 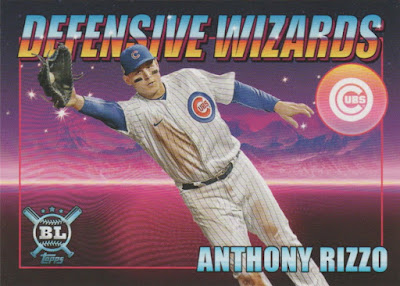 Now these I like, and they're the sum total of what I generally enjoy about Big League: lovingly flashy, sometimes strange, and oddly beautiful.
Sadly, they're an anomaly in this year's last year's mostly dull offering. I admit that Topps had a lot working against them here - very of little which they were likely able to control - which accounts for why so much of the box I opened just felt off. My hope is that this is merely a speed bump onto bigger and better things for Big League. Given the set's track record, I tend to lean towards thinking it will be.
And while I wasn't exactly floored by the box I bought, I think you'll agree with me that there's far worse ways to celebrate a raise, right?
Posted by Nick at 5:22 PM

Yeah, it doesn't seem to live up to past years based on what you've shown here.

That Rizzo is great, though, and straight out of the mid 90s!

I bought a blaster of this and was wondering if you'd gush over the cards or see some of shortcomings you did point out.

I thought it was mostly a snooze fest with the most exciting images coming from the Highlights subsets.

Many of the images on the base portion seemed to be cropped tight and reflected when these cards were supposed released, which was the year after the pandemic when there were no fans in the stands.

Congratulations on your raise.

Glad there were a few good ones, at least... the fat pack I have for you was a bit same-y , as you mention..

I was thinking about the two-teams thing watching the Nachos break. It was really weird seeing, for example, Javier Báez as a Cub in a "new" product, when he's already been traded to the Mets AND left as a free agent. They really should have released this and just had the action-figure boxes come along later. In this environment it still would have sold.

Congrats on the two autos! And on the raise, which I'm sure you deserve!

I thought the set was nice enough, probably a top 3 set from 2021 (if you can actually count it as one of last year's sets). I dunno, my enthusiasm for modern cards has dropped dramatically lately so I'm probably not the best judge of things.

I was let down on the set too. The Albies auto was a nice pull. Congrats on the raise.

Congratulations on getting a raise... and pulling two autographs!

Congrats on the raise. I can honestly say that my last few raises may have accidently been redirected into the hobby as well... I haven't bought any of this years' BL, but does seem as good as previous efforts. As for the weirdness of players being "out of uniform" I'll take the historical aspect of it and as years go by a talking point of the time we lived through.

Congrats on the raise! And you made your money back on this box, so you get a "free" chance to try again on something else!

Congrats on the raise! This might sound bizarre, but I think this set is “too low end”, even if it is marketed as a low end set. Unlike 2020’s excellent Big League effort, this set really feels cheap across the board — design, photos, subsets, etc. This was a perfect opportunity for Topps to really cut loose with a unique design like 1986’s flagship.

The Baseball Gods rewarded your raise with 2 autographs, congrats sir!

Crazy to pull 2 autos from one box! 1 would be amazing. 2 is just crazy! I like Big League, but haven't been buy any packs or boxes recently. I do want to read more of the backs and see some more fun facts! It is crazy that a 2021 product was released mid 2022.

Congratulations on the raise!