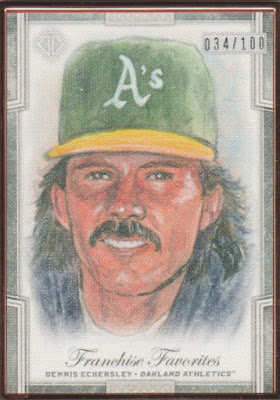 This card cost me $3.85 on COMC, which is, for this low-end collector, an expensive piece of cardboard - especially if we're talking modern stuff.
But that price is downright laughable when you consider Eck is an insert from a brand called Topps Transcendent - boxes of which sell for $25,000 (or, more than I make in a year). I shouldn't have to tell you how purely unfathomable a price like that is to me - a person who had to hem and haw about spending less than $4 on a card. Who the heck a) has that kind of money to waste, and b) decides to spend it on a box of cards where you don't even know what you're getting?
Plus, all things considered, my first (and, for the near future, only) Transcendent isn't even that exciting of a baseball card - serial numbers don't do much for me, and I've never been a huge fan of sketch-based inserts. Not to mention it's housed in a weird gilt frame that made it darn near impossible to slide into my A's binder.
(And yes, now that I think of it, I might be the only person who has Topps Transcendent stuff in a nine-pocket page.) 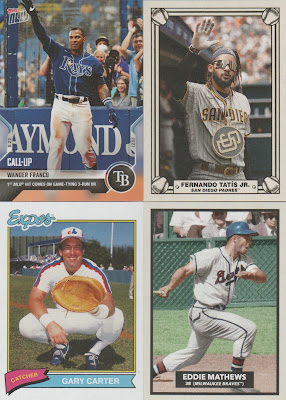 I've found myself flocking to COMC more often than usual lately - didn't I just get an order from them? - and along with Mr. Eck, this latest batch featured a whole lot of stuff I'd probably never see were it not for their inventory.
I'll say again that I think a lot of Topps's online-only stuff is better than what they're putting in packs - I would've bought reams of those Super '70s cards if they were issued in normal (see: retail) form. Give me that Gary Carter over another Bryce Harper insert any day of the week.
Against my better judgment, I've decided to put Wander Franco into my binders, and while I'm not gonna pay the crazy prices most of his cards go for, I didn't mind shelling out a shade under $3 for that Topps Now card 500,000 people bought last year (and are apparently taking losses on). 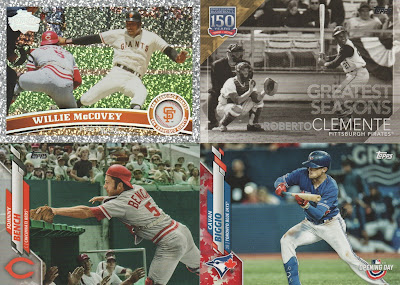 COMC is even good for stuff I missed/never saw from sets I purchased in great quantity - the Biggio is a Canada Day parallel from Opening Day, and Johnny Bench makes appearances in both featured and cameo form here. 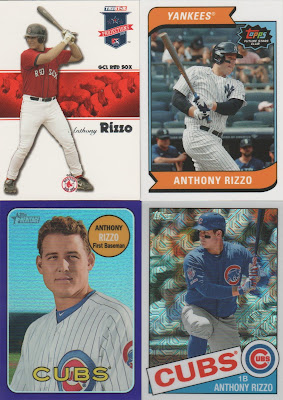 Really went all-in with the Rizzos this time around (still hurts to see him in anything other than a Cubs jersey). 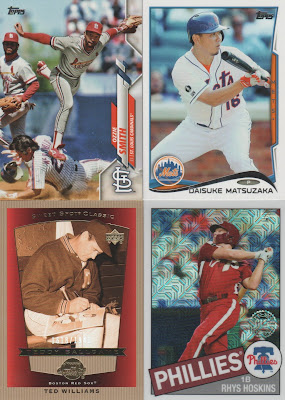 Mini-collection hits galore, including a couple sweet photo variations with the Ozzie & Dice-K (anyone remember him on the Mets?). 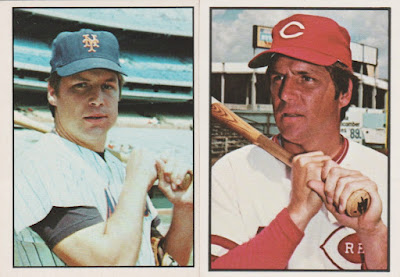 I feel like someone at SSPC missed the memo that Tom Seaver was, you know, a pitcher. 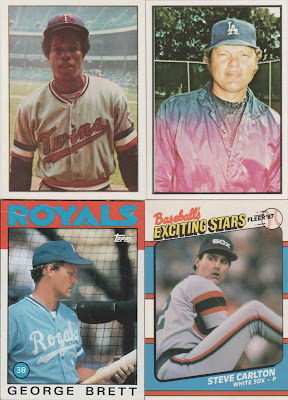 Finding a cheap oddball I need on COMC remains an incredible thrill - I could probably collect for 1,000 years and still not get all the '80s Fleer box set stuff I want. 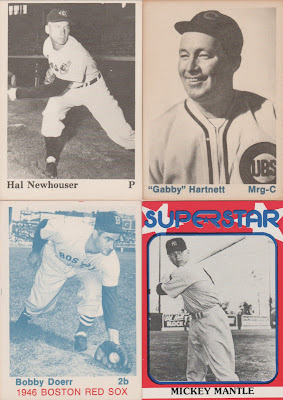 TCMA will never let you down. 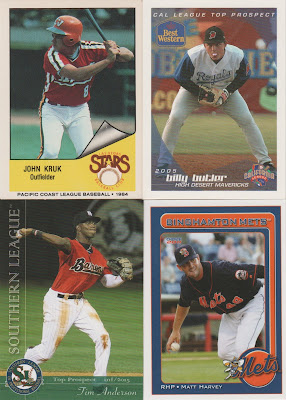 Buying minor league stuff on COMC can get a bit dull - takes a lot of sifting through guys who never got past Single-A to maybe find something I need.
Sometimes I start to question if it's even worth it...until I find that John Kruk or Tim Anderson I don't have and then OF COURSE IT'S WORTH IT! 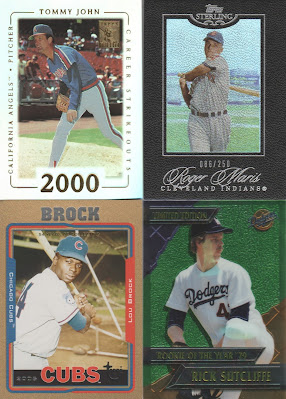 Fancy cards of famous guys in unfamiliar uniforms - I'm on an unofficial quest to get all of Roger Maris's Indians cards.
A couple of our resident Dodger bloggers have posted about that Chrome "Rookie of the Year" set in the past, and while the Sutcliffe was a bit more than I planned on paying (a whole $2.75!) I bit the bullet because when am I ever gonna see that one again? 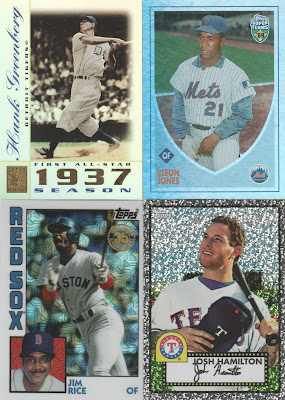 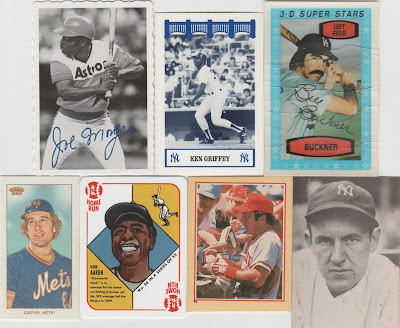 A bunch of minis with absolutely nothing in common except they're all excellent - though my favorite has to be the Kellogg's Buckner (how did I not already have that one?). 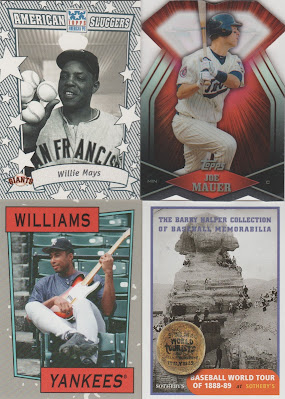 I try to divide my scans into as many different (somewhat) sensible themes as possible, but inevitably there's gonna be cards that just don't fit in anywhere else - which is what we have here.
The Mauer was a prize from Topps's "Million Card Giveaway" mania about a decade ago (remember that?), and the Throwback Thursday Bernie seems especially fitting given Topps used a design from an '80s Duran Duran set there (wait, Duran Duran had baseball cards?!). 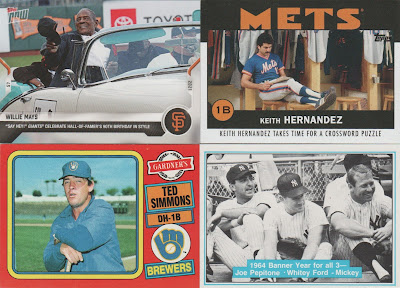 More randomness, including a card of Keith Hernandez doing a crossword puzzle(!) that was issued in conjunction with ESPN's (admittedly excellent) "30 for 30" series on the '86 Mets last year. 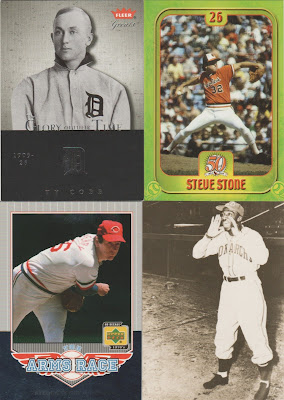 I can't think of any possible way to tie Ty Cobb, Steve Stone, Gaylord Perry, and Cool Papa Bell together. 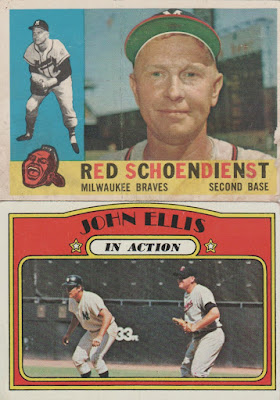 I don't know if it's my imagination or what, but online vintage prices seem to be taking off, which means it's harder to find cheap(ish) ones I need on COMC.
I did manage to get that Schoendienst for pocket change, and I'd somehow never seen that '72 John Ellis before (note the Harmon Killebrew cameo!). 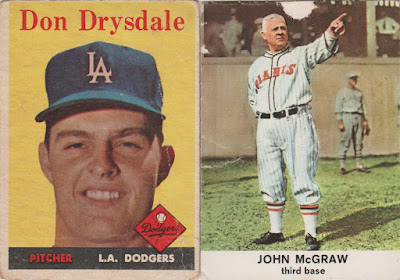 A couple big names that fell through the COMC cracks - an eager young collector scribbled red marker all over the back of the Drysdale, but I guess I should thank him because there's no other way I'd be able to get that card for five bucks! 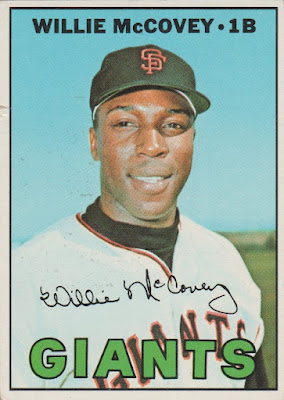 Decided to make a big "splurge" and knock out a Keep Dreaming suspect with this '67 McCovey - it's a card I've long wanted, and for a whole $8.75 I figured it was time to put an end to coveting it from afar.
If, upon leaving for work one sunny afternoon, I walked out the door and, by some miracle, $25,000 fell from the sky and into my arms, I really don't think my card-buying habits would change very much. I'd still chase box set oddballs, shiny stuff, and more of the same types of crazy cards I always seem to snag from COMC.
I sure wouldn't be spending it on a single box of baseball cards that doesn't, for my money, offer anything that's even half as purely enjoyable as a '67 Willie McCovey, I can tell you that.
Posted by Nick at 5:30 PM

All I can think of is that Ty Cobb, Steve Stone, Gaylord Perry, and Cool Papa Bell were all born east of the Mississippi.

Man, we were so spoiled with the diamond parallels back in 2011, weren't we? I wish Topps would bring them back.

What is that Carter from??

Quite the mix, cool oddballs. Love that Super 70's, I'd buy a set if I could find it.

COMC is having a sale right now, and you've given me some ideas of additional things to look for, like that Gary Carter from the 2020 Topps "Super 70s" online exclusive (which I spell out for Mike Matson's benefit, should he read this comment).

That McCovey is nice... I need to remember to spend my hard-won COMC credit on bigger cards every now and then (but vintage seems awfully expensive these days)

A lot of great stuff in there.

Plenty of cool stuff in this post...and if I ever happen to find a box of those Duran Duran cards at a decent price they are mine.

Very nice. My COMC order just shipped. I can't wait for it to get here.

I do remember Dice-K as a Met, but only because I happened to attend his first game with the team. Even got to see him warming up up close. I got the tickets about a week before and at the time if you'd given be a couple dozen guesses as to who would start for the Mets that night, I wouldn't have gotten it (Dice-K was with Cleveland's AAA team at the time).

I've toyed with buying something from Transcendent on eBay from time to time, but haven't pulled the trigger. There are things which aren't SUPER expensive, but still pricey for me.

There's always at least a handful of cards in your posts that I've never seen. This one is no exception. The 1986 Topps Keith Hernandez crossword card is really cool. Is that a Throwback Thursday card too?

I love how all these different pieces of cardboard give a sample of the variety of cards you can find and the moments they capture of a diverse number of big league players.

Some cool things in there. Will have to look up that KHernandez.

I found a '67 McCovey for a bargain a while back too at a show. Somehow that card is super attainable. Not complaining...

I submitted a box to put up on COMC about a month ago. They got it, but the site says it may take until early August to get the cards up on the site. I thought they caught up???

Was pulling '72 for DevGav yesterday and saw that I had three of those Ellis in Actions I think. maybe not as straight as that one.

That Eckersley is hideous.

I will never understand the appeal of the crazy expensive boxes, but since those are clearly made for folks in a much higher income bracket than I, it isn't something that I'll ever lose any sleep over. And honestly, from what I've seen in recent years, they can keep their expensive boxes to themselves.