All the old dudes, carry the news 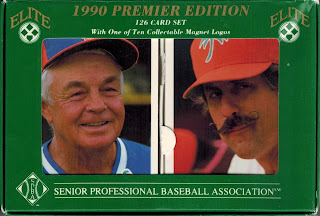 I realize now that my entire knowledge of the short-lived Senior League exists almost exclusively through baseball cards.
I've never read an article about it, and I don't believe I've seen any game footage of the players in action (is there any?). No, pretty much all I know about the Senior League - which lasted one full season in 1989 and part of another in 1990 before folding - comes from the few card sets that were issued in conjunction with the ill-fated group of one-time stars. (Which makes sense, since the league existed during the heart of the ill-fated overproduction era.)
But my discoveries about the Senior League are by no means complete - I had no idea this "Elite" Senior League set existed before I saw it featured on Night Owl's blog, and by a strange coincidence, I requested & received a spare copy of that very same set from (a different) Greg of "The Collective Mind" shortly after. 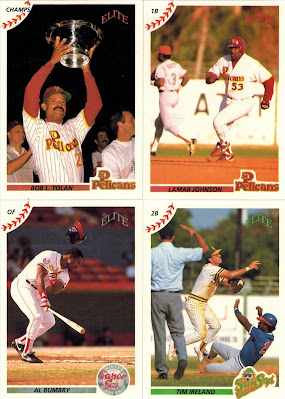 Even just a few cards in, I knew this was my new favorite Senior League set of the lot.
Most of the other SL cards are poses and give off the impression that this is just a group of former stars who got together to recapture old times. This Elite set, however, shows that while you'll see a collection of once-familiar names, this was a league, and these guys actually played.
And even beyond that, judging by flying helmets and double dips - they played to win! 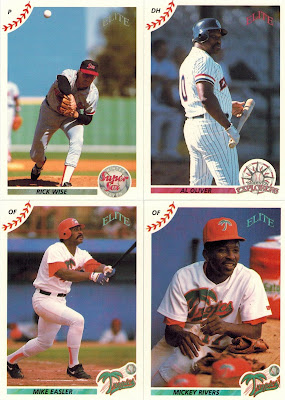 Now, granted, a lot of my enjoyment of Senior League cards stems from seeing familiar names in the newfound twilight of their baseball careers.
Because of the relative lack of information regarding anything about this league, I'd probably never know that Dime Box favorites like Al Oliver and Mike Easler played in the SL later on. While these cards have stats on the back (Mike Easler hit .323 for the Tropics!) they don't show up on their major-league stat sheets, and without these cards I can't help but think they'd have been lost to history all together.
And while there's a lot of great cards in this set, I've chosen ten particular favorites that I'd love to show you in no particular order. 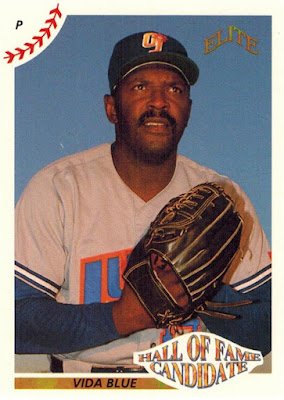 While it was called the "Senior League," quite a few of the guys who appeared in it weren't far removed from their big-league playing days - like Vida Blue, who pitched his last game for the Giants in 1986. 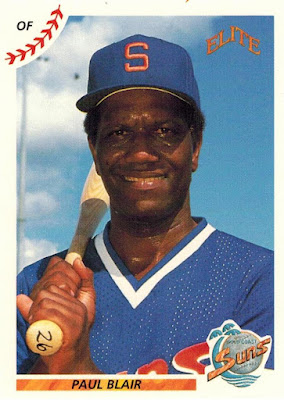 Paul Blair is a criminally underappreciated ballplayer, but what grabbed me here is that very Seattle Pilots-esque cap. 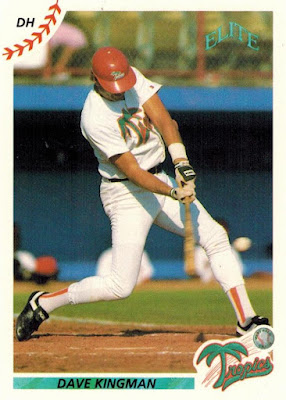 Even in the Senior League, Dave Kingman looks like he's about to hit every ball 900 feet. 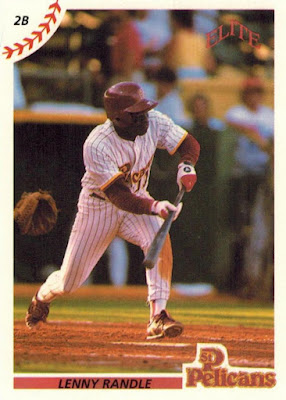 Lenny Randle cards make me giddy, and it warms my heart even more to see him trying to lay down a bunt. 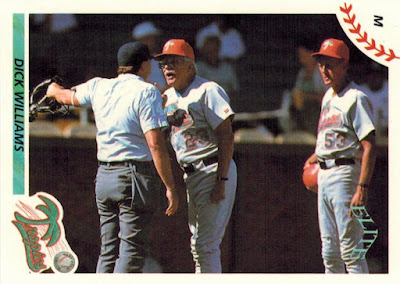 Lest you think those Senior Leaguers didn't take these games seriously. 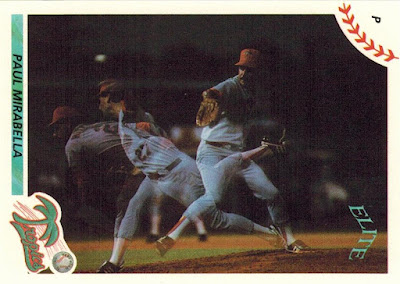 The photography in this set is shockingly nice and actually better than a lot of the big-league cards that were being issued at the same time - these multiple-exposure shots weren't just reserved for Upper Deck!
(Interesting side note: somehow Paul Mirabella actually pitched in both the Senior League and the majors in 1989, and was a big-leaguer again in 1990.) 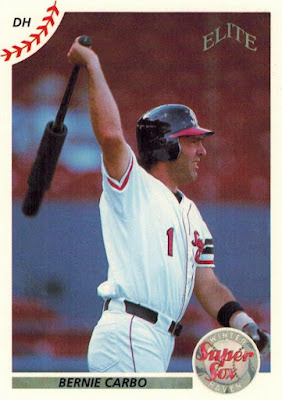 Unless my memory fails me, I don't recall perpetual Dime Boxedonia favorite Bernie Carbo appearing in any of the other Senior League sets, and without this card I probably would've never known he played for the good ol' Winter Haven Super Sox. 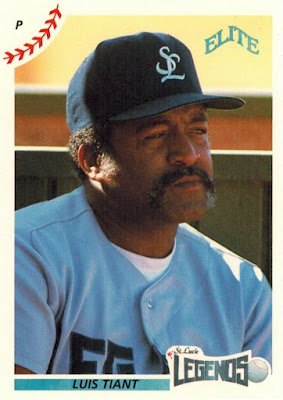 The Senior League did nothing to stop Luis Tiant's facial hair. 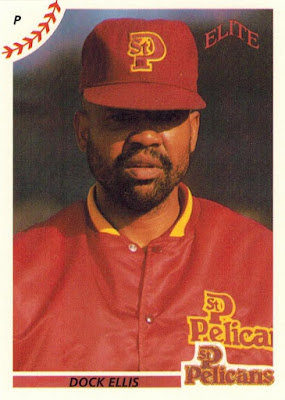 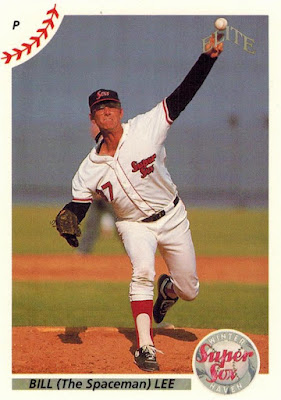 Bill Lee is the definition of a Baseball Lifer, so it only makes sense that he played in the Senior League.
Commercially, the failure of this league is obvious - I can't imagine it was very successful given how quickly it folded. The fact that very little is even known and/or remembered about it all these years later seems to highlight its relative obscurity in the annals of baseball history.
But at the risk of sounding maudlin, I think there's something to be said about guys like Lenny Randle and Dock Ellis getting to play the game that made them beloved one last time, and I feel like this set is the one that most properly documents the forgotten glory that was the Senior League
Posted by Nick at 5:25 PM

These are just fantastic.. I never knew anything about the SL until you told me!

I don't think I ever cared for senior league cards, but I always thought that Pacific was the only card company that printed cards for the league, when there were at least two or three other companies [including Topps].

That set REALLY wants to be an Upper Deck set, doesn't it? Well, there are worse things to emulate, for certain!

It sure would be great for a "senior" league these days. I'd be all in.

Bernie Carbo was in the Pacific set as well featured 1 of 4 subjects featured on the backs of the logo stickers Inserts the other players were George Foster Bobby Bonds,& Amos Otis if you are interested in a set of them send GCA a note saying have your friend send me a set.

I hope to one day stumble across this set at a show or flea market. Checklist looks solid. And Dock looks like he's in his late 20's/early 30's.

I don't know if you care or not, but there are/used to be a couple of complete and partial games on YT. I watched the couple that were on there a couple of years ago, and found those games to be quite enjoyable. I should probably now go look and see if anymore have been added.

With all the money players make nowadays, I can't imagine there being enough incentive to ever have another Senior League. It's a shame too, because we all know Bill Lee can still pitch! (https://www.espn.com/video/clip/_/id/33632347)

I was just thinking what Matt typed. I think a resurrected Senior League would be quite popular now.