We're not from here 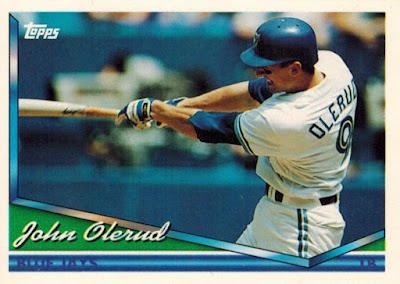 It seems to me that most collectors have at least a passing interest in cards from foreign lands.
I think a lot of it has to do with scarcity - many foreign oddballs had to cross borders or even oceans to get to us here in the US of A, which means they're not readily available. The simple rarity makes them interesting. But for me I think there's something more - call it exoticism, but I take a special pleasure in creating a collection that features cards from all around the globe. They mark baseball as a world sport, and not just an American one.
I suppose that's why I took a special pleasure in this card I recently received from a reader named Michael R. - nope, it's not the standard '94 Topps Olerud I've been sent many times... 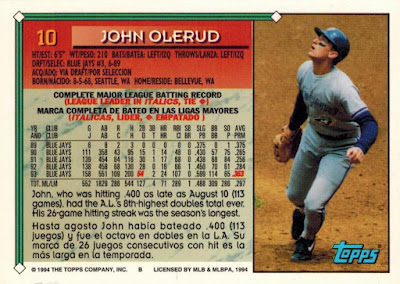 ...but a '94 Topps Spanish Olerud!
From what I can tell, these were issued in factory sets at the time, and while I've known about 'em for a while, this is the first one that's actually found its way into my collection - I'm often surprised that there haven't been more Spanish-themed cards over the years given how big baseball is in the Mexican/Latin communities. 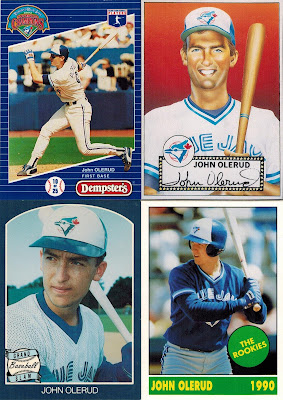 I never quite know what to expect when I receive an I've-got-cards-for-you email from a reader, but it's always exciting.
Little did I know there'd be a whole heap of Broder-ish and generally excellent Olerud oddballs in this package from Michael, though. 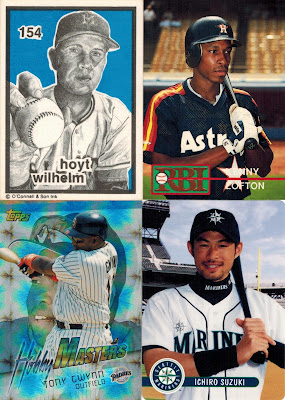 More fantastic cards of a few top-tier dudes - not every package I get has new Hoyts or Kenny Lofton Astros cards I've never seen before!
I've also been on a huge stadium-giveaway kick lately, so that Keebler's Ichiro (from his rookie year, no less!) was an incredibly special treat. 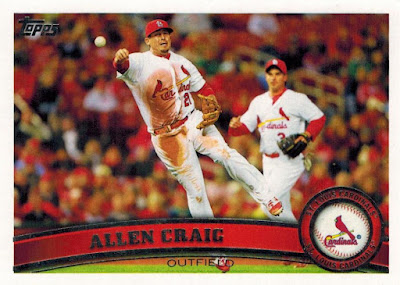 I don't know whether it's part of the Mike Trout Effect or not, but I've had a hard time finding Allen Craig's standard base card from 2011 Update (yes, I still collect Allen Craig).
It'd been sitting on my Dime Box Dozen list for many moons before Michael finally came along and speared it. 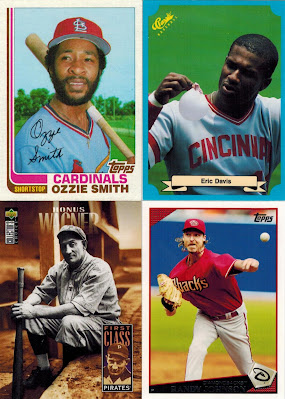 But that wasn't all - Michael hit three more Dime Box Dozen needs (how great is that Eric Davis?), and even a Keep Dreaming card with the '82 Topps Traded Ozzie!
The Ozzie isn't super rare, but it's always been priced just a bit more than I've wanted to pay - my next big Ozzie need is his '79 Hostess, but it'll probably be a while because have you seen how much that card goes for? 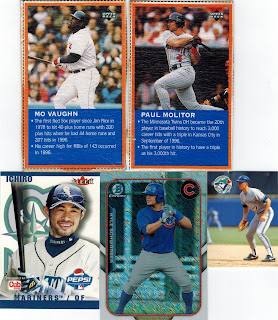 With oddballs and Dime Box Dozens out of the way, the next logical step was minis.
The Mo & Molitor are neat, but I haven't been able to find a shred of information on 'em, which I suppose is the mark of a really good oddball. 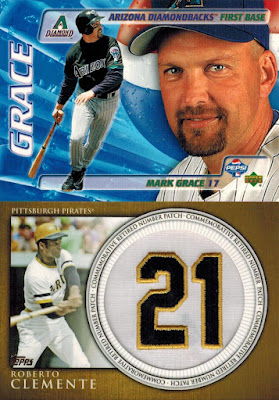 I like food-issue cards way more than manu-patches, but a Roberto Clemente card is cool no matter how you slice it. 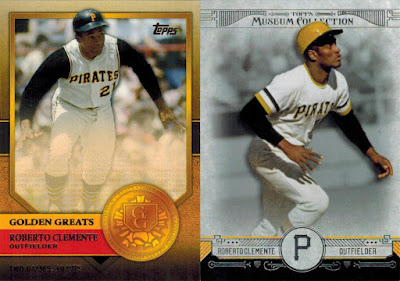 And two more are even better! 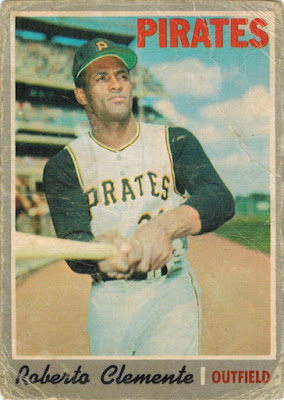 The first thought I had when this slid out of the package from Michael was something like wow, I guess my collection has come a long way when I'm getting DOUBLES of vintage Clementes.
It's true - I've had this '70 Clemente in my collection since I was a kid (one of the first "big" cards I ever owned), but in the end I guess it's a good thing I flipped it over... 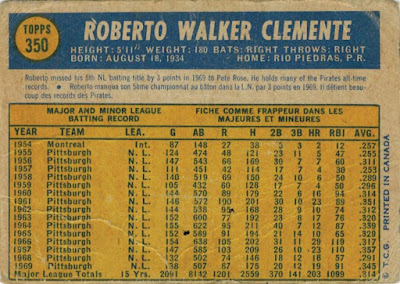 ...BECAUSE IT'S AN OPC CLEMENTE!
OPCs are the prime example of the baseball-card exoticism I was talking about - very little distinguishes these from their Topps counterparts aside from the simple and excellent fact that they feature French on the back. Regular Topps vintage of huge stars is hard enough to find, and it should come as no surprise that this mic-drop from Michael is the very first OPC Clemente I own (and actually the first one I've ever seen, now that I think of it).
Adding a vintage Clemente to my binders is a banner day, but a foreign one makes it a truly watershed event, yes?
Posted by Nick at 6:43 PM

My goodness, what a sweet package!! Good stuff all around.

A lot of good stuff, and that OPC Roberto is awesome.

Clemente was a boss.

Wow, I don't even know where to start, so I'll just say what an amazing batch of cards. Very cool Clementes, cool Ozzies, and nice everything in general. Not a bad card in sight.

I spend enough time collecting USA cards,leaves me no time for foreign cards.

I remember seeing the Ozzie Smith & Nolan Ryan 1979 Hostess strip at a card show before the pandemic. The guy wanted something crazy like $100. Guess that seems like a pretty good deal these days.

Congratulations on landing the Keebler Ichiro. I've always thought that card was under-appreciated. Love SGA cards... especially when they feature guys like Ichiro.

I don't think I even knew there was a 1994 Topps Spanish set. I'd sure like to find at least a few of these...like, say, the Olerud!

I do like the idea of exotic cards, which makes it a shame that the foreign land I half-live in (during non-pandemic times) has no baseball cards, or even any real local sports cards. You can get Topps Attax soccer cards easily enough in Singapore, but I don't think they're any different from what you'd buy elsewhere. Only once have I even found Japanese baseball cards there--a local Japanese shop got some Calbee baseball chips, so I bought a couple bags.