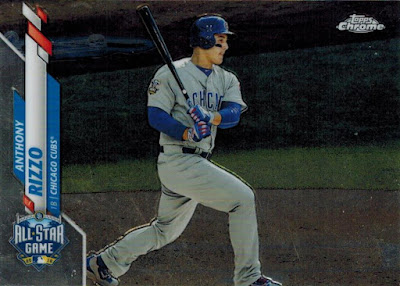 For the first time in my life, I'm starting to get a little disillusioned with the game I love.
I will argue to my dying day that baseball is the greatest sport there is. My feelings for the game on the field will never change - pure beauty, for me, takes the form of a flawless double play turn, a wicked curveball, and yes, even a good sacrifice bunt. But off the field, baseball is hurting me. At the risk of sounding like a pretentious purist, I think a lot of the game's problems come from the fact that it's run by people who don't really care about baseball at all, and see only dollar signs and sponsorships.
You've no doubt heard by now that we've entered into a lockout that was a long time coming. This is the first work stoppage of my baseball-watching life (I was two years old during the '94 strike). And even if all goes well and the problems get solved before spring training, I can't help but think there's some irreparable damage being done here.
I'm starting to wonder if baseball is only going to get further and further away from the version of the game its truest fans really love. 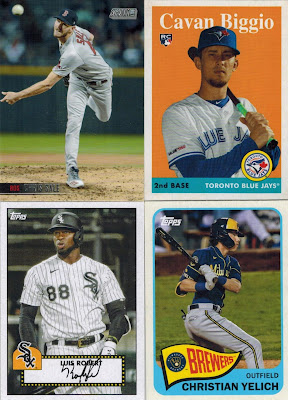 All this is compounded upon the fact that my favorite team launched a fire sale that included many of my favorite players, and the Fanatics-led card industry will soon be treading into uncharted waters my gut tells me won't go so well.
Perhaps this is all a case of me jumping the gun and being a little too dramatic too early on in the game here. I don't know. All I know is that in the last 24 hours I've learned there's a big difference between hearing for months that there's gonna be a lockout!, and that lockout actually happening.
But on the plus side, I'm finding that any disillusionment I may have with baseball doesn't trickle down to my cards, because I'm happy to report that I still have a good amount of stuff coming in from fellow who are willing to overlook my current plunge in blogging productivity.
Blogging forefather Greg of "Night Owl Cards" dropped a few cards in the mail for me a while ago, and as much as I enjoy randomness, I'm equally fond of people like him who take the time to go through my want lists and help me check off some numbers. 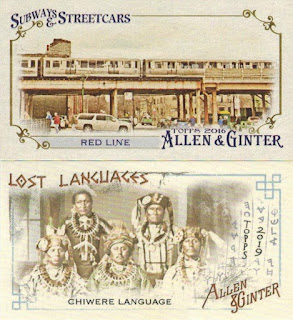 MLB disillusionment or not, I really should put more effort into tracking down these non-sport A&G minis.
(Sidebar: I've ridden the Red Line many times, and let's just say it's nowhere near as glamorous as it looks there.) 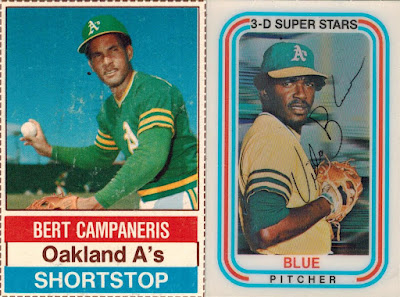 I already had these two, but they're both massive upgrades to the copies I had in my binders - I'm so used to having my Hostess & Kellogg's creased and cracked that flawless ones shock me a bit. 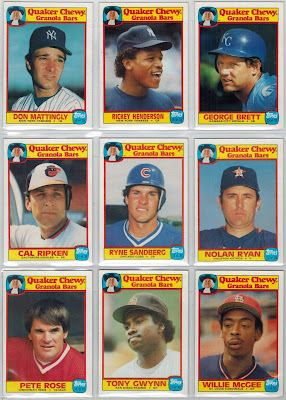 One reason I sometimes wish I grew up in the '80s is that it seems like every food you ate came with some kind of baseball card. 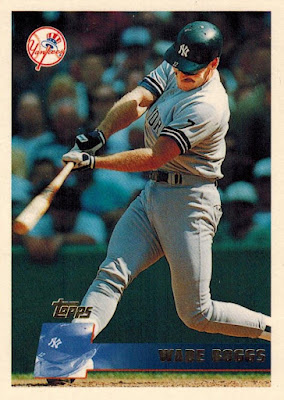 Longtime trading buddy Bo of "Baseball Cards Come to Life!" recently sent me some cards as well, including this '96 Topps Wade Boggs that was a former Dime Box Dozen suspect.
I think we can all agree that '96 Topps is miserable, but this was way too obvious of a card for me not to have. 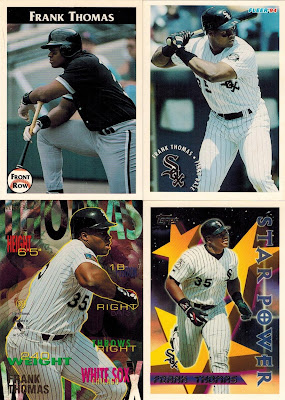 Bo sent me a nice helping of Big Hurts, which is most welcome because I'm trying to make up for all the time I wasted not chasing his cards. 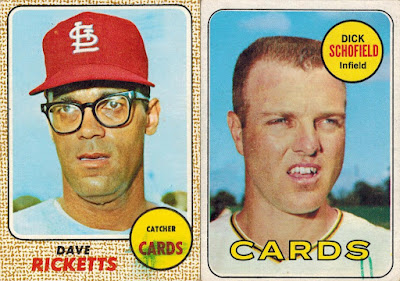 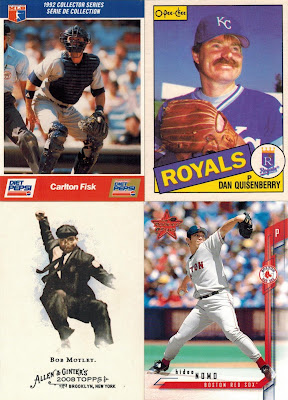 A quartet of excellent needs here from Bo - seems egregious that I didn't own that Bob Motley card long ago. 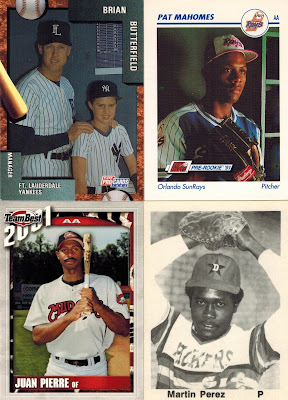 If you send me enough minor league cards, it won't take long for me to find something I like.

In the latest How Behind Am I With Trade Posts? barometer reading, I'm just now showing off the cards I got from Jeff when we met up at The National earlier this year.
Jeff hasn't been around the cardsphere much lately, but I'm honored that he remembered I collect Mookie Betts - love that '91 SC variation, and I admit I still get a tiny thrill out of serial-numbered cards. 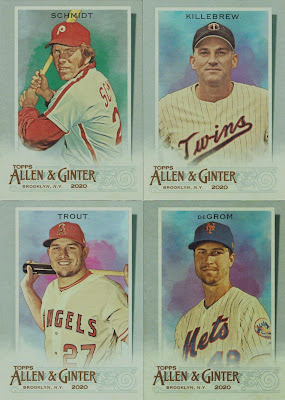 It's tough to tell from the scan, but these are those shiny A&G "hot box" parallels - I'd be disappointed if I got a whole box full of these, but they're fun to pick up here and there.

Jeff is one of the few fellow Panini Golden Age fanatics I know of, and a good side benefit of that is getting his extras! 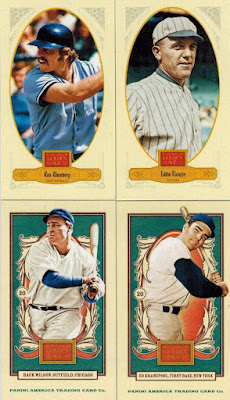 While Topps was busy making their 8,759th different Cal Ripken Jr. card, Panini was giving us cards of Ron Blomberg and Ed Kranepool(!), and making them minis too(!!!).

Golden Age inserts are always cool, so much so that I even get a kick (or a punch?) out of the non-baseball ones. 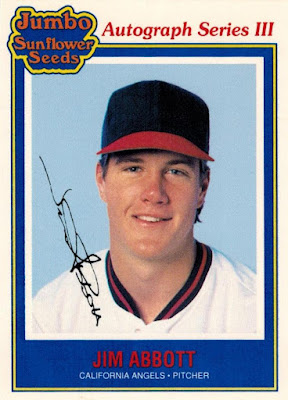 Living proof that there is no such thing as a bad Jim Abbott card - but darn if this one doesn't try (never been a big sunflower seed guy myself).
Collecting cards is a joy because I can embrace and ignore whatever I choose to. There's frustration and eye-rolling at some of Topps's tactics, sure, but it's never enough to really sour me on cards as a whole. I could put an embargo on collecting any cards printed from this day on and still have enough stuff to chase to last me a lifetime. That's part of the beauty - no disillusionment.
Alas, if could only say the same for baseball as a whole.
Posted by Nick at 6:10 PM

Baseball hasn't been "my baseball" for a long time, probably since the middle of the '90s, and I'm not as broken up about this because of that.

But also I've lived through the '81 strike and the '94 Series cancellation (I was even around for the '72 stoppage but too young to know). This doesn't seem as cranky as those. I could be wrong, but I think they'll get it straightened out in a couple months.

I definitely enjoy baseball cards more than baseball lately. Not the "new" sets where Topps recycles old designs again and again, but the overproduction-era cards I grew up with and oddballs like those Quaker cards I hadn't seen in years. Every time I think I'm done with the hobby it finds a way to pull me in again.

As for the lockout, MLB has a lot of issues to fix, but very few of them seem urgent enough to either side. I think N.O. is right, this thing might last a couple months, possibly into spring training, but I'd be surprised if it eats into the season.

Hey Nick,
Great post and I echo the "disillusioned" sentiment. I used to love baseball...then came 1994 and the overpaid, selfish and "entitled" dickhead players ruined it all out of greed. I did not watch, read about nor care about baseball from that point forward. Only my semi-recent foray into the card world has re-kindled any sort of interest...and it ain't much...the cards I love...just don't have a lot of respect for the modern players depicted on them.

Baseball was always been run by people who cared about dollars the most. Before the players' union, most offseason baseball news was about player contracts and who might hold out.

The coolness of these cards negate the pessimism... Motley,Golden Age discs.. and there's a card of the Red Line!!?

I don't follow current baseball happenings, but wouldn't think that this would go on for too long, as there's way too much money to be lost if it does.