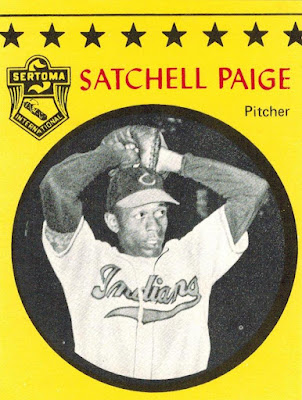 I haven't been spending much time with my cards lately.

Time has been somewhat of a reason for that: I just finished my first week at the new job. I'm obscenely happy for the full-time work but I've also been reminded of how exhausting a normal work week can be. Most of my off hours have been spent reading or sleeping instead of blogging and putting cards away. Over time I'm sure I'll adapt to the new schedule, but for now it's still a process.

But I think there's something more. Maybe it's the worrywart and/or curmudgeon in me, but I've been wondering more and more lately if the hobby is slipping away into high-end oblivion. People are raiding Walmart clearance bins for the sole hope of pulling a big rookie instead of simply enjoying the rare taste of discounted cards. My yearly tradition of buying a box of Topps Update has been nixed because hobby box preorder prices have just about doubled this year because ROOKIES.

If money talks, then I guess I don't have much of a voice. 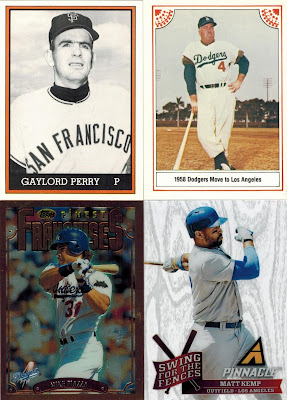 I feel like my blog in particular has been suffering as of late.

My frankenset posts have accounted for about half of my total output over the past year. They remain my biggest blogging thrill, and I love writing about them, but at the same time I don't want this blog to be a sole vehicle for frankenset pages. I also haven't done nearly as much reading, trading, or other blogging activities as I'd have liked here lately.

I've just kinda felt on the sidelines of it all. 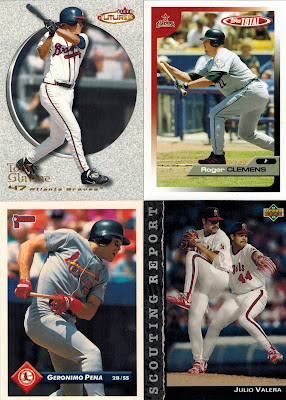 Part of the problem, I think, is that I constantly compare myself to the blogger I once was, posting every day of the week with a constant flow of new ideas.

That's just not feasible anymore. I don't see this blog ever going extinct (and you can take that to the bank), but I also know I'm not the high-energy, high-output blogger of the past. In times like these, it's often the readers who remind me of why I'm here -- people like Bob O., a reader and recent friend of the blog who's taken to shoveling cards on me as of late. I've lost count of how many packages I've gotten from him over the past year or so, but it has to be right around a dozen (and I do know I'm sorely behind in returning the favor).

In addition to a bunch of spectacular randoms and oddballs, I also think Bob's one of the few who checks my theme lists, because almost everything I get from him is new to me -- I certainly don't expect everyone to pore over my gigantic mini-collection lists, but it's nice when it happens. 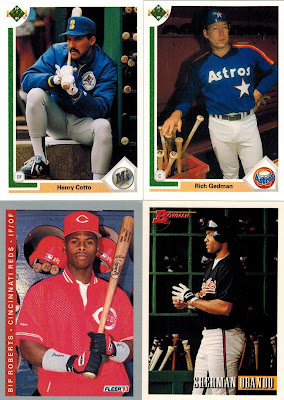 Looks like Bob's trying to convince me to start a new mini-collection too. 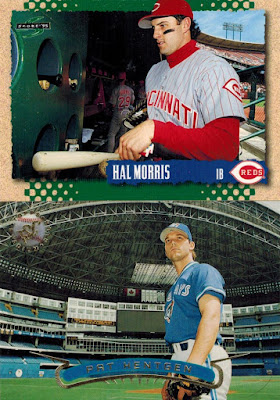 The Morris is another fine bat rack shot, but HOLY HELL is that Hentgen beautiful. 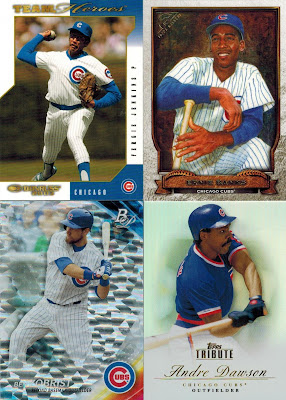 The Cubs may have been hot garbage this year, but these cards sure aren't! 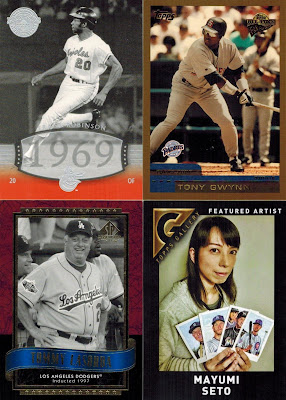 Whenever I get down about prospect insanity and blogging insecurity, it helps to write posts like these to remind me of all the random greatness I have yet to find in this hobby -- and the people out there who are willing to help me look for it. 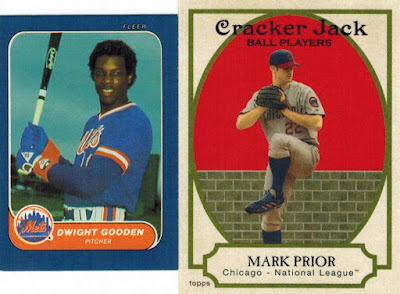 Minis, then and now. 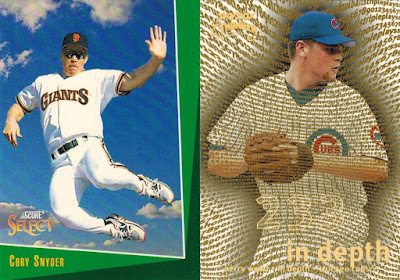 Superman Cory Snyder and a Kerry Wood insert so busy it almost made my computer explode. 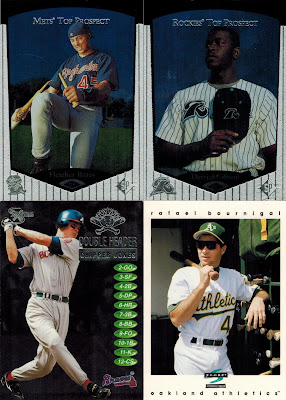 More excellent mini-collection hits, and yet another instance of Bob's (not-so) subconscious quest to get me to start collecting bat rack cards. 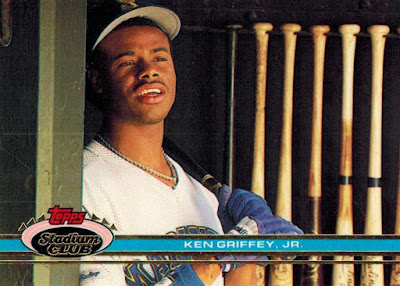 But maybe the bat rack stuff is all in my own subconscious, because I mean this card had been sitting on my Dime Box Dozen list for a good long while now.

Just a beautiful Griffey I somehow hadn't acquired yet, and one that took a whole lot longer to track down than I thought considering it came out in the heart of the overproduction era. Thankfully Bob came along to put it to bed, although now he has me thinking if a bat rack mini-collection isn't such a bad idea after all...

In the end, just the joy of knowing that someone's trying to get me to collect bat rack cards -- and me thinking long and hard about actually doing it -- is enough to convince me that, yes, the hobby is still alive and well here on the sidelines, despite everyone and everything trying to convince me otherwise.
Posted by Nick at 5:30 PM

Getting older sucks........No, not really. I was kidding. You'll figure it out in due time.

I agree with the high-end cards getting out of hand. I really feel there is another bubble burst coming with this hobby. But after the smoke clears, the collectors who collect just for fun will still be around.

I agree with Base Card Hero, and in the meantime the people who spend all that money trying to find hot rookies are more than welcome to sell me the non-hot-rookie Mets, stars, and such in their dime boxes!

That Hentgen shot really is sweet. That Junior card is a classic shot. Good stuff. You'll figure out your collecting/blogging rhythm. It's different for all of us at different times in our lives and there is no wrong way.

As other's have already said, another bubble is coming, I mean how can it not be. The speculators won't be around forever, and when they take off, things are going to get really messy, and lot of people are going to end up losing a lot of money -- but after all's said and done, true collector's will still be around, and will likely clean up on the leavings. Then in another ten or twenty years, we can do this all over again :)

A. Congratulations on surviving your first week at your new job!

B. I feel like if "rookies" are bringing new collectors into our hobby, then it's good for everyone. These collectors will focus on their "rookies" and sell everything else in hopefully their dime boxes. My only issue is that Topps is catering to these collectors to the point that every product is designed around rookie cards.