The card show is alive and well 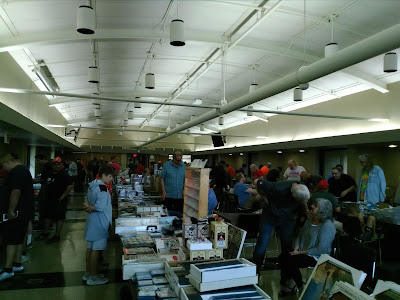 The card show I attended this past Sunday will forever be known as The One Where I Drove Through An Electrical Storm.

Seriously, it was darn near the worst weather I've ever driven in (I had to pull over at a gas station at one point), and as fate would have it, the hour-long drive carried me in the exact direction the storm was traveling. I felt like one of those weird storm chaser people on TV. Between this and the time my car broke down on my way to this same show, I started to think I'd done something to royally piss off the cardboard gods.

So, after an hour at the wheel, I stepped out of the car, high-tailed it through the parking lot, peeked inside the village hall, held my breath, and saw...YES -- the card show was alive and well! 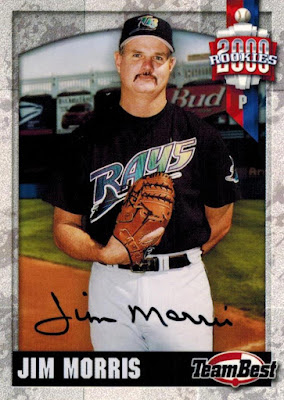 So I grabbed a couple paper towels the village hall had so thoughtfully set up by the entrance, wiped down my hands and arms, and promptly found what is easily one of my Top Five Dime Box Finds Ever.

I suppose I can't really prove this to you, but you'll have to believe me: I FOUND A JIM MORRIS AUTOGRAPH IN A DIME BOX. Jim Morris is a bit of a cult baseball star, in that he's the basis behind The Rookie, a prime baseball movie of my youth (and a darn good story). I suppose anyone who hasn't seen/known about the film would treat this as any other prospect bust. But still...I almost never see any autographs in dime boxes, much less guys I know, much less guys I collect, much less guys who've had a Hollywood movie made about them, much less...etc.

I usually try to save my best finds for the ends of these posts, but I don't care: this deserves the lead. 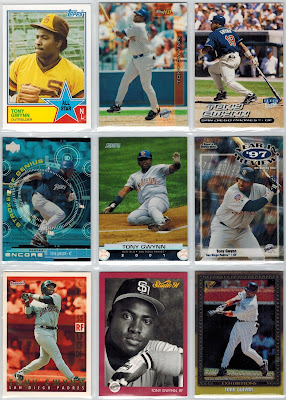 But I don't want to give the impression that the rest of the show was any kind of letdown after such a monumental dime box find -- anything but, because with Morris already in the bag I couldn't wait to see what else the show had up its sleeve.

Also in that first little corner of the village hall was a vendor with a table packed with nickel boxes that saw around 200 cards go into my purchase pile, a large fraction of which was made up of new and awesome Gwynns. 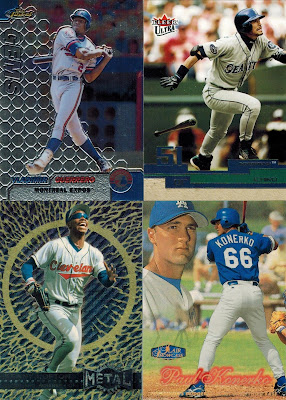 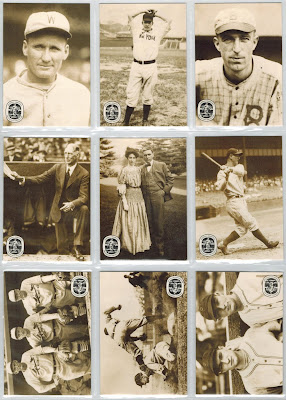 I also found a near-complete set of these '88 Conlons in those first nickel boxes, fresh with names like Cobb and Merkle and Gehrig...and even Charles Conlon himself in very Victorian garb in the center (pictured with his wife Margie). 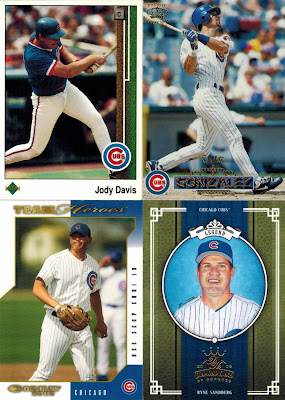 Monsoon aside, the only real complaint I had about Sunday's show was the lack of etiquette shown at various points throughout the day.

A different vendor had a nickel box full of Cubs, and while it takes a lot of sifting through '88 Donruss and '90 Score stuff, I enjoy stacks like these because they really give you a grand tour of the good (Jody Davis!), bad (Hee Seop Choi...), and ugly (Ghostly Ryno?) of team history. But three different times while I was at this table, someone came up, pushed past me, and absentmindedly shuffled through the very box I was looking through -- causing me to lose my place all three times.

I must've shown some frustration the third time, because the vendor not-so-kindly said to the oblivious dude: Sir, I think HE (me) was looking through those -- and I instantly wanted to be that vendor's best friend. 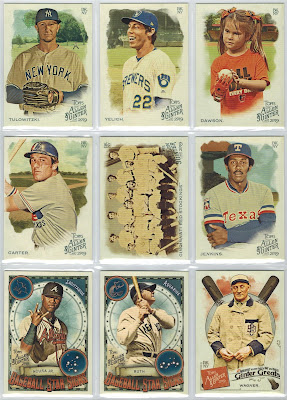 Other than that, the show was a smashing success, not the least of which because a THIRD nickel box(!) materialized right around the time the skies were clearing up outside.

This one, however, was packed with 2019 product from a cool vendor I'd never seen before -- I took care of a good 90 percent of my A&G base needs for nickels -- actually cheaper than that, because his stuff was priced at five cents per or 100 for $4(!!!). Got a bunch I'd been sorely wanting, including that Red Stockings one and a Tulo sunset card which will also go down in history as an ultimate Short Term Stop given the brevity (5 games) of his Yankees career. 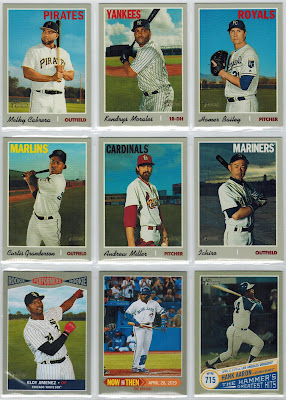 I wasn't sure anyone would have these because the set came out the same week of the show -- but I guess I shouldn't underestimate the turnaround times of my local vendors, because at least three of them were already flush with High Numbers.

Lots of dudes on new teams here, a sunset Ichiro SP (only $2), and the only Vlad Jr. card I bought all day (a big-dollar purchase at $3). 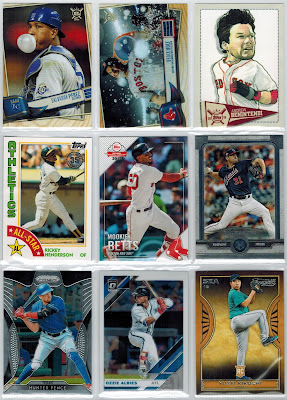 The local shows are where my want lists go to die. 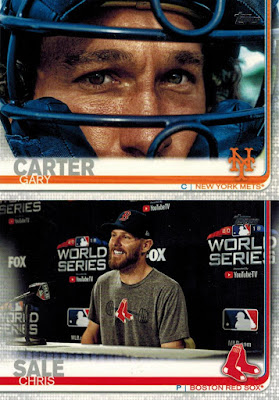 Couldn't help but bite on these Series 2 variations at $3 a piece -- the Sale is a mini-collection hit, and the Carter is...well, just an amazing baseball card. 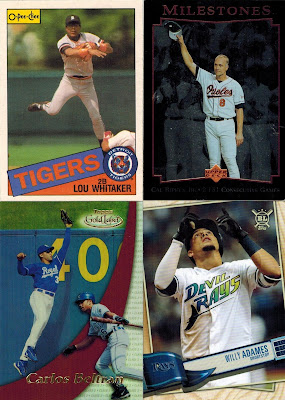 While 2019s ended up comprising the bulk of the day's nickel/dime box purchases, the randomness was also alive and well, as these mini-collection hits should show.

I feel old knowing that the Rays, of all teams, now have throwback jerseys. 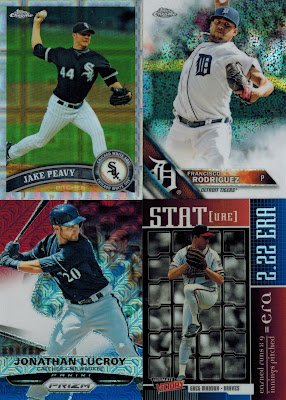 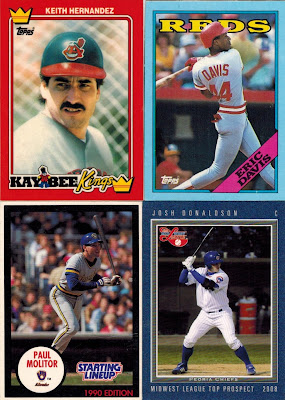 These excellent oddballs all came from that first nickel box of the day, including a Keith Hernandez Indians sighting I had no idea existed and a nifty (if not slightly painful) zero-year card of Josh Donaldson as a Cub. 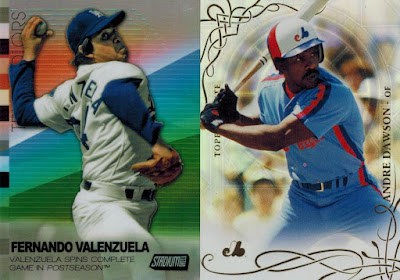 Didn't do much quarter box digging on Sunday, but what little I did paid dividends. 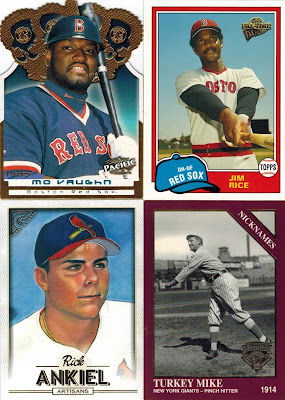 Time for some of my favorite cards to scan with each passing card show post: The Dime Box Finds That Just Didn't Fit Anywhere Else.

I found a substantial amount of Fan Favorites in one guy's dime box, and I don't know if I like knowing that Rick Ankiel  -- one of the most fascinating ballplayers of my youth/adolescence -- popped up as a "retired guy" in Topps Gallery a couple years ago. 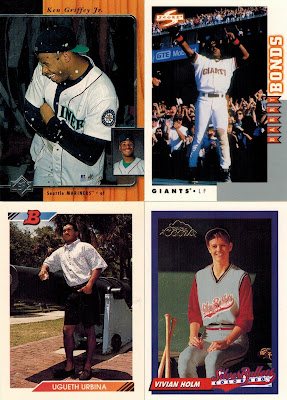 More stuff that didn't really go with anything else, including Ugueth Urbina leaning on a cannon and a history lesson with that Colorado Silver Bullets card -- apparently they were the first professional all-female team since the AAGPBL squads of the '40s.

Also, I try to make it a point not to buy (much less blog about) Barry Bonds cards, but I had to show that one because I have no idea what's going on there -- to me it looks like he's leading a stadium-wide dance competition. 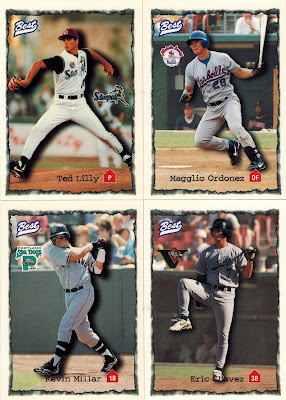 The last dime box of the day had a large offering of '90s minor league cards, which was fun because I knew a lot of the names in there. 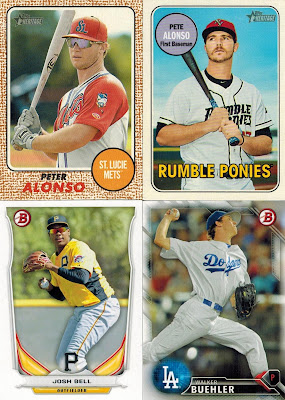 But the dime box before that one turned out to be one of the real coups of the day, because I found early cards of a few minor league guys that often become tough finds when said minor league guys become desired names -- including not one but two different Heritage Minors Pete Alonsos (which included the newfound knowledge that a minor league team called the Rumble Ponies is a thing).

Josh Bell in particular was a star of this particular dime box -- seriously, I found so many early Bowman/Pro Debut/etc. cards of him that I decided to start collecting the guy right then and there. 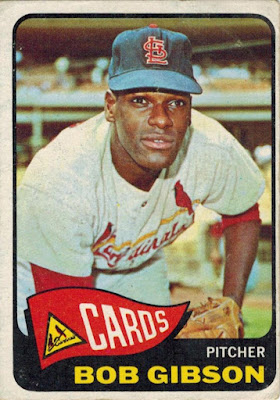 My vintage haul wasn't anything like the bounty I took home the last time I attended this show, but the cardboard gods were still with me on Sunday because I found a '65 Bob Gibson for five bucks. 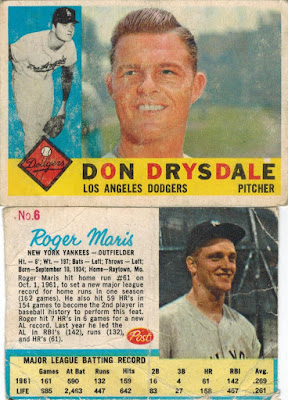 Also present was a '60 Drysdale for another $5 bill and a '62 Post Maris for three bucks.

It should be mentioned that the Maris sent me down another rabbit hole -- it's noticeably thinner than other Post cards because (as I discovered) it was actually given away as a promotion with Life magazine back in the day. 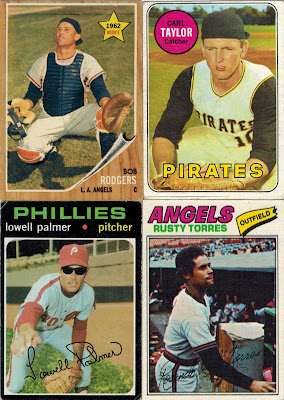 Discount bin frankenset vintage -- including the somewhat forgotten '71 Topps Second Coming of the Shades that I somehow didn't already own. 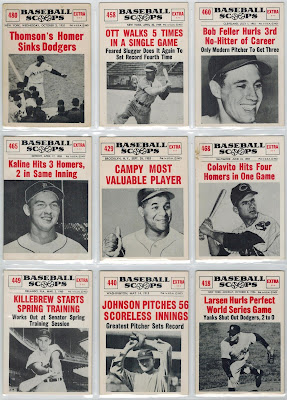 Sunday also saw me take home the single largest lot of '61 Nu-Scoops I've ever found in one sitting.

This is one of my all-time favorite oddball sets, and a vendor near the end of the show had a few pages full of these in an oddball binder -- the Campy was the big buy at $4 but none of the others set me back more than a buck or two (some as low as 50 cents!). 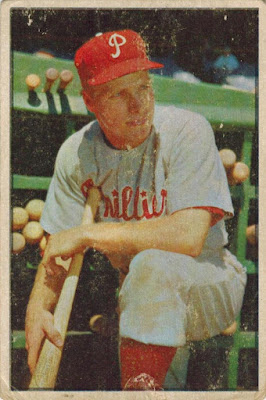 I'll close with this beautiful '53 Bowman Color Richie Ashburn -- easily my most expensive purchase of the day at a whopping eight bucks, but still a no-brainer buy.

The fact that the show had been packed all day, from rainstorm to sunshine, strikes me as a testament to the determination and joy of us collectors. And as the vendors packed up and the customers cleared out, I was left with the big bag of Sunday's spoils cradled in my arms. I pushed through the doors of the village hall and found the sun above and the sky a perfect blue, all traces of the morning's storm washed away.

I suppose there's something symbolic in that.
Posted by Nick at 6:07 PM

tremendous amount of great cardboard new & old. Great job. If you need to do something with those 88 conlons (and the red conlon) Turkey Mike, lmk.

Looks like a great haul. Happy you're finding some joy with my boy JB.

Great grabs all around. Looks like you had a lot of fun, weather aside.

Those are some great cards. You can't beat great cards in nickel boxes.

As someone who comes from the city that the Rumble Ponies call home, has been to Rumble Ponies games, and has mentioned them on my blog, I'm a bit miffed that the card was your first knowledge of them.

However, I feel a kinship after you told the story about the guy who butted in on your discount box sifting. I HATE THIS. And not just at card shows. Why is it that you can be in a department store with no one else in the aisle and then suddenly someone comes into the aisle and goes directly to what you are shopping and starts reaching in and around. I almost think they believe you found something good and they don't want to miss out. It's happened so many times -- in the grocery store, at thrift stores -- and it's WEIRD.

That Post R. Maris card is nice. I actually got some '62 Canadian Post cards. These cards have English and French literature on them. I never knew these versions existed.

It is great finding weirdo cards.

Kudos to the vendor for saying something to that guy. I can't stand it when people think it's okay to take over a box you're currently going through. If I see someone digging through a box, I'll ask them if they're done and if I can look through it.

Anyways... sweet find on the Morris auto. And I love that 1998 Score Bonds card. Don't think I've seen it before.

Your finds are always impressive but that Morris auto is probably the best thing here. Also Binghamton plays as the Spiedies when they do the MiLB food alternates.

If you wouldn't have to screen for heart ailments ahead of time, wouldn't it be nice to be able to carry a taser for people like that?

No better way to spend a crappy weather day than digging through boxes of singles. Well done!

Awesome finds, as usual! I want to re-watch The Rookie now...

The shows around here need to get some dime boxes, because days like this sound awesome.

Also the Rumble Ponies are a real thing, and they're spectacular.

This is amazing. I was going to comment on the Bazooka Red Hot, until I saw Rumble Ponies, Silver Bullets, and Jim Morris. What a gloriously obscure haul!