I think I've finally figured out why I always seem to exceed my budget when I make a card run at Target.

When I'm going there for something completely unrelated (pretzels, chips, etc.) I always tell myself not to even look at the card aisle. I usually walk out with cards. And when I say Okay, Nick: don't spend more than like $10-15 on cards this time -- like I did when I heard 2019 Archives was out -- I go over. True to form, I bought four Archives rack packs (in my favor, it's fiscally a way better deal than the blaster I originally planned on getting), lighting up the self-checkout lane with a number a bit over what I'd told myself just a few minutes earlier.

I think the problem lies in the fact that I try to constrain myself, and in an odd way I'm starting to think I'd spend less if I didn't set any kind of budget -- but for now, I'm ready to talk about those four rack packs of Archives. 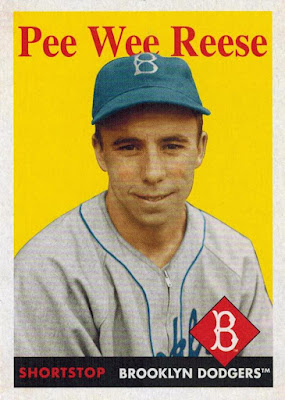 Selfishly, one of the reasons I like 2019 Archives is because the pack wrappers themselves are so thin I could easily see the first card through the wax (or whatever wrappers are made of these days).

Thus, I knew all four of the packs I bought had a card I needed batting leadoff -- like this excellent Pee Wee Reese in Pack #1. 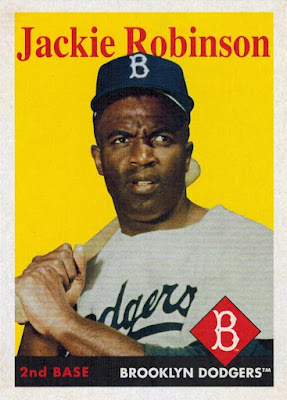 I couldn't, however, see the second card in there, so this Jackie Robinson (double Dodger legends!) was a joyous surprise. 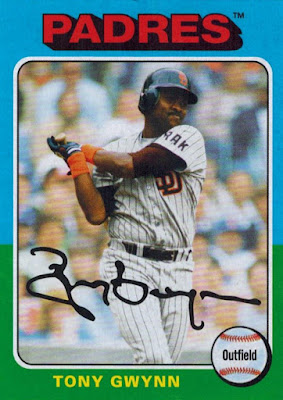 I've long been a fan of mixing legends and current stars in a product, but this pack did make me wonder if a set like Archives would be best served as an all-legend set -- I'll take Gwynns like this over Ryan Boruckis any day of the week. 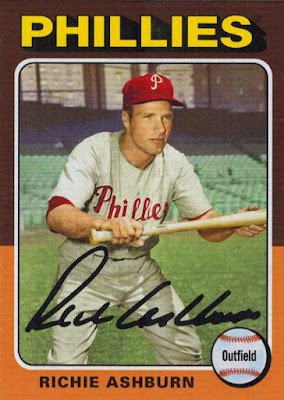 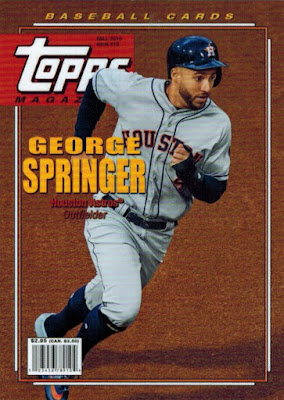 Oh man do I like these -- part of the reason I went with the rack packs over the blaster was because you're guaranteed a Topps Magazine insert in every pack.

I always like periodical-themed insert sets, and this one passes with flying colors: the little replicated bar code in the bottom corner is especially cool (although good luck finding any magazine for $2.95 these days). 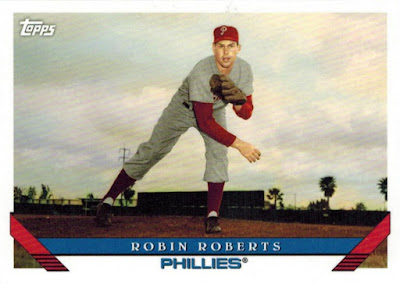 I was most looking forward to seeing what Topps would do with the '93s in this year's Archives -- while I was kinda disappointed on that front (more on that in a bit) this Robin Roberts is nothing short of magnificent. 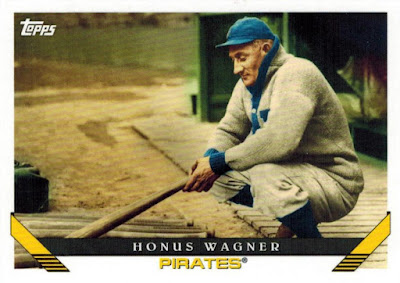 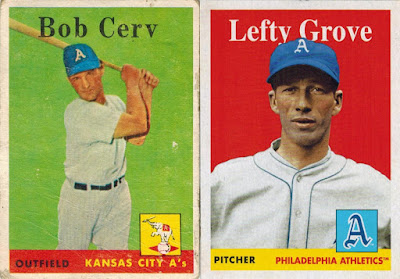 Lefty aside, this pack was painfully dull, so I thought I'd use it to make some comparisons.

The '58s are probably the most true to the original design -- the only real flaw I can see is that the photos on the '58s are backgrounded behind the name, while the 2019s overlap it (I prefer the former). 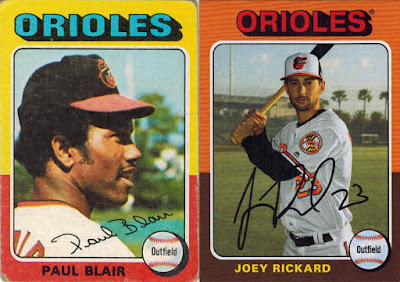 Thinking back, '75 is a good example of a design I like that Topps hasn't yet reprinted to death (ahem, '87).

But for some reason Topps has never seemed to replicate it exactly right -- the team and player names here are noticeably smaller than the originals, and while I'm no expert on them the color combos seem off to me. 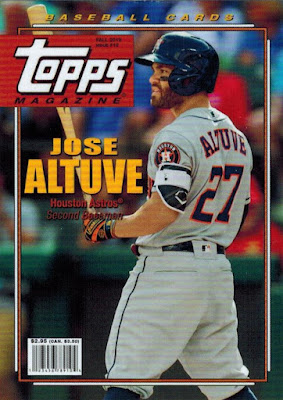 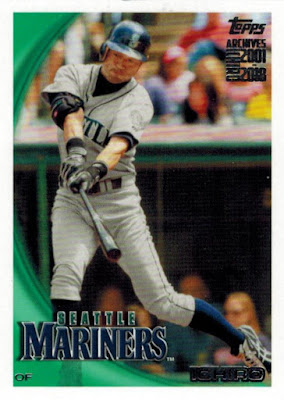 You won't find a bigger Ichiro fan than me, but even I think these inserts -- a series of reprints featuring Ichiro's entire Topps catalog -- are just about pointless. 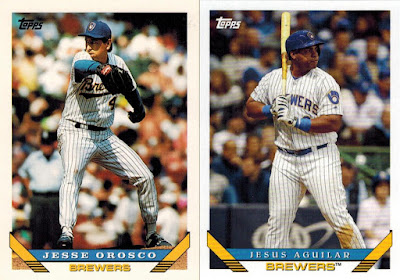 I was most looking forward to the '93s, and on the one hand I'm happy for any rehashing of the design since it's one of the more ignored in the Topps canon -- and one of my favorites of the '90s.

On the other hand, this is an awful representation of the original. I usually have to do side-by-side comparison to tell whether something is off or not, but I knew right away that the names on the 2019s were way too skinny in comparison to the '93s -- so much so that it's really jarring. The team names and colors aren't quite right, either.

So in the end I don't know how to feel about these: part of me is glad to see Topps give '93 its due, but still I can't help thinking about what could have been. 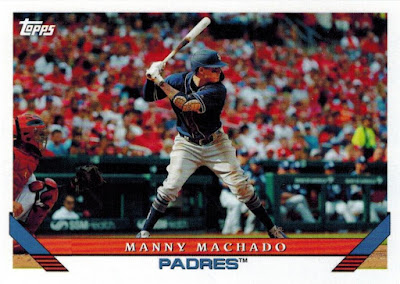 Oddly the first and last cards of this pack were by far the most interesting. 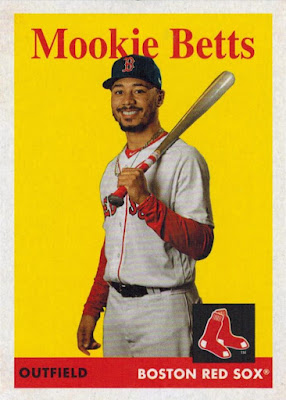 I knew this pack was coming home with me as soon as I saw the name "Mookie" through the wrapper. 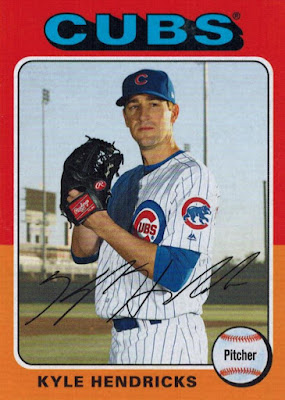 The only Cubs keeper of the lot. 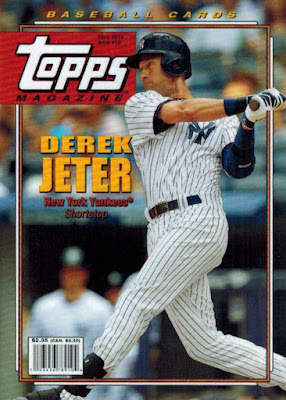 Yes, I'm gonna show all of these. 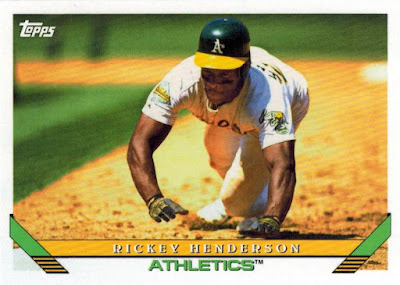 Add Rickey Henderson to the list of dudes who always seem to get great cards. 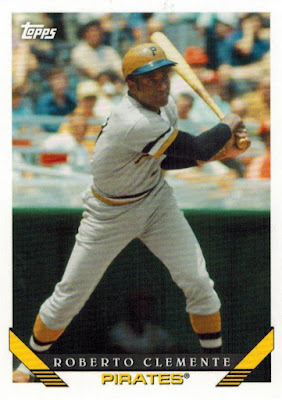 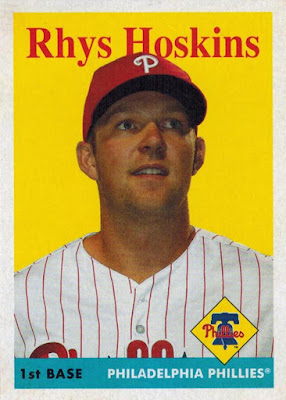 Rhys Hoskins is a recent add to my catalog of player collections, so seeing him through the wrapper supplied all the convincing I needed to buy this pack. 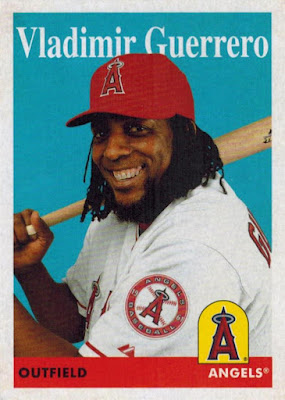 This is pretty much the image that comes to mind whenever I picture the legend that is Vladimir Guerrero. 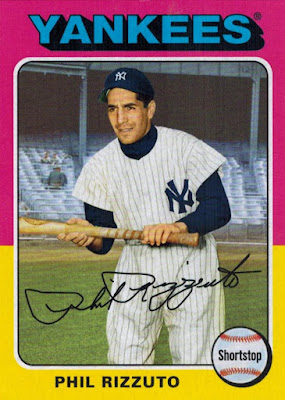 I'm also still trying to decide if I like the way Topps collates these packs -- unlike last year, I didn't pull a gluttony of doubles (actually none!), but similar to 2018, every pack bunches the cards in order of design.

You get the '58s, then the '75s, then the inserts and such, and then the '93s. In each and every pack. Part of why I love opening packs so much is the randomness of them, not knowing who or what you'll see at any given time. Archives loses some points there. But it is kinda visually appealing to see all the same designs bunched in a row, akin to a visual tour of the set.

The jury's still out on my feelings there, but there's no indecision as to the greatness of this '75-style Scooter. 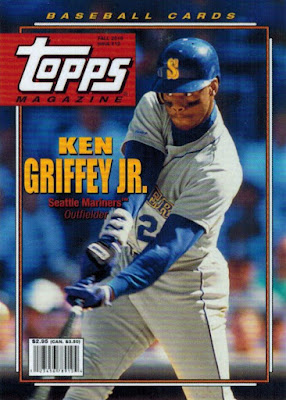 By far the best of the four magazine inserts. 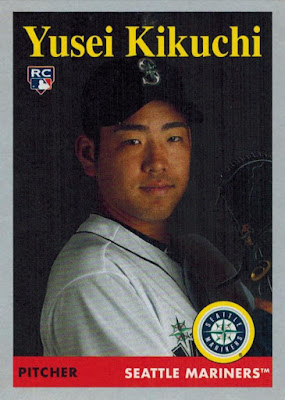 It wasn't long ago I was lamenting how I couldn't seem to pull a Yusei Kikuchi card to save my life -- now the dude seems to be stalking me. 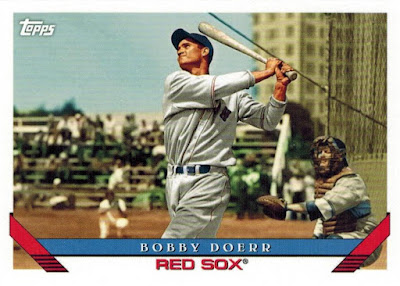 Quite possibly my favorite card of all four packs. 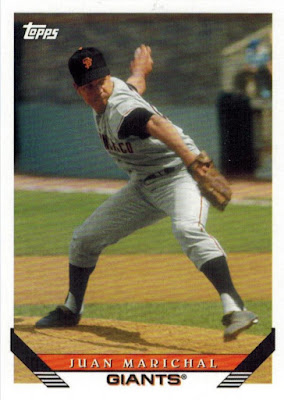 I guess I'll close with this magnificent image of Juan Marichal at his sidewinding best.

Archives was nearly my set of the year a few seasons ago (2016), but I don't think it's quite managed to match that greatness since. The concepts are there -- cool inserts, honoring sets I like (1975! 1993!), and just being a fun pack to open overall -- but I just feel like it could be so much more. More faith to the originals, more creativity in checklist selection (more cards of somewhat forgotten/ignored dudes like Lefty Grove would be ideal), more...effort.

I often wish Topps would run a sweepstakes and let the winner gain full control over a baseball card set of their choice -- and if I became that lucky soul, I'd probably choose Archives, just for all the potential it so obviously has.
Posted by Nick at 7:19 PM

I still haven't seen any Archives in the wild, but all the posts are making me jealous! Looks like a really fun pack to open.

"I've long been a fan of mixing legends and current stars in a product, but this pack did make me wonder if a set like Archives would be best served as an all-legend set -- I'll take Gwynns like this over Ryan Boruckis any day of the week."

I echo a lot of your thoughts from this post, particularly this one. I am a big fan of the 1992 Topps design and got a few packs of 2017 Archives simply due to its inclusion, but it felt very disconnected to have really cool inclusions Bob Feller and Honus Wagner come from the same pack as fringe prospects like Tyler Austin, Seth Lugo, and T.J. Rivera. It is hardly anything new, of course, for companies to shove younger guys into every set just in case one blows up out of the blue (I have a Juan Brito from UD World Series Heroes that always makes me laught), but, as you note this feels like a set that would be more fun if it included mostly notable guys on card history's varied designs.

To that end, I was momentarily excited to see Bob Cerv pop up in this post, as I would totally be down for having more semi-obscure, yet interesting older players pop up. Just as a straight team-for-team, position-for-position type of swap, I'd be far more enthused with a set that includes Gabby Hartnett, Dave Stieb, Bobby Bonds, and Paul Blair, rather than F.Arcia, Borucki, Duggar, and Rickard. On the point of the issues with replication of the 1993 design, I saw on another blog that several years of Yount's career were chopped off on his Archives card, which is so brutal. The Topps Magazine are indeed a super inspired choice, though, and they look great.

I like those Magazine inserts too. I had posted earlier my Braves Archives and that I needed that SP 329 Wright card. Want to trade?

Last night, I busted open my haul of blaster boxes and value packs of 2019 Chrome... and the results will keep me from going into the Target card aisle until next year. I've got to learn to just say "no".

Can't find any retail Archives in my area, but I'm heading to a show today and hope to score that sweet Hendricks from a dime box!

I've never thought about Archives becoming an all-legends set once again, but I don't think that's a bad idea. Topps can save their rookies for all the other products and come up with a dynamic all-retired player checklist for the Archives set.

The Pee Wee Reese and Jackie Robinson are sweet! I try to stick to flagship Topps Dodgers, but I may have to dip into some Archives.

We have Heritage to show us what current players would look like in cards from the past, why can't archives just be legends in sets after their retirement.