Worst of the worst 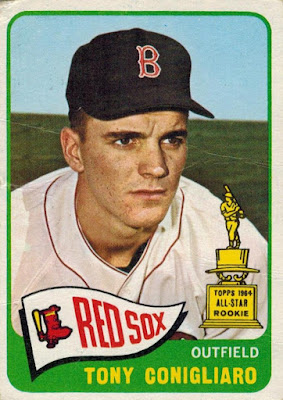 I'm not sure if it's a weird quirk in my personality or maybe the simple curmudgeon in me (perhaps both), but I tend to bond better with people over common dislikes more than likes.

I enjoy asking people about the worst movies they've ever seen, the worst books they've ever read. I'll initially get a confused stare, but it's usually followed by lengthy, genuine thought. In a world brimming with "Best Of" lists, I don't think people ever really stop and consider the worst of the worst. But I find the topic fun.

And I'm as guilty as anyone else of focusing on greatness rather than the obscure: I've said that 1965 Topps is my favorite Topps set ever about a million times on this blog, but when have I ever discussed the worst of the Topps canon? 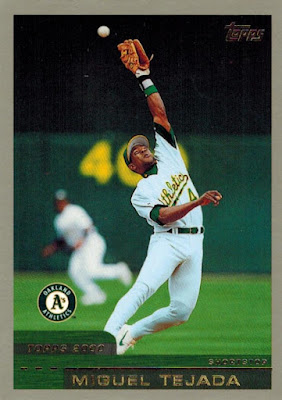 When I did my Topps countdown a few years ago, 1999 Topps brought up the rear.

I've reconsidered that as of this writing: '99 Topps is pretty darn bad, but I'm now of the opinion that 2000 Topps is even worse -- the worst ever, in fact. At least '99 had a couple nice cards. I can honestly say there's nothing memorable about 2000 Topps. Not the photos, not the borders (I'm not even sure what you'd call that color), and certainly not the foil-crazy failure of a design. 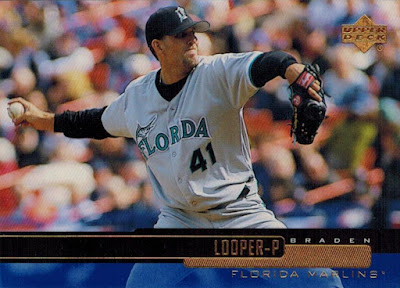 It seems as though Topps and Upper Deck teamed up to present a miserable year to us collectors in 2000, because that year's UD design is also my least favorite in their catalog (an opinion which hasn't changed in the year or two since I did my UD countdown).

I suppose it's not so much that I hate the looks of these cards, it's just that I feel absolutely nothing when I see them. 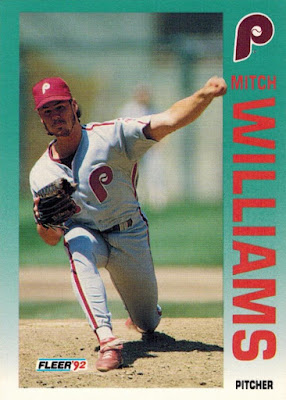 Sadly, my birth year wasn't exactly a goldmine for cardboard -- 1992 Fleer is far and away my least favorite of their offerings.

I almost audibly groan when I see these cards. Something about the sidelong nameplates and the closing elevator door I can't help but notice in the design plays with my sense of what is good and right about a proper baseball card. I can at least applaud the effort of an off-kilter green border, but that doesn't quite work for me either.

It's like claustrophobia manifested itself into a card design. 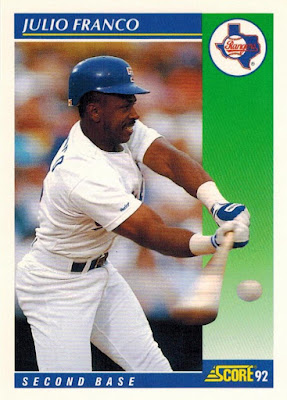 My birth year once again makes an appearance on this list -- 1992 brings up the rear in Score's decade-long stint in the card market.

All things considered, though, Score probably has the best of the worst (if that makes any sense). I don't really think there is a bad Score design -- a good amount of decent, some mediocre, and occasional greatness, yes -- but I certainly don't hate anything they produced. I think 1992 wound up being my least favorite because, like '92 Fleer, it just kinda makes everything feel squeezed in.

As I've written this post I've realized that I can live with wacky LSD colors and strange font tweaks, but the one thing I won't stand for is a design being intrusive -- thus, my feelings about '92 Fleer & Score. 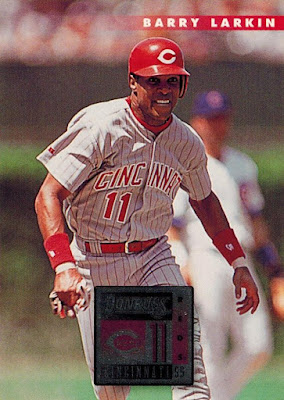 Even otherwise nice cards are rendered dull by those awful nameplates, which are tough to read in-hand and downright poisonous to scanners -- not to mention they make it seem like every guy in this set is about to collide with an ill-placed chunk of foil. 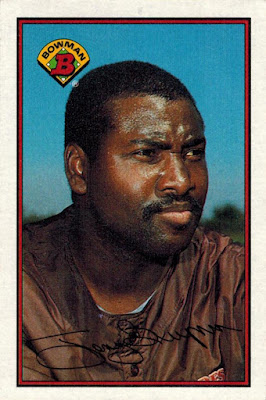 A lot of this probably has to do with my affinity for binder storage -- both literally and figuratively, '89 Bowmans stick out like sore thumbs (and I'm not about to buy eight-pocket pages just to appease this dumpster fire of a set). But aside from the look-how-retro-we-are attempt by Topps to revive the olden days of Bowman, this design is just, well...nothing. It's barely a baseball card to me. I'll just say this: 1989 Bowman managed to make Tony Gwynn look bad, which I always thought was impossible.

If that doesn't make it the worst of the worst, I don't know what will.
Posted by Nick at 5:59 PM

I actually like the 2000 Upper Deck. And, I couldn't agree more with you on the 89 Bowman, WTF were they thinking.

I'm with you on 1989 Bowman. For me its not so much the design (simple is good for me) but the horrible photography on most of the cards - just boring posed shots taken in spring training like that Gwynn card (or Griffey's rookie card). The 1990 and 1991 Bowmans were just as bad in that regard.

Ugh... '89 Bowman.
If you were to do a bracket of worst sets ever it would at the very least make the final four. It's definitely a #1 seed.
I'm a little surprised '91 Fleer didn't make your list. Many seem to either love or hate those yellow borders.

I think you should run with P-town Tom's idea of a bracket of worst sets ever. That would be a fun read, for sure.

I know I'm the rare 2000 Topps defender, and I recognize a lot of that is due to nostalgia, but the pictures aren't THAT bad. I get a lot more variety (i.e. not just batters batting and pitchers pitching closeup) leafing through my 2000 Topps than I do leafing through some of the 2012-2014 sets.

And I'm one of the few who thinks that '65 Topps isn't that great, it's only slightly better looking than '66, which I consider to be the ugliest of Topps pre-70's sets (there's some really ugly 70's sets too).

I don't mind the 89B set... but I also accept the fact that I'm in the minority. It's like the 91F set. A lot of people despise that set too. Not me. I've really grown to like it. I like this conversation though. Not sure what set design would end up being my worst of the worst.

Those Fleer '92 are on really thin stock,too,right?...thin card stock makes em even worse...but I agree,the Bowman is the worst!

I actually like the 92 Score they have a 90's feel and I like the breaking the fourth wall effect of the borders. I will say the rest of the list is spot on. Those 98-01 Topps sets were bleh.