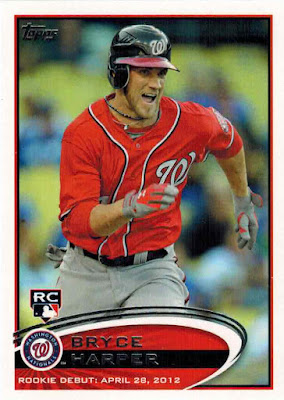 A few weeks ago, I finally experienced a collecting rite of passage: I undertook a mass reorganization of my doubles.

Like any project of the sort, it was quite tedious and took almost an entire night. Most of it consisted of me taking many of my dupes -- which were scattered across a number of smaller boxes in my room -- and condensing them into a couple larger boxes. It also involved freeing up space in those larger boxes by picking some cards to go to Goodwill. Sounds fun, huh?

But I'm here to tell you that, for all their dullness, mass organizations are worth it. Not just for the reduction in clutter, but for the fact that you might actually find some cards you need which were mistakenly cast off as dupes (which did indeed happen to me) or even a couple things you might be able to turn into cards you need.

As was the case with this Bryce Harper rookie, which had been sitting in a white box in a dark corner of my room ever since I pulled an extra copy of it six years ago. Knowing full well about the odd and extreme uptick in rookie card values lately, I decided to check and see what the Harper was commanding...and I was shocked to discover that copies were selling for upwards of thirty dollars.

Even then I thought it was some kind of ruse, but I listed mine on Ebay with a $29.99 BIN, figuring it'd sit on the auction block for a few days -- only to find that my copy had sold in under an hour. 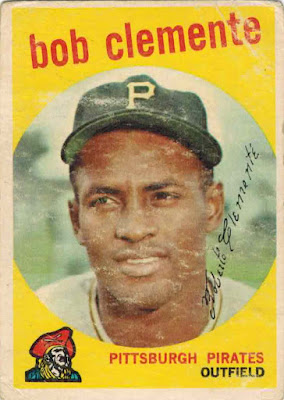 And so there was a good $25 (after shipping and fees) sitting in my bank account that would've never been there without a closer look at my dupes.

So what'd I do with it? I went out and bought a '59 Clemente, that's what. Few sets receive more universal applause than '59 Topps (rightfully so), and the opportunity to add a tough card of my all-time favorite ballplayer was just too good to pass up (and with a few bucks to spare!), especially when you consider it came at the cost of something that'd been collecting dust in my room since 2012.

Before this, I'd only watched the skyrocketing prices of basic Topps rookie cards from afar. It still boggles my mind that Trout and Kershaw Topps rookies -- no less common than any other cards in those sets -- go for triple-digit figures.

And then, out of nowhere, here was my opportunity to cash in on the craze, and I did my best to make it count. 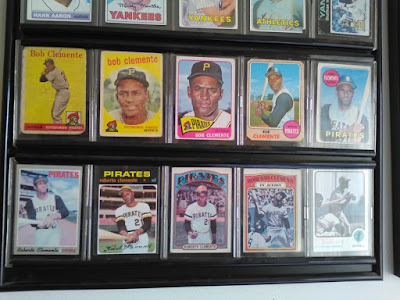 And as if all that wasn't enough, the '59 Clemente represented a watershed moment in my collection: it marked the completion of two rows of Clementes on The Wall above my bed.

Initially, I thought my quest to own every Topps Clemente would be close to impossible. But here I am about halfway there with a '58, '59, '65, and a complete run from 1968-73 (though I do admittedly have a lot of toughies to go). Maybe it's not so absurd after all, and I'm happy this strange rookie card craze helped me check a big one off the list.

But no, I still don't believe I basically just traded a Bryce Harper rookie (a double, remember) for a '59 Roberto Clemente -- that seems like something that would only exist in a dystopian world.
Posted by Nick at 6:02 PM

That was a great trade!

I listed a whole bunch of Walmart blue border parallels from a couple of years ago and didn't realize what I had in a Paul Goldschmidt rookie. Think it just fell shy of triple digits.

Just think of what is sitting in all those stored boxes of cards at my house in Ocala. Guys not in my PC, usually go there. I was shocked at some of the pricing on junk wax ROOKIES. It's a craze alright, crazy. Congrats all around, for clearing clutter, finding a gem, capitalizing on such clutter, finding a new gem. It's all good, cardboard at it's best.

You said you dont want to hear me dump on Harper anymore...so all i'll say is nice exchange!

I'd say that was a nice "trade". Congrats on the vintage!

I've seen upticks in Heritage rookies as well. I saw a regular Gregory Polanco rookie auto sell for over $100 the other day. That card should be about $10.

I'm in the process of doing something similar. Not quite to the boxes that could yield the Trout/Harper's though. Love the Clemente! That was a solid exchange.

Da Hawpa is great, and I'm glad he's on my hometown team (so far), but he'll never compete with Clemente in the minds of most collectors over 30. You're definitely on the right side of that exchange.

If I have my own copy of these modern rookies, I would make trades with the extras for vintage heroes like that all week long and twice on Sunday!

Congratulations on turning an extra Harper into a vintage Clemente. You're a genius. I need to totally do this. As soon as I can catch my breath I'll sit down and organize my stuff.

Congrats on the Clemente! Nice run you got going there.

Amazing trade, congrats! I would make that deal 10 out of 10 times.

absolutely a great trade up. Harper is fun to watch but won't leave the legacy Clemente did. I keep a rookie box too. every couple of years I go thru it, kicking a few guys to the road.