Blog Bat Around: The all-autograph team

Now here's something I never thought would see the light of day on this blog: a post feautring all autographs!

It's no secret that I'm long since removed from my days of hunting down autograph and/or game-used cards (my blog is called "Dime Boxes," after all). But this recent Blog Bat Around topic from Mr. Zappy of "Torren' Up Cards" fame is a fun one: creating a team out of the best autographs I own. I'm all for making fantasy rosters out of baseball cards, so I decided to bite with today's post (with some slight tweaks of the roster specifications).

So this afternoon, I dusted the cobwebs of my memorabilia-card binder and selected what currently stands as the slightly oxymoronic Dime Boxes All-Autograph Team. 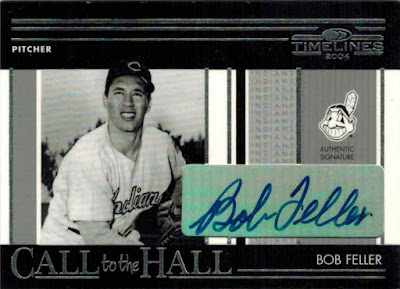 We start with a certified autograph of Bob Feller, one of the greatest pitchers in baseball history.

I'm actually not sure where I got this one (I seem to remember it being an Ebay purchase way back in the day) -- but it's still a special part of my autograph collection, even more so considering that Feller passed away in 2010. 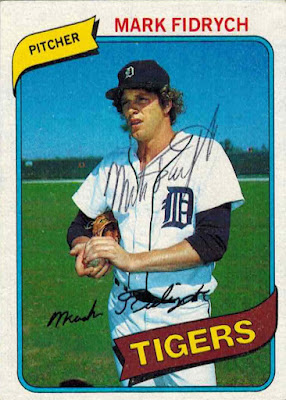 I actually met Mark Fidrych at a card show as a kid, but I had him sign a baseball, not this card.

No, my dad actually picked this one up on the cheap years after we'd both met Fidrych (Dad had him sign the issue of Rolling Stone with Fidrych on the cover), and it makes me infinitely proud to say I own both an autographed card and an autographed ball of The Bird. 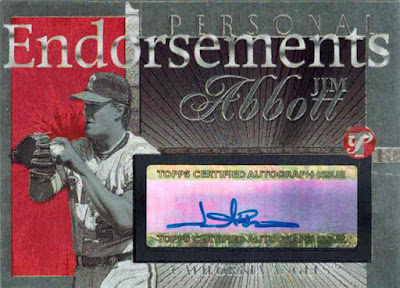 Jim Abbott is one of my heroes (and I don't use that term loosely), so having an autograph of his in my binders remains a certified pleasure. 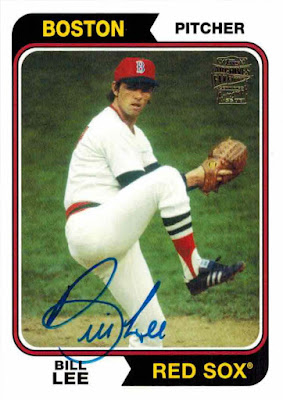 One of the reasons I stopped collecting auto/game-used cards is the plain fact that many of them just aren't very visually appealing.

That can't be said for these Fan Favorites autographs, however -- they're absolutely stunning, and I'm honored to own this beauty of The Spaceman himself, Bill lee. 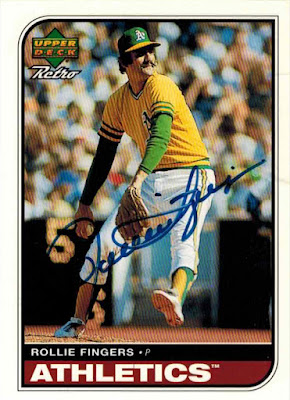 One of the first autographs I acquired at the dawn of my misguided memorabilia-crazed days, but also one of the few that I still ooh and ahh over from that era of my collecting life. 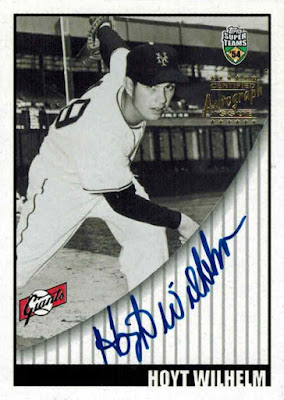 Of course Hoyt -- a man who enjoyed success as both a starter and a reliever during his long career -- needs to have a place on this roster! 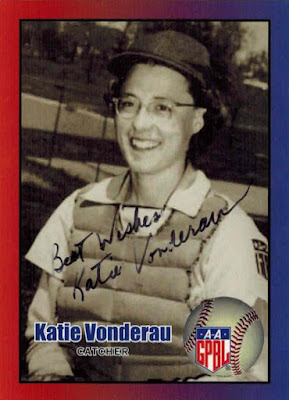 I still rank the All-American Girls' League autographs I received from a reader during the earlier days of this blog as one of the all-time great surprises anyone has ever sent me.

That wonderful lot included this one of Katie Vonderau, an All-Star catcher who played eight seasons in the AAGPBL and a woman who's still kicking today at the age of 90. 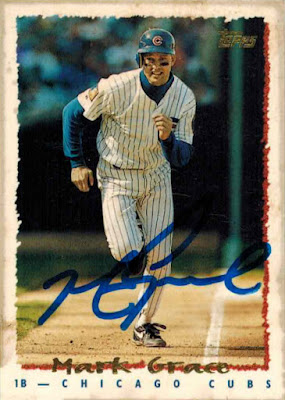 I've personally never experimented with the whole TTM craze, and I've never had much regret about that -- it just isn't my thing.

I have, however, reaped the benefit of other TTM aficionados, such as this one of Mark Grace (my mom's favorite player!) which I received as part of a blog trade a while back. 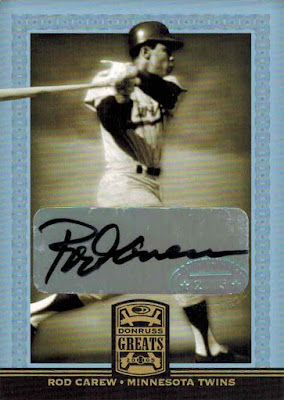 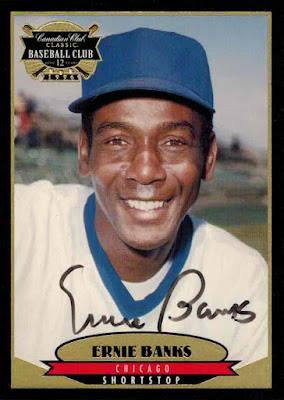 Not much competition here. 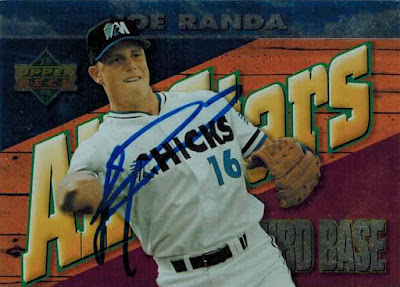 Easily the weakest spot on this roster, but significant in that it's one of the extreme few autograph cards I've ever found in a dime box (no, really). 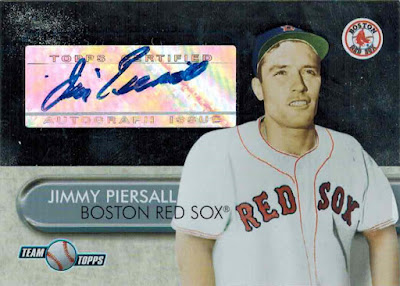 Still one of the best certified autos in my collection, and a reminder that my adolescent self had at least some good sense when deciding which autographs to spend my money on. 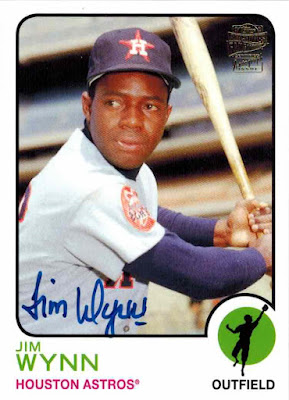 I had to find a way to sneak this card into my roster, because like Bill Lee before him, this Fan Favorites autograph of The Toy Cannon is just magnificent. 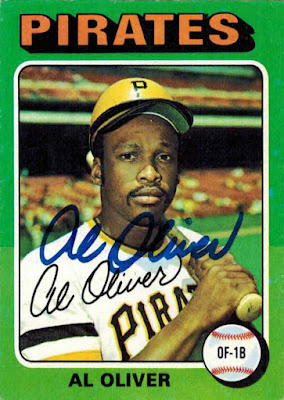 In what I still consider to be one of the greatest days of my life, I met Al Oliver and Bill Lee at the same card show about a decade ago.

I had Al sign my copy of his '75 Topps card, and I vividly remember him regaling the line of people before him with tales of Willie Stargell and Roberto Clemente. 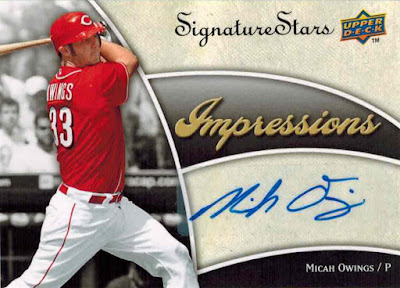 Owings could've pre-Ohtanied Ohtani if only he'd been a little better on the mound -- his career ERA was 4.86, but he did hit .283 with nine homers in just six big-league seasons, which makes him a useful man to have on the bench for this squad. 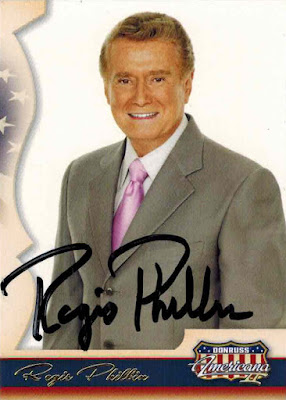 Because every team needs a celebrity fan, right? 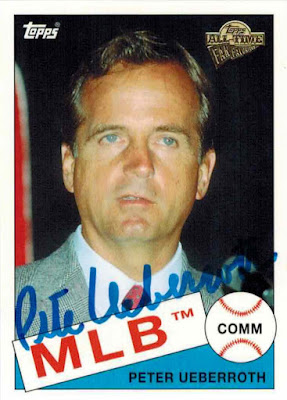 Should our all-autograph teams ever take the field and play against one another, might I suggest Pete Ueberroth as the commissioner for our little league (given his days of owner collusion are over)?

And so there's the Dime Boxes All-Autograph team -- all that's left is to fill out the Opening Day lineup card (season tickets are in the mail, Regis).
Posted by Nick at 5:34 PM

Glad to see you join the party Nick, very nice to see some of these gems in your collection.

Awesome that you have the Spaceman, The Bird, and Jim Abbott to join Hoyt in your rotation. Great autos!

is that wynn a reverse negative? i am guessing so.

also, that rollie fingers card is a beaut! looks like it's from the 1974 world series, and i think i need to find a copy for my dodger stadium collection!

Probably the most famous fan of the Pirates right now is Michael Keaton....Don't think he has a certified auto. Maybe I need to get a Wiz Khalifa auto.

You have quite the team. I remember several NL Central pitchers that would kill the Pirates with the bat. Owings, Zambrano and Gallard come to mind.

Lots of first in this post. Very cool that you included Vonderau, Regis, and Ueberroth.

Meant to comment earlier, fantastic team Nick. Love that you've got Fidrych in your rotation!

Great stuff! One of the most out of the box line ups I've seen.

Great group of autos there, you've got a little bit of everything in your lineup. It's really neat that you have a dime box find and a female catcher in particular.

While the novelty of autograph cards may have lost some of it luster, it's nice to see you can appreciate a quality rectangular cardboard icon enhanced by a sweet signature.