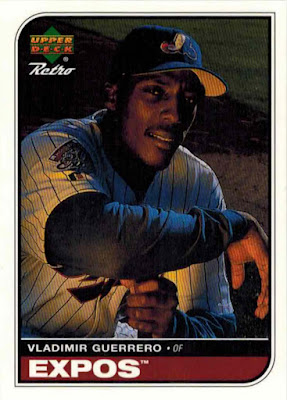 I've been waiting my entire adult life to say the words I'm about to say, so here goes nothing: VLADIMIR GUERRERO IS A HALL OF FAMER!

It's hard to explain what I felt when I received the news that Vlad (along with other well-deserving greats in Chipper Jones, Trevor Hoffman, and Jim Thome) would be enshrined in Cooperstown this year. I mean, the guy's my favorite player of my baseball lifetime, and now he's in the Hall of Fame -- how do you even begin to put that into words?

I suppose I could start with my cards, because it seems like I've been collecting Vlad my entire life. As of this writing, I own 986 different Vlads, far and away the most of any single player in my binders. With a number like that, you can only imagine how difficult it was to narrow down my five favorites, because, after all, that's about a half-of-a-percent of everything I have.

But somehow I did it, and here's my Top Five favorites of the Hall of Famer himself, Vladimir Guerrero. 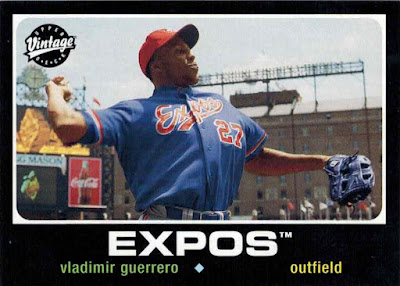 Any player would look stunning in front of the industrial backdrop of Camden Yards, but it seems to suit Vlad especially. 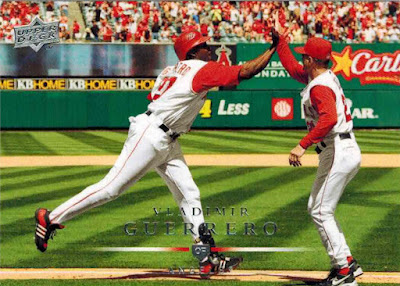 I will say that I'm a bit disappointed that Vlad is going into the Hall of Fame as an Angel.

Don't get me wrong: Vlad spent six terrific seasons in Anaheim (including an MVP award in 2004), and he'll receive the great honor of becoming the first player to be wearing an Angels cap on his HOF plaque. And this, one of his finest cards, features him in the full red-and-white glory of his Angels years.

But Vlad, to me, is first and foremost a Montreal Expo, and Cooperstown needs all the Expos it can get at this point. 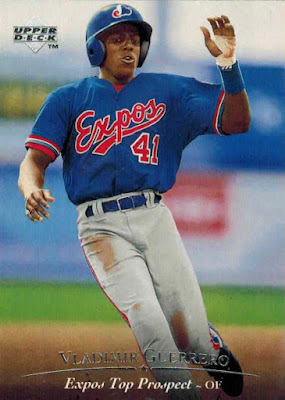 This is one of those rare cards that instantly transports me to a specific time and place: it takes me back to a wet and otherwise uninspiring afternoon at the flea market many years ago.

Nothing much was happening that day in the way of cards until the very last aisle, when I stumbled across a seemingly innocent nickel box. And then, WHAM, this precious Vlad fell out of it, one of his earliest cardboard sightings, and the first big card I added to what was then still a fairly modest collection of his. And for a nickel!

That had to have been about a decade ago, and while I've acquired several hundred more Vlads in the interim, this one remains a special treasure for the memory alone. 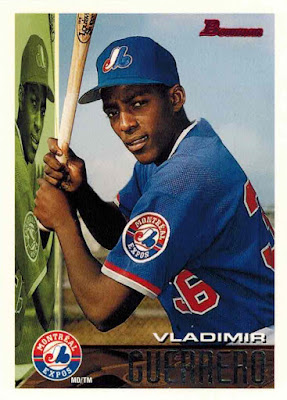 Best I can tell, Vlad has only two true rookie cards to his name, and for a long time I thought my collection would have to make due without either of them.

The first continues to elude me, and the one you see above probably would've suffered the same fate had a Cardboard God named Wes not stepped in and gifted me Vlad's 1995 Bowman rookie out of the blue a few years back.

Proof that blogger generosity knows no bounds, because I seriously doubt I'd own this card today without the help of Wes's kind soul. 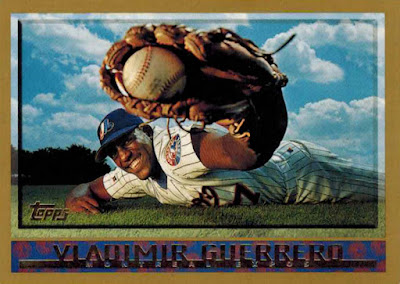 When I picture Vladimir Guerrero, this is the image that comes to mind, and it's is a bit jarring since '98 Topps has long been one of my least-favorite Topps sets.

But the Expos pinstripes, the clouds at his back, the wide smile: everything here is Vlad to a T -- simply a gregarious man willing to have a little daytime fun with a Topps photographer. And I, for one, can't wait to see the man behind that contagious grin earn his rightful place in Cooperstown this summer.

I completely agree with the number one card - one I'm still seeking out for my FUN card binder pages. As we move forward in time, the chances for members of the Expos to make the HOF are dwindling. Fortunately Raines got the call. I think Colon is the last active player in the game today.

I can't believe I haven't scanned that 98 Topps before, which means I need 3 of them I guess. Great choice in a #1 pick.

first time i've clicked one of these known exactly what the #1 card was gonna be. Can't say I'm at all disappointed.

Vlad was the last chance for an Expo to go into the hall.

I have to say that I am equally shocked that Vlad is going into the Hall as an Angel. However, judging by how terrific he was with the Expos, he will most likely be remembered by the fans as an Expos legend along with Dawson, Carter, and Raines.

That 1998 Topps card is awesome! Love the clouds in the sky.

Great cards! I am partial to his 1998 upper deck card myself. I'm trying to organize my vladdy collection this winter but it is slow going.

Your number 1 and mine would both be the same, however, I pulled a 1995 Bowman's Best Refractor from a pack in the winter of 1995... For whatever reason, the local card store had discounted a bunch of 95 BB packs to $1.99 each. I bought them all...

And Vlad needs to be an Expos in the Hall!

One of my faves is this Fleer 98 w/Sports Illustrated in the top left corner.
Running Hard from 3rd against the Orioles.
On The Expos