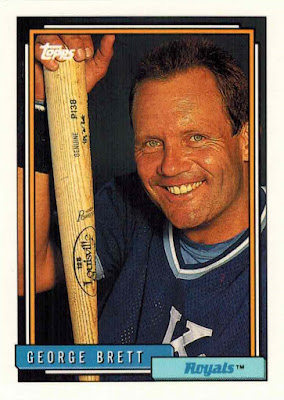 By the time this post goes up, I'll either be at or returning from my first card show of 2018 (wish me luck!).

Whenever Card Show Day comes around, I start thinking about where I'd be without shows. In addition to simply giving me specific afternoons to look forward to on the calendar (which are especially treasured in the winter months), card shows are where my collection forms and takes shape before my very eyes.

It was largely thanks to card shows that I realized I was omitting adding '80s and '90s stars to my binders. I started to see more and more Tony Gwynns, Ryne Sandbergs, etc. in dime boxes before it finally hit me a couple years ago: Hold on, why am I not collecting these guys?

My collection of George Brett, for instance, has more than tripled since I came to this realization, and as a result there's no shortage of material to choose from for this week's Top Five. 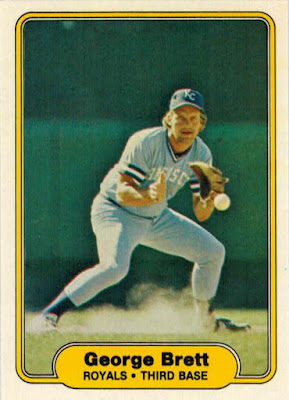 It's always a treat to see the game's greatest hitters flashing the leather on their cards. 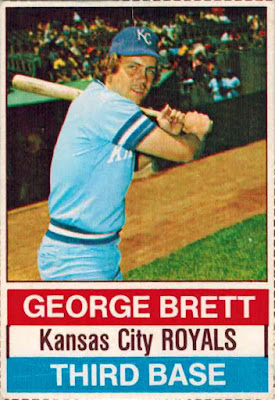 I can't tell you exactly why, but George Brett and Hostess just seem to mesh perfectly in my mind -- he's one of the few guys whose Hostess cards appeal more to me than his Kellogg's.

The '76 Hostess design is my favorite of the bunch, and thus this one gets the nod for inclusion in the Top Five. 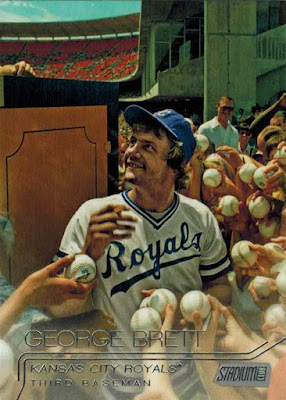 An iconic "autograph" shot of Brett, and one that inspired a chart-topping song a few years back (though not a tune I particularly liked). 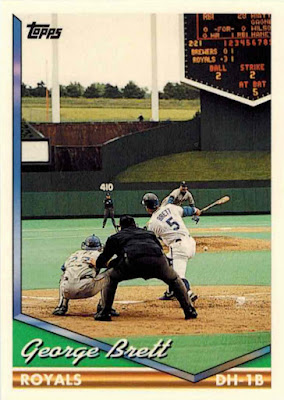 This might be my favorite card of the '90s -- I don't think I need to explain why -- and for just about any other player, it'd top this countdown. 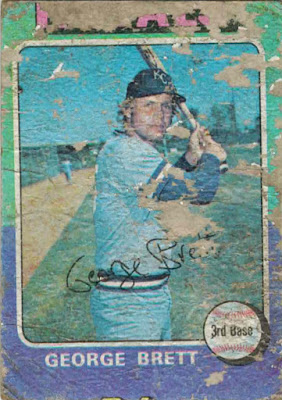 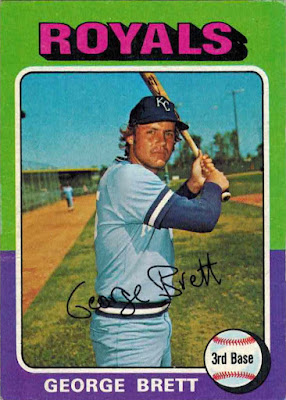 I'm not sure, but there's a good chance that my "washer-used" '75 Brett rookie has been shown on this blog more times than any other single card in my collection.

It's just so perfect for the type of kooky stuff I often write about here, and in some ways, it might be responsible for my decision to start the blog in the first place. I dug the bedraggled Brett out of a 50-cent bin at a show just a month before I launched "Dime Boxes," and perhaps my fascination with it is what convinced me to sit down and start writing about the off-center beauty of such cards, ones that often get ignored in today's money-centric hobby.

While I did later acquire a standard Brett rookie -- a near-pristine one, I might add -- it's the washer-used copy that continues to be tops on my blog and in my heart.
Posted by Nick at 1:00 PM

Nice list! My own Brett rc is a bit water-damaged, although not so thoroughly as yours.

The ‘94 gets a bonus because of the pic on the back where he’s loading a bat with pine tar.

Just jumped over to COMC to grab that '83 Fleer. What a beauty.

I was expecting to see the Brett / Cowens SSPC card from 1976 on the list, but these are all great choices!

Dang. Both of your Brett rookies are really clean (in two different ways). Great list Nick!

My best friend growing up had some ties to Kansas City and his favorite player was George Brett, so I've always been fond of his cards. Great list!