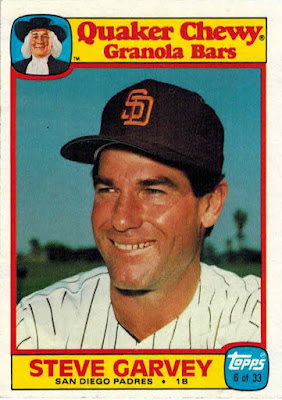 My grandfather passed away last week.

The news hit myself and the rest of the family hard. My grandfather was a big part of my upbringing, and in addition to being a Vietnam vet, was just a great person who'd always treated me with nothing but love and respect.

While I don't believe my grandfather was ever huge on sports, he and my grandmother lived in San Diego for a few years in the '80s, and it was there that my grandmother became a big Steve Garvey fan. She's acquired several pieces of mostly Padre-centric Garvey memorabilia over the years, a fair amount of which she's since passed down to me.

It's mainly because of my grandmother that Steve Garvey sits near the top of my player collection hierarchy, and in honor of her and my late grandfather, I'll be taking a look at my Top Five Garveys on the blog today. 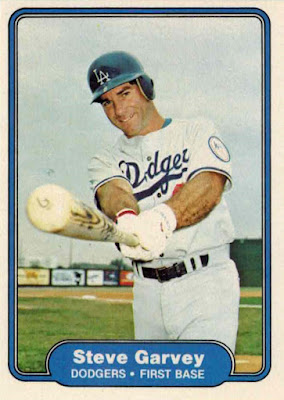 Although bat-barrel shots are one of my mini-collections, I'll admit that they have a tendency to get redundant.

This Garvey, however, is anything but: it's one of the cards that reminds me how great bat barrels can be. 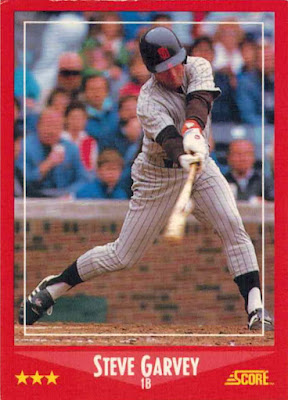 This is Steve Garvey's only true sunset card -- almost every company passed on including him in their 1988 checklists given that Garvey played in just 27 games with the Padres the year prior.

Score was the lone brand to give Garvey a proper farewell, and they did so with a terrific mid-swing action shot that anyone would be proud to have grace their sunset card. 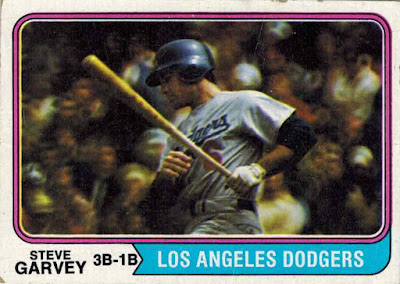 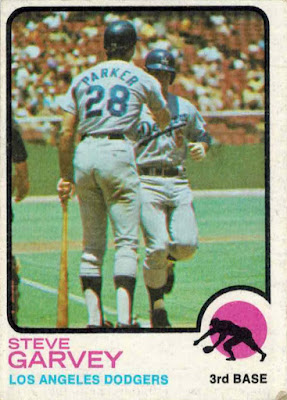 This has remained a cornerstone of my Garvey collection for many reasons:

2) As others have noted, it's almost like Topps was using this shot as a metaphor for the Passing of the Torch in Dodgerland. Wes Parker was nearing the end of his career while Garvey was beginning his at the time, and it wouldn't be long before Garvey replaced Parker at first base for the Dodgers, thus beginning a long road of fame for the young superstar.

3) It's a perfect example of the off-kilter beauty that is 1973 Topps: the photo is about 70 percent Wes Parker and 30 percent Garvey, but yet it's Garvey who gets the card. 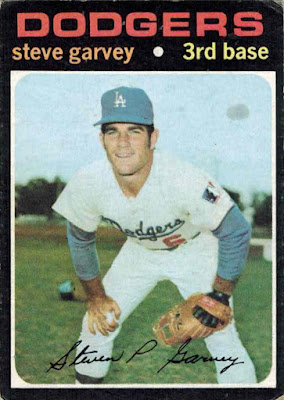 I've mentioned it before, but this remains one of the most nostalgic cards in my collection for the sheer fact that my grandmother passed it down to me when I was a young baseball fan.

I was probably about ten years old at the time, and I couldn't quite process the fact that I owned a rookie card of someone as famous as Steve Garvey (part of me still can't). It was one of the first "big" rookies I ever had, and it remains as such to this day.

There are so few cards in my collection I can point to and say -- Now THAT'S one of the reasons I'm still collecting today. This is one of those rare items, a sacred cardboard portal that has always seemed like so much more than a simple baseball card to me.

RIP, Grandpa -- you and my grandmother have impacted me (and my collection) more than you'll ever know.
Posted by Nick at 1:00 PM

Great collection of Garveys. Sorry to hear about your Grandfathers passing.

Sorry to hear of your loss Nick. Nice tribute post.

Garvey is a fun player to collect. Lots of great cards.
Sorry for your loss, Nick.

Sorry to hear about your grandfather. This was a fitting tribute. :-)

So sorry to hear about your loss. This post was a great way to pay tribute.

They were big Padres fans,and when they moved back to Illinois,they'd go to Wrigley when the Padres came to town..

Sorry to hear about your grandfather.

Also, I basically had the same feelings when I owned the Garvey rookie as a youngster.

Sorry for your loss.

Sorry for your loss. Nice tribute.

A nice way to honor your grandparents and their intersection with your hobby. Nice selection of Garveys, too.

Sorry for your loss

I'm sorry for your loss. This was a very cool way to show your grandparents how much you care about them and how they've impacted your life. Garvey's rookie card is pretty cool to begin with. However knowing that your grandmother once treasured it herself and decided to pass it down to you is truly the coolest.

Great tribute to your grandparents. I am a Garvey fan and coincidentally, my grandma got me started in collecting cards. My 1978 Garvey is my favorite card of all time and it brings back cherished memories of my grandma.