Have no fear, Dad is here 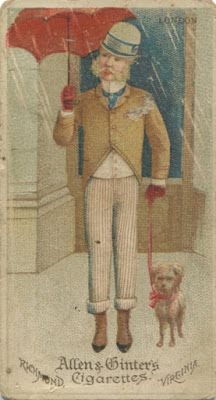 There's no baseball today, and while that would normally be a cause for despair, my dad recently took it upon himself to make the opening act of the offseason just a bit more bearable.

As if the spearing of my ultimate white whale wasn't enough, Dad stumbled upon a few jaw-dropping (pre-)Christmas gifts for me. It goes without saying, but I feel lucky to have someone like him around as a second pair of eyes for my collection, especially ones as impeccable as his.

My dad, like me, is a huge fan of the Dudes inserts from 2017 A&G, and while my focus has been on (slowly) building this year's 50-card set, Dad upped the ante by tracking down an original Dude for me, a set that harkens all the way back to 1888.

Dad considers himself somewhat of a British expatriate, so it makes sense that London Dude was one he'd target. 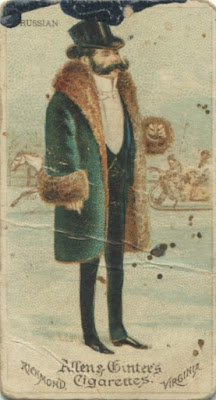 And then came Russian Dude!

Despite my love for this year's Dudes, I somehow never even thought to look for an original specimen for my binders. Given my love for non-baseball subjects, I'm shocked the idea never came to me.

Once again, Dad came to the rescue in the form of what are now the oldest cards in my collection, a pair of awesome Dudes that literally existed before sliced bread. 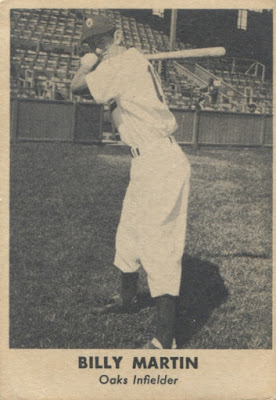 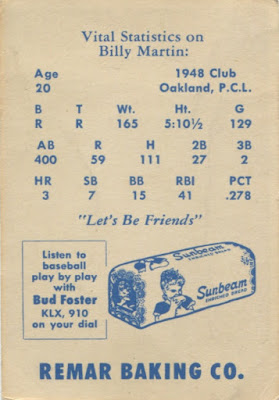 And speaking of bread, Dad just couldn't stop there: along with the Dudes came a 1949 Remar Bread oddball of none other than Billy Martin himself.

Many of the baseball stories my dad told me as a wee lad involved his admiration for Martin and the '70s Yankees in general. This doughy oddball, however, predates Billy Ball by nearly 30 years, showing young Billy during his pre-Yankees tenure with the Oakland Oaks of the PCL (along with his "vital" 1948 statistics on the back).

This is one of those oddities that you could easily go a lifetime without ever finding, but thankfully Dad was there to make sure that didn't happen. 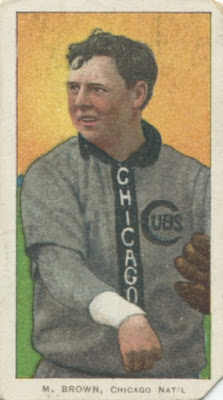 And finally came what was, for me, the biggest WOW card of them all: a real, actual T206 of Mordecai "Three Finger" Brown, my first tobacco card of a Hall of Famer (a hometown HOFer, to boot) and one with a fascinating story behind it.

A couple weekends ago, my dad took a trip down to the Illinois suburb of Rockford to meet up with a few of his vinyl-record collecting buddies. It just so happens that a rather substantial card collection was anonymously donated to a card shop in Rockford, one that features what is thought to be every base Cubs card ever made. (Yes, you read that right.)

While many of the high-dollar items are being auctioned off with more pomp and circumstance, some of the lower-grade castoffs were apparently being sold individually on the day my dad went down to Rockford. Dad said the store owner had obtained three different copies of this T206 Brown alone, and my dad managed to work out a deal for the most beat-up of the trio (notice the missing corner).

Between Dudes, impossible minor league oddballs, and T206 HOFers -- and not to mention that '52 Hoyt from a couple months ago -- Dad's apparently trying to quell any offseason despair by doing his best to trap both me and my collection in a whirlwind of vintage goodness.

With a dad like mine, I guess there is no offseason.
Posted by Nick at 6:07 PM

Sweet!!! Can’t decide which I like better, the Martin or the Brown!

I'm not sure anyone who owns a T206 Hall of Famer gets to call himself a "low-end" collector! B^) Congrats.

HERE'S the story on that Rockford card shop, and the Cubs collection.


just copy and paste it.

Wow, those are some amazing cards!

If any of y'all decide to hunt down some original Dudes,I got those pretty cheap!..under 10 bucks each!!

I have to say, I have no love for Billy Martin, but that's an awesome card.

Wowza! Love that your dad supports your hobby. Obviously any HOF tobacco card is amazing, but the Billy Martin is the card that really caught my eyes. He's my favorite manager of all-time. I really enjoyed watching him during his years with the A's during the Billy Ball era.