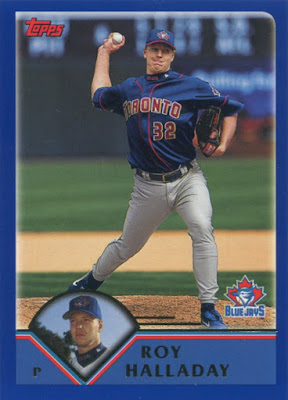 As you've probably heard by now, Roy Halladay tragically died in a plane crash earlier this week at the too-young age of 40.

I've been stuck in a mixture of shock and despair ever since I first heard the news. Not so much because I was a close follower of Doc's -- I probably hadn't thought him at length about in years -- but because there's always a sense of disbelief when a player from my baseball adolescence suddenly passes away.

With a 3.38 career ERA and two Cy Youngs to his credit, Halladay's a borderline HOFer, but more memorable to me is the fact that he really seemed like the last of a dying breed, a guy who craved to finish what he started. He pitched nine complete games in four different seasons over his 16-year career, a number that's darn near unheard of now. (Corey Kluber and Ervin Santana tied for the league lead with five each in 2017, for what it's worth.)

It doesn't seem fair that a guy who retired just four years ago could be gone forever, and it's with a heavy heart that I make Doc the focus of this week's Top Five. 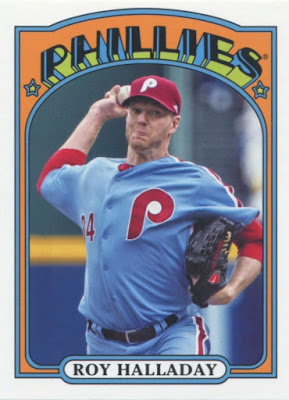 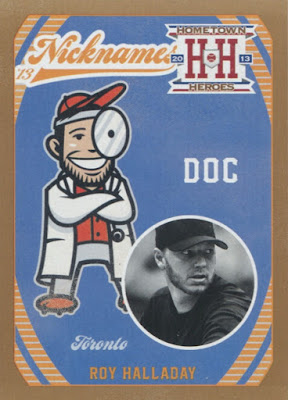 Roy Halladay was known as "Doc" for the better part of his career, a label I'm guessing he earned due to the way he used to carve up opposing hitters.

As one of the better insert sets in recent memory, these nickname inserts from Hometown Heroes make for a fun, cartoonish look at some of the game's best monikers, "Doc" included. 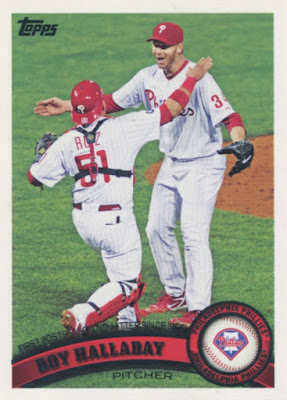 My premier memory of Roy Halladay is the no-hitter he threw against the Reds in the 2010 NLDS, the moment documented on this very card.

The burst of joy Doc's no-no provided came during a time I sorely needed it. I was 18 years old, away at college, and miserable. It'd become clear rather quickly that I just wasn't cut out for a dormitory life, and that single semester I spent away from home would be the only one of my college career (for now, anyways, until I get the grad school situation sorted out).

I spent a lot of time alone in my dorm room during those four months, and one evening, as I watched Game 1 of the Phillies-Reds NLDS on the outdated Zenith television atop my desk, it soon became apparent that something special was happening. Pitches, innings, hours were going by...and Halladay still hadn't given up a hit.

I was (and still am) a superstitious viewer of baseball. My roommate grew confused when I wouldn't tell him what was going on despite my obvious excitement at what was transpiring on my grainy TV set. Both of us, it turned out, were relieved when Halladay retired the final batter, at which point I jumped off my tiny dorm-room bed and yelled: NO-HITTER!

For that, Doc, I thank you, wherever you are. 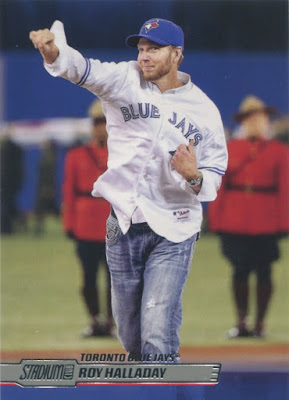 Though he may have received more national recognition as a Phillie, Doc was a Blue Jay for the majority of his career.

He signed a one-day contract with Toronto to officially retire as a Blue Jay, and he's seen here delivering a first pitch at the Rogers Centre in what I can honestly say is the only baseball card I own with a mountie sighting. 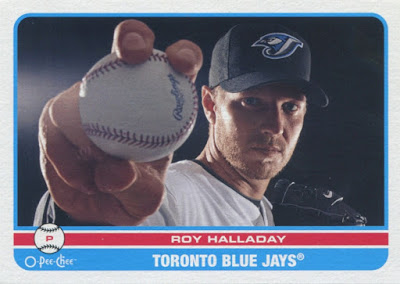 I became well acquainted with this card (or at least the black-bordered version of it) after seeing it on Night Owl's blog header for many years.

And while it took longer than I would've liked, it was a joyous day when I finally tracked down a copy for myself. I personally think UD's one-and-done OPC brand is one of the better sets of the last decade, and this might be the single greatest card of the lot.

When I think of Doc's baseball cards, this is the first image that comes to mind. And though I'll feel a tug of sadness whenever I look at it now, there's still a sense of serenity in this simplistic studio shot. It's a powerful image of the late Roy Halladay, arguably the best -- and definitely the most respected -- pitcher of his generation.

Nice post,boy...hope he makes the Hall...

Nice selections... I especially like the "1972 Minis", and I think that might be the first time I've said that about a card from that insert set.

I'm not sure what the origins of "Doc" are, but I've always assumed that it was a play on "Doc" Holliday of "Gunfight At The OK Corral" fame.

Joe Shlabotnik is correct...the nickname was a reference to the Wild West figure. It was coined by Jays announcer Tom Cheek.

Don't think I ever truly appreciated that 2009 OPC card of Doc... until this past week. What a great looking card. I miss Night Owl's old blog header. He truly had some classic cardboard on it... like the 81TT Fernando Valenzuela and the 2010 National Chicle Jackie Robinson.

Definitely a shame. He was a beast on the mound. You couldn't help but enjoy watching this guy pitch. Great cards you showcased here as well with your top 3 standing out to me. Great post. Thanks.