Waiting is the hardest part 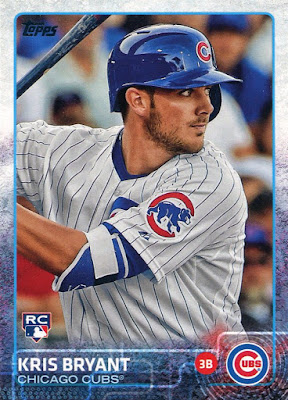 I finally pulled the trigger on this 2015 Topps Kris Bryant at a show late last year, forking over five whole dollars to add it to my collection, which is far more than my Dime Box budget usually feels comfortable spending on a modern baseball card.

This came after nearly two years of waiting, two years of hoping it'd fall out of a random pack throughout all of 2015, two years of praying someone out there would somehow obtain a spare copy and send it to me. I paid the five bucks when it seemed apparent that neither of those things would happen.

So what fell out of a trade package from Greg of "Night Owl Cards" fame just weeks after that show? You guessed it: a 2015 Topps Kris Bryant. Quite a cruel trick played on me by the baseball card gods, I must say, testing my patience to a breaking point like that.

I did manage to find a home for the spare card of Mr. Bryant, but I can't believe I actually owned two copies of it for a short period of time there. 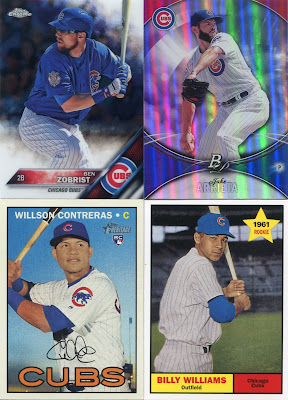 Thankfully, patience held out with the rest of what Greg sent, a package which included a nice helping of recent Cubs. 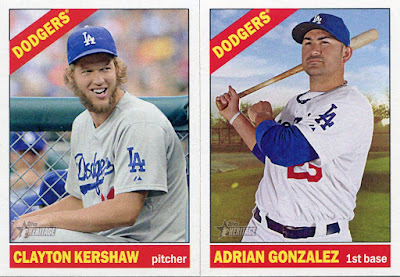 I, like many around the blogs, have reaped the benefits of Greg's Dodger duplicates. 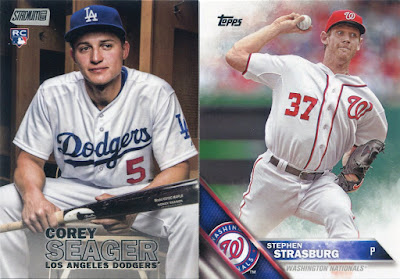 A couple from last year's want lists and a reminder of the painful fact that there are still a handful of 2016 Flagship base cards I need. 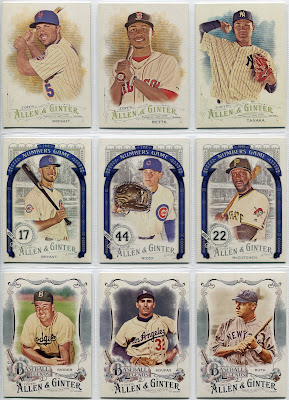 From the looks of it, Greg spent a good deal of time and effort combing through my want lists, absolutely obliterating my 2016 A&G needs in the process. 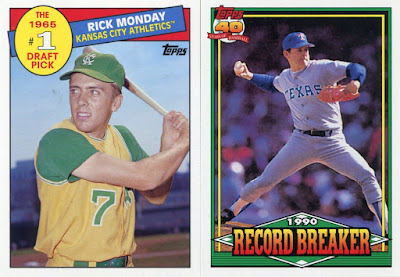 A couple prime insert wants, including the rare appearance from Rick Monday in a modern checklist and a Nolan Ryan reprint from last year's "Berger's Best" series.

I still find reprints of anything past 1990 a bit jarring. 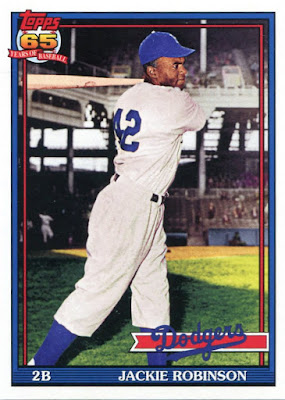 This was probably my favorite of the batch Greg sent, a beautiful Archives Jackie that had slipped through my fingers for all of 2016.

As I've mentioned before, Topps has a tendency to recycle the same few images of Robinson, so it's refreshing to see a shot of him that hadn't yet been used on a baseball card (as far as I know). 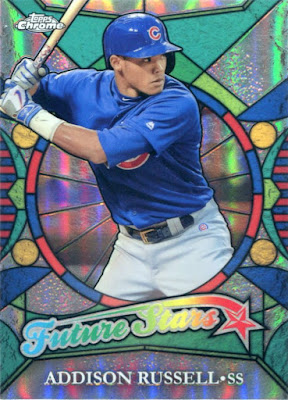 Because I'm so behind on my trade posts, I've been posting the spoils of multiple packages from some of my most consistent trading partners.

This is the case with Greg, who sent a second stack of cards my way shortly after that initial 2016-centric batch, including this beautiful stained-glass-style insert of the Cubs' shortstop of the future. 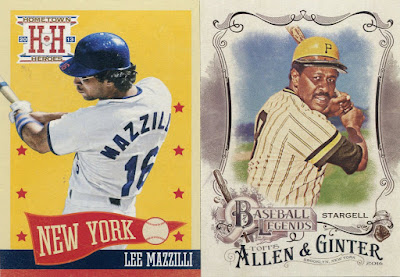 A couple greats from a generation past, and it's hard to believe I didn't already have the Mazzilli considering the gobs and gobs of Hometown Heroes I bought when that set was on the shelves back in 2013. 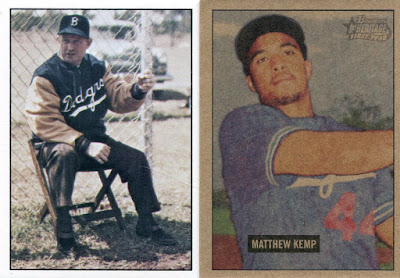 A couple more Dodger dups from Greg, including a TCMA oddball of former Bums skipper Chuck Dressen with a nice old-time automobile in the background. 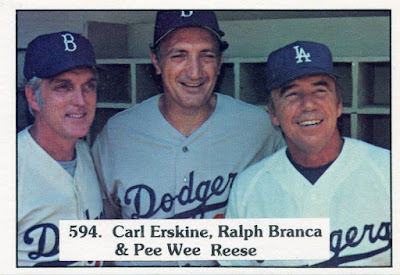 Don't look now, but I just recently received a third package from Greg to show in this post, which tells me I really need to get it together when it comes to recapping trades.

I've nearly went out and bought this very card on a couple different occasions after seeing it on Greg's blog, a terrific SSPC oddball featuring a trio of Dodger greats (though I'm not quite sure why Pee Wee is wearing an LA cap as opposed to the Brooklyn "B" on Erskine and Branca).

Unlike the Bryant saga, patience thankfully won out in this case. 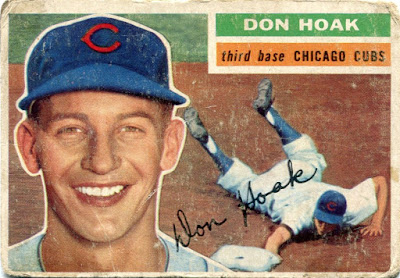 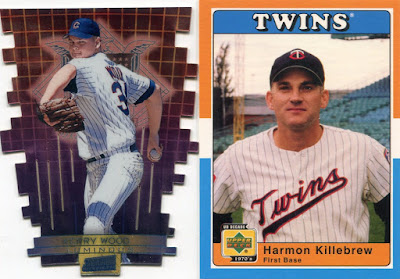 A couple fantastic additions to the binders, although the crazily-shaped Kerry Wood was a challenge to slip into a nine-pocket page. 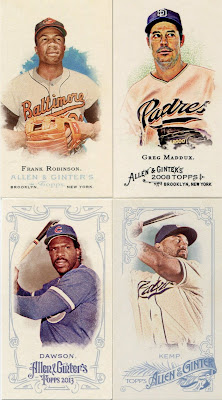 Minis from throughout the long lifetime of A&G. 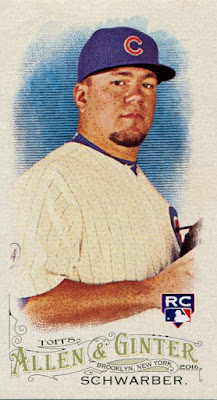 Here's another A&G mini of a guy you might've heard of -- a no-number, mind you -- although truth be told I knew this one was coming from Greg ahead of time. 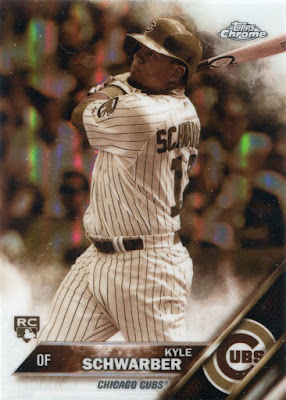 That's because I pounced when Greg offered up both the aforementioned no-number mini and this nifty sepia refractor of Kyle Schwarber on his blog last month.

Anthony Rizzo aside, Schwarbs is probably my favorite current Cub, and I've somehow had good luck at pulling his cards out of packs and/or having them sent to me by others. Though it's not usually in my nature to claim cards from bloggers, I had to keep the Schwarber streak going when Greg put these two beauties on the trade block.

I thank the baseball card gods that I didn't have a chance to buy either of them before last month, because I can pretty much guarantee that Schwarbers of this caliber would've been priced far north of the five dollars I paid for the Bryant rookie.

Sometimes collecting can really be a test of patience.
Posted by Nick at 6:21 PM

My patience has gotten a lot better during the life of my blog. I think Topps Now finally convinced me that it's better to wait than jump at everything.

I honestly had no idea that any 21st century Topps non-variation, non-parallel base card (outside of the Trout rookie) was worth more than maybe a buck. Now I wonder if some kid that came to our house at Halloween the past two years got a Bryant rookie in with their goodies (although I didn't really open many Series 2 packs that year, I bought a factory set instead).

Lots of great stuff. Hey, I may have missed it but have you read, "The Cubs Way"? Great book for any Cubs fan. Fun stuff about Shwarb. Loved the story Theo tells about interviewing Kyle.

Tons of great cards... but I agree the Archives Jackie is Topps.

Isn't that how it always goes? Oh well, I guess there are worse problems to have than having two KB rookies!

You let the 2nd Bryant go? My hoarding nature kicks in at times like that. I have a few of his RCs - numbered or refractored(?) - can't let them go just yet.