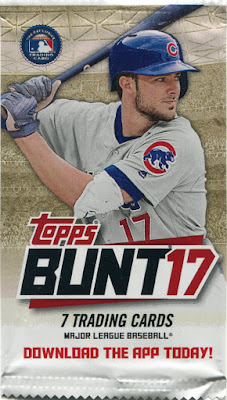 I've been hanging on the edge of my seat waiting to hear the fate of Topps Bunt all year.

After all, I hadn't caught wind of any plans regarding a sophomore rendition of 2016's well-received Bunt brand, and I wasn't planning to for a while. Bunt was, after all, a late-season release that didn't hit the shelves until August of last year.

So you can imagine my surprise when I learned via a handful of random Twitter posts that 2017 Topps Bunt was not only alive and well, but actually on the shelves. How could I have missed this? I had to check my calendar to make sure it was still May. Such a dramatic change in release date is nearly unheard of in the hobby, best I can remember.

Like last year, I decided to take full advantage of Bunt's cheap price point: I eschewed the retail route altogether and just purchased an entire 36-pack box online, which wound up on my doorstep just a few days later.

Though the price went up a bit this year (I paid around four bucks more for the box), you still can't argue with the cheap fun Bunt provides at less than a dollar per pack. 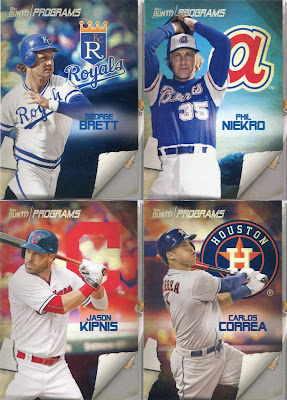 We may as well begin my 36-pack extravaganza with the inserts, and specifically the lone carryover from 2016's product with this "Programs" series.

I said it last year and I'll say it again: any design that harkens back to old-time media is a winner in my book. 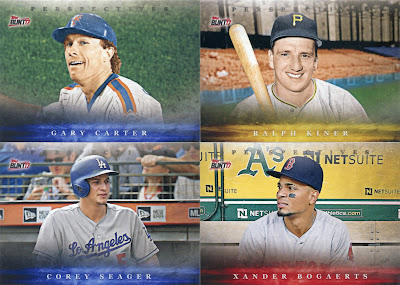 New to Bunt this year are these "Perspectives" inserts.

They're okay, I guess, though it's a bit saddening that the calm, non-action shot has become such a thing of the past that it has to be relegated as something unique that warrants its own insert series. 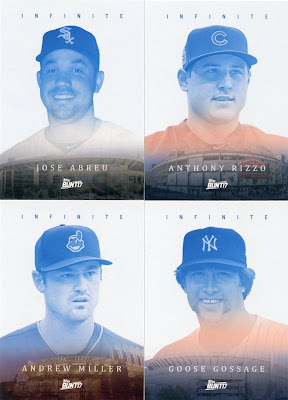 Again, they're fine inserts. It certainly beats a lot of what Topps has been putting out these days, and I always enjoy seeing stadiums worked into a baseball card design.

But something about these ghostly images reminds me of something you might see on a slide show at a funeral and I just can't unsee it -- though maybe that's just my morbid self talking. 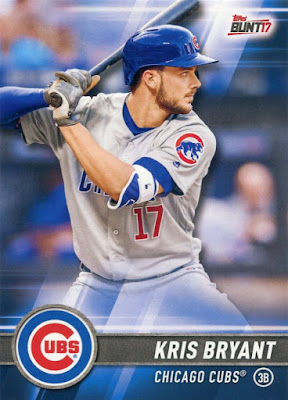 Enough of that insert talk: we're all here for the base cards, of course.

The standard structure of Bunt hasn't changed a whole lot from last year: a 200-card checklist, seven cards per pack. Yet, as evidenced from the "cover boy" himself -- Kris Bryant -- the similarities pretty much end there.

The large team logos of 2016 have been shrunken and placed in a small bubble in the bottom-left corner. The design, as is commonplace in today's age, does suffer from being a bit heavy on the TV-graphic look. The backgrounds are much more blurred to the point of near nonexistence. These are all strikes against 2017 Bunt.

But a huge plus for me this year is the prevalence of colors in the design. Like the Cubs-centric blue scheme seen here with Mr. Bryant, each card is color-coded based on the team of the featured player.

This change is positively refreshing and a far cry from the dull grays and whites seen in a lot of Topps sets these days. 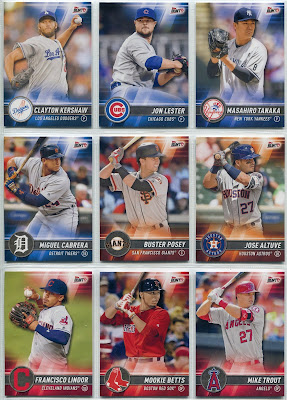 One of the major changes in 2017 Bunt is the banishment of retired players from the base checklist.

The likes of Mays, Ruth, etc. are only found in the inserts this year. All 200 of the base card subjects (with the exception of David Ortiz) are current MLB'ers, and not many surprises. Like last year, most of them are stars you'll see in every other set.

I'll admit that I'm a little disappointed to see that the legends are no more, but it's not a major problem: after all, I think I'll live without my 219th card of Brooks Robinson. 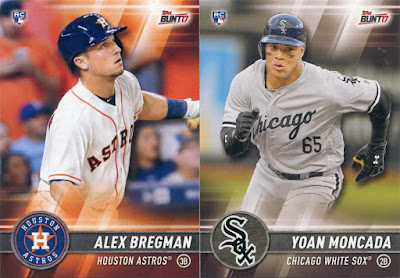 I usually select a handful of rookies to start collecting every year, and Bunt allows me a cheap and easy opportunity to pick up cards of said rookies. 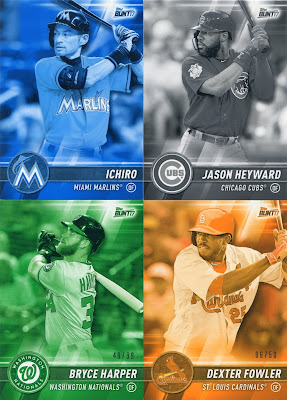 The biggest tweak in Bunt this year, however, is the influx of parallels, and I'm still not quite sure how I feel about it.

I didn't check, but I'm pretty sure I got a complete base set out of my box of 2016 Bunt. This year, I probably only got a bit more than three-quarters of the set out of a box with the same number of cards (shameless plug: my wants are listed under my "want list" tab if you have any to spare).

This is due to the fact that each seven-card pack now contains a blue parallel (as seen with the Ichiro), as well as another insert or two, leaving me with only four or five base cards per pack. The black, green, and orange parallels are tougher finds, each falling at a rate of about one per box, though I'm happy to report the three I pulled were all of guys I collect.

For perspective, I pulled exactly one parallel in my 36 packs of Bunt last year. Granted, I am a self-defined parallel fan due to how nice they look next to their base counterparts in nine-pocket pages. But I'm not so sure it works with Bunt. The existing colorfulness of this year's design pretty much eliminates the need for colored parallels. 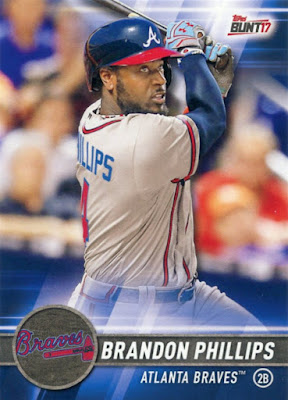 Overall, I can say with utmost certainty that 2017 Bunt does not suffer from the dreaded "sophomore slump," and it's appropriate that Kris Bryant is the face of the packs considering the man won an MVP in his sophomore season last year.

In fact, I think I'll go on record and say I enjoy 2017 Bunt a bit better than its debut release. The colors won me over, as did (in a smaller way) my first card of Brandon Phillips as a Brave.

I don't open many boxes of baseball cards, and I'd nearly forgotten how fun busting 36 packs in one sitting could be before this past Saturday. So many cards piled up in disheveled stacks on my bed, so much sorting, so many mangled pack wrappers, so much need it, need it, don't need it, need it. In short: Paradise.

Bunt gives low-end collectors like myself the chance to experience that euphoric feeling.
Posted by Nick at 6:09 PM

I picked up a box of it this weekend as well, but I haven't opened it yet. I'll definitely check your want list when I do crack it open.

I really like the base card design this year. If things go as planned... these will be on clearance right around Black Friday. That's when I'll come in and buy a box or two.

The infinite cards would make for good TTM fodder.

I really like the "Programs" cards...nice set in general and can't beat the price!

I love the Carter and Kiner cards. Very nice!

does anyone know how to trade the silver cards for gold base?