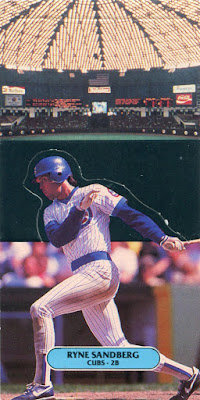 Last night, I got to reminiscing a bit about my Little League days with my mom.

Funny thing is, I found that I don't have a ton of vivid, concrete memories of playing ball. You can probably count them on one hand. Notably: I remember the time I swung and missed in tee-ball, the time I threw out two runners in one game from center field, the time I turned an unassisted triple play (the last of which is my crowning Little League achievement). The remainder of my memories are plentiful, but mostly short, fuzzy images and abstractions.

Memories or not, the fact of the matter is that I was never a star player. I was never more than a .250 hitter (a rough estimate since we didn't keep stats), I never hit for power (I retired with zero career home runs), and I was never the coach's son, which explains why I pitched exactly one inning in five years of Little League.

Though I played a fair amount of second base, Ryno I was not. 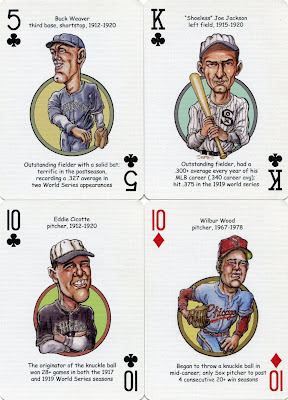 I suppose my average athletic ability is part of the reason I was drawn to collecting at an early age.

The fact that I much prefer watching competitive sports as opposed to playing them led to my decision to quit Little League after 5th grade and stick to accumulating pieces of cardboard. I never played a single inning more after that (though I did play slow-pitch softball for my school in 8th grade) and admittedly never attended any of my high school's baseball games.

Collecting is quiet, relaxing, and often done in the comfort of my own room, which is much more my speed.

All these years later, I think I made the right choice. 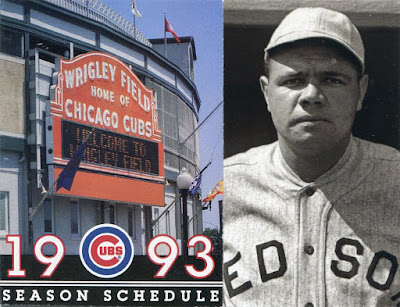 Here today, I'm still accumulating more than ever, only now I have this thing called the Internet to connect me with fellow card-collecting pals who sometimes send me stuff.

Among those comrades is the famous reader Mark Hoyle, who sent me a PWE a while back that was long overdue for display on the blog. Along with the Ryno and White Sox oddballs above, Mark also included a '93 Cubs pocket schedule (isn't that the year Henry Rowengartner pitched for them?) and a Babe Ruth which, upon flipping it over, was actually revealed to be a business card for a Boston-area memorabilia shop.

Then came the ever-present question: is that a baseball card? 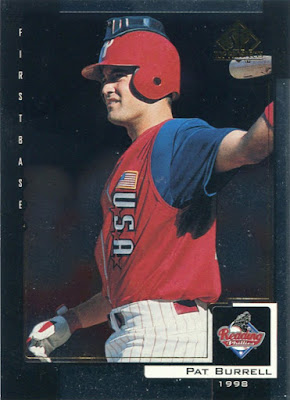 Next up are the spoils from a few different PWEs I received from P-Town Tom of the excellent "Waiting 'til Next Year" "Eamus Catuli!" blog.

One of those envelopes included a card that caught Tom's attention, and one that I may well have passed up without a second thought without his eagle eye. In his note, Tom asked a fair question: just what is that on Pat Burrell's helmet, anyways?

His guess that the item in question is some sort of primitive helmet-camera device is probably the right one, but it's still strange to see on a baseball card. 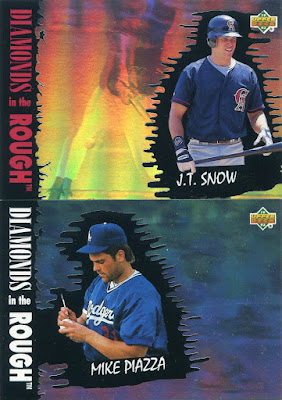 Here's a couple additions to my JT Snow and Mike Piazza collections that I specifically requested from Tom, though I mainly wanted the Piazza for the autograph mini-collection hit. 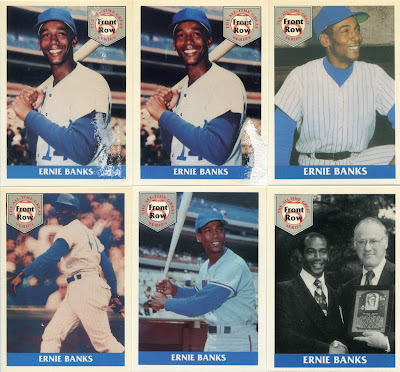 I always, always love tracking down these small oddball sets, and I was ecstatic when Tom sent the complete Front Row checklist of Mr. Cub my way.

Oh, and contrary to what I originally thought, those first two aren't doubles: one's a promo, and one's the regular issue...and that, my friends, is why you check the backs of your baseball cards. 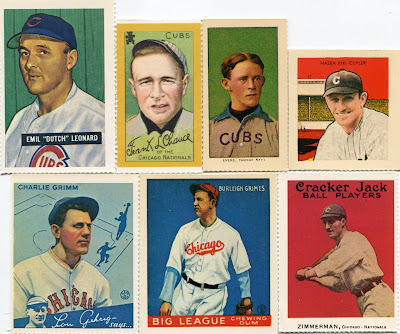 Tom capped off the Cubs extravaganza with a gaggle of Dover reprints, also some of my all-time favorite oddballs given the appearances of oft-forgotten names like Dutch Leonard and Heinie Zimmerman. 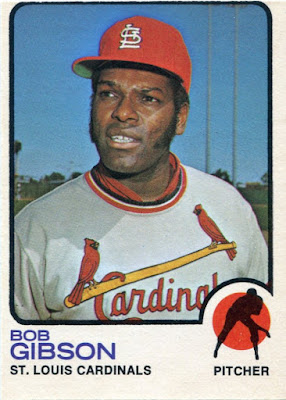 Here we have the start of a small but sweet PWE I received from Jon of "A Penny Sleeve for Your Thoughts" fame, a blog which I'm happy to see is up and running again.

While it's a nice one, I do already have a copy of Bob Gibson's '73 Topps card, and I was nearly ready to throw it in my doubles pile when I decided to (again) check the back. 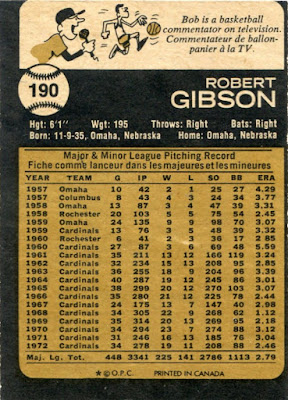 The French text and tinted color can only mean one thing: O-PEE-CHEE!

I don't often cross paths with early '70s OPC, and it's even more rare to find big stars like Gibson here, which made this a definite score for my Cardinals binder. 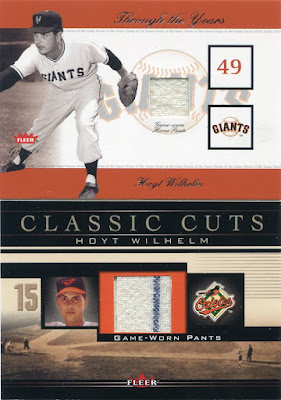 Also included were a couple new game-used issues of the Hoytster, one of the few guys whose jersey (or pants) cards still manage to excite me. 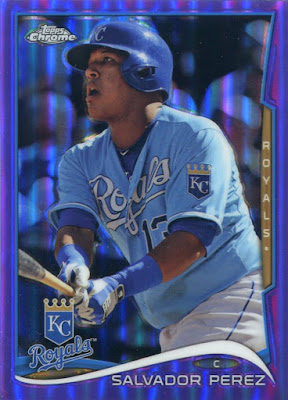 Lastly, we have a couple envelopes I received from my buddy Shane of the terrific "Shoebox Legends" blog, starting with this purple refractor of Salvador Perez that pairs up perfectly with the colors of the Kansas City Royals. 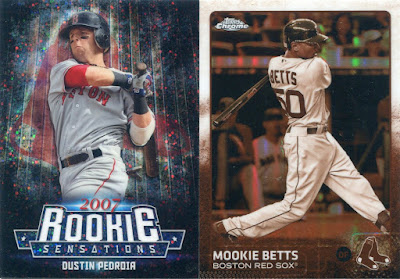 Shane's a big Red Sox fan, and I appreciate him sending a couple of his dups my way with these shiny Pedroia and Betts gems. 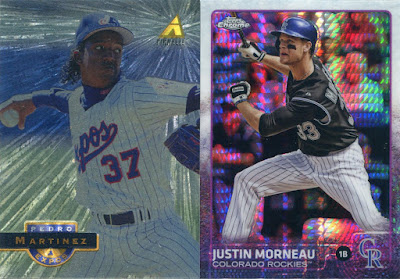 While I love today's refractors, I think parallels may have reached their peak with the Dufex technology of the mid '90s. 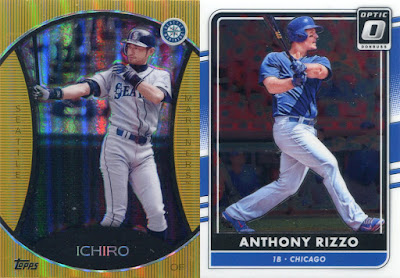 If these PWEs are any indication, Shane is all about shiny, as exemplified by Rizzo and Ichiro here, the latter of which was a cereal box promotion back in the day, if I remember right.

I was never a big cereal eater at any stage of my life, but I'm pretty sure I ponied up for a box of Lucky Charms (or whatever product those cards were issued with) at the time. 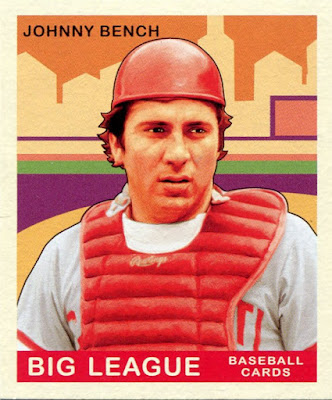 Let's close things out with this outstanding Goudey short-print of Johnny Bench, which reminds me of another of my fleeting Little League memories.

Most teams I was on had one kid who really wanted to catch, and fifteen others who didn't. I was one of those fifteen, but during one of my first years of Little League, my coach decided that every kid should get a chance to try each position. I understand his logic, but the fact was that I really didn't want to catch, and I couldn't wait for my one inning behind the plate to end. It'd be the only time I'd don the tools of ignorance in my Little League career, thank God.

My five years of Little League were happy times for me, but I've found that I have a lot more specific memories attached to my lifetime of collecting. Even more so now that I have this little thing called a blog where I can document it all.

Inside every kid who ever dreamed of stardom are fond recollections of Little League, and whether you know it or not, inside every baseball card is a precious memory.
Posted by Nick at 5:30 PM

First, GREAT cards! Secondly, I am impressed by the unassisted triple play. I was an athlete throughout my school days (even if I have to say so myself, lol). 5 sports (although, one was not as a starter/1st string), even played on some baseball championship teams as a youngster, and I don't recall ever seeing one. That memory alone would be priceless. Congrats on the cards and the triple play!

Forgot I sent this. I was a middle infielder my whole career up through 4 yrs in college. Speaking of which my nephew s playjng in Div 3 college World Series starting this week

Love that Bob Gibson O-Pee-Chee and I have one of those Johnny Bench cards. It's one of my favorites.
You have got to be the ONLY collector in our community with an unassisted triple play under his belt!

Awesome cards. My fave is that Goudey Bench. Great looking card. One of my little league coaches tried to turn me into a catcher. However I had the perfect excuse not to be one. My parents refused to go out and buy a left handed catcher's mitt.

I played catcher for about 4 years and had a blast. Once I got to more advanced leagues we had kids that had better arms than me so I moved to second. I remember the hardest thing about catching was trying to learn how to catch curve balls. My last year was the age at which many kids started to throw them and I remember my arms were all bruised.

I caught most of one little league season,and your uncle Phil played 3rd...we were a great combo throwing out potential base stealers!...

I certainly have fond memories of your LL career..

I caught in little league until I started growing too fast and my knees began giving me problems. I really loved it because I was part of every pitch. I switched to pitcher shortly afterwards.
Glad you liked the cards! Good call on the primitive helmet cam!

Glad you enjoyed the cards Nick, I'm way overdue in getting another package your way. Will try to rectify that soon here!

Thankfully my little league career isn't over yet. I'm also thankful that I'm good enough to at least still be able to dream of being a major league player, though I know it's probably not going to happen.