The life of a collector 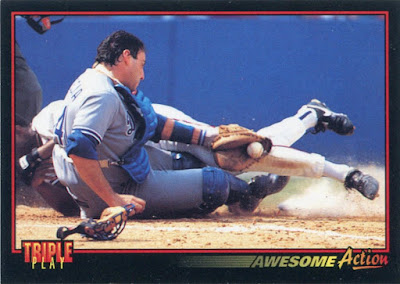 Last month, a few friends and I took a road trip down to St. Louis for the weekend.

No, we didn't catch a Cardinals game -- none of the friends that came along are especially big baseball fans -- and we actually left on the last day of the regular season, the very afternoon the Cards were eliminated from the postseason.

It was, however, still a fun few days overall. Friends, food, beer, no work: what more could you ask for? I'd been to St. Louis twice before, but those trips were quick overnight stays centered around Cardinals games. I felt like I really experienced the city for the first time last month, and I loved it.

But I'd be lying if I said baseball wasn't fresh on my mind that weekend. 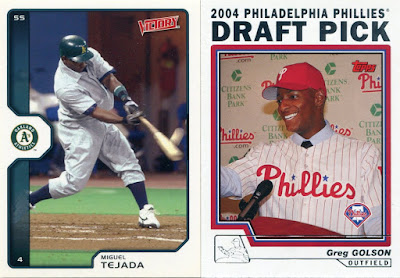 You see, the one thought I just couldn't shake the whole drive to St. Louis was: I really hope I can hit a card shop down there.

I think about cards when I'm crossing state lines 500 miles away from my home. 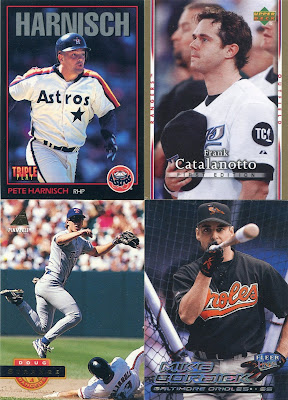 As it turns out, I didn't get to sample any St. Louis card shops.

The closest one was six miles away from our Airbnb, and we didn't really have a whole bunch of time to play with -- not that any of my friends would've been particularly keen about tagging along to a card shop in the first place. (Though I did score a minor victory in getting them to wander around a nearby bookstore with me for a few minutes.)

In the end, it wasn't a total loss, especially since I had received a package from John of "Johnny's Trading Spot" fame just prior to my trip. 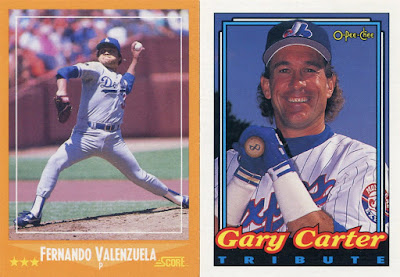 All the mini-collection hits you've seen thus far came from that package, as well as these two hallowed "Dime Box Dozen" nominees.

The Fernando is an overproduction-era common of the star hurler that I somehow didn't already own, and the Carter was the last piece I needed to complete '92 OPC's five-card tribute to the late catcher. 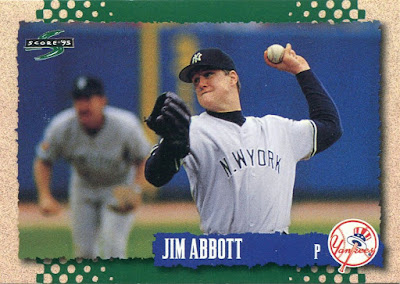 That smaller offering complemented a behemoth of a mailer John had sent during my hiatus earlier in the year.

We'll get to exactly why this trade package was so large in a bit, but I'll start by saying John sent along an exceptionally healthy amount of singles I needed, starting with this beautiful Jim Abbott from '95 Score.

Like many sets from the '90s, I seem to be in the vast minority of people who enjoy this design. 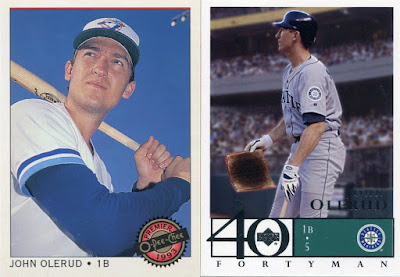 I'm almost certain John has bolstered my John Olerud collection more than any other blogger out there, which is fitting since they share the same first name.

Note the rare pine-tar rag cameo on the card on the right. 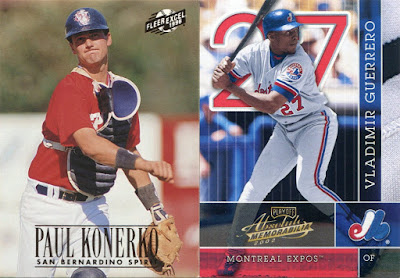 I get unnaturally giddy whenever I find a new card of young Paulie in catcher's gear.

The Vlad looks to be some sort of promo, as it doesn't have the standard glossy finish of most Absolute Memorabilia sets.

Also: bet that's the first time anyone's mentioned the Absolute Memorabilia brand on the blogs for at least a year. 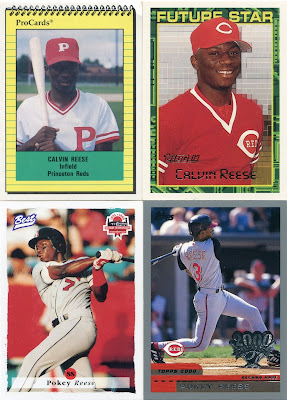 I don't think I've ever formally announced that I collect Calvin "Pokey" Reese on the blog, but John seemed to send these with the hunch that I did.

He's right. I do collect Pokey Reese, and I needed each and every card from this quartet.

I mean, seriously: how could I not collect a guy named Pokey Reese? 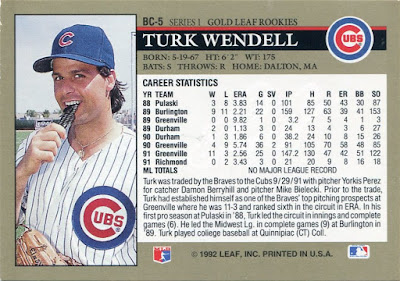 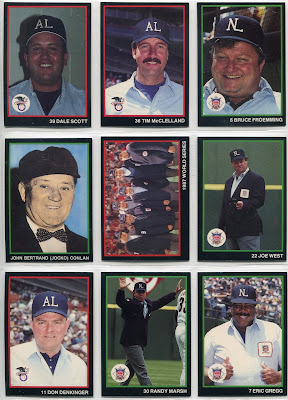 Now we're starting to get into oddity territory.

I can't say I've ever gone out of my way to chase cards of the men in blue, but flipping through the 1988 T&M Umpires set John sent along was still a treat. I've never been a savant when it comes to knowing the game's arbiters, although I did recognize a handful of the names in here.

Notables include the polarizing "Country Joe" West, Eric Gregg (RIP), the legendary Jocko Conlon, and Dale Scott, who recently made history as the first MLB umpire to come out. 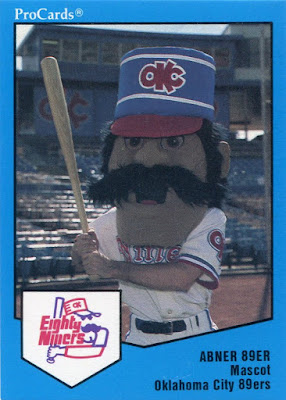 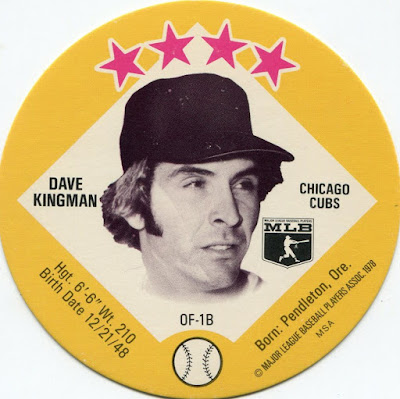 Dave Kingman is one of my favorite guys to collect, and here's a neat '70s oddball I'm excited to add to the collection. 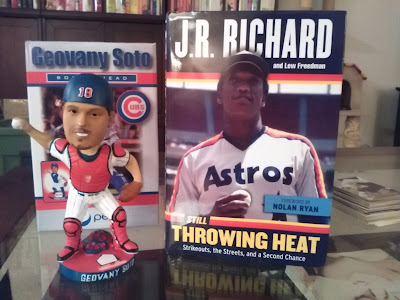 Here's a couple items you don't see in trade packages every day: bobbleheads and books.

In terms of sheer volume, this is why this package was so large. It seems like an eternity since Geovany Soto was a Cub, and an eternity-and-a-half since he was good enough to be worthy of a bobblehead.

I often complain at my bookstore job that everyone on the face of the earth seems to have some kind of biography/autobiography on the shelves these days, but JR Richard is one of the few whose story is actually worthy of the printed page.

Sad part was, I didn't even know he ever published an autobiography until this package arrived. 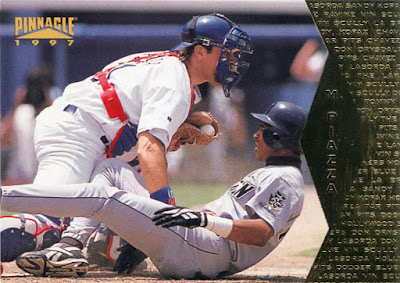 This package had its fair share of new mini-collection scores as well, starting with this Mike Piazza PATP on '97 Pinnacle's obscenely intrusive design. 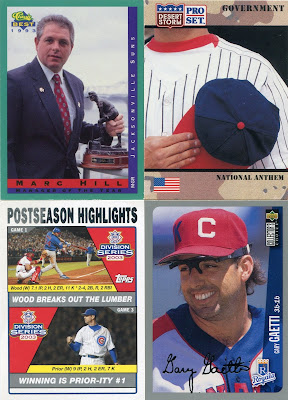 It took until the third or fourth viewing for me to realize that the Postseason Highlights card features a shot of Kerry Wood at the plate. 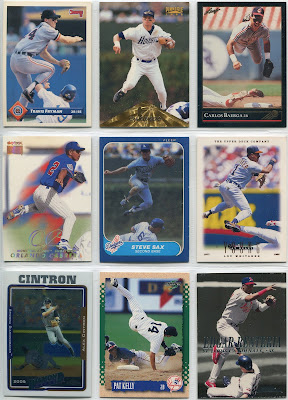 Here's a full page of new double dips from John, and this wasn't even all of them. 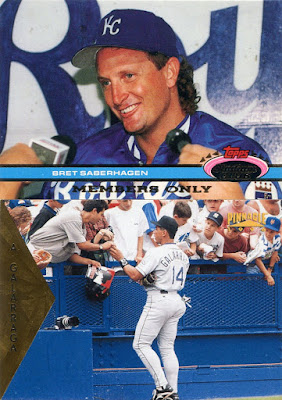 A couple for the "interview" and "autograph" archives.

And yet another fairly intrusive design from Pinnacle, to boot. 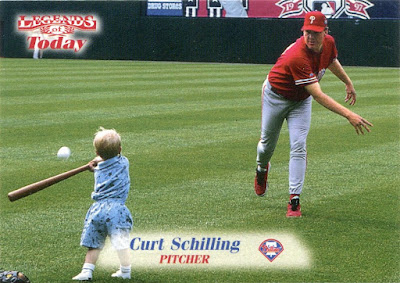 I don't think Curt Schilling is anyone's favorite person these days, but this is still an adorable baseball card, and perhaps my favorite from this gargantuan trade package from John.

I may not blog as much these days, but don't let that fool you. Cards are still on my mind quite a bit. You wouldn't believe how often I'm at school or on a bus and think to myself I wonder how many Vlad cards I'm up to now? or Geez, Lou Whitaker seems to have a lot of double play cards or Only five days until the next card show.

Ask any longtime hobbyist, and I'm sure they'd all say the same thing: the collector's mind is an afflicted one, but it's not so bad.
Posted by Nick at 5:30 PM

Next time you go to St. Louis, leave your buddies at home, and you can go to all the card stores/book stores that you want.

Whenever I travel for work the first two things I check is card shops and beer stores!

Great mascot card. I'm glad that I'm not alone when it comes to thinking about card shops on vacations. I'll take it one step further and add flea markets to my list. But it always comes down to the company. Some people are patient enough to check them out... while most of them aren't.