Dime boxing at night (Scenes from the card show) 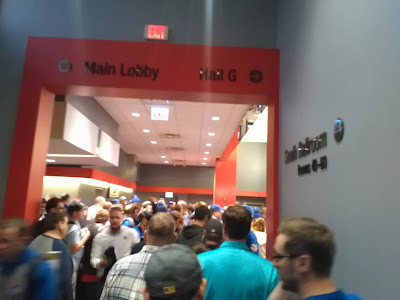 The show runs Friday-through-Sunday, but Saturday has been my day of choice for the many years I've been attending this gathering. It's the longest running day of the three (10 AM-5 PM) and seems to draw the biggest crowd.

As luck would have it, however, Friday was the only day I had off work last weekend. This caught me a bit off-guard since the show runs during nighttime hours (4 PM-9 PM) on Friday -- and that's not even mentioning the fact that the lobby was mobbed since Friday was also Cubs Day with the likes of Hendricks, Schwarber, Russell, & Co. at the autograph pavilion.

Dad and I waited in a line that stretched around three different hallways as we waited to get inside the convention doors. 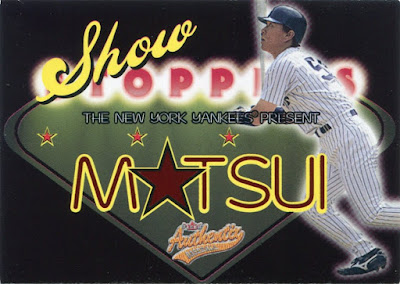 I didn't really realize it until Friday, but card shows have been daytime activities for my entire life.

This was the first time I could remember attending one at night, and I have to say, the experience was kind of cool. There was something about dime boxing under the lights in the evening hours that I found innately calming.

As you might guess, most of the people inside the jammed lobby were there for autographs and autographs only. The crowds in the vendor aisles were sparse, and I didn't have to push my way into any tables.

Plus, since Friday was opening day at the convention, I got first pickins' of the floor. 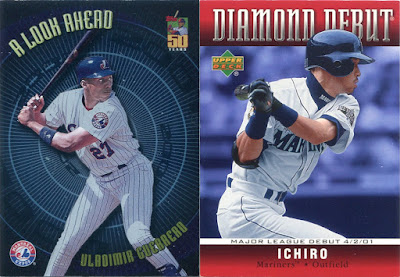 Part of me was (irrationally) worried that a nighttime show on what is still technically a weekday would mean lesser quality cards and vendors.

That theory proved to be false: Vlad and Ichiro -- two of my card show staples over the years -- were still overwhelmingly present. 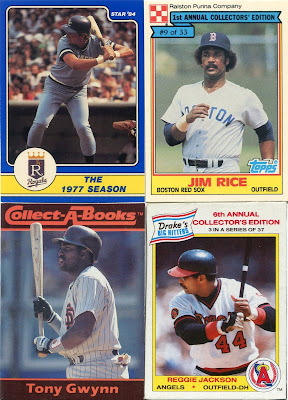 It's just not a card show without them. 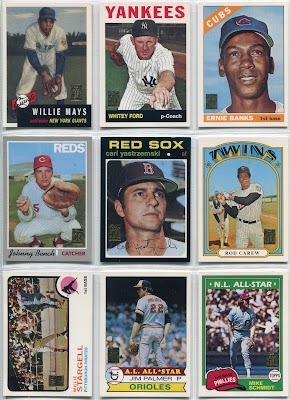 One of the first tables I hit appeared to be run by a kid, and I mean that literally: a kid who couldn't have been more then twelve years old took my money and gave me my change and told me thank you.

I'm guessing (hoping?) one of his parents was somewhere at the autograph pavilion, but in the meantime, I was happy to hand over a few bucks for a prime lot of reprints from the kid's 6/$1 box. 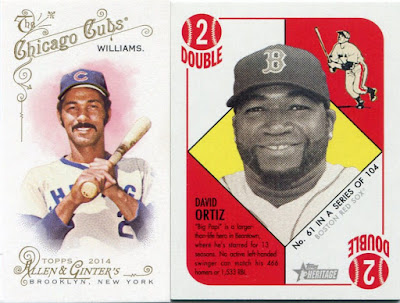 Dime box minis are my kryptonite. 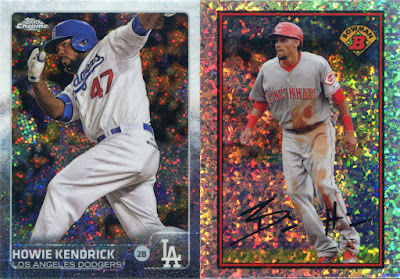 These shinys brought a bit of light to the dark shadows of the convention hall. 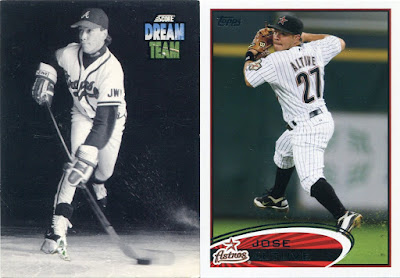 I knocked out a quarter of my Dime Box Dozen list on Friday (you'll see the other in the second installment of my card show mini-series).

The Glavine is an odd baseball/hockey mash-up I somehow didn't already own, and I had the Topps Mini of the Altuve without actually owning the standard base card, which was driving me nuts. 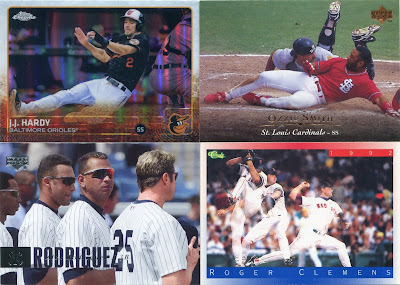 Day or night, there's always some mini-collection damage to be done at card shows.

Once again: my themes win out over my personal feelings, because there's almost no other way I'd voluntarily drop money on cards of A-Rod or Clemens. 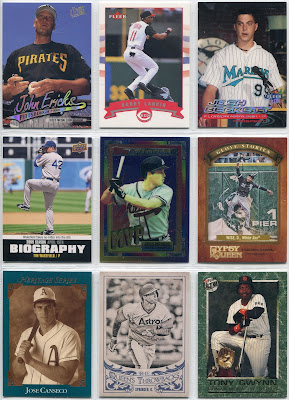 Only upon examining my finds later on Friday night did I notice that Mr. Padre is posing next to a Gold Glove award on that Ultra insert in the bottom-right.

Call it a happy accident. 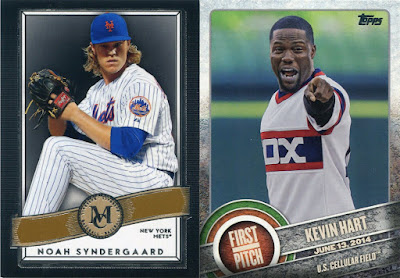 Finding cards from uber-high-end sets like Museum Collection has always been one of the sweetest dime box treats of them all, because a pack of something like that would've cost more than I spent the entire night and been far less fun.

On top of featuring a coveted throwback, the Kevin Hart brings me within one card (Chelsea Handler) of my once half-hearted quest to complete last year's "First Pitch" insert set.

Guess I'll have to ramp up the chase now. 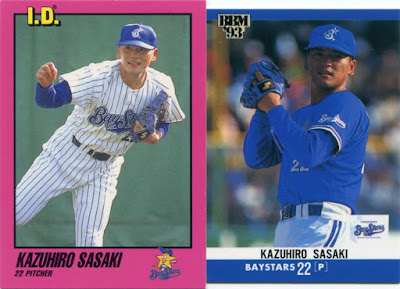 Here's one of the better surprises of the evening.

I own maybe a dozen Japanese baseball cards, at most. A small dollar box I encountered early on in the show added two more to my collection with this pair of early '90s issues of a young Kazuhiro Sasaki.

As you might know, Sasaki would come to the States in 2000 -- seven years after these cards were released -- and become a dominant closer in Seattle for a few years before returning to Japan.

It's fascinating to think about the journey these cards experienced before arriving in my collection. 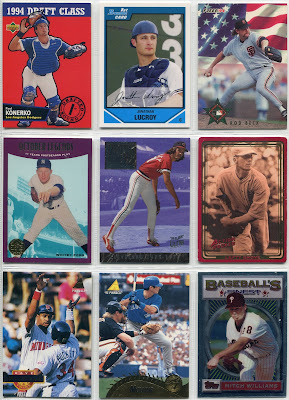 What do these cards have in common?

They all fell out of a nickel box. Yep, a vendor I stumbled upon about midway through the show had several large nickel boxes on display. There was a fair amount of the usual '91 Donruss and '92 Fleer you'd expect, but some deeper digging revealed some real gems to be had. 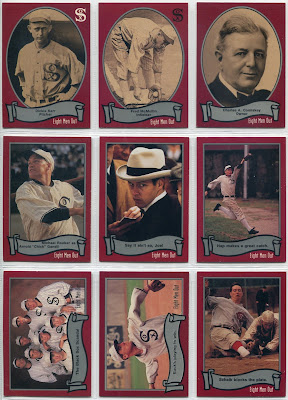 ...and Eight Men Outs comprised the 150 total nickel cards I bought from this vendor, all for a grand total of seven dollars.

I still posit that Eight Men Out is probably the most underrated baseball movie of all-time, and my personal favorite of any baseball film outside of The Sandlot.

Better yet, there's even a full baseball card set to go along with it (though I do wish Topps would get to work on that Rookie of the Year set I've been begging for). 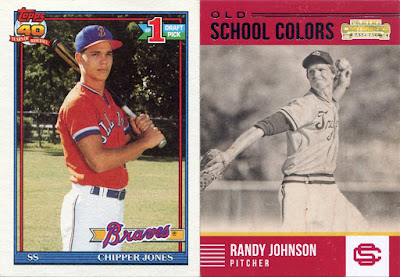 I remember owning a few copies of Chipper's '91 Topps rookie as a young collector, but I must've traded them all for some reason. I corrected that unfortunate mistake by purchasing a new copy from the aforementioned 6/$1 box kid.

Randy Johnson strikes me as perpetually 40 years old, which makes the sight of him as a lanky collegiate at USC quite jarring. 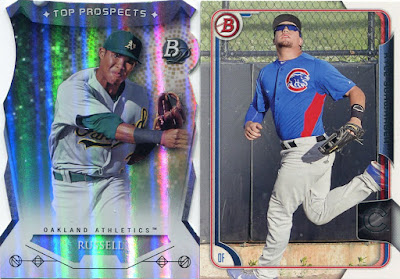 Both of these men from the 2016 World Champion Chicago Cubs (I'll never tire of saying that) were sitting a few hundred feet away from me at the autograph booths when I bought these for a buck per, which I thought was a fair price.

For perspective: the 500-ish cards I bought on Friday after four-plus hours of digging set me back less than an autograph of either Russell or Schwarber would've cost, and that's not even mentioning the hour-plus boredom of waiting in line.

Reason #1 why I've never been a big autograph guy. 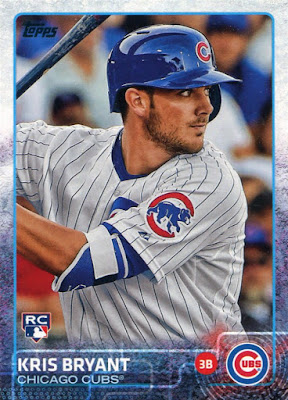 I don't usually spend five bucks on anything that isn't vintage, but I had to make an exception here.

I've been chasing Kris Bryant's 2015 Flagship rookie ever since it hit the streets well over a year ago. I've attended many shows since then and been shut out every single time. Impatience was starting to set in, needless to say.

While $5 was a little more than I was planning to spend, I still figured the tag was reasonable with the hometown inflation local guys command. And that doesn't even take into account Bryant's recent MVP award.

One Lincoln later, and it was finally mine.

I had such a great experience dime boxing at night that I'm considering making Friday my new day of choice for this big show: no need to wake up early, no need to fight for spots at prime tables, no need to worry about other customers beating you to the punch. 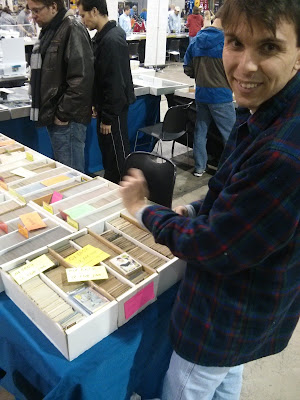 It was a blast!!...looking forward to the rest of the run-down..just don't mention how I tripped and fell on my ass at the show,ha-ha!!!

Ah man, that had to be awesome. I'd love to have a night-time card show. Did you complete the Eight Men Out set? I have 5 or 6 sets, and a couple of unopened boxes.

Great recap! Some really nice cards! Love it when there is a nice variety in the dime boxes! And it's hard to beat a nickle box!

Seriously? A Nickel Box? Man, you guys in Chicagoland sure do know how to do a card show!

A museum collection copper parallel for a dime; you must be living right.