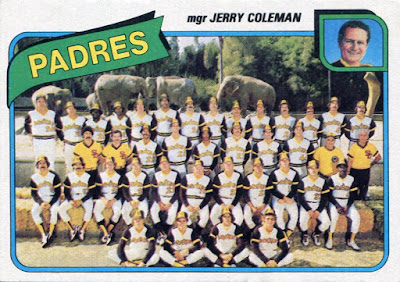 It seems strange to say, but the Padres may be responsible for introducing me to the greatness of the blogosphere.

Many of the people on the forums I prowled in my pre-blog days were your standard highbrow collectors: guys who collected nothing but Red Sox and Yankees, guys who collected nothing but David Ortiz and Derek Jeter. Of course, there's isn't anything wrong with that, but I couldn't help but wonder if all the cards of small-market teams were being thrown into an ocean somewhere.

It wasn't long after I started this blog that I started discovering others. To my surprise, I noticed at least four or five other bloggers ran Padre-centric blogs. I figured if so people were passionate about a relatively unheralded club like the Friars, then there had to be something to this place. (I mean, the Padres do have the only card I've ever seen with elephants, so there's that.)

So, San Diego fans, it's my pleasure to introduce the all-Padre "Short Term Stops" roster this evening. 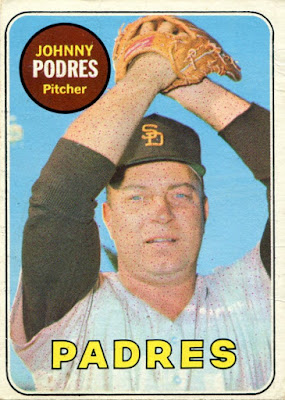 In one of the truly great moments of baseball serendipity, Johnny Podres wound up his career as a San Diego Padre.

Podres was completely out of baseball in 1968 before deciding to join the expansion Padres the following year. The former Dodger World Series hero slogged in what would turn out to be his sunset season, going 5-6 with a 4.31 ERA in 17 games (nine starts) with San Diego.

Statistically, it may not have been the best year, but I think baseball fans everywhere are glad that Johnny Podres was, for a short, glorious time, a Padre. 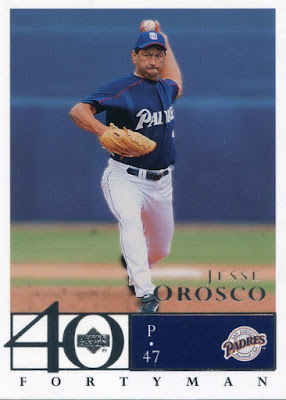 I know it's hyperbole to say, but it sure does seem like Jesse Orosco played forever.

Fact is, he does hold the record for most games pitched: 1,252. A grand total of 42 of those contests came with the 2003 Padres during his 24th and final season in the big leagues. He posted a bloated 7.56 ERA with San Diego, though he did notch the final two of his 144 career saves with the club.

The Padres later sent him to the Yankees, who in turn traded him to the Twins in what would turn out to be a whirlwind of a sunset season for the then-46-year-old (!) reliever.

Part of me is still waiting for Jesse Orosco to come out of retirement and help a club right now. 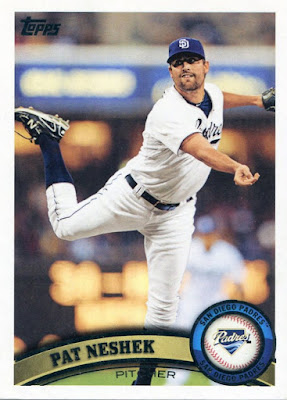 Neshek came out of nowhere to have an All-Star season with the 2014 Cardinals, but before that he was a ho-hum middle reliever with a funky windup who was selected off waivers by the Padres from the Twins in 2011. He posted a 4.01 ERA in 25 contests during his lone year in San Diego.

Neshek recently inked a free-agent deal with the Phillies, and I'll be rooting for him -- and his card collection -- in 2017. 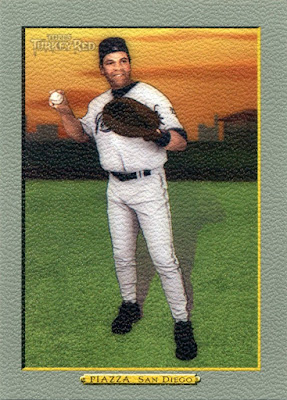 I very nearly chose Sandy Alomar Jr. (who appeared in just nine games with the Padres early in his career) as the backstop for this roster but, in the end, I just couldn't go against Mike Piazza.

Piazza played a relatively full season with the Padres in 2006 and posted some solid numbers with the club. His .283-22-68 line during his lone year in San Diego is nothing to sneeze at, but that sure doesn't make the stint any less unfamiliar. He'd close out his career with an equally-strange stint as an Oakland A the following season.

The now-Hall of Famer is a Dodger to many, a Met to some, but a Padre to almost no one. 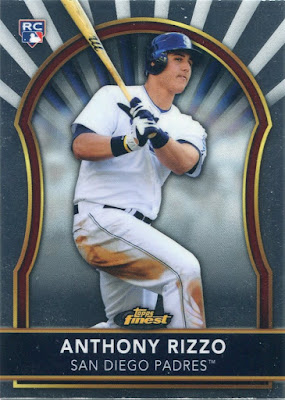 I am eternally grateful that Anthony Rizzo, for lack of a better term, sucked during his brief stint as a Padre.

Had he tore up the league following his late season call-up in 2011, I seriously doubt San Diego would've dealt him to the Cubs for Andrew Cashner the following offseason.

But of course, that didn't happen. Rizzo hit a paltry .141 with all of one homer in 49 games as a rookie, and the Padres felt comfortable choosing Yonder Alonso as their first baseman of the future. We all know the rest: Rizzo has gone on to become a Chicago pillar and my personal favorite player in the game today not named Ichiro.

Thanks for sucking as a Padre, Anthony. 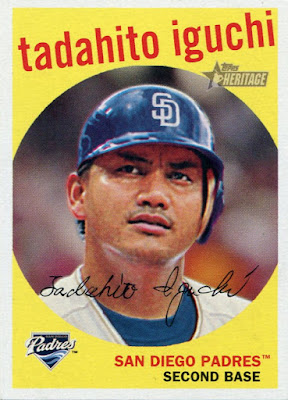 Here's a name I bet you haven't thought about in a while.

As I've mentioned before, I collect most of the guys from the magical 2005 White Sox World Series roster, and Iguchi was the starting second baseman on that club. Sadly, Tad didn't last long in the bigs, posting a .231-2-24 line with the 2008 Padres before being released. (He'd spend the final four games of the season with the Phillies, a team that would go on to win it all that year.)

Iguchi returned to the Japanese League in 2009, and is still playing there to this day at the age of 41. 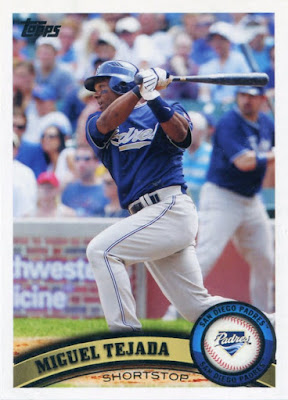 Miguel Tejada had some monster years in the mid-2000s, but he became a well-traveled man towards the end of his career.

After 97 games with the 2010 Orioles, Tejada was dealt to San Diego at the deadline. He'd post a respectable .268-8-32 line in 59 games with the Padres before becoming a free agent at season's end.

Tejada would go on to play for the Giants and Royals before calling it a career in 2013. 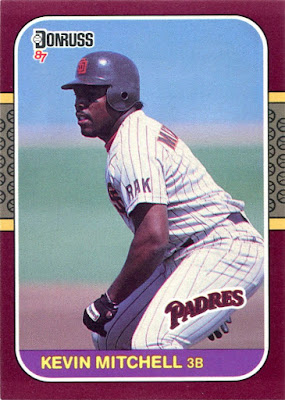 This card sat near the top of my Most Wanted list for a long time.

I wanted it so badly, in fact, that I bought an entire set of '87 Donruss Opening Day at my local flea market for basically the sole purpose of finally tracking Mr. Mitchell down.

Aside from an oddball I've never actually seen before, this is the only solo card I know of that features Mitchell as a Padre (there's a strange Padres-Giants split card from '87 Fleer Update as well, but that one can't go in my Padres binder).

Mitchell hit .245 with seven homers in 62 games for the Padres before being dealt to the Giants in July of that year. He'd go on to have several stellar seasons in San Francisco, including an MVP campaign in 1990.

Not the brightest moment in Padre history. 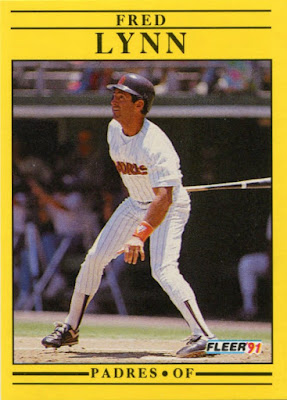 I identify Fred Lynn as a strictly 1970s ballplayer, so I have a tough time wrapping my head around the fact that he retired in 1990.

Lynn spent the final season of his sensational career in San Diego, hitting the final six of his 306 career homers to go along with a .240 average in 90 games as a Padre.

It's sometimes hard to believe Fred Lynn played long enough to be featured on this quirky '91 Fleer design, but he did. 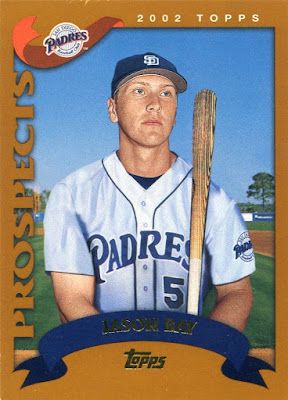 Jason Bay's journey was anything but conventional before he became the NL Rookie of the Year with the Pirates in 2004.

After being a 22nd round draft pick of the Expos in 2000, Montreal dealt Bay to the Mets before he ever suited up for the Expos. The Mets followed suit by sending Bay to the Padres in 2002 without ever playing in a game for New York.

Bay's Padre tenure lasted all of three games (where he'd hit the first of his 222 career homers) before he was again dealt, this time to the Pirates, where he'd enjoy several fine seasons as well as the aforementioned 2004 NL ROY campaign.

Those three games earned him the honor of being the shortest-tenured member of this Padres roster. 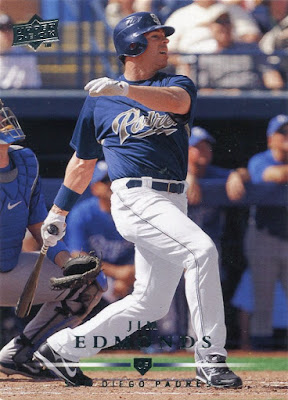 While not a move of Rizzo-esque proportions, the Padres did unwittingly help out the Cubs by releasing Jim Edmonds early in the 2008 season.

Edmonds was awful in his 26 games in San Diego, hitting .178 with just one homer during that span. The Padres chalked him up as over-the-hill and gave him his release papers. The Cubs took a chance on Edmonds, a decision made a whole lot easier by the fact that San Diego paid the vast majority of his $8 million salary.

As well as providing some much-needed veteran leadership on a playoff-bound 2008 roster, Edmonds would hit 19 homers down the stretch for the Cubs and show the Padres that he was anything but done.

Once again: we owe you one, San Diego.

That just about does it for this edition of "Short Term Stops."

As usual, thanks for tuning in!
Posted by Nick at 6:00 PM

Great post, if not a little depressing for a San Diego fan such as myself.

Glad I'm not the only Padres fan that found this post slightly depressing. Great job though. There were a few that I never knew about (Bay & Podres)... and a few I was still hoping to forget (Mitchell and Rizzo).

It has been said that every bettor needs to see this,

Watch this or stop placing bets on sports...