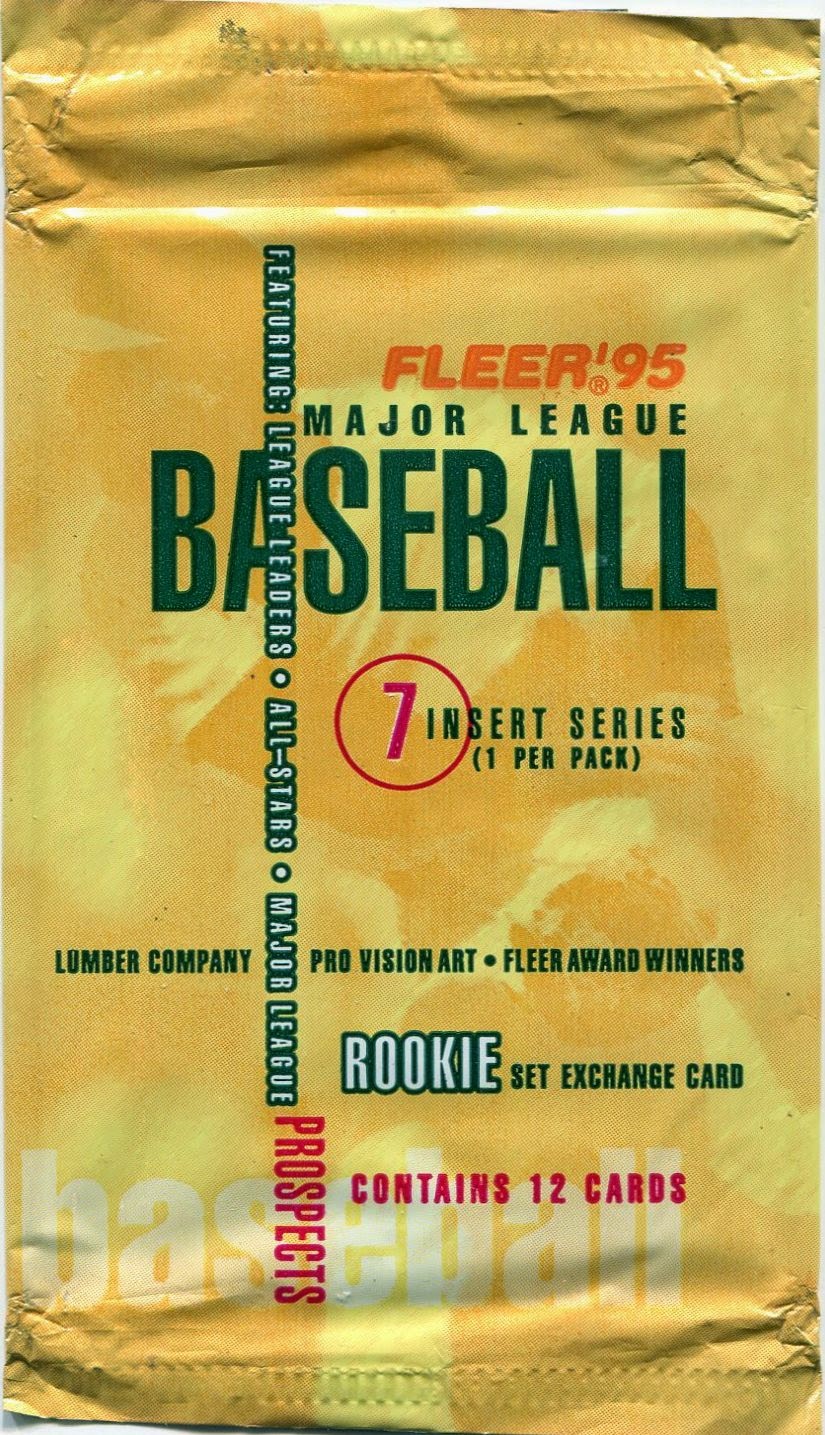 Though I had an immense amount of fun digging through the Junior Junkie's mega-box a couple weeks ago, I saved one extra-special item for last.

The unfamiliar beige color of one particular unopened pack T. J. sent along didn't ring a bell with me at first. Imagine my surprise when I took a closer look at the wrapper.

My love for '95 Fleer has unwittingly become kind of a running theme throughout this blog's history. It is, I think, the most polarizing set ever made. You either love it with all your heart or hate it with every fiber of your being. There isn't much middle ground.

I'm proud to admit that I'm part of the former. I know T. J. is as well. And, well, that might be it. We '95 Fleer lovers are vastly outnumbered, but I'm fine with that.

I've found stacks and stacks of cards from this set from dime boxes over the years. Other bloggers have been nice enough to send a healthy amount of singles my way as well. Before this box, though, I'd never opened (or seen, for that matter) a pack of the stuff.

I find it funny that Fleer chose a muted color like beige for the fronts of these wrappers.

It left you so unprepared for what was actually inside. 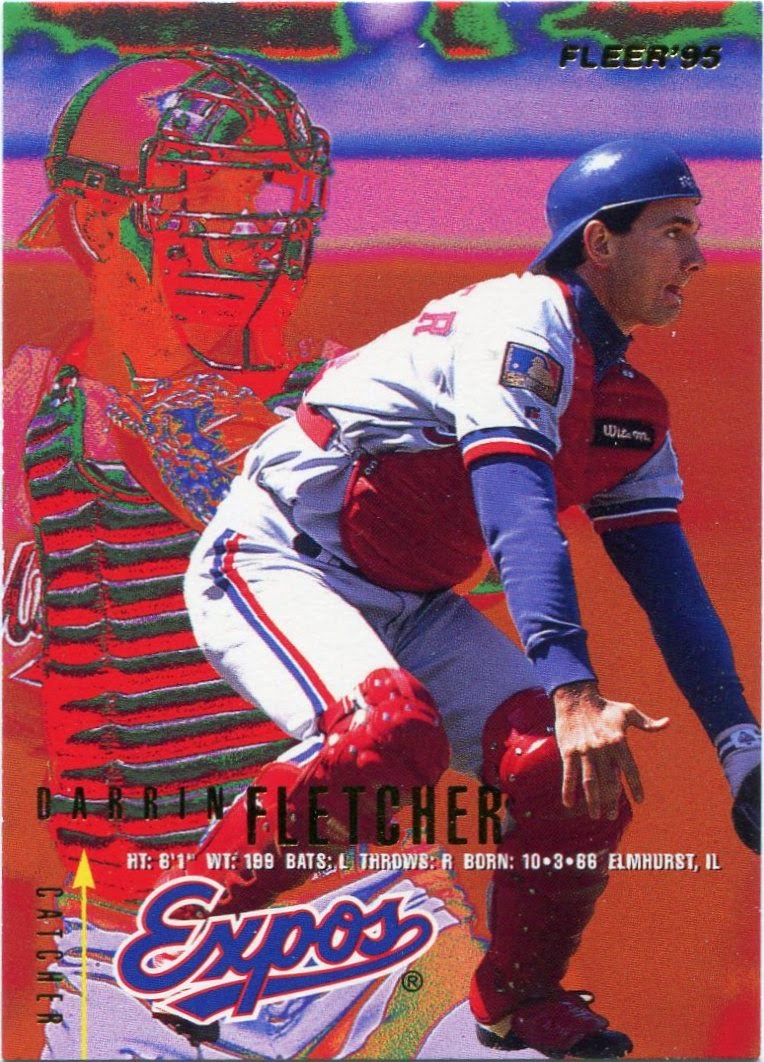 I can only imagine what collectors in 1995 thought when they opened a seemingly innocent pack and this.

Cards that, for lack of a better term, look like they were designed on acid. I've come to unofficially designate it as the "LSD set" for this very reason.

As you might already know, there are a handful of different wild designs within the 1995 Fleer base set.

At first, I thought they were assigned to each individual player at random. Soon after starting this blog, however, I found out that there was a method to Fleer's madness. The design is actually based on the division of the team featured on the front.

Since the Expos are, er, were in the NL East, Darrin Fletcher was given that eye-popping infrared setup. 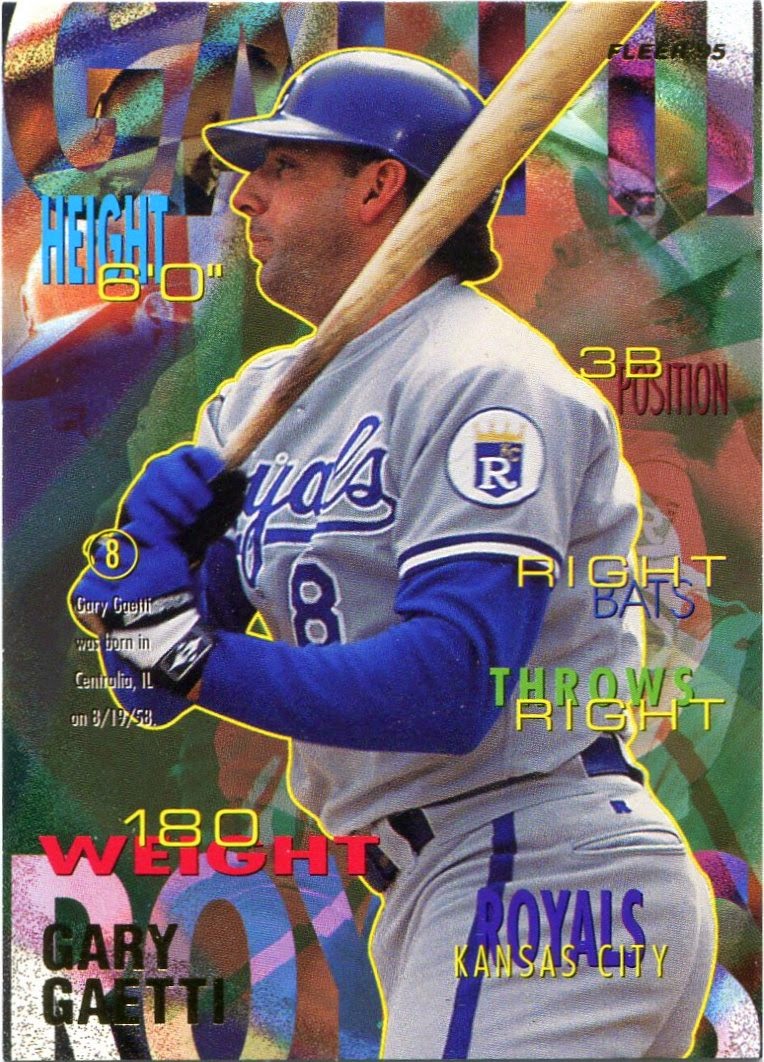 Mr. Gaetti and all his fellow AL Central companions, on the other hand, received this demented rainbow design.

The sheer craziness of this set is surprising considering that Fleer's 1994 and '96 efforts are two of the most toned-down designs in history.

I guess we'll never know exactly what was going on at Fleer headquarters in 1995. 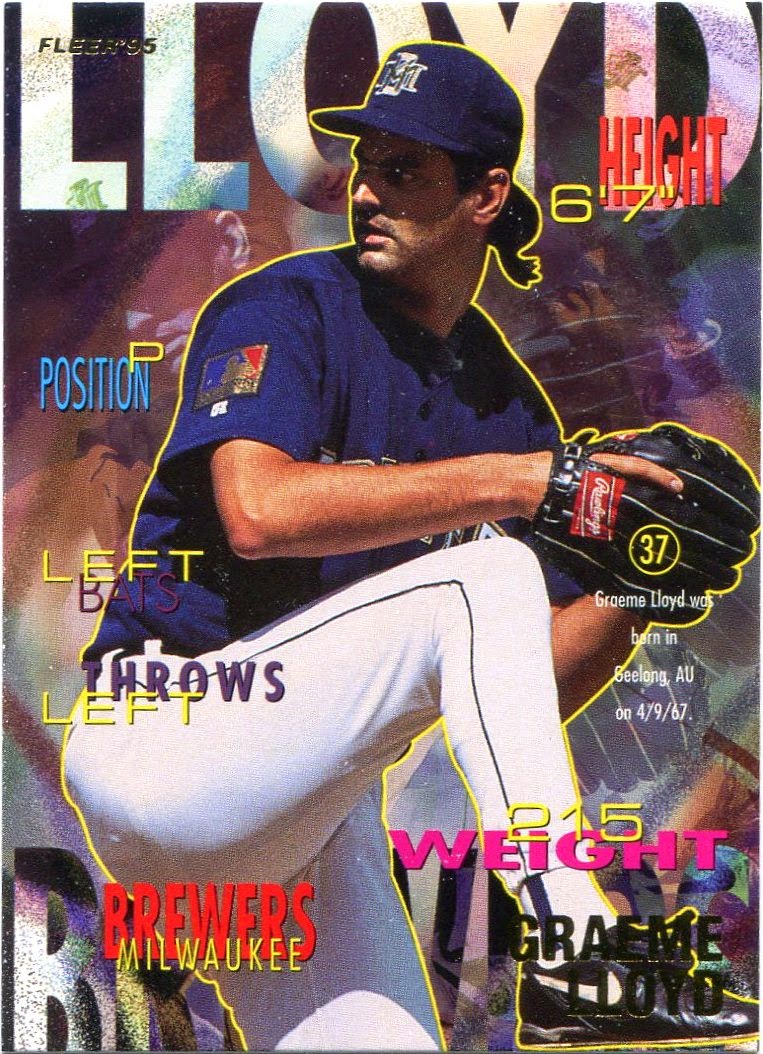 It's hard for me to remember, but the Brewers were once in the AL Central.

To most older collectors, I'm sure the Brew Crew will always be an American League team. Since I started getting into baseball in the late '90s, however, they've always been a National League squad to me.

Another striking aspect of '95 Fleer is the fact that it includes stats such as height, weight, and birthplace on the fronts of the cards. Those, of course, are usually relegated to the back.

A quick look at the front of this one will tell you that Graeme Lloyd is one of the few big league players born in Australia.

He also helped touch off one of the biggest brawls in history. 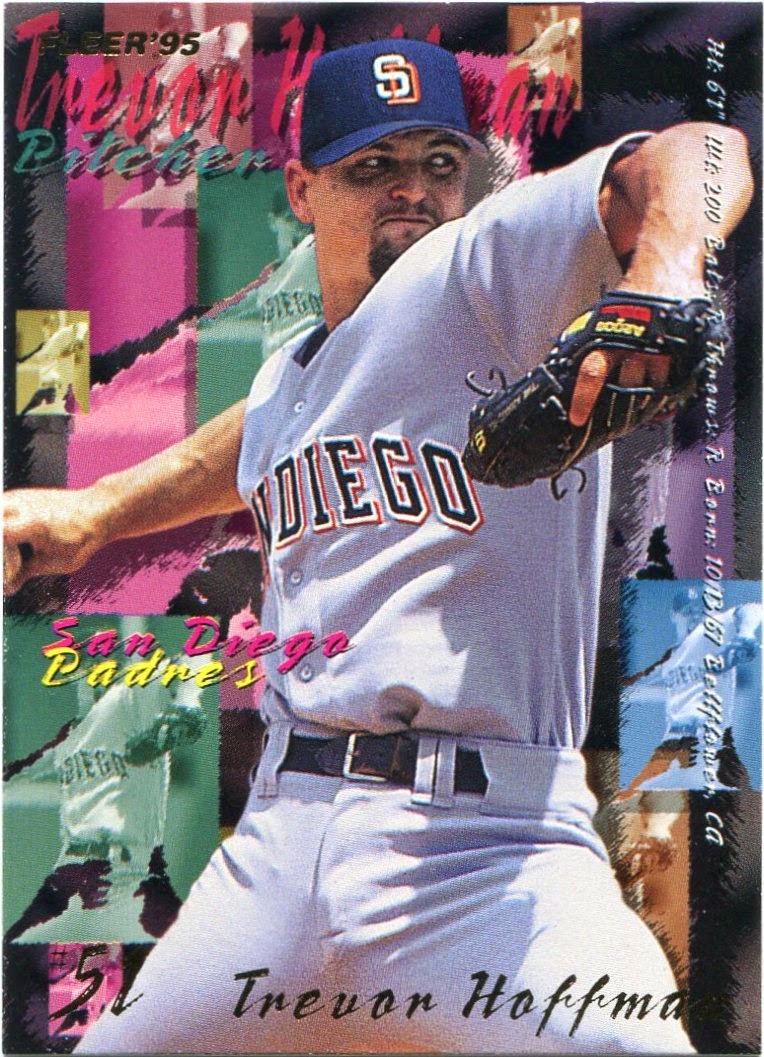 I don't know if Trevor Hoffman was viewed as a star in 1995, but he was certainly on his way.

Something about this design reminds me of that Hall of Mirrors thing they always used to set up at carnivals around here. 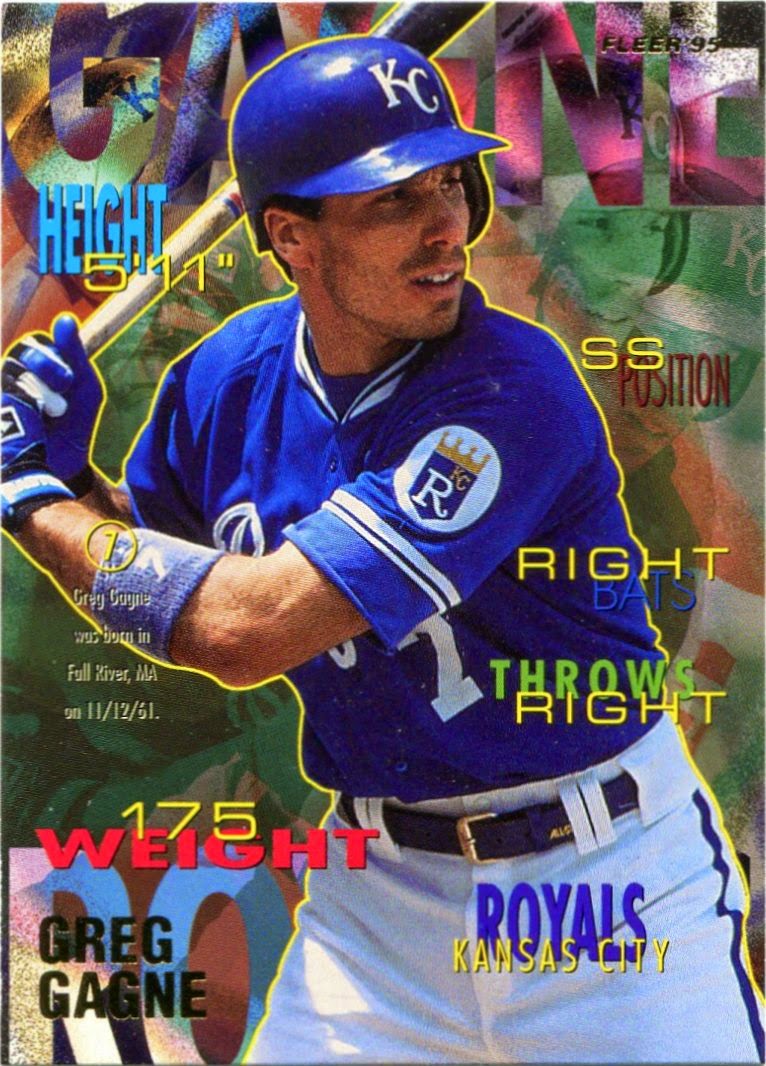 You might remember former closer Eric Gagne pronouncing his last name as gahn-YAY.

So, this must be Greg gahn-YAY, right? Nope. For whatever reason, he pronounced it GAG-nee. 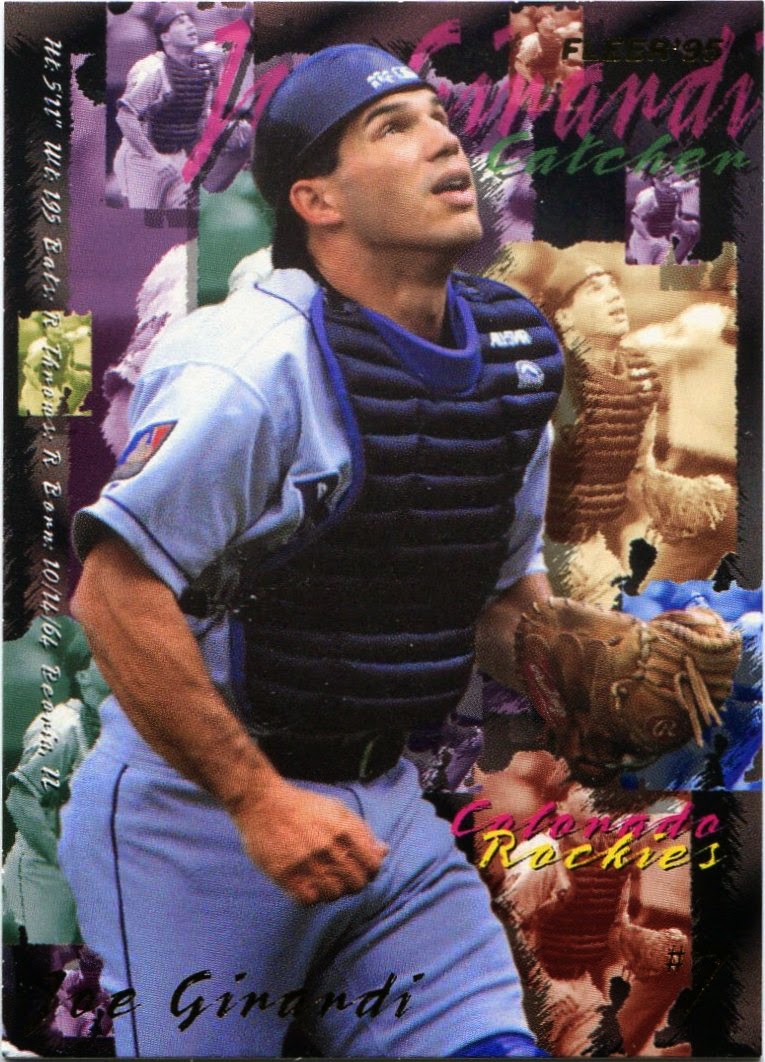 Another one from the Hall of Mirrors design.

I wonder if people saw Joe Girardi as future manager material back in 1995. 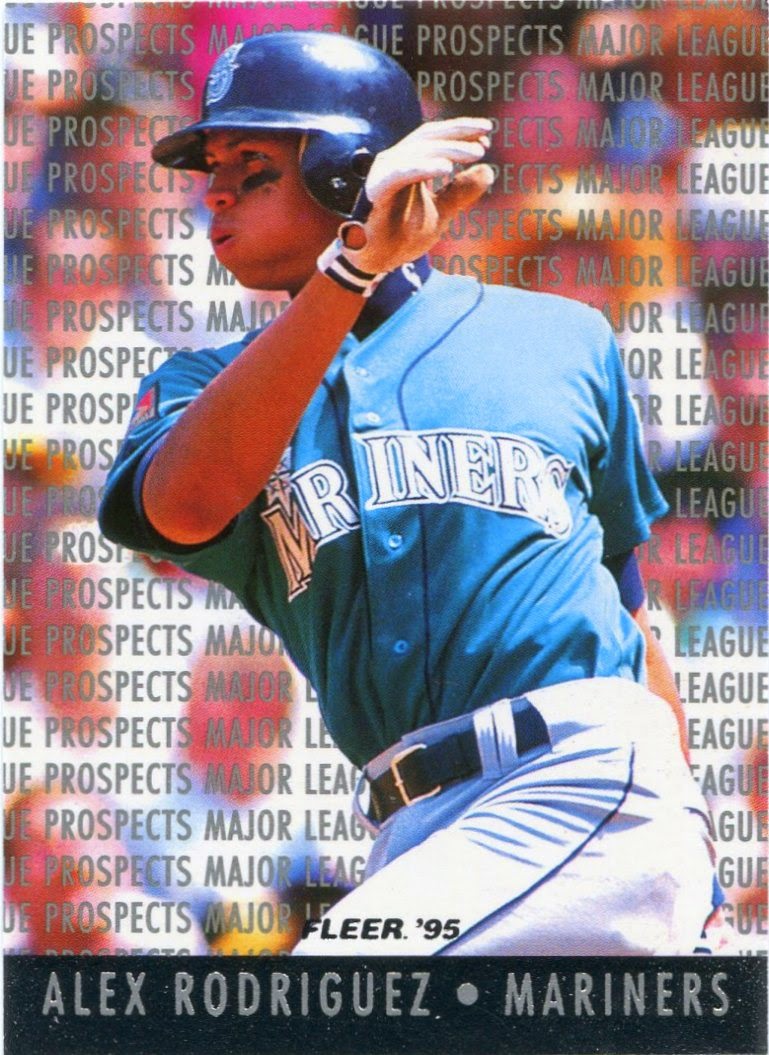 It's funny that the inserts are actually the most muted cards from this entire set. 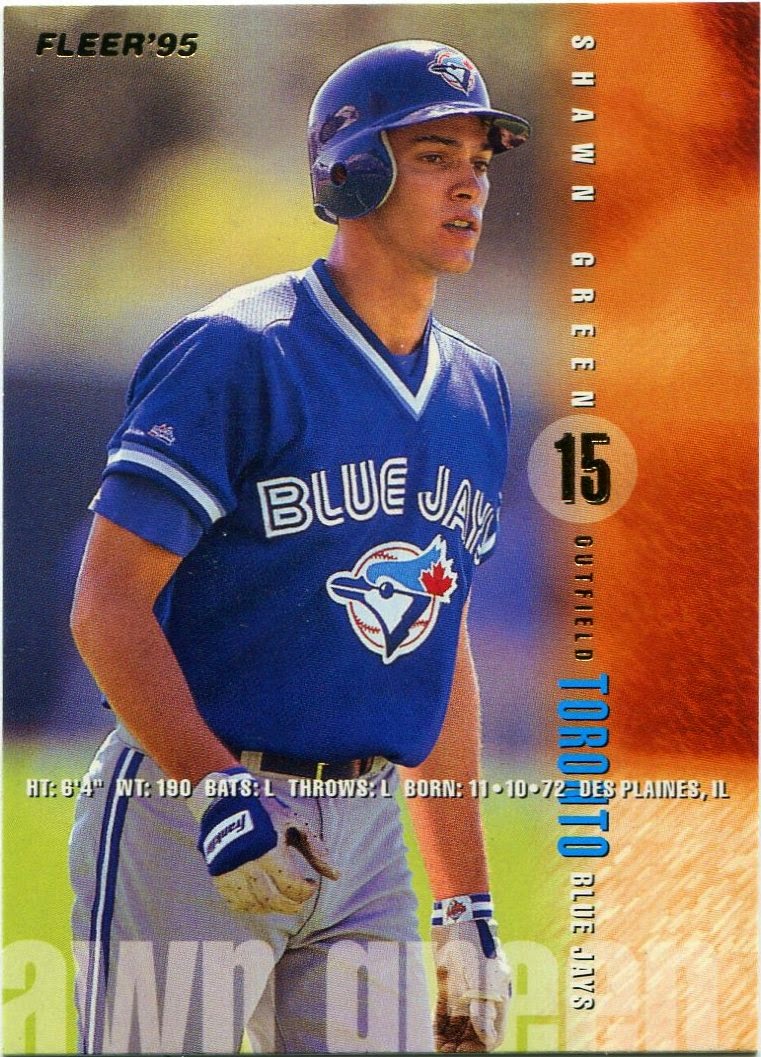 The AL East look might actually be the sanest of the six designs.

This. A card with random hues of orange and red. A card with horizontal and vertical lines of stats strewn all over the place. The most normal. 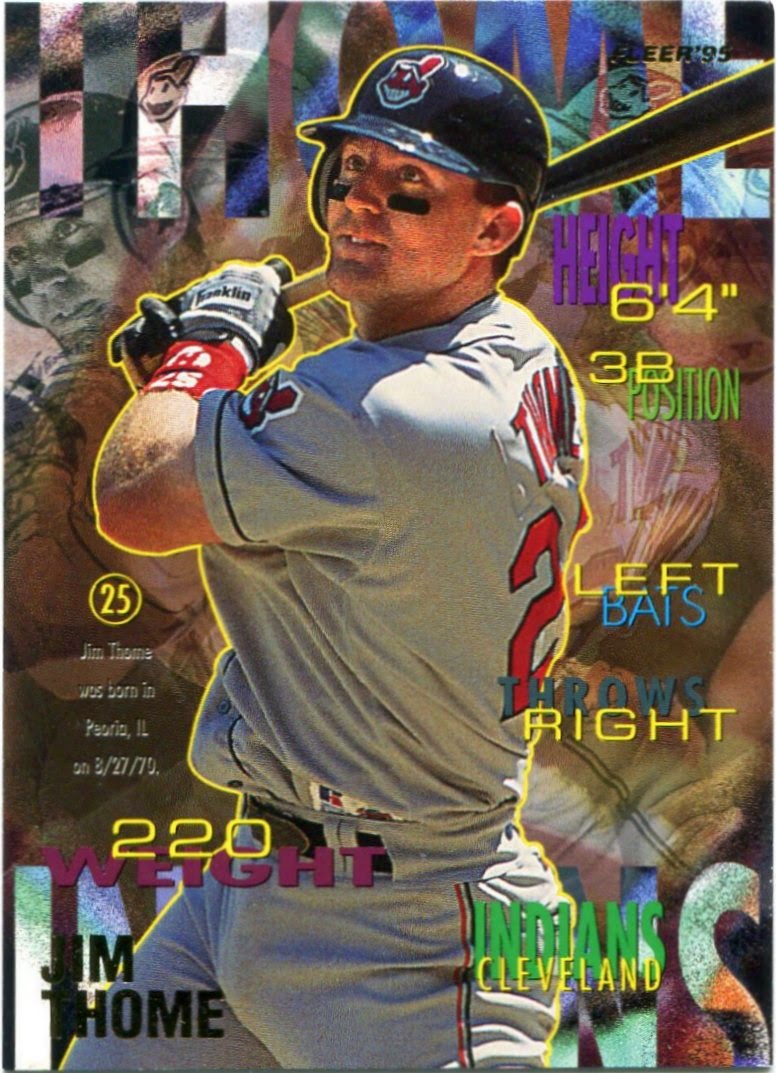 Jim Thome was coming off his first big season in 1994, hitting 20 homers in just 98 games that year.

We catch him right at the beginning of his stardom here. 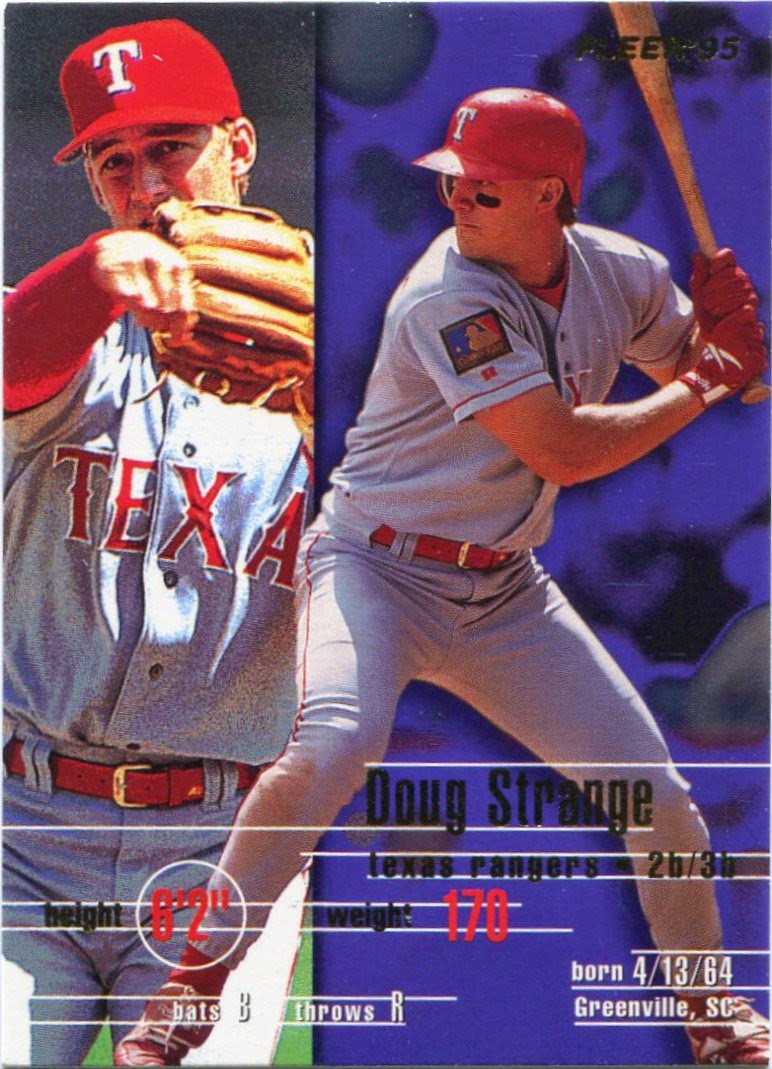 The Texas Rangers were actually leading the AL West when the strike hit in '94.

Like the NL East, this design has a bit of that infrared thing going as well, only it's an eerie shade of bluish-purple this time.

Kind of seems like something you'd see out of The Blob. 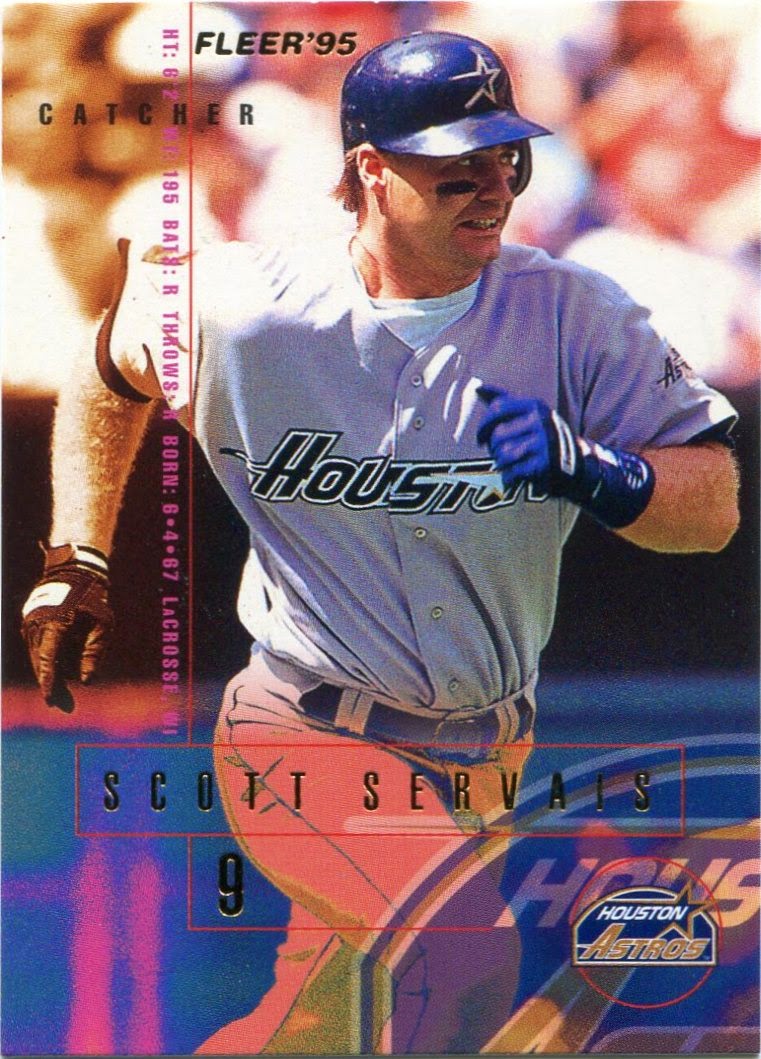 All six divisions accounted for. Scott Servais was the lone NL Central representative in this pack. Of course, he'd show up in that rainbow-like AL Central design if this set were made in 2014.

Although the bottom bluish half of it does kind of make Servais look like he's about to drown. 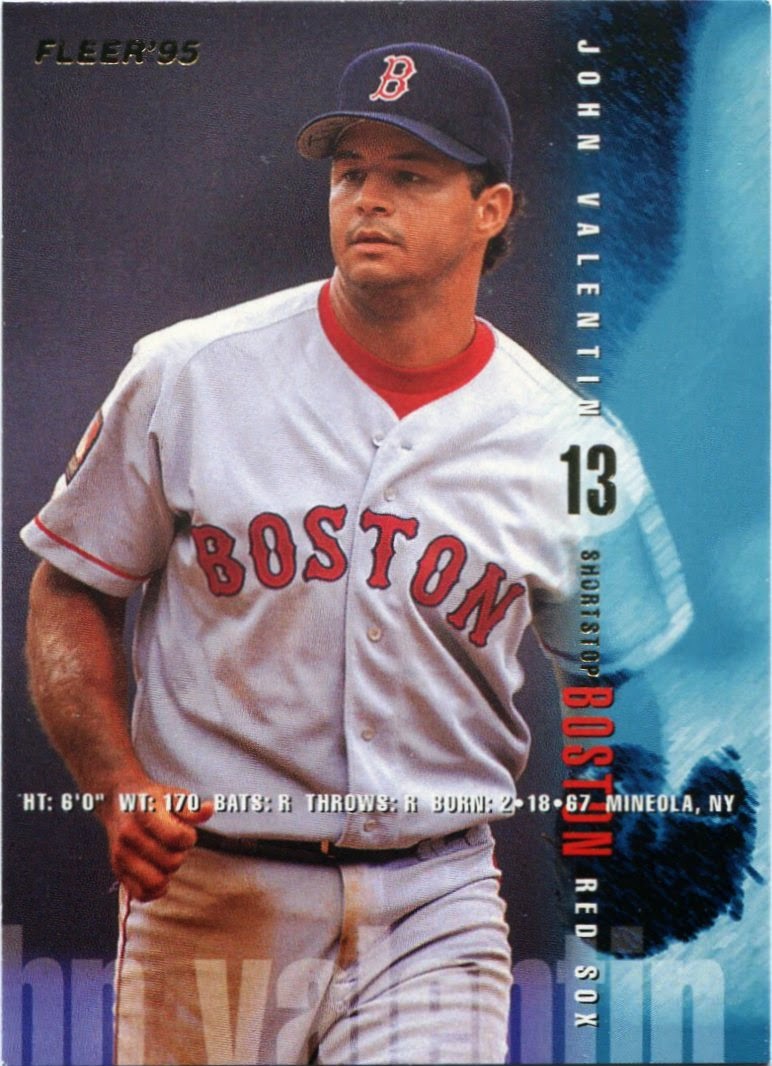 The pack closes out with our second AL East representative, this time with an icy shade of blue dominating the front.

Let's call it the Igloo design.

Sadly, that brings the craziest pack of baseball cards I've ever opened to a far-too-sudden end.

It's mind-boggling to think of a set like this ever being on the shelves. I mean, could you imagine what would happen if something like 1995 Fleer came out today?

The only explanation I have for the craziness of it is that Fleer was simply trying to get people's attention in 1995. The hobby (and the game, of course) wasn't on its strongest legs after the embarrassing 1994 player's strike.

I think Fleer just tried to make the most attention-grabbing set possible. That's just my theory.

I'm not sure if it worked back in 1995, as I wasn't collecting then. But it's certainly sucked me in during my years in this hobby.

Random hues of orange and red. Perfect for the Blue Jays.

This set is completely bananas, but really does have a certain charm, doesn't it?

I used to be a hater, but you made a believer out of me !

I found three packs in a quarter bin at the monthly card show. I opened two but knew you had to have a taste, too. That A-Rod is far and away the best card come out of the three packs.

Wow Those were some flashy cards indeed!

I've been toying with writing a post about 1995 in general... For a guy like me with "less is more" sensibilities, 1995 was very likely THE WORST year in baseball card history... it's not just Fleer, everybody was very much in "LOOK AT ME!" mode.

You refer to 95F as the "LSD" set. I think of it as the "WTF?" set, because that's what I said when I opened my one and only pack... and BTW, I shuddered when I saw the wrapper at the top of the post.

1995 Fleer grabbed a lot of attention back in the day, but not in a good way. It pretty much polarized people from the start, and got a lot of negative press.