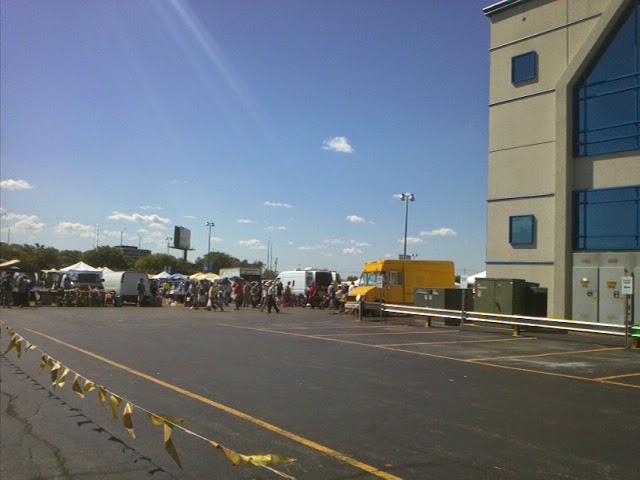 The flea market has been calling my name these past couple months.

Thankfully, the stars finally aligned this past Sunday. I was able to scrounge up enough cash to make the trip on what turned out to be a beautiful afternoon.

I had the idea to take a few pictures of the place for the blog. Make it come to life a bit. Just in case, you know, some of you still think I'm making all this up. (Although I wouldn't blame you if you do.)

I snapped this photo which, sadly, isn't a very good one. It doesn't even begin to show how huge my local flea market is. All you get here are the outskirts. (This is a way better shot.)

The excitement of the place got to me after a while, and I almost completely forgot to get any other shots during the rest of the afternoon. I did manage take one more important photo, which you'll see in a bit.

This place is kind of like heaven on earth, even if my shots don't exactly show it. 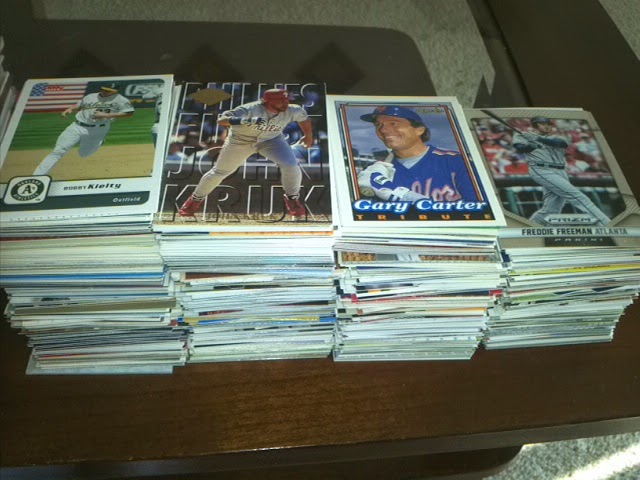 But enough about my horrible photography skills.

Let's get to the cards, people!

It's become sort of a tradition this year to get a shot of my day's finds after each flea market binge, all piled up next to one another. Whether they be keepsies or items I picked out for other bloggers, you're seeing the nearly 700 total cards I came home with on Sunday right there.

That's less than a nickel each. 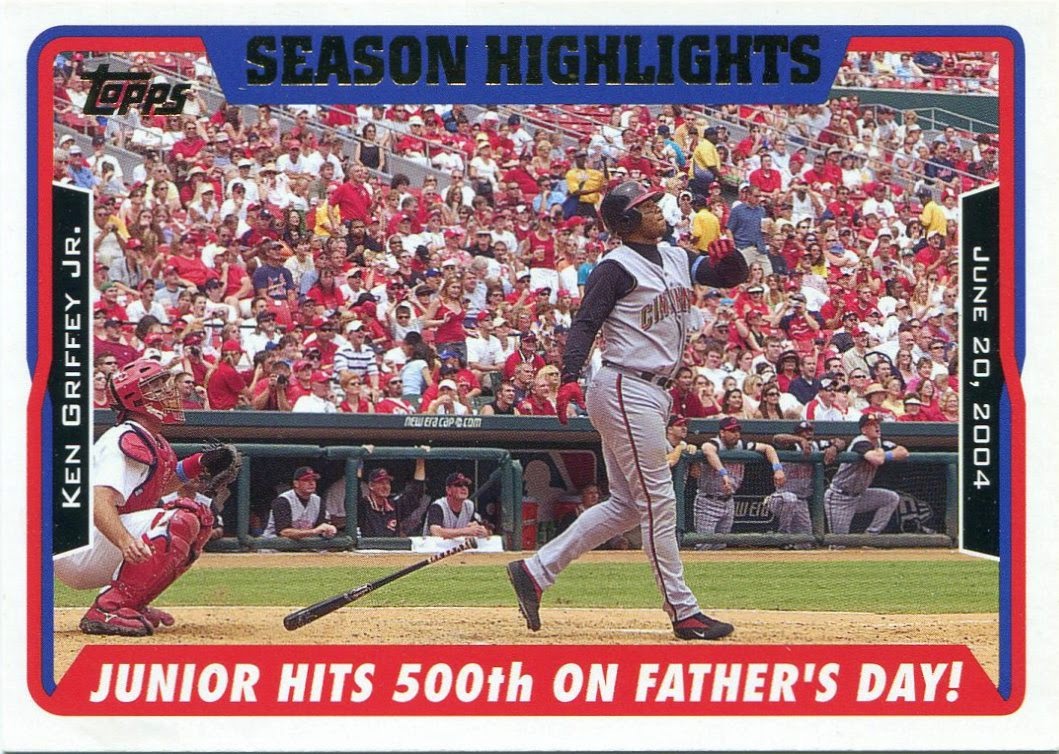 Three of those thirty bucks, as it happens, were spent on nine-pocket pages.

I told one particular vendor the last time I attended that I'd buy any extra pages he had. Since then, however, I've received a ton of pages from a few ever-generous bloggers. One can never have too many pages, but I think I'm set for a while now.

Still, I didn't want to back out on my promise. The guy specifically brought pages for me on Sunday, and, although I didn't exactly need them, I didn't mind forking over three bucks for about forty pages. They were the good stuff, too. Ultra-Pro.

After I took the pages off his hands, I made a quick dig through the guy's dime boxes. As I've mentioned before, this particular vendor doesn't get a whole lot of new cards in from week to week, but I still manage to find a few new pieces I can use with each passing trip.

I know I used to have a copy of this superb Season Highlights Griffey, but I don't exactly know what happened to it. My stupid teenage self probably traded it away at some point.

Finding it again was like reclaiming a lost piece of my collection. 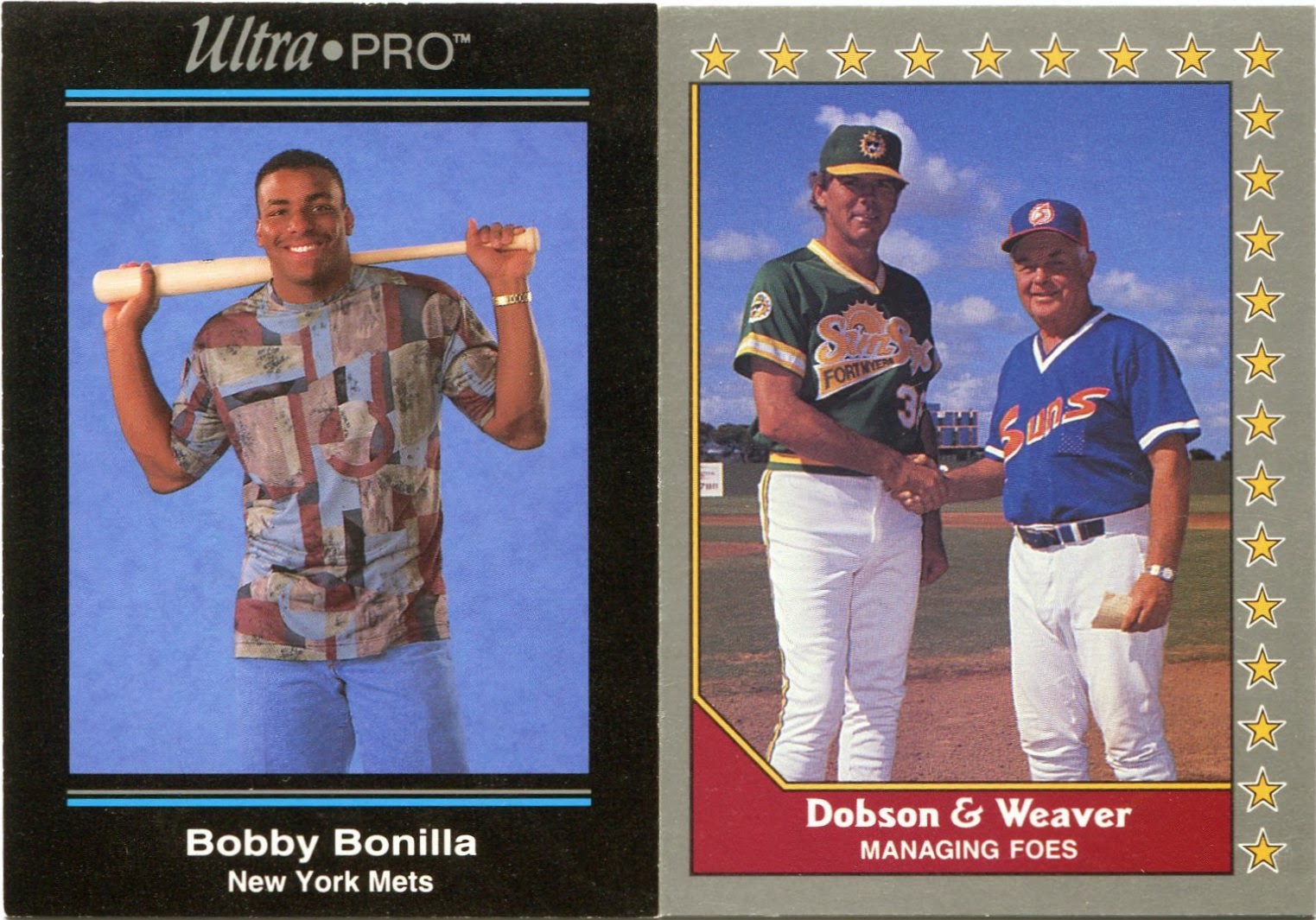 A couple other fun dimers.

Could a card get any more '90s than that Bonilla? 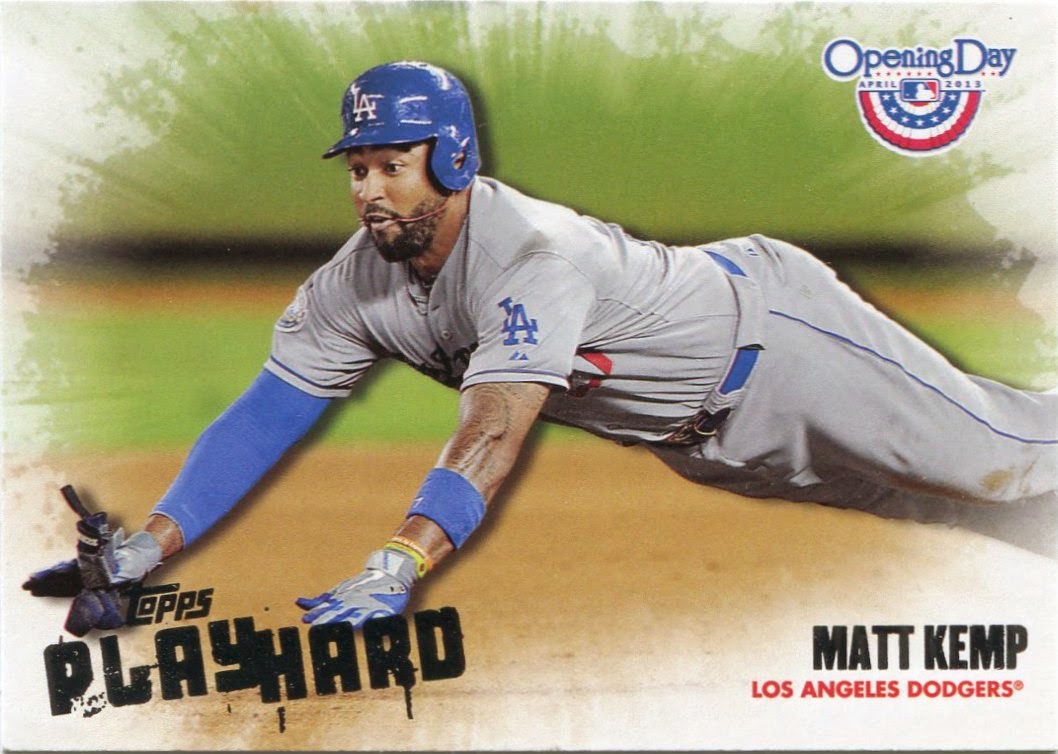 The guy also had a few quarter cards off to the side.

I didn't find much, but this "Play Hard" insert from last year's Opening Day is a fine addition to my rapidly expanding Matt Kemp collection.

Between the pages and the cards, I dropped a grand total of five bucks at this guy's table. 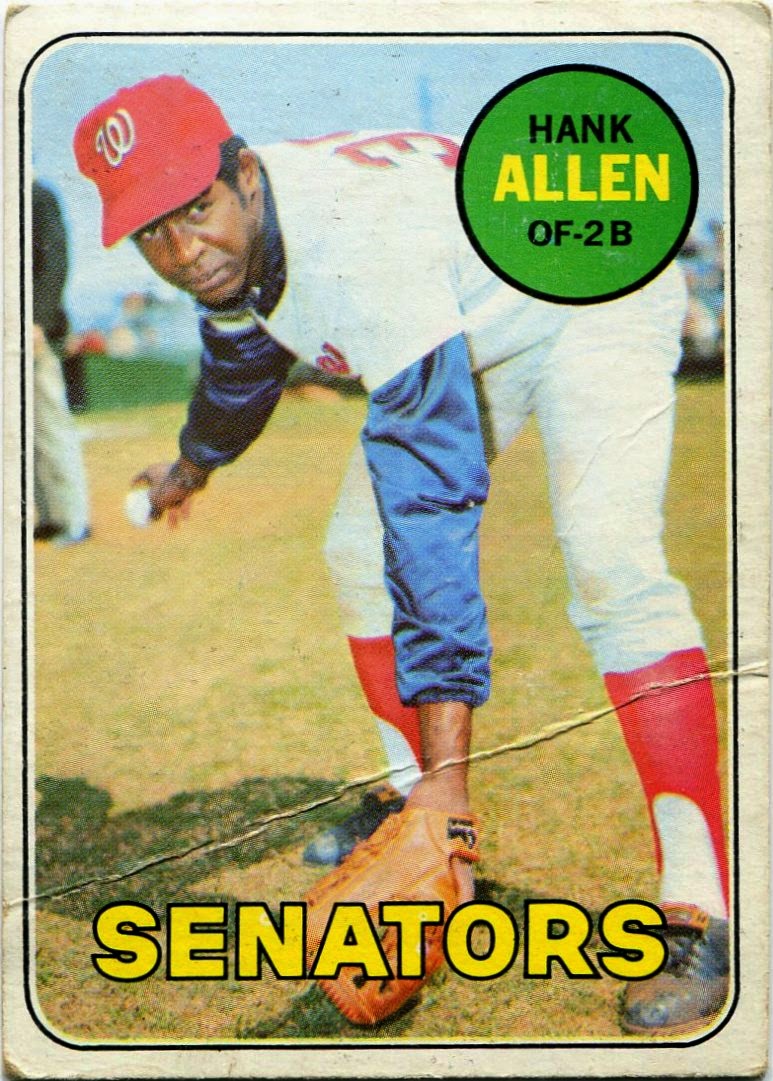 I found another familiar vendor a few aisles later.

He's new to the place this year, as far as I can tell. His quarter cards kicked off my flea market season back in April, and he's been back with new selections of cardboard every time I've hit his table.

For twenty cents, I'll take as many old Senators as I can find. 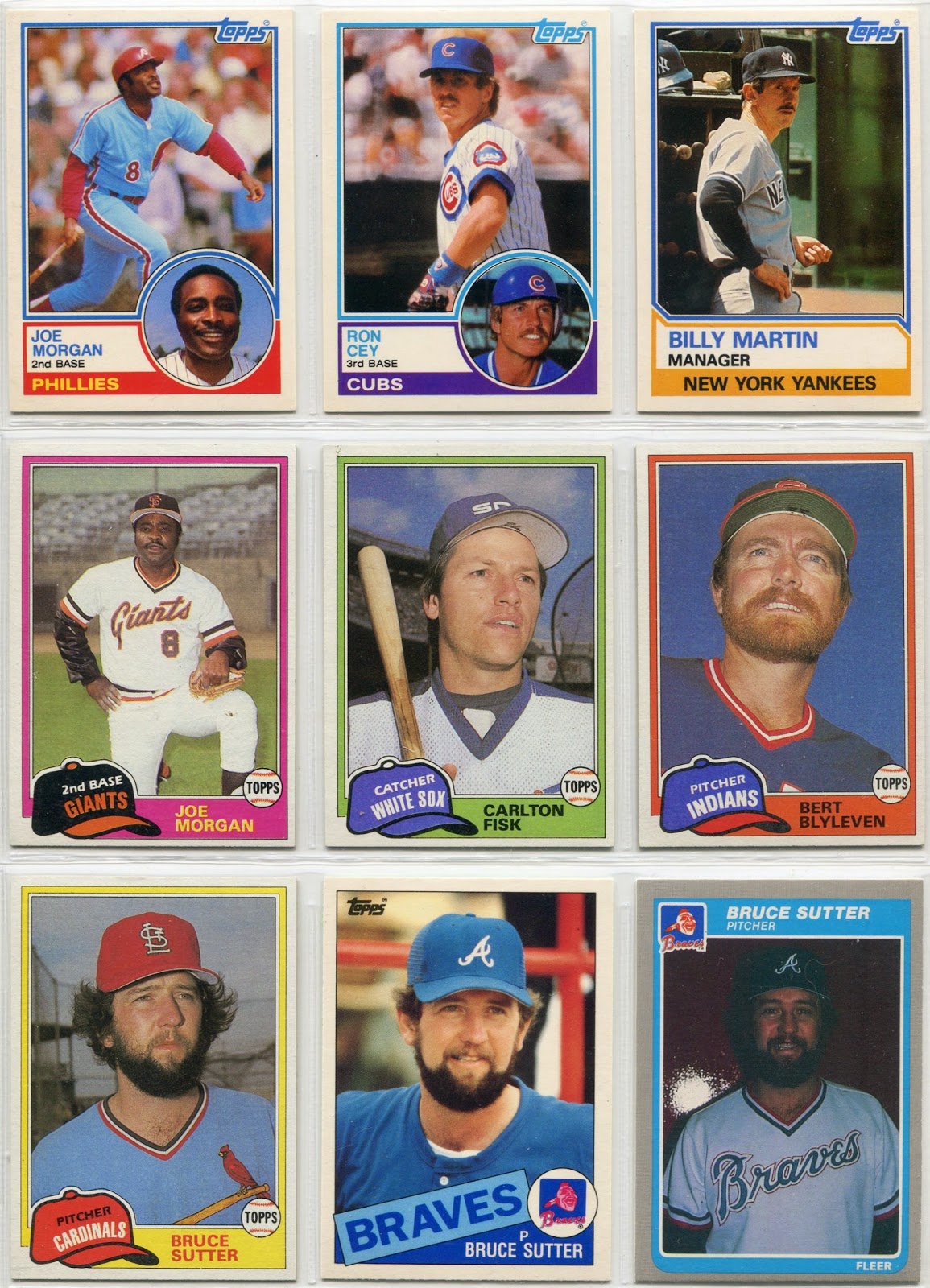 I ended up with about forty cards from the 5/$1 box after all was said and done.

What impressed me most was the selection of tough early-to-mid '80s Topps Traded singles the guy had on display. Big names, too. Morgan. Fisk. Sutter.

I rarely see these at card shows, much less flea markets. 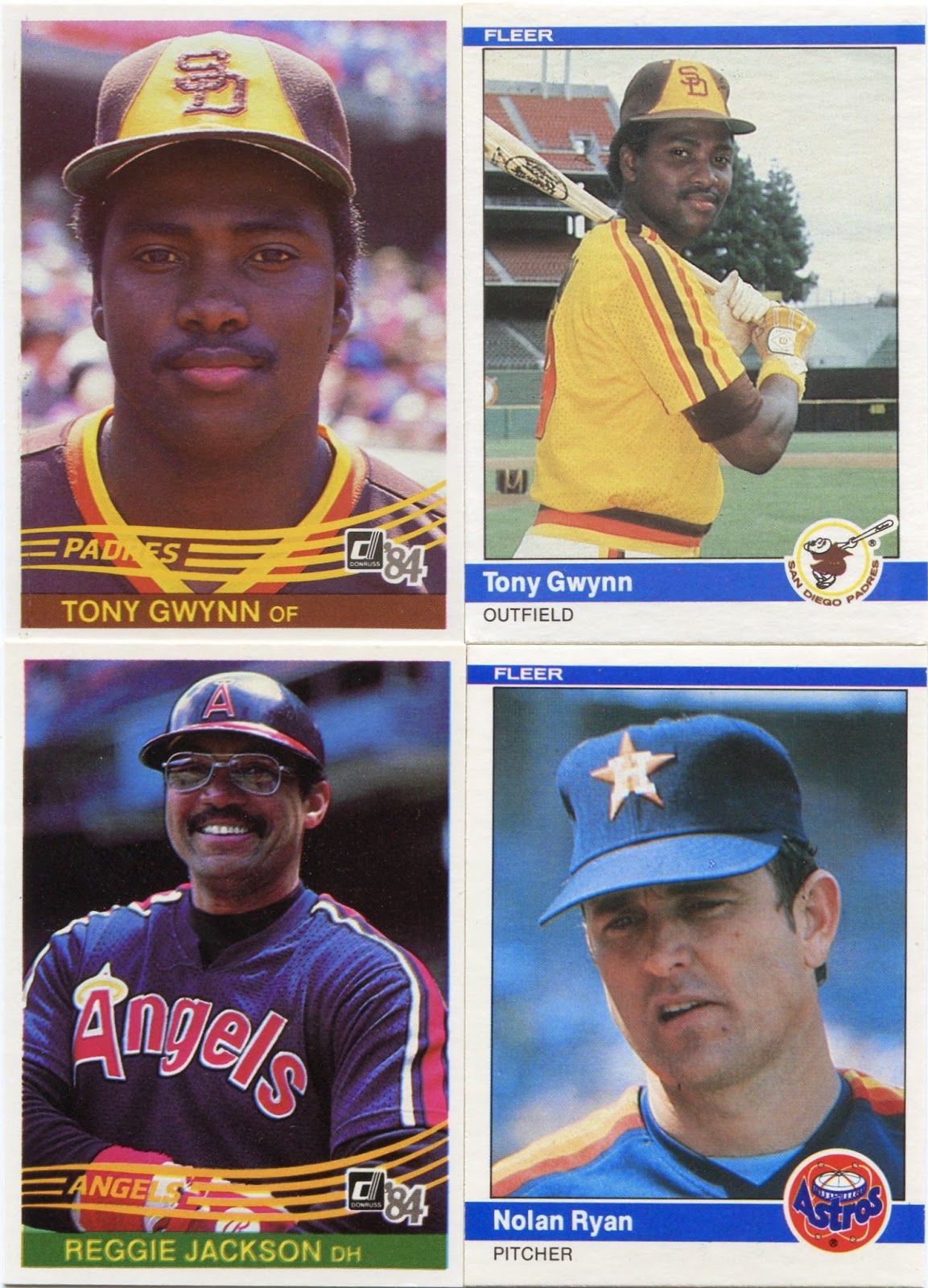 The guy also had a few cards in another part of the box that I mistakenly thought were part of the 5/$1 bargain.

He told me they were priced as marked when I went to pay for everything. But, being a regular customer and all, he was willing to cut me a deal. He offered me the forty-ish 5/$1 cards and the six or so other individually-priced items I'd picked out for ten bucks total.

And I passed. I told him I'd just take the forty 5/$1 singles for eight dollars. The others went back in the box.

I fished a ten out of my wallet. The vendor pulled two singles from his pocket. My change. I had a deep moment of introspection as I handed the guy my ten.

You're SERIOUSLY gonna pass on Reggie, Nolan, and a pair of second-year Gwynns all because you don't want to spend TWO EXTRA DOLLARS?! Get it together, stupid!

After my internal rage died down, I told the guy I'd take the extras after all and had him keep the ten. 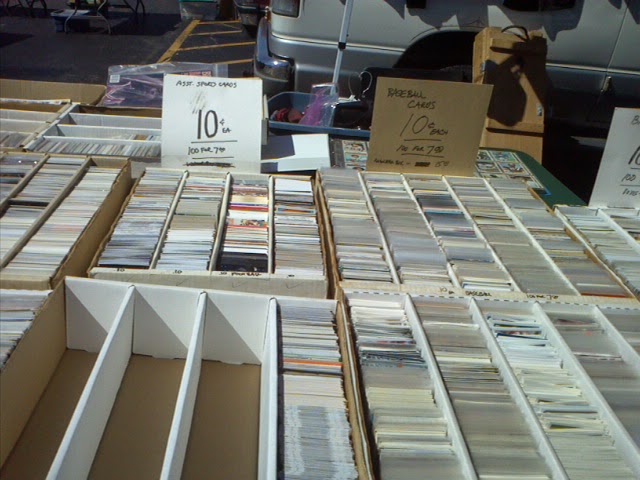 I don't know what else I can say about this next legendary vendor that hasn't already been said. The guy has an unbelievable array of cards out every week, and he always cuts me an unthinkable deal.

And, though I've been meaning to do so during my past couple trips, I finally got a picture of the guy's dime boxes on Sunday. Again, just in case you didn't believe me. You've got the "10¢" markings right there, for the remaining few dime box non-believers.

The box beneath the white sign was actually comprised of football cards. The two 3200-count boxes below the brown cardboard sign, however, were all baseball. And, while you can't see them here, there were two more baseball 3200-counters next to those.

Yes, I looked through every single one. 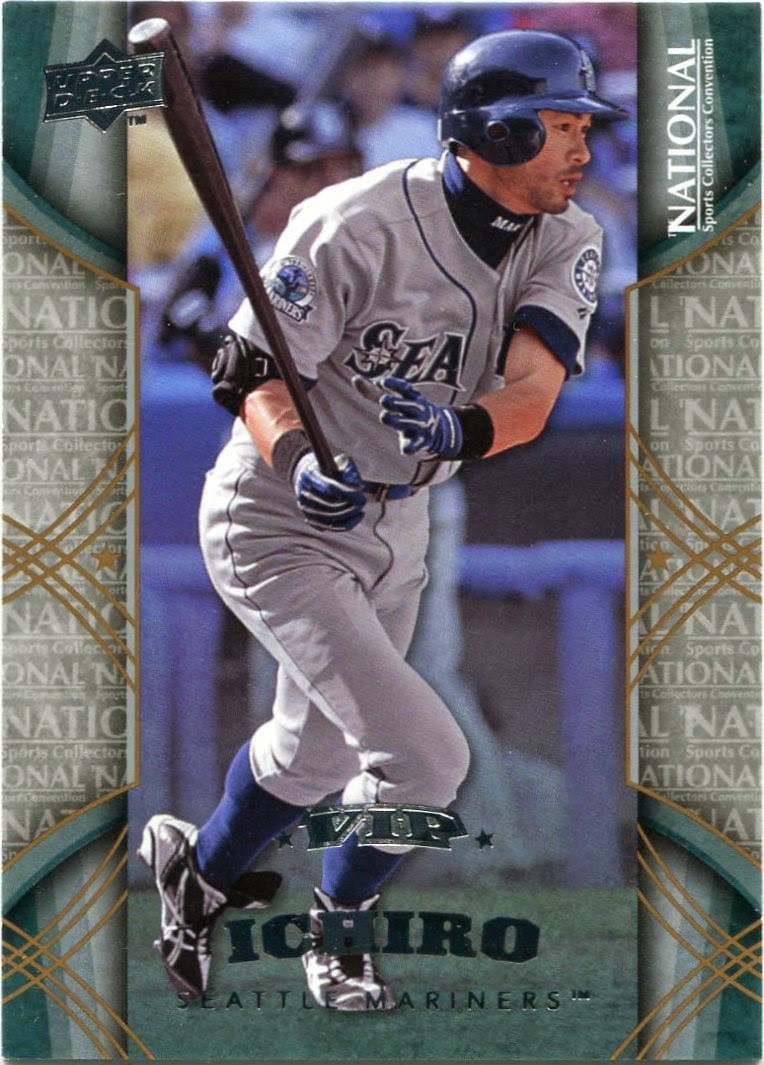 And that's not even counting the four smaller boxes of quarter cards the guy had, either.

I didn't dig through them as thoroughly, but they amounted to easily another thousand cards to peruse right there. (Stupid old me forgot to take a picture of them in my haste. I was still drooling over the dime boxes.)

I only came away with about 25 quarter cards, but I tried to make each and every one of them count.

Among the best of the best was this rare Ichiro oddball, a VIP giveaway at the National way back in 2008. 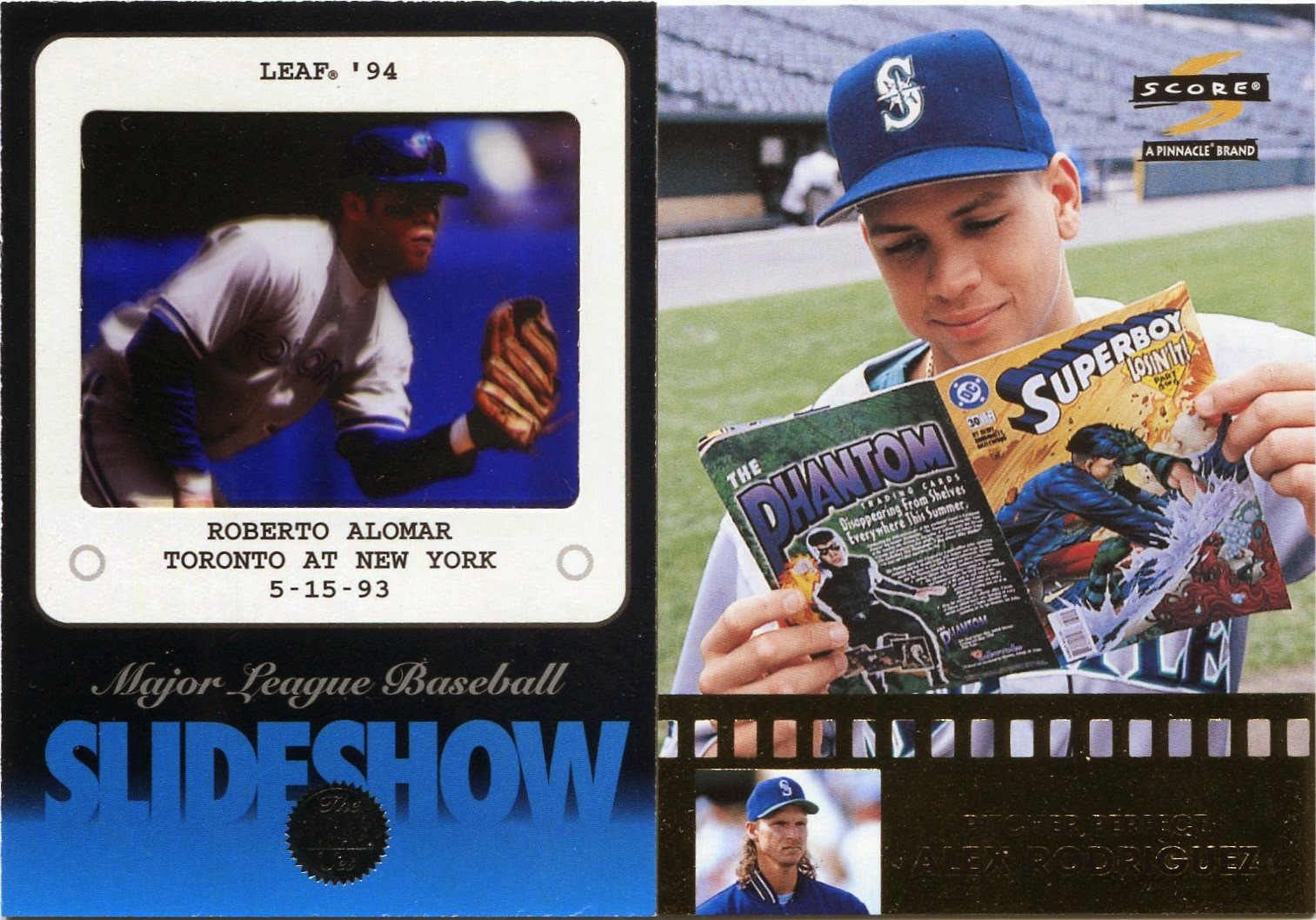 I can't remember exactly where, but I was just reading about those "Slideshow" inserts on another blog recently.

I do remember wondering why I hadn't found one for myself yet. Luckily, I didn't have to wait very long. That magnificent Robbie became mine for a mere quarter. The photo does look and feel like an actual film strip.

Normally, I wouldn't spend a dime on anything of Alex Rodriguez. Much less a whole quarter.

Let's be real, though.

That comic-themed insert was definitely worth a shiny Washington. 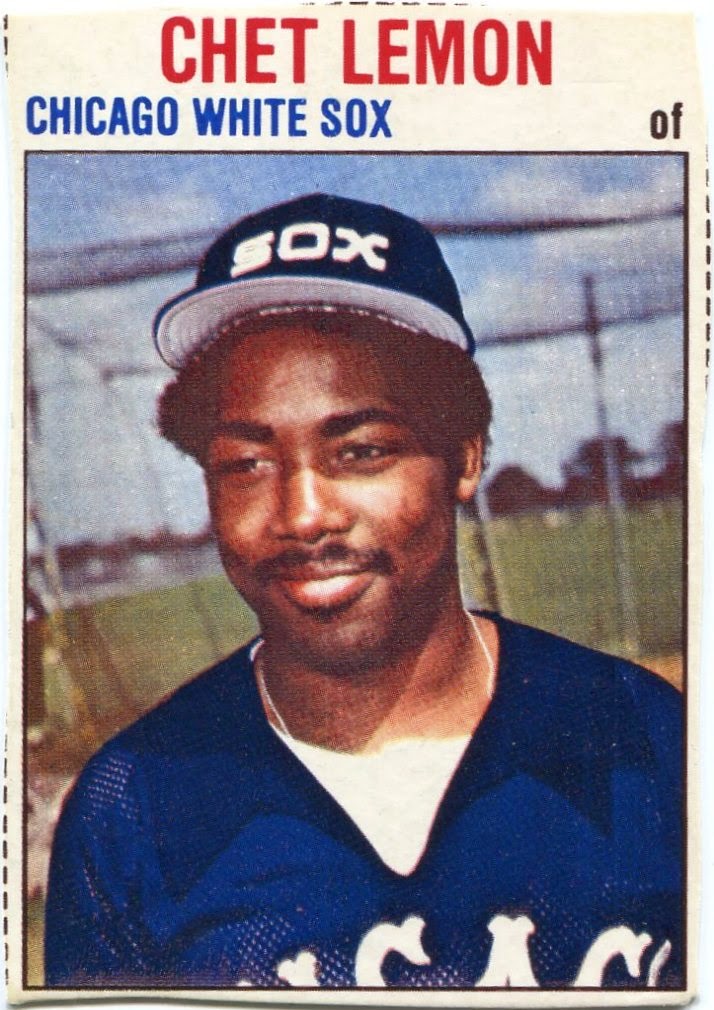 Who's the Hostess with the mostest?

You'll have a hard time sneaking anything Hostess-related past me for a quarter.

Much less one that features those awesomely bad '70s White Sox getups.

Let's move on to the dime boxes, shall we?

The sheer number of oddities this guy's dime bins continually produce floors me.

My oddball collection seems to double every time I hit the flea market. This past Sunday was no exception.

The front of this Matt Williams issue features one of those God-awful Circa designs. Upon further examination, however, I found that the thing was actually a sample. Better yet, it opened up to create a pretty darn cool oddball.

But Mr. Williams was far from the only one. 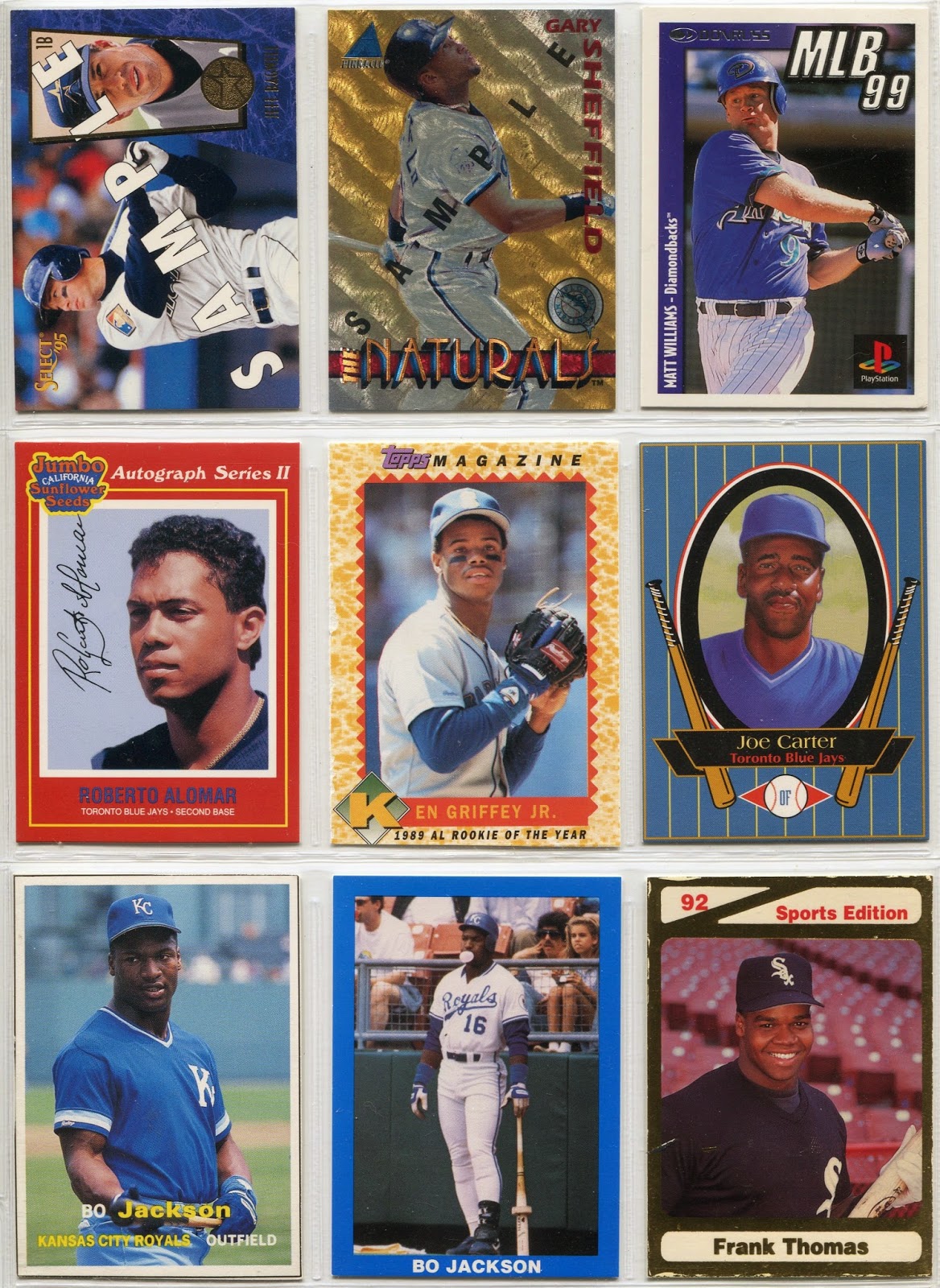 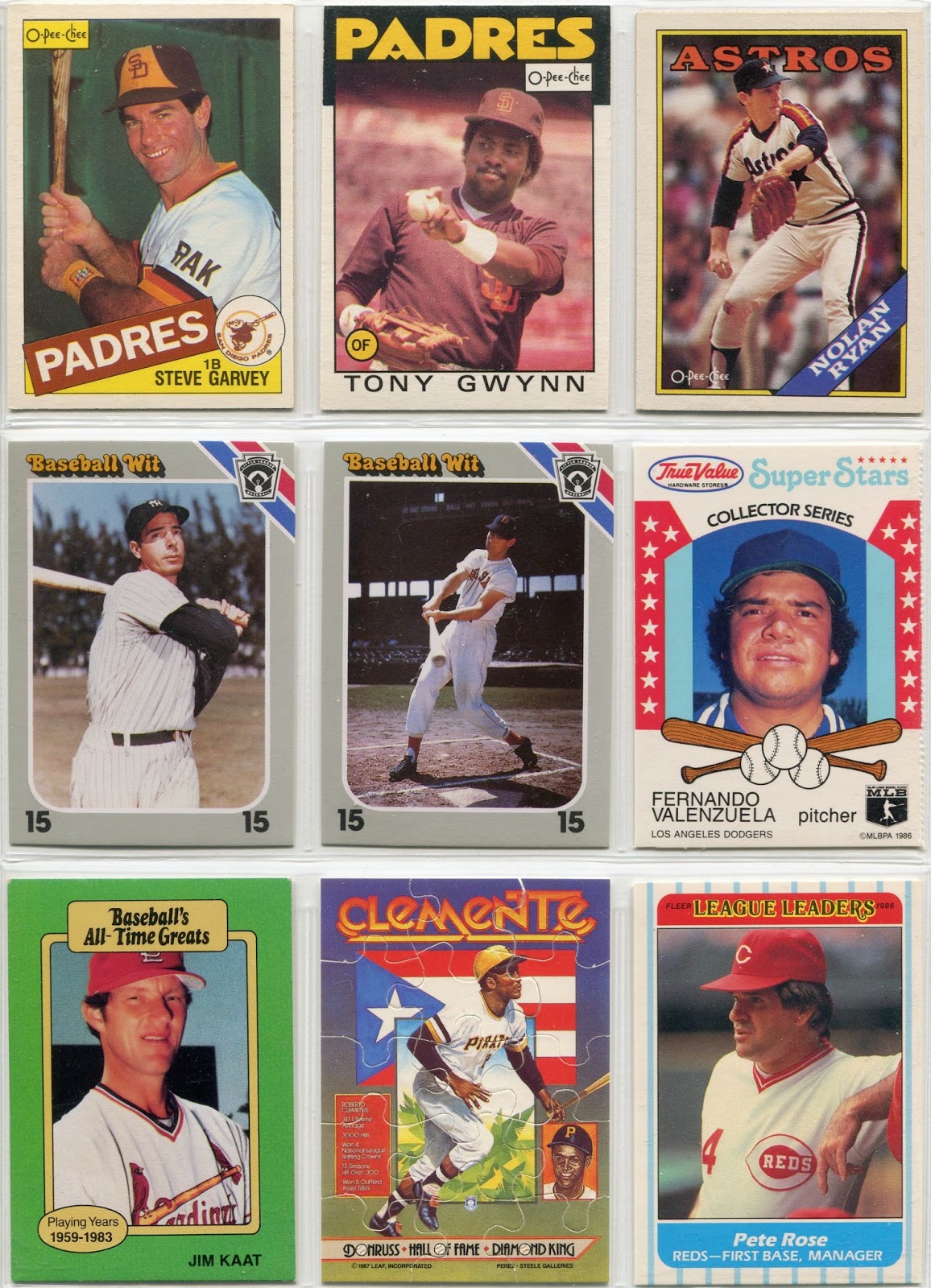 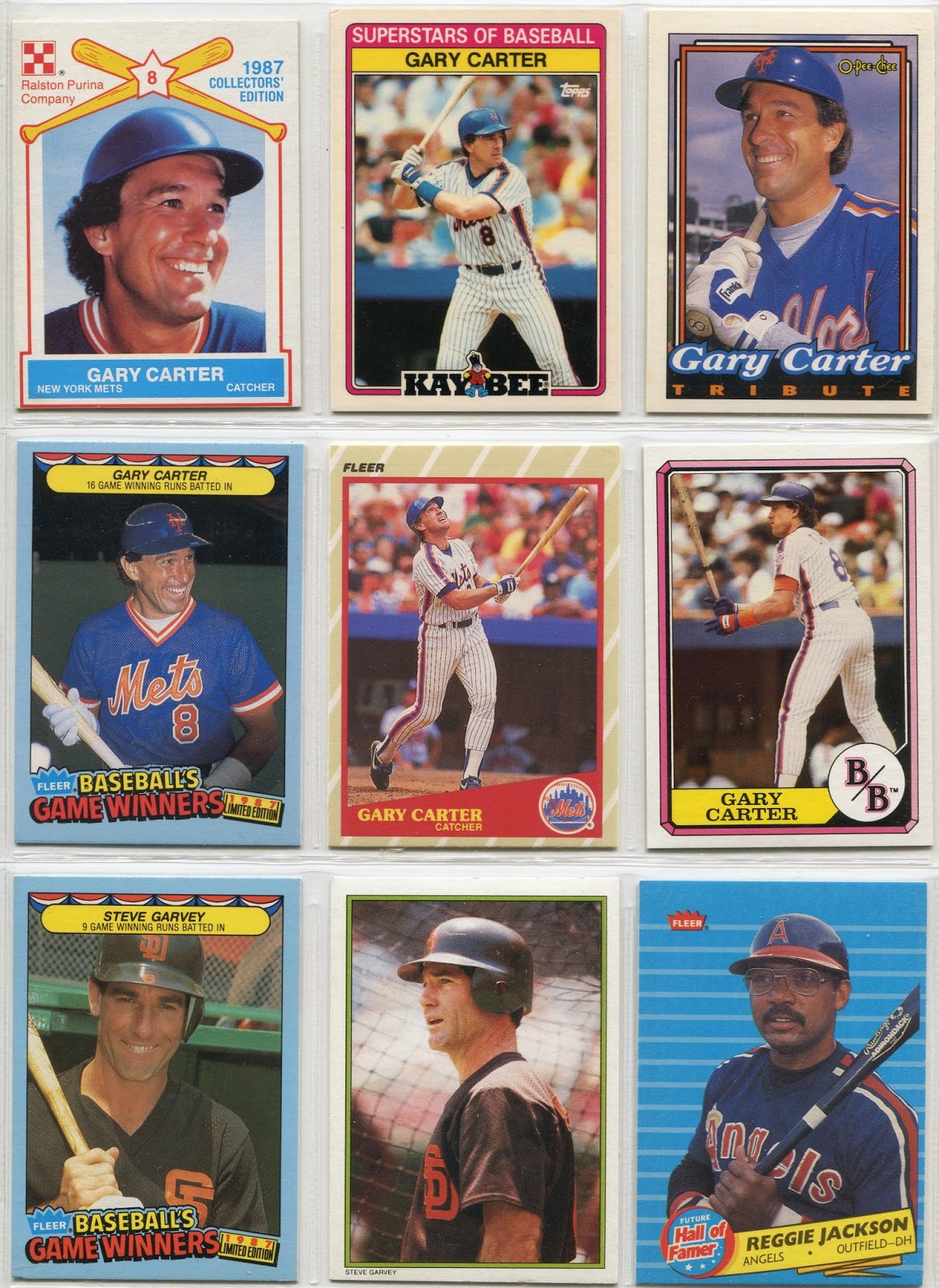 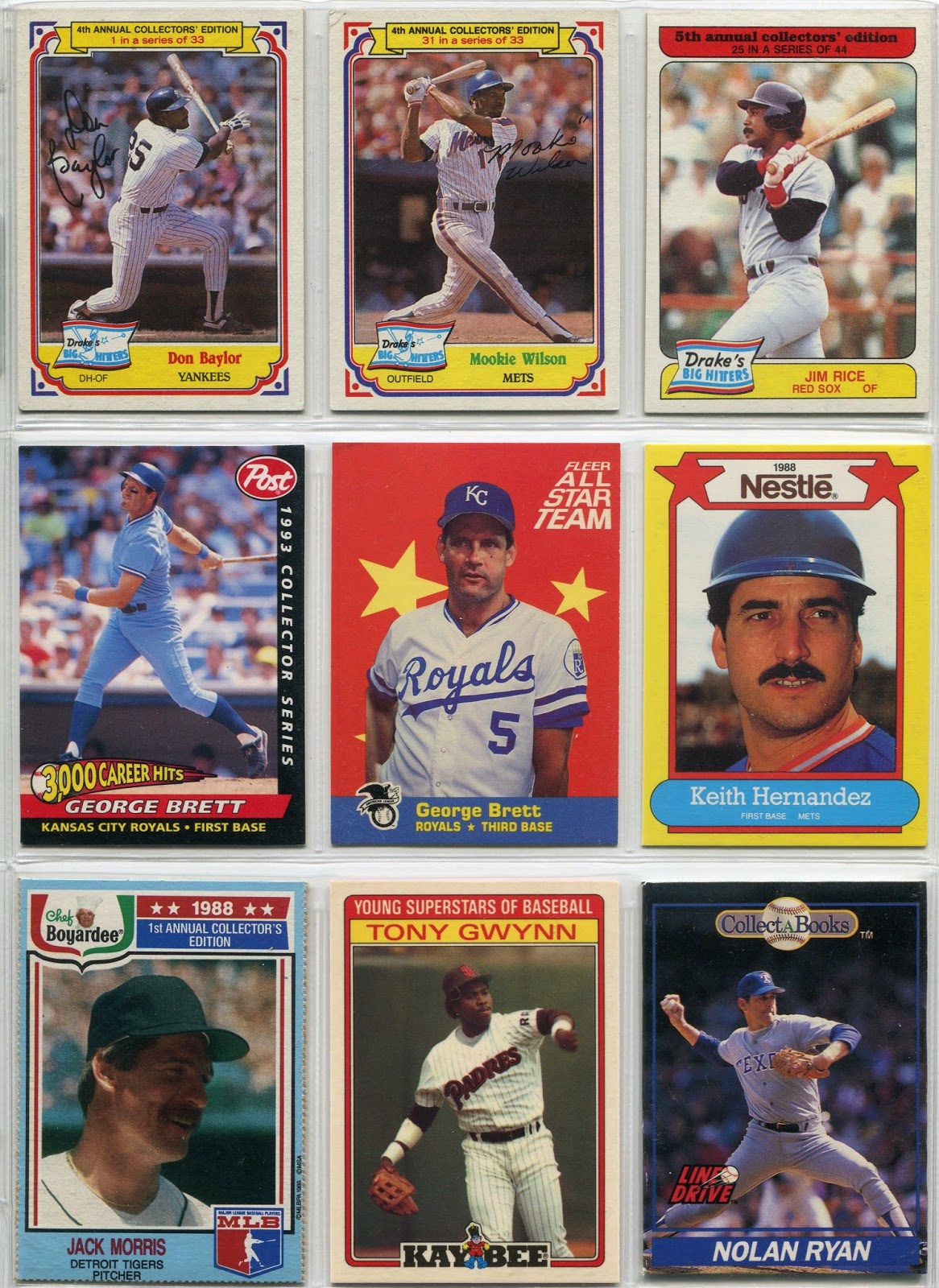 Yup, that's four pages full of oddities I scored on Sunday from just about every company imaginable.

The scary part is that these aren't even all of them.

It's like these dime boxes were created specifically for me. 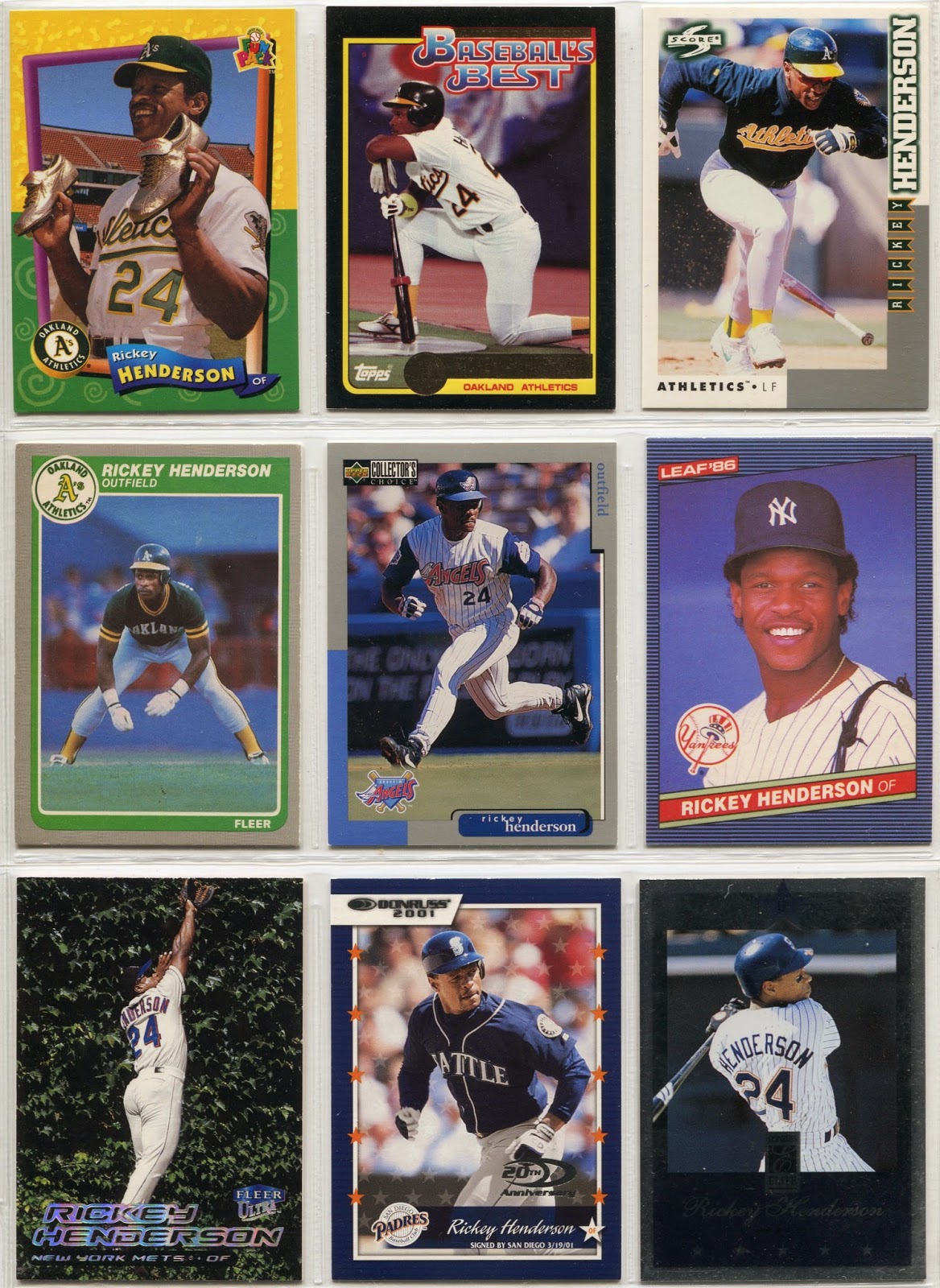 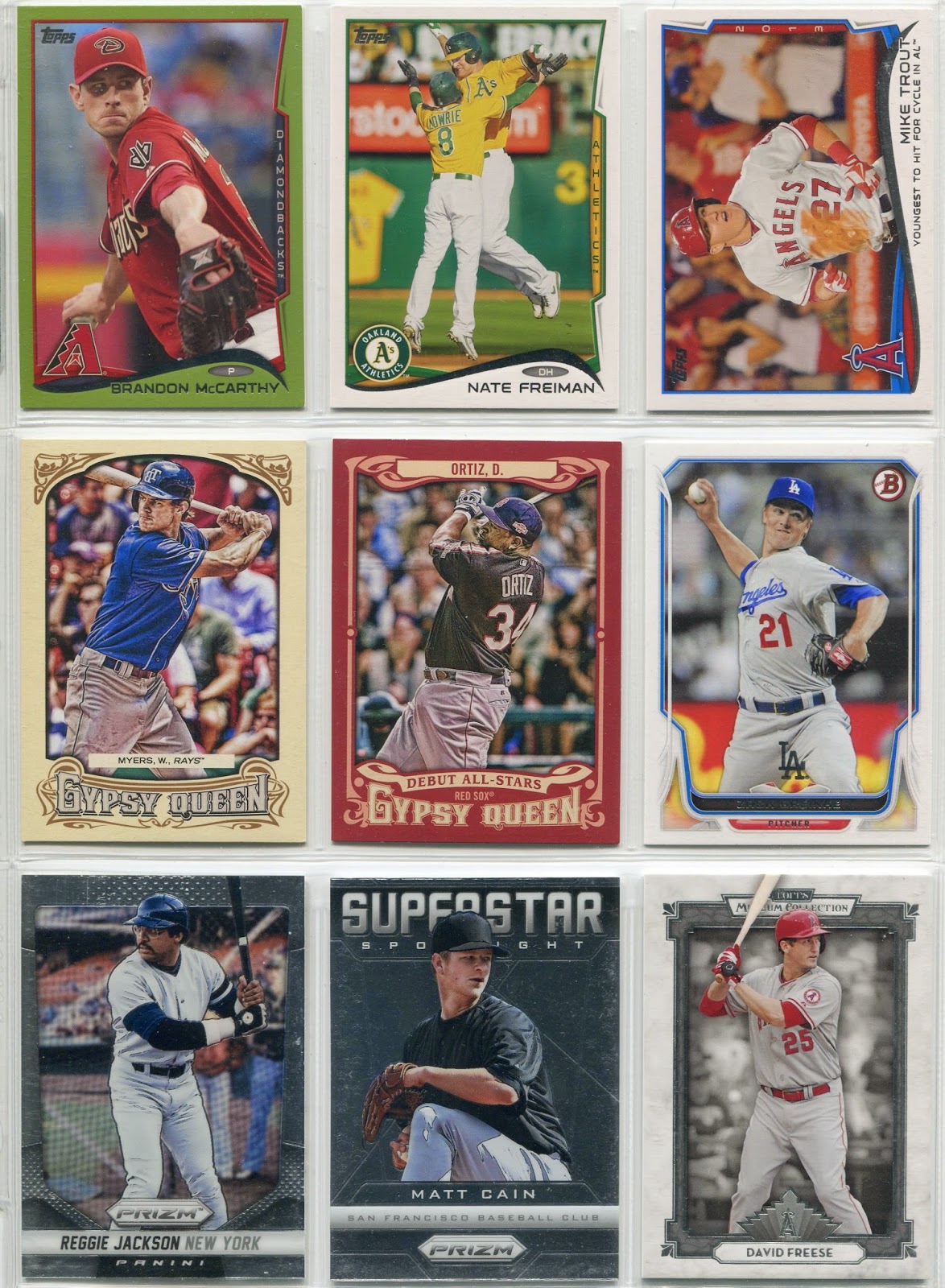 Putting a dent in some of my more recent needs was a goal I was hoping to accomplish on Sunday. In the end, I got that and a lot more.

I found a good chunk of my remaining Series 2 wants in the guy's dime boxes. He even threw in a couple parallels for good measure. Usual suspects like GQ and Bowman were included as well.

I also got my first look at 2014 Panini Prizm, a set which might as well be called Panini Pointless (or Pointlezz?) for all I care. Panini is good for a lot of things, but this isn't one of them. As much as I might bash it, though, I couldn't help but pick up a few. Don't ask me why.

A couple Topps Museum Collection singles made for some of the more surprising dime gets of the day. I'm not used to seeing such a high-end set at bargain-basement prices. 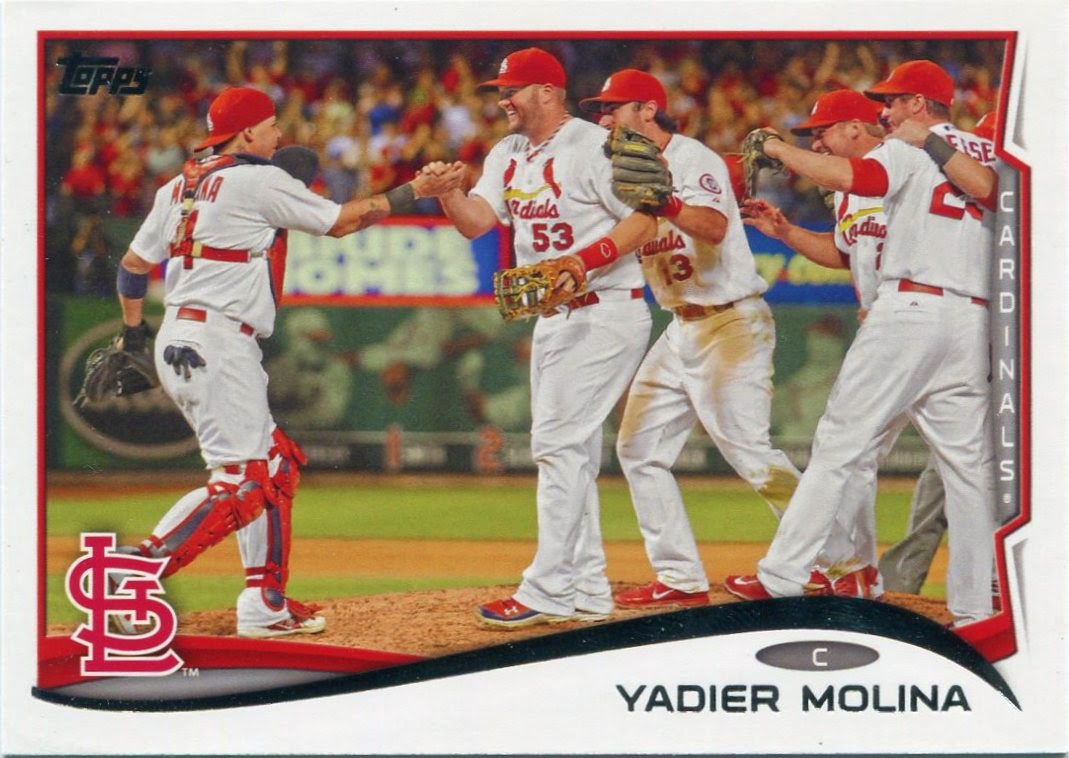 Astute collectors may note that this isn't the photo that appears on Molina's standard 2014 Topps card. That can only mean one thing, my friends.

This is a coveted short-print. And a pretty darn fine one, to boot. Certainly not anything I thought I'd ever dig up from a dime box.

It so perfectly sums up why I love going to the flea market every chance I get. There's no limit to what I can find.

Heck, the cards I showed tonight only account for half of the goodies.

Tune in next time to see what else the flea market gods had in store.
Posted by Nick at 7:12 PM

That is just excellent. It's why it always pays to talk to the guy or gal (but usually a guy) behind the table to get the good deals!

Nice scores...especially on those oddballs. But what's up with the flags in the first photo? Is that the finish line?

Man, those Gwynn's are so sweet! I think that you also posted scans of other cards, but those were the only ones I saw. I'm sure the rest were good too, so good pickups!

Congrats on finding the Yadi!

Great post and cards ! I plead guilty for the Slideshow, as I bought a few off Comc recently and posted about them.

The Bagwell Select Sample speaks to me. Don't know why...

Everybody deserves that 500th HR card of the Kid. Everybody!

I gotta go back soon. I went a couple weeks back with only an hour or so to kill and never found the dime boxes. There was a table with some nice high-end stuff, but I passed.