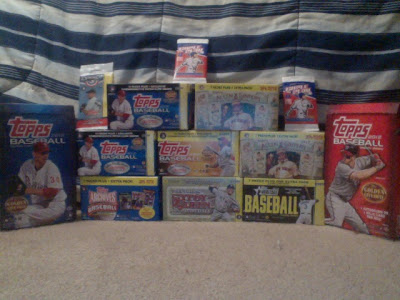 From what I can tell, the blogosphere has hit a bit of a lull.

I'm not sure if it's the same with other bloggers, but I've noticed a slight dip in readership and comments on this blog since the baseball season ended last week.

Of course, that's to be expected during a time like this.

Sure, I'll admit that my writing has not been quite as "inspired" since the World Series came to a close. My recent surge of post ideas has come to a bit of a stand-still.

Then again, I've learned that's its just another part of blogging. From time to time, you'll hit a fair share of valleys.

Because of this, I've found a "go-to" tactic to use in these situations, a way to get those creative juices flowing again.

Going in, I didn't think it would be all that difficult. I sure bought a whole lot more cards this year, which meant that I had a ton more to choose from. (Although I have to give a lot of credit to my dad's generosity on that front.)

However, picking my "top ten" proved to be a lot harder than I'd originally believed. While there were some no-brainers, it was no cakewalk. It pained me to leave a few terrific cards off the list. (Like this one.)

While it's next to impossible to have someone agree with me on all ten spots, I'm sure most people will acknowledge the greatness of at least a couple of these.

So, without further ado, I now present the "Dime Boxes" ten greatest cards of 2012. 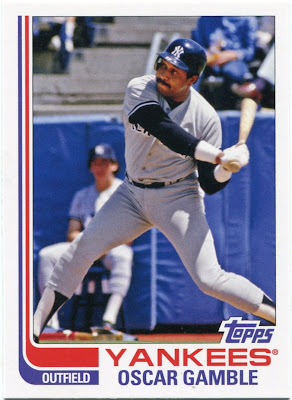 This one came close to not making the list at all.

In the end, though, I couldn't bring myself to cross this one out. As far as I know, Gamble's last card came in 2005. Something like this doesn't come along too often anymore.

On the whole, Archives was a fairly average set, with a few bright spots here or there.

Ironically, my favorite part about it were the short-prints.

Names like Gamble, Bake McBride, and Ed Kranepool just don't pop up that often in today's hobby. For me, the simple recognition of the "fan favorites" put cards like this Gamble over the top. 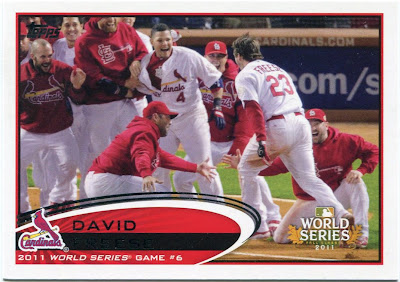 I've already mentioned why I love this one so much.

Any card that captures the finale of arguably the greatest game I've ever watched deserves a spot on this list.

Besides, this card single-handedly convinced me to "induct" David Freese into my binders.

That's got to mean something. 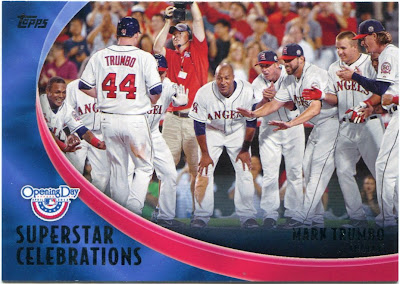 I've said it before, and I'll say it again.

These "Superstar Celebrations" inserts are the most underrated cards ever.

Because of its striking similarities to each year's flagship sets, Opening Day doesn't get a ton of recognition around the card community.

Which means that "masterpieces" like these are often overlooked.

It's no surprise that I'd never seen this card before a fellow blogger sent it my way.

I very nearly missed out on a terrific piece of ballpark "art". To get that many Angels throwback jerseys in one frame is nothing short of amazing.

I'm just glad it's in my collection. 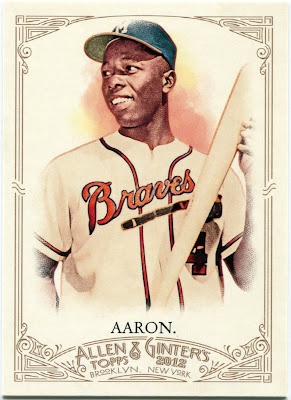 In terms of A&G's past releases, this year's edition was fairly unspectacular.

I'd probably rank it third or fourth in A&G's seven-year history.

However, Topps struck gold with Hank Aaron's card in the checklist. It feels like I'm looking at a "museum piece" whenever I pull this one out of my binders.

It's a whole lot more than "average", I'll tell you that. 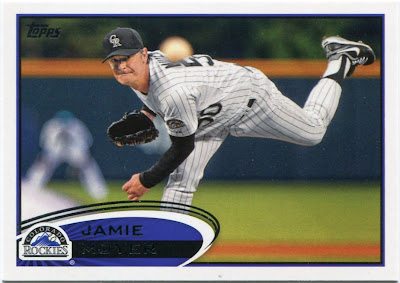 My thoughts on this card played a large role in me becoming a full-time "convert" to the blogosphere.

Before this year, I thought we'd seen the last of Jamie Moyer on cardboard.

But, at the ripe age of 49, he shocked all of us and actually made it onto the Rockies' opening day roster.

Moyer actually received two cards in this year's Update series, but this is far and away the better of the pair.

I probably would've liked almost any card that featured Jamie Moyer in a Colorado uniform, much less one with such a terrific action shot.

For all intensive purposes, it looks like this will indeed be Moyer's "sunset" issue.

If that proves to be the case, Topps certainly sent him out with a bang. 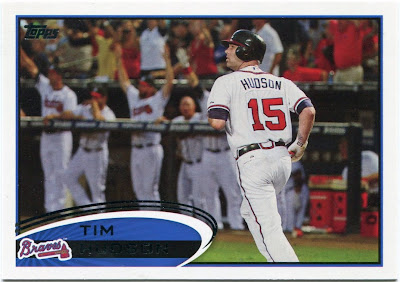 As many of my readers know, I'm a gigantic fan of "pitcher at the plate" cards.

This one is even more than that.

It's a "pitcher hitting a home run" card.

Big sluggers like Mike...I mean, Giancarlo Stanton and Jose Bautista get shots like these for their cards all the time.

Off the top of my head, this is the only example I can think of for a pitcher.

I'll still never understand why Topps changed it for his Opening Day issue, though. 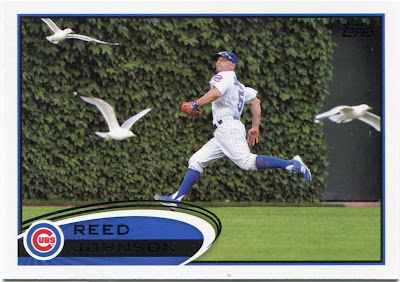 I came awfully close to putting this one in the top three.

The fact that Reed Johnson isn't yet in my binders probably had something to do with that.

This is the card that inspired me to start that little pile of miscellaneous "cool" cards I've mentioned a few times, ones that don't quite fit anywhere else in my collection.

Between Wrigley Field, the ivy, and the seagulls, this card has it all. 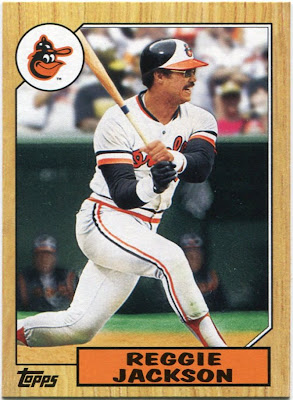 I actually didn't even know about this card until a few days ago.

When I originally saw it on the checklist, I figured it'd just be another card of Jackson as a Yankee or an Oakland A. Definitely something I'd like to have, but nothing I absolutely needed right that minute.

That changed when I found out it was a card of "Reggie" as a Baltimore Oriole.

Within seconds, I found myself purchasing it from Sportlots. It was pretty much a reflex, considering this is just the third card I own of Jackson with the O's.

Any card of "Mr. October" in Baltimore would've made it into the top ten. It was the '87 mini design that pushed it into the higher reaches of the list.

They're the best thing Topps has done all year. 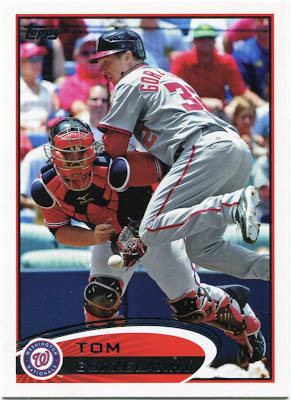 Topps certainly stepped up their game in the photography department this year, even if the design was a bit lacking.

This is the perfect example of that.

I've always been a fan of Tom Gorzelanny because he's an alum of a local junior college, one that I've stepped foot in on a couple occasions.

As most of us probably know, all "play at the plate" cards are awesome.

But a "play at the plate" that features a pitcher? And one of my favorite ones, at that?

I don't know if a proper adjective exists for this card.

"Awesome" doesn't even begin to describe it. 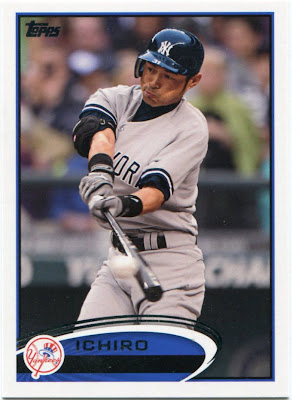 As shown by the Hudson and Gorzelanny cards, I'm all for great photography on baseball cards.

But, sometimes, a card is just "historic", regardless of the photo shown on the front.

From 2001 to early 2012, I'd accumulated over 400 different Ichiro cards. Base cards, inserts, parallels, you name it. They were all there.

And they all sat happily in my Mariners binder.

That changed once Ichiro was dealt to the Yankees in July. I knew it was only a matter of time before an Ichiro card would make its home outside of my M's binder.

Still, nothing could've prepared me for it.

Although I'd seen it around the blogs a few times before, I was shocked when I pulled it from my Update box. I couldn't fathom what I was holding.

A non-Mariners card of Ichiro.

I'm still having trouble believing it.

Even if Ichiro winds up playing for a few different teams down the road, this will always be that first one. The first card of a post-Seattle Ichiro.

The one that started it all.

Because of that, I'll always consider it to be an "iconic" piece of cardboard.

While it's certainly had its ups and downs, I still consider this past year of collecting a resounding success.

Even more than that, 2012 will always represent my first full year as a blogger.

That's what really made it special.
Posted by Nick at 6:52 PM

My vote is definitely for the Reed Johnson for Card of the Year. The Reggie is probably a close second though. I didn't know about that card at all.

You are probably being a little too generous with A&G though. I wouldn't rank it any higher than 5th or 6th out of the 7 so far. The landscape-oriented cards and the action shots are just awful for the most part.

Great list and you picked some amazing cards! I don't have that Reggie card yet for my set and this is my first look at it. It is AWESOME! I am going to have to pick up 2 copies.

I run a "best of" list, but it's at the end of the year. There's a couple you featured that you'll see in that list.

the oscar gamble card is great. that one's my fave.

I love the Reed Johnson card. At our last apartment in Chicago we lived across from Green Briar Park and we had our own version of the afternoon gulls only ours took over the park in the early morning.

Great list, Nick!
I have to give a mention to the Kyle Blanks card from Topps Series 1. That photo looks too good to be real! Also, the one downer on the Moyer card - it's one of the incredibly rare Topps cards that doesn't give a player's full career stats! I don't own it, but I've seen the back of it - I'm pretty sure Topps neglected to include his stats from 1986 - 1991! Blasphemy!
Nick J

You have 400 Ichiro cards in your Ms binder and 1 in your yankees binder. Why don't you just have an Ichiro binder?