Pen marks and mustaches (or, writing on baseball cards) 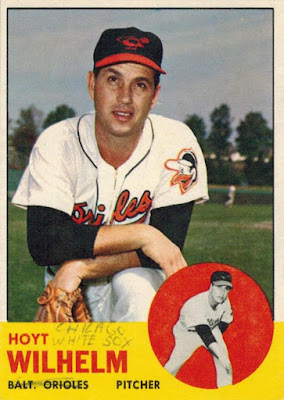 It's almost hard to believe that baseball cards were once regarded as items with no value further than the beauty in the eye of their beholders.
The cliche is, admittedly, true: the vintage era was a simpler time to collect baseball cards. Kids then would probably be as aghast about grading and toploaders as present-day investors would about flipping prized cards against brick walls. There's a reason most of the vintage I own is creased, battered, and generally look like they're 50, 60, 70 years old. Okay, yeah, they're cheaper (and I'm notably cheap) but it goes a little further than that -- they tell stories. So few places in life offer windows into a time well before one was born, and nothing does it quite the way cardboard does.
But I admit that even I have a tough time imagining a time when baseball cards were seen as so historically insignificant, so overlooked as heirlooms future generations might enjoy, that people actually wrote on them. 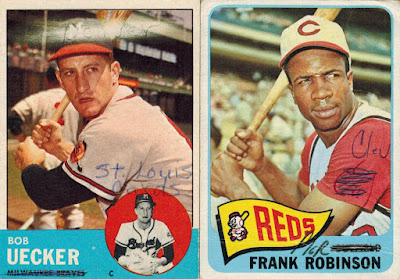 I have vague memories of writing on a few of my football and basketball cards as a kid -- mostly little talk bubbles filled with things an eight-year-old thought funny -- but even as lax as I am with condition, I wouldn't dream of writing on any of my cards now.
Even in terms of vintage, writing is something of a paradox for me: if I'm gonna buy a "damaged" card, I much prefer soft corners, creasing, pinholes, etc. to writing. But in terms of general allure, I find writing to be by far the most fascinating "defect" of all. I own quite a few cards with writing on them, and while I'd be open to having other copies, I've never really sought that hard to upgrade them. I think it has a lot to do with the fact that I'm so enthralled by the glimpses I get into their past owners.
The most common form of writing, I've found, is the transactional sort -- the collectors who, like me, find a certain pleasure in keeping up with the travels of their favorite players. Back then, though, kids had to manually update their cards, because it'd be years before any kind of Traded set came into existence.
These are a couple personal favorites in my collection -- especially the Frank Robinson, which was updated to reflect his later managerial stint with the Indians a full ten years after this card was issued (you can also notice scratched-out "LA" and "Cal." notations documenting his previous stops with the Dodgers and Angels). 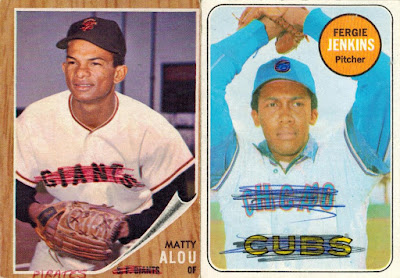 Some collectors went the extra mile and tried to eliminate any possible evidence of the past -- though in the case of Fergie Jenkins, I suppose it could've simply been an example of someone really not liking the Cubs. 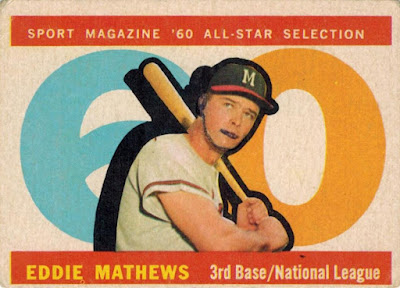 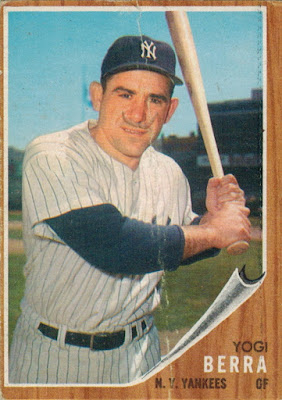 Many collectors, it seems, were obsessed with facial hair. 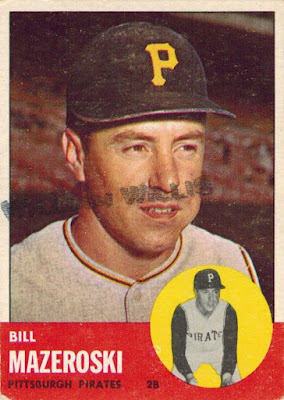 I see a lot of older books come through my job with people's names stamped inside, or, in some cases, even lavish specially-made bookplates affixed to the front page.
A few of my baseball cards feature those same kinds of custom touches, and I can't help but wonder when and why we stopped having stamps and stickers made with our names on them, because I know I'd sure like to have one. 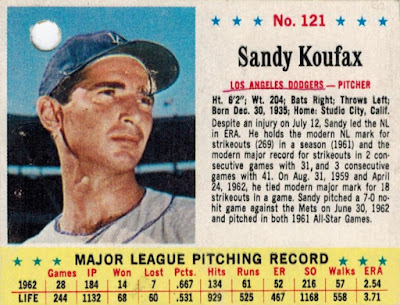 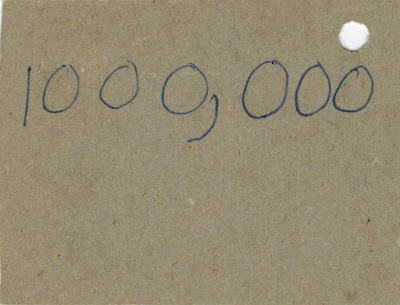 Often times, the collector took his pen to the other side of his baseball cards -- Post was a prime candidate since the backs are completely blank.
The front of this Post Sandy Koufax is obviously wounded enough, but that's before you flip it over and find the number "1,000,000" scrawled in a way that has always puzzled me -- is it an appraisal of future value? an aspiration? a secret code, etc., etc... 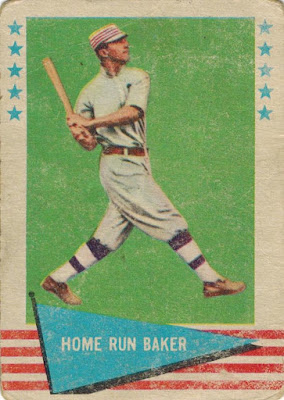 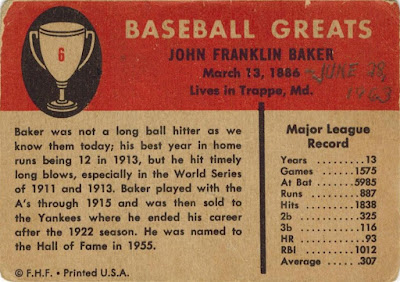 Some cards obviously belonged to devout baseball fans, including one who thought to pencil Home Run Baker's date of death onto this '61 Fleer Greats card issued a couple years prior. 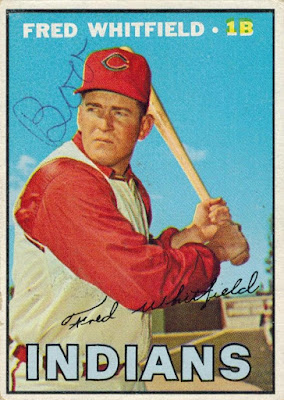 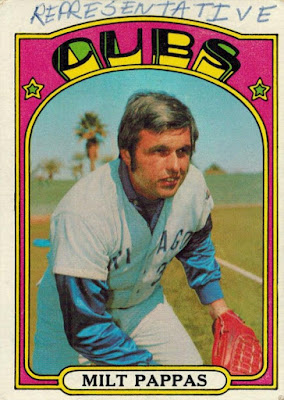 Others are more difficult to figure out -- I've owned this particular '72 Milt Pappas for as long as I can remember, and I've never bothered to upgrade it because I've never been able to pin down with absolute certainty why someone wrote REPRESENTATIVE along the top of it.
I've long assumed it's because Pappas was (possibly?) the Cubs' player rep in the early '70s, and if you want to go all Occam's Razor it seems like the most logical reason, but for some reason there's still something telling me that might not be right. 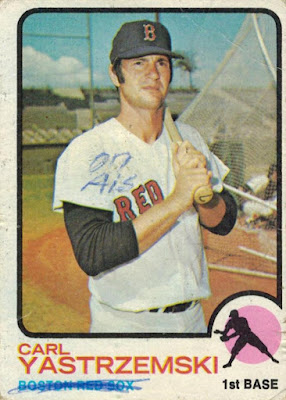 Unless I missed a major chapter of baseball history, Carl Yastrzemski isn't and was never affiliated with the A's organization.
So why, then, does my copy of his '73 Topps card have the Red Sox team notation scratched out, and the words "On Ais(A's?)" written in the middle of it? I have no idea, and the only one who does is that lone person somewhere out there in the universe, the person who once owned this card, wrote on it, and then left me to decipher their mystery. And didn't even leave a note.
These are the mysteries that permeate the weird corner of the baseball card universe that I find endlessly fascinating. It's hard to envision a time where cards relapse in significance and value so much that we'd start writing on them again. But in some ways I find a certain comfort in seeing pen marks on a few of the baseball cards in my binders. They're fun reminders that this hobby wasn't always taken so seriously, that cards were once seen as possessions with no future to speak of outside of the lives of their owners. It's nice to imagine.
Now, if you'll excuse me, I'm off to sell all these eBay 1/1s.
Posted by Nick at 6:02 PM

What a great post!..I love stuff like this (though I didnt do the updating teams for my cards,some of my friends did).. it's the exact same thing with records,lots of folks wrote their names on them because they were loaned out or taken to parties.. they LIVED!

I have a number of cards with writing on them too.

I have a lot of these too. I think they're great; happy to trade for any unwanted ones.

As someone who lived during the time when cards weren't taken so seriously, I did not write on a single card. Even as a youngster, there seemed something wrong about it.

I can't imagine doing this to a card. I did draw on a few faces in my old yearbooks, quite recently. lol. JK.

I love the ones that indicate the original owner was a true fan. DIY tradeds and adding the deceased date is fantastic. Less a fan of he vandalism for the sake of vandalizing. I wrote a similar post here but I didn't have as many samples as you. https://sabrbaseballcards.blog/2019/01/08/one-of-my-favorite-things/

Pappas was a player rep for every MLB team he played on - Orioles, Reds, Braves, and Cubs. There was a player strike at the beginning of the '72 season.

These cards may not make a set build or pc for some, but they are most definitely GREAT.

Great post Nick! It's all about a collector's point of view. There's a part of me that cringes when I see writing on cards... like that mustache on the Yogi. On the other hand, I enjoy collecting these pieces of history... and feel like a crease here, a pinhole there, and a mustache drawn there adds character to the card.

Those are some great defaced cards. I'm tempted to, when I clear off my post backlog, borrow your idea and display some of the written-on cards in my collection. They all have character. Though some of them do make me cringe a little.

I try not to acquire cards that have been written on, but do still appreciate them, and will always read posts about them. I have couple of 58's with someone's name stamped on them, and those I find very interesting. I keep thinking that someday a blogger will track down one of these former owners, and get one heck of a post out of it!