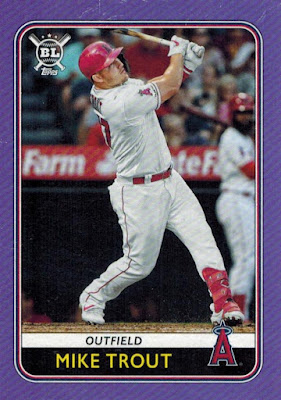 I can't tell you the exact moment I became a bad blogger, but I know I'm a bad blogger.
Why? Let's see: in 2020, I've averaged about one post a week, sent out a record-low number of trade packages, and have proceeded to be painfully slow to thank the people who have sent me cards. Add that up, and you have a very unworthy member of the blogging community. Needless to say, I'm quite thankful anyone still reads this blog since I've been MIA so often.
Not that I don't have my excuses. With card shows defunct for now, I haven't been able to build up my trade boxes as quickly as usual. But that's still isn't a cop-out for the extremely slim number of trade packages I've mailed out in 2020. Nevertheless, I'm building stacks for many of my regular trade partners and/or people who've sent me cards recently, that, with any luck, I'll have out before the year is up.
It's the least I could do for being a bad blogger. 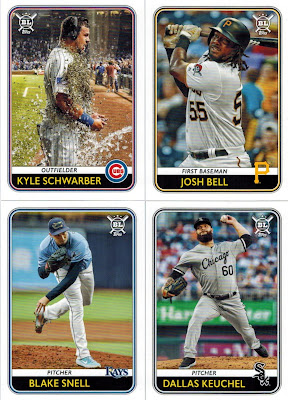 I've managed to accumulate a scary number of scans in my trade folder with cards I'm long overdue in doling out thanks for.
I'm ashamed to specifically note how long a lot of these cards have been sitting there, but let's just say that these -- which came from longtime friend of the blog Tom of "Waiting 'til Next Year" fame -- hit my doorstep not long after 2020 Big League came out (remember that?). Tom helped me out with a bunch of needs from the possible Set of the Year, including a messy thing of beauty with that Schwarber there.
Tom also sent along the Trout box-bottom at the top of this post, which was a real coup since the five or six blasters left at my Target at the time all had the Aristides Aquino cut-out card (guess he's not popular with the flippers). 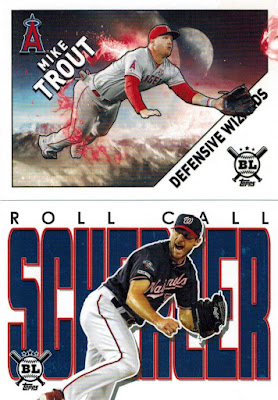 A couple Big League inserts from Tom, and a reminder of how great those Defensive Wizards inserts are. 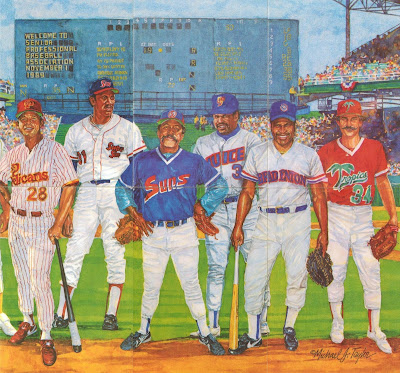 Tom also included this fun little throw-in -- not sure what set this comes from, but the backs of these cards make up a fine portrait of a few notable Senior League stars. 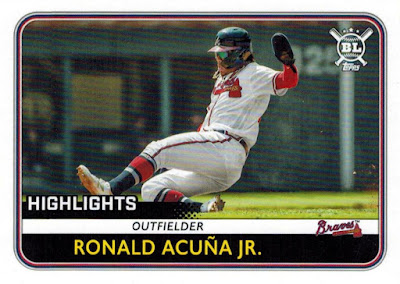 I'd swear that Topps prints Ronald Acuna cards in lesser quantities, because he always seems to be one of the last guys standing on a lot of my want lists.
As it was with my 2020 Big League needs, at least, until Mr. "Joe Shlabotnik" of "The Shlabotnik Report" was nice enough to pass this elusive Acuna on to me. 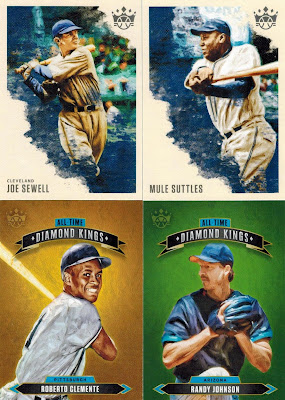 Against all odds, I actually bought a blaster of Diamond Kings earlier this year -- I don't regret the decision, but in the future I think I'll stick to getting them from secondhand sources, like these generous gifts from Mr. Shlabotnik.
I am, however, indebted to Diamond Kings for producing the only Negro League card I've seen all year with that excellent Mule Suttles. 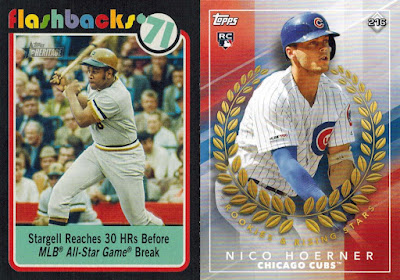 A few other 2020 cards from Mr. Shlabotnik -- and if your Target is anything like mine, there's still boxes and boxes of Topps Stickers left for the taking! 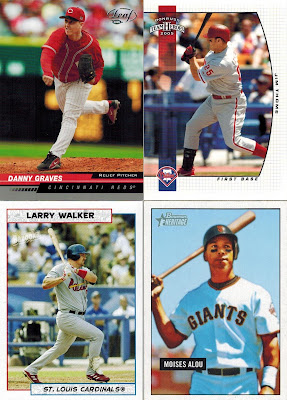 I also took "Joe" up on an offer to give a good home to some of his spare mid-2000s singles, since these are smack dab in the middle of when I started to get back into baseball cards as a teenager.
I don't collect all these guys, and I didn't even experience some of these sets in real time -- don't think I ever opened a pack of Donruss Team Heroes -- but seeing anything from those magical mid-aughts years always gives me the warm fuzzies. 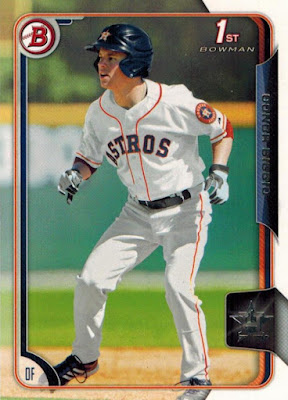 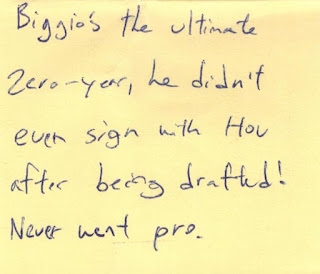 Zippy Zappy of "Torren' Up Cards" sent me a PWE a while back, and he made a convincing case for this being the "ultimate zero-year" card -- Conor Biggio (son of HOFer Craig) somehow managed to get a baseball card without ever signing a pro contract!
I understand part of Bowman's allure is to try and jump the gun on big prospects...but that still seems a tad extreme. 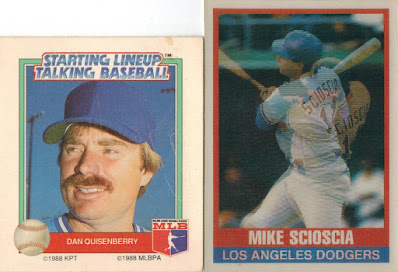 Mike Scioscia isn't high on my player-collection totem pole, but I couldn't resist claiming that one from a giveaway held by Chris of "The Collector" a while back -- I'm always a sucker for lenticular technology.
Plus he even threw in a few bonuses, like that excellent Starting Lineup oddball of player-turned-poet Dan Quisenberry which is just a tad too wide to slip into a standard nine-pocket page (rats!). 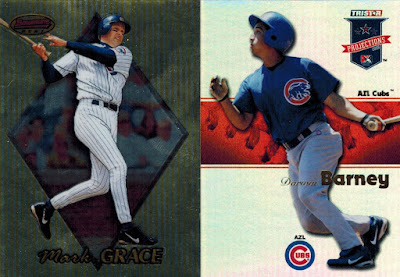 Our friend Mr. Fuji over at "The Chronicles of Fuji" recently offered up some free Cubs cards on his blog, and even though I've been a bad blogger, that apparently hasn't stopped me from claiming free stuff (*ducks under tomatoes thrown from audience*).
I get new Mark Grace cards often enough, but I can't remember the last time I added a Darwin Barney card to my binders -- part of the joy of collecting obscure dudes, I guess. 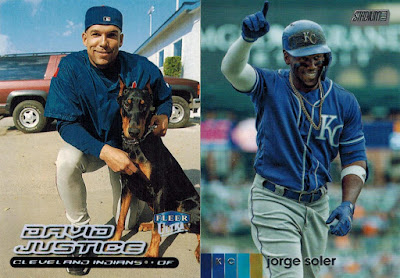 Jim of "cards as i see them" also dropped a PWE on me in the last few months -- sadly, I already had that Justice, but somehow I don't think I've ever shown it on the blog before, which seems egregious and in need of rectifying. 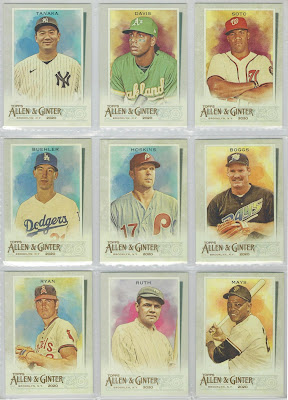 Greg of "The Collective Mind" was nice enough to knock out a bunch of my 2020 A&G needs, which'll save me a whole lot of money on packs (not that there's any left at any of the Targets around here anyways).
I understand it's probably not a popular opinion, but I want to see more Devil Rays Wade Boggs cards! 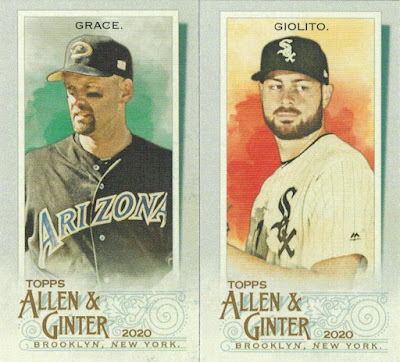 The same doesn't necessarily go for Diamondbacks Mark Grace cards, but nonetheless I couldn't help but request these spare minis Greg offered up. 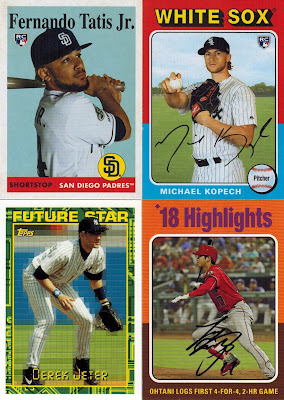 A nice thing happened one day after work a few weeks ago -- I found a package in the mail from someone I'd never once interacted with, someone I didn't know was secretly socking away cards for me.
A reader named Stuart (whose generosity I've since seen mentioned on a couple other blogs) sent me a whole bunch of cards off my various Topps Archives want lists -- including a Tatis rookie from last year's set, completely free of charge, which good luck convincing most collectors to do that. 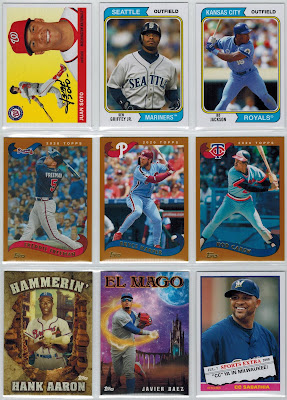 Specifically, Stuart whittled my 2020 Archives needs down to a select few -- he even sent along a few of those masterful nickname SPs, and a new CC Sabathia Brewers card(!). 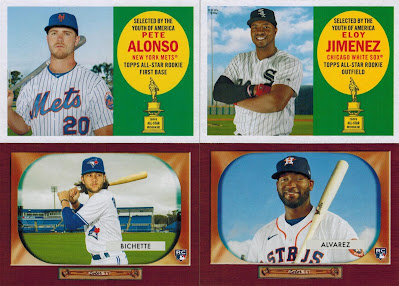 With the rookie bonanza abound in the hobby today, I didn't expect to see any of these 2020 Archives inserts to show up in my mailbox anytime soon -- the blogs never fail to surprise me. 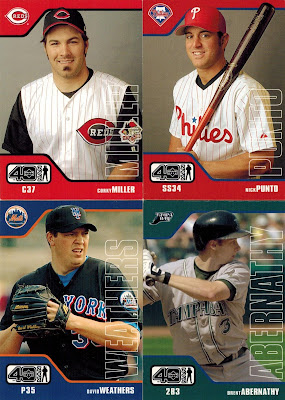 If I were to make a list of sets I never see in trade packages, Upper Deck 40-Man would be right near the top -- I don't think many people bought these at the time, and those who did probably locked them in their garage a long time ago.
So you an imagine how excited I was when Josh of "Royals and Randoms" fame sent me an entire stack of 40-Mans (40-Men?) not too long ago -- filled with weird guys I collect like Corky Miller and David Weathers who were otherwise all but ignored by the rest of the card industry. 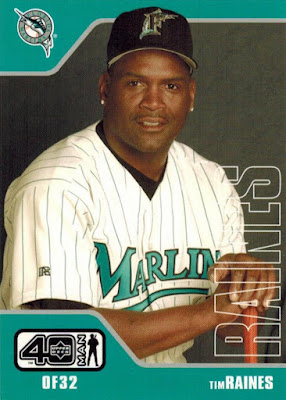 And what's this -- a new Marlins card of Tim Raines?!?!
Thank god Josh came along, because there's a good chance I could've gone the rest of my life without knowing this existed. Same goes for the vast majority of cards I've received during my time here. Josh and everyone else in this post are far better bloggers and/or readers than I am, because I haven't much taken the opportunity to spread the joy that so many of you have brought to me.
In this time of thanks, I thank you for reading, even if I'm not sure why you're still reading the words of yours truly, bad blogger extraordinaire.
Posted by Nick at 5:30 PM

Well that's a lot of cool stuff! Not bad for such a bad blogger, LOL.

Love the Archives cards! ...and give yourself a break ..but yeah,snap to it with those mailings,haha!

yeah what he said :)

That Senior League puzzle is awesome. I'll go through your A&G list to see if I can help you out.

You can't be a bad blogger. You're commenting on other blogs!

Nick:
You're quite welcome again glad you got the Archives I sent you. The Senior League cards are from the T&M Senior League Set I have a bunch of the 2002 UD 40 Man singles if you still need some ask GCA about the time we got in a bidding session on Ebay leading to a friendship as well some great card capades. I'll be looking forward to checking out your 2002 list soon & again hopefully when the pandemic goes away you can find some things from my lists.

I could have sworn you already wrote a post about the big league cards I sent. If nothing else, I'm about 99% sure you posted something on Twitter.
Either way, don't sweat it. I haven't been any better this year. You're still one of the best in the card blogging & trading game if you ask me.
FYI, I totally hear you about not being able to restock the trade boxes like in the past. The lack of shows hurts for sure, but trying to find retail around here is nearly impossible. You know, unless you want to go my LCS where you can get a retail blaster for $35. Not cool.

Seriously though, I feel like this post could've just as easily been about me, as I've been very bad (dare I say worse) when it comes to giving public thanks for all of the great things that people have been kind enough to send my way this year.

Found these 2020 A&G from your wantlist:

Not sure if you have any to spare, but I'm also building the 2020 set. Here's what I still need:

Everybody gets a pass this year...there are no bad bloggers!

you still post more often than me. lol. I'm just happy you are blogging! Now how about that Raines??? I don't ever recall seeing Timmy in a Marlins' uni.

Lots of great cards here. I love those Archives '55 Bowman rookies and the 40 Man Raines as a Marlin. Glad you could get all caught up, I know I always feel like I'm far behind in posting and commenting.

Yeah I've had a whole three posts since the first of September. Don't beat yourself up. Glad to help you out.